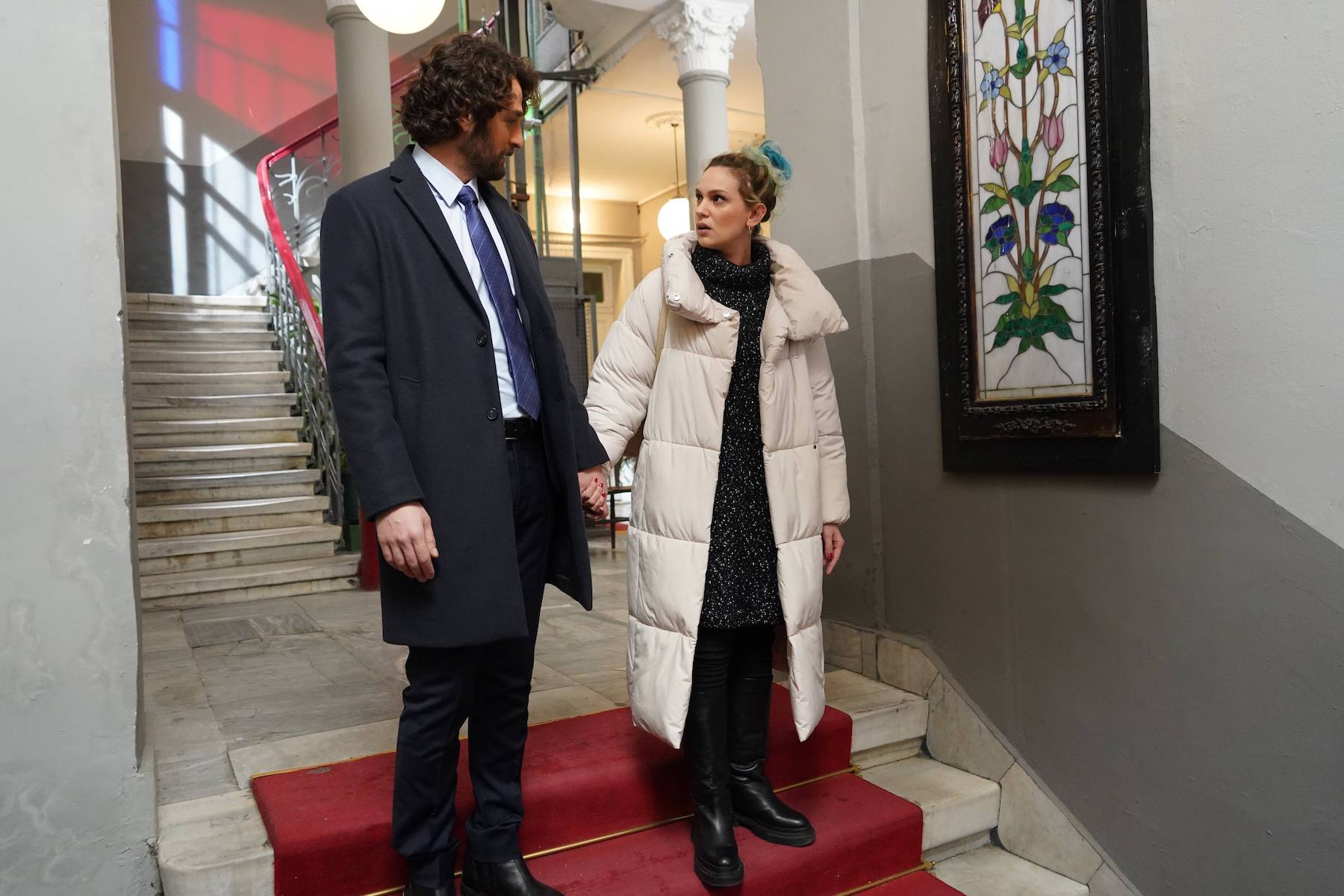 It couldn’t have gone worse. Or perhaps, it could have, but the way it went down was terrible. Although Han and Inci finally decide to tell their families (namely, Memduh Bey and Safiye) about their marriage, Safiye learns of their secret nuptials, first. To say that she was furious is to put it lightly. After destroying so many of the items in the terrace house, she barges into Inci’s home and shoves their wedding photo into Memduh Bey’s stunned hands. It was naive of Han to believe that Safiye or Inci’s grandfather would take this news well. Putting aside Memduh Bey’s dislike of Han (and it seems any man that Inci would see as a companion), he wanted to be there for her happiest day, and being uninvited to such an event hurt him deeply. However, if he were not so rigidly opposed to Inci’s relationships, and so afraid of abandonment, she may have been able to confide in him. So, while it makes sense that he should feel such acute pain now, he is also to blame for giving her such an unhappy ultimatum, by asking her to choose between himself and Han. If he can tease Ege about being in love with Neriman, why is it so difficult for him to accept Inci’s love for Han?

And, Safiye, blazing with fury, not only packs up all of Han’s stuff to hasten his departure after kicking him out, but spitefully says that he will return to her, when Inci leaves him. This seemed doubtful when she uttered these words, but considering the final scene, she may have been on point. Because for Han, his family, who was separated from him at such a young age, and his elder sister who was both mother and friend to him, are always at the forefront of his mind. He tells Esat that he didn’t break up with his ex-fiancee because of Safiye, but rather because he didn’t love her enough. Inci presents a different dilemma as they are already married, but he may follow the same course with her, as he tells Safiye that he won’t leave her, unilaterally deciding that he and Inci will live with the rest of the Derenoglu family. His high-handedness here may have been the last straw for Inci. Already somewhat fragile and lost after her grandfather disowned her, she was looking to Han as her family, and planning a happy future for them, alone. If she were not so distraught over her own woes, she may have noticed that Han was not actively consulting her on their future, but was rather biding time to announce his plans for them.

His plans, which Inci rightly points out, have from their inception been to have Inci live with him and his family in their home. She tearfully tells him that if she had known that this was his desire all along, then she would not have married him. And, as expected, when he feels threatened, he lashes out, cruelly telling her that his plan to have them live together has not hurt their relationship, as much as her decision to waste two years of her life with the drunken Uygar, implying that her lies destroyed their standing with her grandfather, preventing him from accepting them. They are both right and wrong in their own way, as their hasty decision to marry was not really the result of thoughtful discussion and consultation, and was more of a passion fueled jaunt to the altar. Had they paused, Inci may have realized the extent of Han’s attachment to his family, and Han may have realized that Inci would never willingly submit to anyone’s overbearing rules, be it her grandfather's or his. Perhaps, the more pressing issue is not what they could have done, but rather: if she does decide to leave him, will he let her go, and do we want him to?

Han’s departure strengthened Hasibe’s voice in Safiye’s mind. She tried to silence her, to not listen or respond to her, but Hasibe continued to fight for dominance. Unable to escape her, Safiye tried to physically remove her from the house, destroying all of the photos of her, begging for her father to save her, and finally hitting her head against the wall to try to exorcise her mother. She refused to stop until Han returned, holding her tenderly and promising to stay beside her, always. Safiye is one of the most complex characters that has been portrayed on screen, and Ezgi Mola perfectly captures all the various shades of her, elevating the very definition of excellence in her craft.

Before this however, Gulru appears at Safiye’s door, asking her to leave Naci alone and tell him to return to his child. We have only seen Gulru eyeing Naci in brief flashbacks, and as Safiye’s friend, but in these past two episodes her bitter anger has overtaken her entire persona. She says she understands that Naci loves Safiye, that he has never forgotten her and will never forget her, but she doesn’t actually. In fact, she is doing everything in her power, even using her daughter, to get Naci to return. And not only did she betray Safiye, she selfishly pursued Naci, refusing to see that she was vying for someone who belonged to another. This makes it difficult to empathize with her now because she willfully put herself between these two, on the one hand telling Safiye that Naci still cared for her, and on the other hand, seeking Naci for herself.

To be fair, Naci was a willing participant, and decided to marry Gulru, but he has been suffering since the moment he and Safiye broke up. And, now at the end of his life, he is trying to reconnect with the one woman whom he loved most. It’s heartbreaking to see their tragic love story play out in this way: what started out with so much promise and hope, is ending with so much strife and pain.

It makes Ege and Neriman’s track all the more enjoyable, as their story shows the very best parts of friendship and young love. The joy and calm that you feel just being in the company of the other person. Perhaps, Neriman said it best, when she told Ege that she feels that happiness when she watches the snow fall. Her smile at his response suggests that she may not be as oblivious about Ege’s feelings as she once was.

The fingerless man who lay crumpled on the floor provided some funny, light moments as Gulben and Safiye tried to determine whether he was dead, and whether he was dying in piecemeal fashion. Despite his weakened state, after Bayram helps revive him, he tries to flirt with Safiye! Haluk Bey is definetly becoming more and more despicable as this story progresses.

This episode definitely ended at a crossroads for most of our leads. With Inci and Han set to part and Han and Safiye set to reconcile, we are very much where we were at the end of the first episode, with Safiye preventing Inci from entering the building, and Han wanting to be with Inci, without leaving Safiye. The entire cast and crew deserve tremendous accolades for bringing us such a gripping thought-provoking drama, week after week. I expect the international community will be just as excited about broadcasting this dizi around the world.