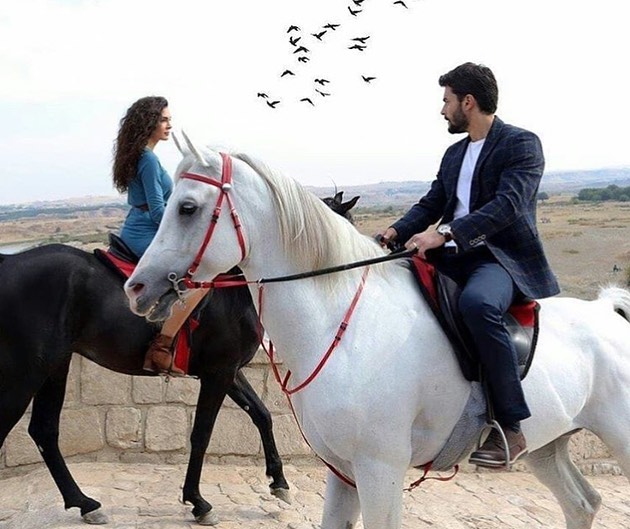 Well that was one hell of a kiss! If you haven’t seen the long version, you need to scroll down and watch it.  But read this review first.

Even though this episode was beautifully acted, beautifully written and beautifully filmed I was left feeling quite frustrated and impatient.  Don’t get me wrong, I loved the episode because I love the story.  But I fear the writers are taking us in circles, or worse, they are stalling.  The majority of the episode was spent unraveling Miran’s psyche, but in the end, it was still unclear whether there was any actual forward trajectory for Miran. At the end of the episode the audience is left wondering whether Miran will ever be able to change… It’s also very disappointing that as Reyyan’s character becomes stronger, Miran’s character begins to get weaker.  The confident and determined Miran of season one has been replaced by a lost, confused and uncertain man who lashes out at everyone at the slightest provocation.  Perhaps this is a temporary condition, but if that’s the case, it should be remedied sooner than later.  And the secrets surrounding Azize are starting to pile up.  So much so that it’s hard for the audience to follow. Something has to give, and soon!

Having said that, there were some picturesque and beautifully depicted scenes in the series. In particular those that delved into into the psyche of the long tormented Miran.  Reyyan’s probing of Miran’s emotions resembled what one might experience on a psychiatrist’s couch during psychoanalysis. Perhaps the production team has a therapist on retainer?

In this episode we witness the tug of war between Azize and Reyyan over Miran’s soul.  We see little of Azize together with Miran in this episode, but her presence for him is acute. Her words echo in his mind, his childhood memory of her cloud his heart.  While Reyyan’s constant presence is like a mirror in front of him, persistently showing him the alternative… the truth.

After Azize is caught redhanded by Miran, she cleverly pulls at Miran’s heartstrings. She knows his weakness well.  She tells him that she orchestrated the plan to separate him from Reyyan out of fear of losing him. She apologizes to Reyyan and begs Miran for forgiveness.  It is here that we see the extent of Azize’s power over Miran.  She has penetrated Miran’s psyche so deeply and so thoroughly that even this blatant deceptive act could be excused.  Even with the truth before him, he is ready to believe Azize’s “love” for him ( a sign that he is still a child seeking approval, yearning for love).

Even as Miran is willing to forgive, Reyyan is resolute in her condemnation.  Directly after the confrontation at the airport, Miran wanders the streets with Reyyan by his side. He is hurt and confused as he recalls the times in his childhood when his grandmother would heal his wounds, and would comfort him when he was scared.  Reyyan tells him that he should recognize her kindness to him, but he must not overlook her evil act.  She consoles him and comforts him, but she never gives in to his desire to excuse the act.  She tells him, “If your grandmother lied about this, could she not have lied about other things?”  Miran seems moved by her words, but sadly, only momentarily.

In one particularly brilliant scene, Azize (kudos to Ayda Aksel) who knows that she is being watched by Miran, goes to visit his parents graves. There she puts on such a show that even grumpy Nasuh would have been in tears. She tearfully begs the souls of her son and her daughter in law for forgiveness as Miran watches from a distance.  Her efforts are well worth it as Miran gullibly falls for her tricks once again.

Back at the Aslanbey mansion Reyyan begs Miran to not forget what he has seen.  She begs him to talk to her father to find out about the night of his parent’s death.  But Azize’s chokehold on Miran is so strong, he is so bound to her, that instead Miran goes to the Shadoglu farm and exposes to all the lies that he has been told about his parent’s death.

This battle over Miran’s soul continues throughout the episode with Reyyan making headway, but then losing ground as Azize’s lies echo in Miran’s mind.  As tiring and frustrating as this is for the audience watching, it is even more so for Miran, who by now is so confused, so distraught, that it is difficult to see how he will be able get out of this quagmire.

His dilemma is skillfully portrayed by the writers in a dream within a dream sequence, and even more skillfully acted by Akin Akinozu. In this scene, Miran, completely spent from his internal struggle, goes to the wedding cabin.  There, hurt and alone, he falls asleep to dreams and nightmares.  In his dream he sees Hazar taking his mother, and Azize taking Reyyan.  Frozen in his place, he screams out to both.  The symbolism is clear.  Reyyan’s influence is mounting but Azize’s hold is still strong.  He cannot move in either direction.  Neither can he move to avenge his mother, nor can he move to condemn his grandmother.  In the final scene of the episode we see this dilemma play out.  Here, Miran learns that Azize has packed her belongings and has gone back to Kars, presumably out of shame for what she did to Miran (though the audience knows better).  Reflexively he starts to run after her to bring her back, but is successfully stopped by Reyyan.

This episode also shows Reyyan’s complete dedication to Miran.  Besides the stunning scenes surrounding the epic kiss which she initiates, there is a lovely scene with the couple on the rooftop of the Aslanbey Mansion.  After Hazar’s failed attempt to prove the attack on Miran’s car was orchestrated by Azize, Reyyan explains to Miran his fear of facing the truth.  She explains that it’s easier to blame Hazar for everything wrong in his life than to face the truth that his grandmother might be lying to him.  She tells him he is afraid to accept the truth because if he does, it would mean that his vengeance on her and her family was wrong and baseless.  She tells him she knows this realization is frightening for him.  But that she loves him.  She always has and always will, regardless of what he believed when he targeted her for his misguided vengeance.

Other notes of interest:

Miran’s confrontation of Hazar at the Shadoglu farm has prodded Hazar to clear his name.  He calls Esma and tells her that if she does not help him, he will tell Miran that she has known the truth all these years.  Esma it seems has two letters from Dilshah.  One that tells of Miran’s paternity, and the other that makes it clear that Dilshah had trusted Hazar.  Esma gives the latter to Hazar to show to Miran.

We also see the continuation of the “unknown Aslanbey enemy” thread within the plot.  Someone is after Azize Aslanbey and they are not letting up.  Hazar’s investigation has turned up a man who is willing to swear that Azize was behind the attempt on Miran’s life.  But while at the Mansion, the man goes back on his word, and instead covertly hands Azize a note from her unknown enemy.  As this is the second reference to the enemy, it is clear that the enemy has some connection with Azize’s vengeance.

At the Shadoglu farm, Cihan and Handan set to work to convince Azat that he should marry Elif.  They explain to him that the way for Azat to protect Reyyan and his uncle, and indeed the entire Shadoglu family is to marry Elif.  For if he marries Elif, neither Miran nor Azize will touch him, and he will be close enough to Reyyan to protect her.  Interestingly enough, Azat does not seem averse to the idea so we may see a Shadoglu wedding in the near future.

The episode ends with Hazar going to the Aslanbey mansion late at night to show Miran the note.  There something happens and he is found unconscious, covered in blood with Miran standing over him.  We can anticipate that Miran will be blamed for this, and much chaos and yelling and crying will ensue.  I only hope that this is short-lived because viewer patience is running out. Will Hazar be able to show Miran the note?  Or will someone take the note before Hazar has a chance to do this and bring us back to square one? Will the writers use Hazar’s accident as a means to reveal Reyyan’s paternity? or will this be yet another lost opportunity.

Besides the minor revelations that have been made to the characters, little has been revealed to the audience about the real reason for this treacherous vengeance.  Yes, we know there was a fire.  Yes we know that Azize’s loss was great.  But how does Miran’s parents deaths fit with the fire at the farm so many years ago? Clearly it will not do to let the whole story out now, but 19 episodes in the series, we know little more information than we did when the series began.