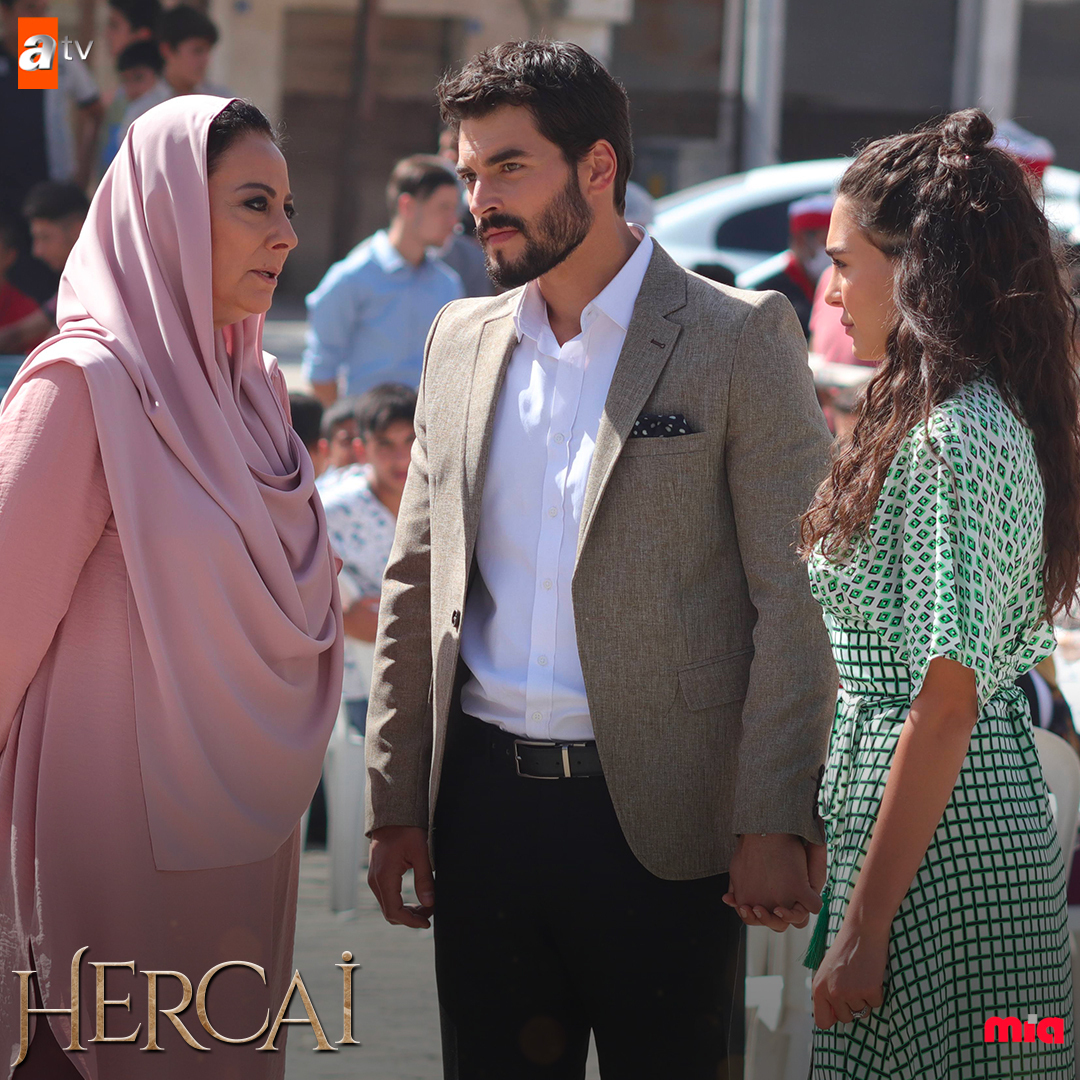 Just when I thought it couldn't get better, it did!

Let's just get one thing out of the way before I get started... There was no kiss or other physical intimacy in this episode either.  We in Hercailand have been waiting anxiously since the beginning of the season to see some signs of life, but once again, nothing. BUT... the loving looks are getting bolder and the hugs are now two sided.

However, despite the lack of physical intimacy, I have to say this was one of my favorite episodes this season, thus far. There were beautiful performances by all, but in particular by Serdar Ozer (Cihan), Ahmet Tansu Tasanlar (Azat), and Gulcin Hatihan (Handan) in a scene near the end of this episode. And more importantly we see the walls around Azize start to close in.  Her well thought out game is beginning to unravel.

Episode 5 of Season 2 starts out with Reyyan showing Azize a note given to her by her abductors (whose identity is still not revealed in this episode). The note says “It’s time for you to pay for all of your games and all of the victims of your games.” Azize is taken completely surprise which is a position she rarely finds herself in. She begins to suspect everyone around her and rightly so. Azat strong arms Elif into having Reyyan meet with him alone so that she can tell him the truth without any pressure from her husband and his grandmother. Reyyan is reluctant but tells Miran she wants to meet Azat. Miran is vehemently adamant that she will not meet with him, but in a series of beautifully depicted scenes, first with Elif and then with Reyyan, is convinced to allow her to go.

Azat and Reyyan meet in a public setting with all eyes of Midyat on them and there, Reyyan gently tells Azat of her love for Miran. We hope that this confrontation has finally delivered the desired message. Elif has really come into her own over the past two episodes and her maturity and character does not escape Azat. This meeting between Azat and Reyyan raises eyebrows and word gets to the Shadoglus and the Aslanbeys that the two have met.  All hell breaks loose at the Aslanbey mansion as Sultan and Azize confront Reyyan about this meeting.  They accuse her of secretly meeting with Azat and without Miran’s knowledge.  Much to everyone's surprise (including the audience), we find out that in fact Miran was fully aware of this meeting and indeed permitted it.

Meanwhile, Miran and Firat find someone who might be able to give them a clue to the identity of Reyyan’s abductors, but to no avail. There is an interesting interaction between Firat and the young man they are questioning which leaves one wondering whether Firat knows something he is not telling Miran. More on this later...

Gonul, frustrated by her failure in separating Miran and Reyyan, searches her Grandmother’s room and finds evidence that Firat is the adopted son of Esma, and not her biological son, as everyone believes. She wonders whether Firat can be her long lost brother. As do we.

We also learn a bit more about Esma in this episode. Apparently, Esma was close to Dilshah and complicit in Hazar's affair. She and Hazar meet secretly in the place that Hazar and Dilshah had met many years ago. Hazar asks Esma for help in getting Reyyan back, but Esma tells him, she cannot help him as she has to protect her own child. Interesting she does not say she has to protect her son, she says she has to protect her child. She does, however, promise that she will do everything she can to protect Reyyan. She also assures Hazar that Miran loves Reyyan and will never let harm come to her. More on this later...

When she returns to the Aslanbey mansion, Azize realizes that Esma has just returned from somewhere and begins to get suspicious. The walls are closing in around Azize as she no longer knows who to trust. A suspicious Azize is not a good thing.  How she will deal with those who suspects will be interesting to see. The episode ends with Miran taking his grandmother and his wife to Midyat square to show everyone that he is legally married, and that the marriage is supported by the elder in his family.

While we did not get the kiss we wanted between the two lovers, there was significant progress and growth in their relationship. Reyyan’s openness about meeting with Azat is refreshing, as compared to so many Turkish dramas where couples keep secrets from each other and act without telling their partners. Acting on Elif's advice, Reyyan explains the reason she wants to see Azat.  She tells Miran that he needs to trust her love. That she has put aside everything to be with him. But that she loves her family too, and she wants to make sure that her cousin, or Azat Abi, as she calls him, is at peace with her decision. She tells him that Azat is to her as Gonul is to him. Elif repeats the same words to Miran, explaining Azat’s desire to protect his cousin in the same way that Miran would protect Gonul. The writers beautifully present both Azat’s point of view and Reyyans point of view as it relates to Reyyan’s predicament. In one of the most powerful scenes of the episode, Miran, who is finally convinced of the appropriateness of Reyyan’s request, defends Reyyan’s actions before his disapproving family. He tells Reyyan in front of them that she is not obliged to explain herself to anyone other than to him, and that he only to her. With his action and statement he holds his wife above all, gives her the respect she deserves and squarely empowers her in the eyes of his family.

This episode also portrays beautifully Miran’s deep reverence for Reyyan. He reigns in his deep desire to be with her because he knows she is not ready. In one scene where she flinches as he comes near, he tells her with all sincerity “Neither in this house, nor anywhere else, will anything happen that you do not want. You can be sure that I will not touch you until you’re ready.” This implies that it will have to be Reyyan who makes the first move. And if this is the case, the audience will be in for a treat!

In another milestone reached, it seems as if Azat finally realizes the futility of his love for Reyyan. Azat had just returned from his meeting with Reyyan, devastated and drunk. After exchanging angry words with his parents he learns that he is to be a brother once again. And he learns that he now will be entrusted with the care of two siblings. His mother, Handan’s speech at this point is one of the most beautiful expressions of love I have heard from a mother to her son. She tells him that his heart may be burning, but that when she held him for the first time, her heart turned to ash. She implored him not to give up, and to live his life. And with tears in her eyes she told him that there is no greater love than the love of a mother for her child. With beautiful words she conveys to Azat that if she, whose heart is ash can live every day to see the next, that he whose heart is burning must do the same.

Cihan in his turn also makes a statement which startles Azat. Almost tenderly, he says “Live son. Live, so that you can love again. Live, so you learn what it is to be loved back.” This clearly strikes a chord with Azat since he realizes that indeed he does not know what it is like to be loved. Scenes such as these are emblematic of the richness of Hercai as a story. It is a love story, but in many ways it is more than a love story between a man and a woman, it is a love story between parents and children as well.

We still have no idea as to who kidnapped Reyyan, but if the sole purpose of her abduction was to deliver the note, and perhaps to distract from Azize’s plan to wipe out the Shadoglus on their farm, one can suspect Esma, or Firat. Firat seemed to have prior knowledge of the young man they were speaking with. Perhaps he set up the kidnapping to avert a disaster on the farm. Or could it perhaps be Esma, who we learn from Hazar was a one point a woman who could never close her eyes to injustice?

We still don’t know when many of the secrets will be revealed, but we can anticipate that Esma might have some hand in it. Why Esma is silent while she appears so sympathetic to Miran is unclear at this time. But perhaps Esma who is Azize’s trusted confidant, and who knows virtually every step that Azize has taken, has also taken precautions of her own. Perhaps Esma is biding her time, and building her own game. Not to get revenge but to finally get out from under Azize's death grip.

There are still many more questions than answers, but the questions in and of themselves are becoming more interesting, and much more focused.