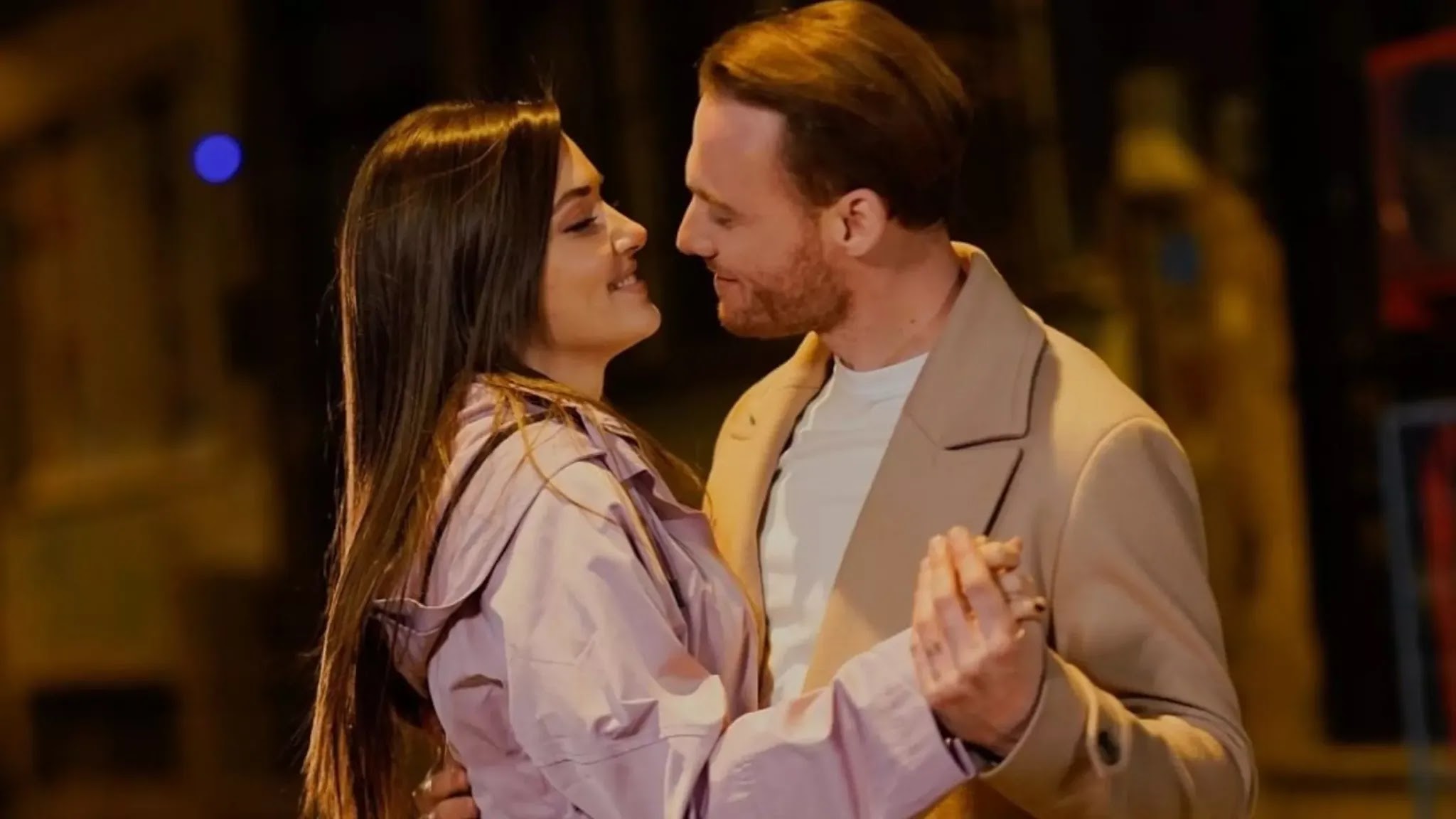 Whose nest is in a water'd shoot;

Whose boughs are bent with thickset fruit;

That paddles in a halcyon sea;

My heart is gladder than all these

Because my love is come to me.Christina Rossetti

The romcom has returned! This week we were treated to an episode that was fun, frothy, and funny, you know aside from Serkan’s brain tumour, which no one seems too concerned about because, hey, it’s a romcom. It was a very welcome break from the angst and desperation of the last few months of Sen Çal Kapimi. I am going to choose to have selective amnesia about episodes 30-34 and 36, okay?

The old, new writers are doing a reset of the show and what this week’s episode provided was an opportunity to just let the cast have some fun. There was no plot movement in the story but we didn’t mind because it was a goofy, fun episode to cleanse our palate. Eda and Serkan spent the whole episode together which is what we have been clamouring for, it doesn’t matter that they didn’t have any deep conversations or that he didn’t tell her of his health issues for this one episode. If this carries on for more than one episode then we have a problem, but for me, it was nice to just watch the cast enjoying themselves. With the news of a summer season for SÇK, it’s going to be interesting to see where they take the characters. I have more faith in this set of writers than I did in the last so hopefully, we will have a good mix of romance, comedy, and only the tiniest bit of drama to make things interesting.

Selin was found out right away, and Eda got to bring her to Serkan to confess her crimes. It was over entirely too quickly, and she got to just leave again without really getting her comeuppance, but given actress Bige Önal’s circumstances, I understand why they did it that way. And it’s par for the course with SÇK that no villain ever really gets what’s coming to them. I did like them showing Peril and Engin talking about Selin and Deniz so we can extrapolate from that that her social circle of friends will know that she’s a liar and a cheat and that’s something I guess.

Eda and Serkan played hooky from work and solved a ‘murder’. This has got to be all planned by Serkan, right? He was way too calm about having a gun pointed at him. Eda is playing along but she can’t believe that he’s shirking work to goof around. He’s trying to spend some happy time with her before telling her the news or maybe he’s just in denial.

Is Serkan trying to sabotage the deal with Kemal by putting Erdem in charge of hammering out the deal? Erdem, while he will never be a character I love, was funny as the ‘boss’, although I think I liked the other character's reactions to him the most. I think Melo is just going to snap one day and lock him in a closet. I still don’t get why they are pushing a romance between Erdem and Leyla, but what are you going to do.

Melo and Ferit got to play detective a little too and it was fun to see them share the screen. If he hadn’t already been paired with Selin and Ceren I would be rooting for a romance between them, they are the most consistent characters on the show and would be sweet together. It’s going to be interesting to see if Ferit and Ceren are ever a thing again.

Speaking of Ferit, I love that he’s the sane voice of reason for all the characters. This week he looked at Engin like he’s an idiot for not going with Piril for her doctor’s appointment. The single man knew well enough that it’s not something you miss and that Piril would never forgive Engin even if she said it was okay for him not to come. Piril’s rational and emotional sides are warring and she wants to just be ‘work, work, work’ but she’s having a baby and also wants he husband to be with her. Anyway, it’s so great that they have had Ferit be a consistently good person and the gentle kick in the butt that several characters have needed throughout the series. He’s an A+ human being.

Seyfi and Ayfer are there to push Aydan into not giving up on love. I want to be happy about the three of them being best friends, I really do. It’s just that Aydan and Ayfer come with so much negative baggage that’s hard to forget. Maybe in a few more episodes, I will expand my amnesia to forget what awful parents they were for their children and children-in-law, but for right now I still can’t redeem them in my mind. However, I appreciate the writing for them right now, it’s a good mix of comedy and friendship and it’s all I ever wanted for them in their original incarnations.

There isn’t much in this category that I haven’t stated in previous reviews. Selin is exposed but is allowed to just slink away like last time. I wanted her to be the one villain who suffered because of her deeds, and in a way she will, but I wanted to see that played out on the screen. It had to be so humiliating to have to confess, in front of Eda, that Serkan had never wanted to touch her, even before they got back to Istanbul and he had re-met Eda. This is the only outcome of that that would have been acceptable to the audience, in a romcom the romantic partners can not ‘cheat’ even with amnesia and I’m gratified that the writers made that poetically clear. So Selin now knows that not only does Serkan not love her when he’s in his right mind but doesn’t desire her when his brain is muddled either.

The Aydan and Kemal romance is coming out of left field a bit and I will be disappointed if she gets a happy ending before Melo, Ferit, Ceren, or Leyla. I know people will disagree but I think that Kemal is Serkan’s real father, and that’s going to be just as important to the plot as his love affair with Aydan. It’s going to be interesting to see how it all plays out but if he is it’s a way to create drama that Eda and Serkan can weather together.

We are heading into uncharted territory now with the news that Sen Çal Kapimi will take a hiatus and then continue into the summer. This is practically unheard of, the only other romantic comedies that did this that I know of were Erkenci Kuş and Kiralik Aşk. It speaks to the popularity of SÇK internationally that even though the Turkish ratings are low it is worthwhile for FOX to keep it going. I have no insight on all the factors that come into play when deciding that, but it seems that the social media blitz about the show lately and international sales of the series have led FOX to believe it’s profitable to keep airing it even if ratings are not great. It might also have something to do with Covid and not wanting to create new shows if they don’t have to.

If we could return to the storytelling and vibe of last summer’s episodes that would be fantastic, but without Ayşe Üner Kutlu that seems unlikely, however, the current set of writers led by Kerim Ceylan and Fikret Bekler, have written some great stuff for SÇK so let’s hope that they stay on and give us some fun summer episodes.

I’m unsure what to wish for other than Eda and Serkan not breaking up again! But I would like to see Eda graduate from university, for Melo to find her love, for Serkan to be healthy again, and for a good ending for this story. It’s been a wild ride lately watching Sen Çal Kapimi, and there have been a few moments when I wondered if it was worth it to keep watching, but the cast is so great, there are still interesting things that could come in the story and I want to see how it all ends for Eda and Serkan. If you’re still reading these reviews you’re liking feeling the same so we will continue in our Sen Çal Kapimi journey together and see what this little dizi that could brings us next.

Raise me a dais of silk and down;

Hang it with vair and purple dyes;

Carve it in doves and pomegranates

And peacocks with a hundred eyes;

Work it in gold and silver grapes,

In leaves and silver fleurs-de-lys;

Because the birthday of my life

Is come, my love is come to me.Christina Rossetti