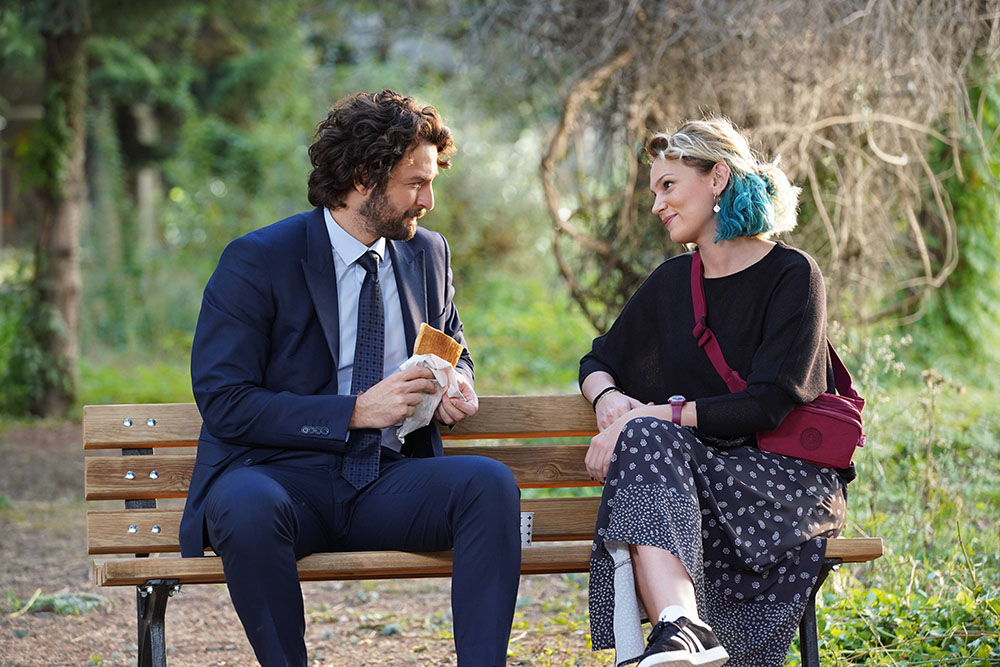 The following discussion contains spoilers from Episode 4 of Masumlar Apartmani.

His proposal by the seaside was interrupted by an urgent visit to the hospital, so our favorite tin soldier issues a second offer to his angel. With candles and pillows on the terrace, a hopeful and determined Han confesses to Inci, telling her that the few days that he has known her have transformed him, endowing him with such joy that he has even been smiling at strangers on the street. He must marry her, he says. But, Inci, despite wanting to tell him evet a few times over, is not willing to go against her grandfather, yet. Memduh Bey has decided that she and Ege will not only be moving to another residence, but will be leaving the city. She had only come to the terrace to bid him farewell; and so, she leaves him once more, with a bittersweet veda.

In the hours that follow, Han is reminded of his first meeting with Inci, when she was running from Uygar’s proposal. Han had told her then that a proposal of marriage is an offer, and she was not obligated to accept, just because she was asked; if she truly did not want to marry, then refusal was not only warranted but also mandatory. Of course, when Han had spoken these wise words, the suitor in question was Uygar.

To his credit, Han does try to accept her refusal, until Esra and Esmat encourage him to ask for her hand once more. So, he does. Emboldened by her mother’s words, Inci finally says evet to him as she has been longing to do for some time.

The wedding, arkadaslar, was splendid. The slow fade to black and white, gave their romance a timeless sophistication and grace, making the entire scene - enchanting and elegant.

Elsewhere, the episode was also laden with some heartbreak as we watched Gulben walk out of the office, after having witnessed what she believed was a newly affianced Esmat. The words that Safiye has been telling her repeatedly: that she has no value, no worth, and that people will only stare and laugh at her, seemed to ring true as she slowly made her way out of the office, to the car. The joyful and bold Gulben, who took such care to dress that morning, awaking with dry sheets, returned home, defeated and humiliated.

When Gulben later comments that Esra is too old for Esmat, Han seems to understand that perhaps she has feelings for Esmat. Ever the supportive brother, Han says that if she likes someone, it is cok normal, seeking to lift her spirits. Gulben, similar to the young Safiye, before she left school and became permanently confined to the home, was dreaming of a change, a better situation - believing that one day, she would leave and go to a home of her own. Although, it is still too early to root for a romantic pairing between Gulben and Esmat, I sincerely hope that this excursion will not conclude Gulben’s efforts to seek out positive change for herself.

And, to Hikmet Bey - I must say: Gulben will not be bored in the office; she can meaningfully contribute outside of the home. Yaziklar olsun for willfully blinding yourself to her shining potential.

A few key reveals were made in this episode; the most notable was that Ege has been in contact with their father. Although Inci has no knowledge of their meeting, when considering their mother's words, their father’s regret over lost time, and Memduh Bey’s stubborn temperament, it seems that an agreement was made long ago, at the time of their mother’s death, forcing their father to abandon them. Despite their many differences, one similarity between Safiye and Memduh Bey is that they both love their families with the same overbearing control, desperately trying to hide their fear of being abandoned.

Hikmet Bey was on point when he informed Han that Safiye is not cleaning the dirt or wiping away grime; she has been trying to cleanse the pain within herself. This statement not only sheds additional light on the complexities of Safiye’s character, but also more broadly suggests that the notion of cleaning and being cleansed is a universal goal that many strive towards in a desperate bid to rid themselves of painful experiences, unwanted memories and concealed traumas. If only the bright, studious, young Safiye, who wanted to become a doctor, could return once more; perhaps, she would find that some of her long-forgotten dreams can still come true.

A few scenes inspired some curiosity over upcoming plot points. A glance was exchanged between Esra and her boss, when he is on the balcony above and Esra is standing beside Inci below, suggesting that there may be more to this relationship. Similarly, Bekir Abi, always appears ready to help and take care of Safiye and Gulben, at a moment’s notice. I wonder whether we will learn more about him as the story progresses.

A gentle criticism of the ruse that Esra, Esmat and Han put together to invite Inci to the wedding. This dizi is filled to the brim with obstacles; there is no need to fabricate more health-related crises.

This episode was a bit slower than the first three, but that is to be expected as Han and Inci are no longer able to confine their elation for one other in a bubble. Practical realities have intruded, and since parting is unbearable, they may find that matrimony may shield them against the strongest opposition. Here’s hoping.