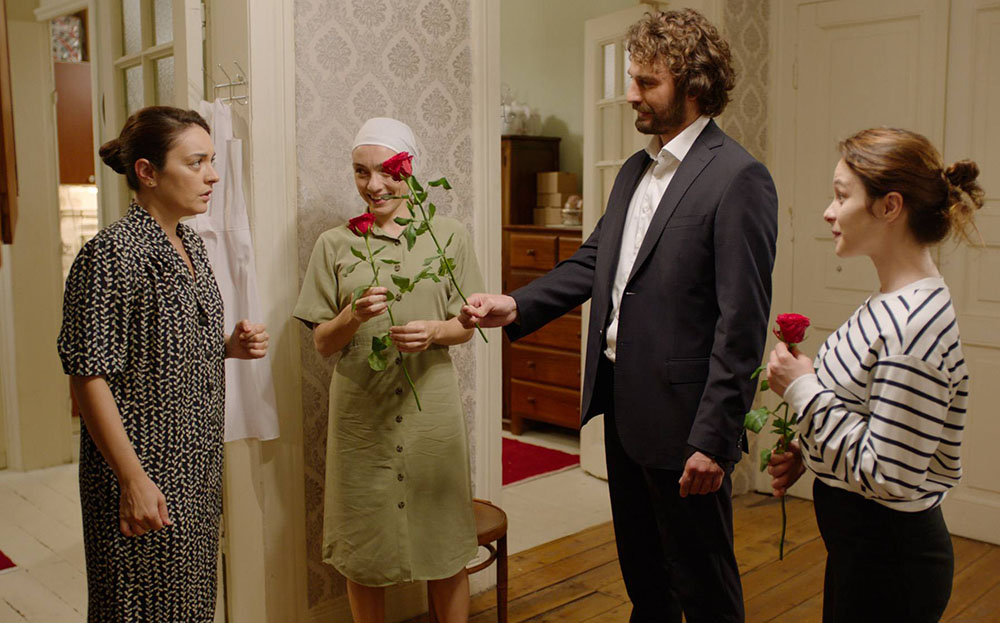 Please note that the following discussion contains spoilers from Episode 2 of Masumlar Apartmani.

As Han and Inci both look upon one another with surprise at having met once more, at the front of the apartment building, Safiye continues to insult Inci and her family. Despite being deeply offended by Safiye’s words and hurt by learning the truth about Inci’s whereabouts of the past night, Inci’s grandfather allows Han to help them move into their apartment suite. He strongly discourages Inci and Han from seeing one another, but Han and ‘his angel’ cannot seem to stay apart. Together, they buy simit and newspapers, drink çayı, and help the drunken Uygar find a taxi cab in the middle of the night. Having forgotten her keys, Inci accepts Han’s offer to sleep in his apartment suite, which he assures her is upstairs, and will not alert his sisters, to her presence. However, at first light the following morning, Safiye decides to check on Han. The episode ends just as she is slowly walking towards his bedroom.

The dialogues and interactions between Han and Inci are incredibly delightful and heartwarming. They have only known each other for two days, but they are both enchanted in the most wonderful way. When Inci caresses his face, and he leans into her hand, the yearning and hunger that has accrued over their past years of self-imposed isolation, her from not letting herself love, and him from not letting himself live, is truly captivating.

The sparkle that was long absent from Han’s eyes has returned, and Inci is positively brimming with joy. She seeks him out, despite knowing that her grandfather is firmly against him, and makes a hushed and hurried confession to Esra: telling her that she has fallen in love with Han and, later that he is interested in pursuing a relationship with her.

Her feelings are mirrored by Han’s, but he does not come to the same conclusion, quite as quickly. He confides in Esmat that he does not know why his throat burns, his stomach flutters, and he feels altogether different somehow. Overwhelmed and unsure of what has happened to him, Han does not immediately confirm Esmat’s assertion that he has fallen deeply in love with Inci; however, when he repeatedly asks her over çayı whether she and Uygar have permanently broken up, and insists that she must tell him if she intends to return to Uygar because he needs to know - it is clear that he has realized the depth and power of his love for her. Perhaps, Han described it best when he told her that he feels of her as he did about his favorite toy as a child: he wants to hide her, protect her, and keep her safe - to which she replies with a smile: hide me, then.

Though we saw shades of this tension in the last episode, the toll that life has taken on Neriman was painfully clear in this second bolum. She has resorted to self-harm to cope with her despair. Venturing into the downstairs apartment to retrieve Safiye’s garment that has fallen below, Inci’s brother, Ege, offers Neriman a sumptuous treat, in the form of a piece of chocolate cake. Standing still in the doorway, she is confounded: should she eat this delicious treat that has appeared in front of her? Or, should she abstain because of the ‘dirt’ that may be baked within it? Struggling to decide, she grabs it in her hand and runs away to the stairway, where she quickly consumes the entire piece with the speed with which a thief would hide his stolen jewels.

Upon returning home with the precious garment safely in hand, she is immediately found out by Safiye, who notices her chocolate stained lips. Although Gulben helps prevent Safiye from forcing Neriman to regurgitate the brownie, the harm of the entire exchange causes Neriman to shrink further into herself. This was the most distressing part of this episode because Neriman is a character without any friends or confidants. Gulben and Safiye are allies of a sort in the home, and Han and her father are united in their belief that they have saved her from danger. At school too, she seems to go through her day, unnoticed by her classmates, always alone. The pent up frustration of not knowing who to be, but realizing that the person that she is, and is on track to becoming, is not enough for anyone in her life was heartwrenching to watch.

There is a touch of mystery to this dizi that I was not expecting. Though it is unclear why the horse continues to rock in the shadows, or why Han collects and stores papers in a special box in his closet, one of the reasons for the dirty sneakers was revealed. In the wee hours of the night, Han drives a dust-ridden, old car to the shore, where he collects cardboard and other refuse in a cart, which he then empties into a dumpster. It is possible that he is trying to reconnect to his childhood, which was abruptly cut short by his mother’s discovery of his favorite toy soldier, and her subsequent disposal of it. His affinity for or interest in objects that have been thrown away adds another layer to his already complex character, and to the overarching theme of dirt and cleanliness.

Han explains his dirty sneakers by conveniently telling Inci that his company hosted a sports match in a distant town, and that was why he happened upon Uygar in the street outside of the apartment building in the middle of the night; Inci is quite astute in reading situations and people, and did not seem entirely convinced, but did not to press the matter. Both Inci and Han carry a lot of baggage filled with painful experiences; hopefully, as this story unfolds, they can help each other lighten the load of sorrow that remains from days past.

Gulben has found a reason to smile. That reason, arkadaslar, is Esmat, Han’s friend and co-worker. Although it is too soon to describe this pairing as romantic, the wide smiles on her face when she sees him, her need to check her hair in the mirror and pinch her cheeks before she opened the door to face him, were refreshing. Surprisingly, Gulben was not shy or coy around Esmat, and was almost bold in talking to him. In fact, she even asks Han to keep watch for Safiye, while she waits with Esmat.

Just as Neriman struggled with the brownie, Safiye struggled with the rose that Han gave to her. She wanted to have it, to hold it, to smell it; but the dirt from the street prevented her from touching it. So, she washed it, scrubbing precisely 4 times, to remove the grime from the street, disregarding the petals that fell away. The newly washed rose was clean, stripped of the dirt, a shell of its former beauty. Still, she displayed it on her dresser with pride.

The flashbacks provide excellent insight into Safiye’s childhood and the struggles she went through with her mother that have led her to become the person that she is today. The two scenes that stood out most were when her mother emptied the chocolate birthday cake that Safiye had lovingly prepared for her into the trashcan without taking a single bite, and when her mother refused to feed Gulben as an infant, forcing Safiye, as a schoolchild, to prepare a bottle for her young sister to prevent her from starving. It seems that after her mother’s death, Safiye adopted all of her mother’s habits, even resorting to talking to her mother and wishing death upon herself, as her mother did. Safiye, yearns to be loved so much that when her father asks that she prepare spinach, she was grateful and happy to comply, despite the struggles of washing, cooking, and then serving the final few leaves of spinach that made it to the table.

When a story inspires such awe and acclaim, as this dizi does, it is often difficult to pinpoint exactly what makes it brilliant. I believe that part of the reason for its success is the way in which the viewer is positioned. I imagine that our perspective is similar to the lens with which a psychologist might see these characters and events. For example, perhaps, Han’s father is responsible for the current happenings in his home because he never cared for his second wife, and possibly contributed to her depression and ultimate demise. But, the sorrow and anguish that he carries from the deaths of his first wife and son still weighs so heavily upon him, decades later, one can’t help but feel his pain. Likewise, I cannot fault Inci’s grandfather for wanting to protect her and prevent her from making her mother’s mistakes. After losing his daughter, how could he survive if his grandchildren suffered the same fate? Perhaps, Uygar’s remark most aptly described how one can best consume and absorb the various storylines presented, when he said: we are all just trying to hold on to someone or something, to survive.

The challenge with mental illness is that it can exist in the shadows of a home, loudly obstructing, or as an invisible limp, quietly hindering, until an event or experience forcefully reveals its stifling power.

Bravo to the cast and crew for handling this subject matter with the exceptional care, nuance and consideration, it deserves.

This show is amazing!! 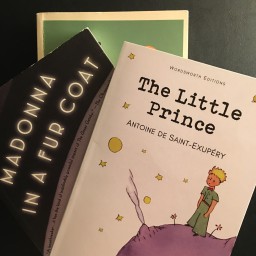 I know - right?! Thanks for taking the time to comment. :)