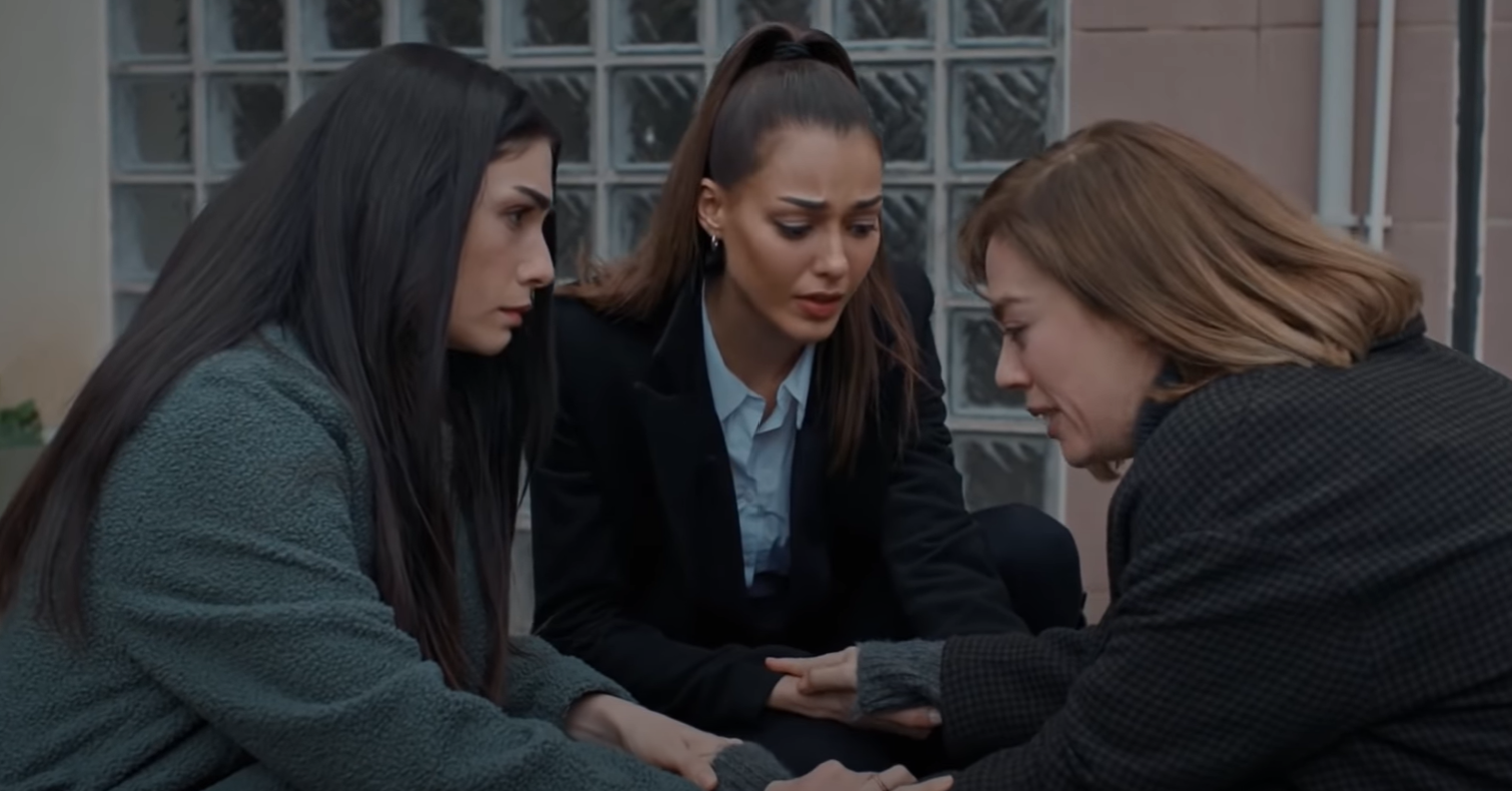 As Ozan relays the good news to his mother that he got the money to pay the fees, she informs him she has already sold the house to his uncle, Mr. Hikmet.  Cemre feels responsible for their misfortune, so she attempts to distance herself from them so Çelebi can stop harming them, however, Ozan pleads with Cemre to not do that because that’s what Çelebi wants her to do.  Cemre explains she has lost everything so she doesn’t have anything else to lose, but Ozan assures her she should continue to fight for her freedom and her life.  Cemre refuses to listen so both Ozan and Ömer leave upset that she’s making a mistake for giving up.  Outside, Ozan tells Ömer he’s going to take care of his problem with his uncle “Ömer style” so they both go to his uncle’s office where Ozan threatens him to return his house immediately or suffer the consequences.  Mr. Hikmet informs them he already sold the house to Çelebi. Before he leaves, Ömer threatens Mr. Hikmet that if Ozan goes to jail again because of his fault then he will return and kill him.

An intense confrontation takes place after Çelebi takes Gunesh home from school and comes face to face with Ms. Seyer who orders him to leave before Ozan arrives, however when he sees Cemre, he tells her by the time their divorce is done, she will be moving back home.  At that moment, Ozan and Ömer arrive ready to fight, but Çelebi's security guards help protect him.  After Ozan tells Çelebi to confront him by himself, Çelebi tells him he has nothing but his life since he already took his home and job.  He takes the opportunity to warn him to be careful, however, Ömer steps in and warns him that he’s the one who should be careful because he doesn’t have much time left to live.

After Çelebi leaves, Ozan tells them the only thing they can do is to pack up their belongings and move.  Once they’re done, Ozan has a hard time leaving behind his brother’s memories.  He tells Cemre he has always felt responsible for his death because he was chasing him outside when he was hit by a car.  Since that day, Ozan has been fighting for justice in hopes of making him a good person so he can stop blaming himself for his brother’s death.  Cemre pleads with him to stop blaming himself since it was an accident so he can just be happy.

The following day, Iskender gives Çiçek a surprise - Ali.  He came through on his promise and had him released from prison after he dropped the charges against him.  After Ali settles in, he tells her now they can resume their lives before the fire and move to Antalya as they planned.

Iskender encounters doubts at work due to Çelebi's unsolicited advice on a big investment he was planning on purchasing.  Right before the presentation for the proposal, Iskender cancels the offer after he considers Çelebi's negative comments about the investment, however his associates inform him that after they backed out of the deal, Çelebi stepped in and purchased the investment himself.

During Atlas’ custody hearing, Bulant and Çelebi are positive they’ll win their case, however, Tomris presents her surprise witness, Mr. Ismail, who is the owner of the gambling business that Bulant owes a lot of money to.  After the hearing, both Bulant and Çelebi are mad that things don’t go well for them, so as Tomris is leaving, she informs Çelebi she will resume helping Cemre now that he doesn’t have anything to use against her in the custody case.  She informs him she will be renting Cemre a home since he left her homeless, Çelebi warns her to not get involved but of course, Tomris doesn’t listen to him.   Later, Tomris calls Cemre to give her the good news that she will continue to help her starting with renting her an apartment.

Intent on getting back at Tomris, Çelebi contacts the people that were involved with changing the documents at the hospital to identify Shimal and the woman who committed suicide to testify that Tomris was the person who ordered them to change the DNA results instead of Çelebi.  Once they submit the claim to the police, they show up at Tomris’ home and take her in for questioning.  The detective explains the charges against her but Tomris doesn’t say anything and just asks for her lawyer.  Once her lawyer arrives, Tomris has her draw up legal papers to transfer all her belongings, including ownership of the hospital, house, and money to Çiçek in an effort to avoid Bulant getting access to it.  When she explains the situation and plans to Çiçek, she attempts to decline but Tomris pleads with her to accept for Atlas’ sake since she doesn’t have anyone else that she trusts to take care of Atlas.

As they wait to hear news about Tomris, Ozan checks on Cemre who is again blaming herself for everyone’s troubles.  She says she feels guilty for having her daughter with her while Atlas is left alone with no family as Tomris is in jail.  She begins to think twice about fighting against Çelebi who always seems to get his way, but Ozan tries to explain that she can’t give up, however, Cemre continues to lose hope that Çelebi will never leave her loved ones alone.  After everyone leaves, Ozan and his journalist friend, Altan, stay behind to speak with Tomris.  They’re curious to know why she gave up so quickly to Çelebi's threats instead of fighting back.  When they speak with her, she tells them that she’s partially guilty and explains Çelebi has a lot of evidence against her that will make it difficult for her to fight.  She tells them she’d rather do the time since she has someone to take care of Atlas while she’s in jail, but Altan refuses to let her give up so quickly since Çelebi is the guilty one who should be in jail.  Ozan tells Tomris he gave an artifact to his university professor to research and see what they were dealing with and asks if she wants to proceed with their investigation that they can perhaps use in their fight against Çelebi.  Tomris eventually agrees.

Once Çiçek and Ali arrive home, they have a heated discussion after Çiçek tells him what Tomris wants her to do.  Ali is completely against it, claiming that she just wants her to be a nanny when they have the money to pay people to take care of him or use Cemre and Ruya.  He tells her they should finally start living their own lives away from them and she should just be worried about starting a family with him instead of Atlas who isn’t her son.  Çiçek disagrees and tells Ali that she loves Atlas, Ali gives her an ultimatum.  She must pick either him or Atlas.

Cemre and Çelebi have their divorce hearing during which time Çelebi surprises Cemre by agreeing to the divorce, however, his attorney requests custody of Gunesh due to the fact that Cemre’s instability with work and living environment is not suitable for their daughter.  Ruya attempts to use Gunesh’s preference of living with Cemre, however, the judge gives Çelebi custody.  As he’s leaving, he warns Cemre that she should return home soon to take care of Gunesh because she knows what he’s capable of doing and walks away.

As Çelebi is finalizing his campaign, he discovers Iskender never authorized the money transfer from their company to pay the fees for advertising, etc.  He confronts Iskender who tells him his campaign fees are his personal business which he’s not paying using company money but recommends he use the income he received from the purchase he made from the investment he took from him.

As Çiçek prepares to leave with Ali to Antalya, she receives a call from Fatma, Çelebi's housekeeper, who tells her she saw Çelebi put something into Gunesh’s food.  This is a lie and part of Çelebi's plan to get Cemre to return to his house.  Çiçek informs Cemre who makes the decision to return much to everyone’s dismay, especially Ozan who pleads with her to not return for fear of him hurting her or worse, but Cemre tells him she’d rather risk her own life than to risk anything happening to Gunesh.

Çiçek arrives at the bus stop where Ali is waiting for her, however, she tells him she can’t go because of Atlas and walks away.

Ozan’s friend, Sinan, informs him that the stolen artifacts will be a major disaster for whoever took them.

Ozan and Cemre are wonderful to watch.  He’s such a thoughtful and considerate man so it’s heartbreaking when Cemre tells him to not love her.  I know she’s doing it because of the threats Çelebi has made against him but Ozan is so sweet and perfect for her.

I loved that Iskender treated Çelebi the same way he’s been treating everyone, with no mercy.  I’m glad he didn’t approve the money to support his election fund, that was a great move on his part.  I hope Iskender doesn’t back down so Çelebi realizes he can’t continue to walk all over Iskender.

I loved that Ruya and Ömer finally enjoyed their dinner on the terrace that he promised her a long time ago.  I also loved that their relationship has moved to the next level as they enjoyed a romantic dinner and their first night together.

Why did Tomris have to reveal her intentions to Çelebi!?  She should have just stayed quiet and helped Cemre secretly until after the second custody hearing.  But no!  She had to gloat and rub it in his face causing this psycho to act and look what it got her – jail.

I didn’t like Ali making Çiçek decide between him and Atlas.  It was completely unfair of him since he hasn’t been around to see how much they have bonded with each other and all that Tomris has done for Çiçek.  Ali should have been more considerate and perhaps stay a little longer so she wouldn’t be worried all the time.

Demet Evgar is such a wonderful actress.  She is one of the main reasons I love this dizi.  She’s amazing and portrays all the emotions and feelings each and every time she’s on the screen.  Great job!

It appears that Ömer and Ruya are going to face some relationship problems with the introduction of two new characters, Zeyno and Serkan.  I’m sure this is to add drama, but I really don’t like it when couples are put in jealous relationship situations.  I guess we’ll see how it rolls out.