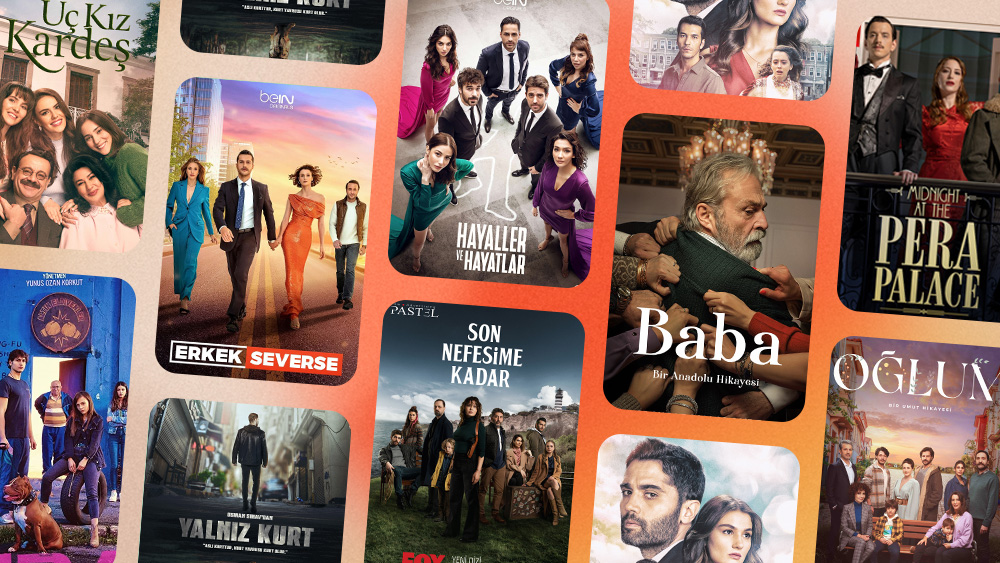 There is never a shortage of Turkish dramas to choose from, and with the new year comes a fresh batch of new shows to fall in love with.

In the event that you're looking for yet another show to add to your already long dizi watchlist, we've put together a comprehensive guide of new dizis scheduled to premiere early this year. From star-studded Ay Yapım productions to an eagerly-awaited book adaptation, here's a look at what's to come in 2022...

Duran, Celal, and Mustafa, three young people living in one of the suburbs of Istanbul, have one common goal: breaking out from the place they were born and raised. Of the three of them, Duran is working towards becoming a wealthy and famous fighter; Celal is a rap star or trying to be one, and the other, Mustafa is chasing the dream of becoming an influential gang member.

Nothing will be as before when a stranger shows up in their neighborhood with a stolen diamond.

A rom-com premiering on beIN CONNECT this winter, Erkek Severse follows a single mother of two as she juggles between her demanding personal and professional lives.

Zeynep (Büşra Develi), who lives with her two children, Kağan and Arda, is divorced from Oktay (Görkem Sevindik), whom she married with great love during her university years, because she was cheated on. Zeynep loses her faith in men and closes her heart to love. Until she meets Kenan Acarsoy (Alperen Duymaz), one of the successful businessmen of the country. Kenan, a single, handsome, charismatic, intelligent, sporty, helpful man, has many women after him, but it is not easy to win his heart. Yelda (Yasemin Allen) is one of the women who is after Kenan and she intends to carry the business partnership they have just started with Kenan into marriage.

Marriage is not an easy step for Kenan, who is a total workaholic. When he gets to know Zeynep, his mind starts to change, but with a fierce rival like Yelda, this will not be easy at all.

An epic story of the "lone wolf" confronting the secret plans of the "Goliath" organization, and the tricks of intelligence and espionage, to divide the country, change the map's features, plot coups, and sabotage countries.

İlyas and Melike are a happy family with their 18-year-old daughter Ceren and their 6-year-old son Kaan. Zeynep and Tuğrul, on the other hand, are an unhappy family who keeps arguing even when their 12-year-old son Efe is around. One day, Efe kills Kaan as a result of an emotional attack, and the paths of these two families cross in a bitter way. While Melike and İlyas are messed up; Tuğrul blames his wife for the incident. Demet the pedagogue and Sedat the police officer, are the two people who will try to find out why Efe killed Kaan. As a result of this trauma, all of the family members will go through a transformation, and we will be watching the transforming effect of this trauma.

Emin Saruhanlı, an authoritarian father, committed to family values, learns that he is the sole heir to a considerable fortune as a result of the loss of one of his close relatives. When his family trades in their modest life in the city for their newly-acquired mansion in Istanbul, Emin gets into a difficult struggle to keep his family together.

Dicle, Güneş, Setenay, Melike, and Meryem are close friends with frequent conflicts between their dreams and realities. Together, they face all tribulations and set out with hope and dreams every day. Of the five, Setenay, is about to get married to the love of her life amid family drama; Dicle is temporarily working at a job she hates as she walks her way up to being the writer she's always dreamt of; Güneş is fresh out of law school, looking for a job that doesn't go against her strong beliefs; Meryem works a steady job clouded by rumors about her; and then there's Meryem, the mother-figure of the group, always willing and ready to give sound advice to the girls.

Just as they are all about to have their dreams in sync with reality, tragic strikes, leaving the girl squad down a number.

Once upon a time in a beautiful yet mysterious country, there lived three sisters named Türkan, Dönüş, and Derya. As a close-knit family, they would dream of a promising future every night. Perhaps such an upbringing, that was similar to a fairy tale on the pine-scented streets of Ayvalık, had not prepared them for the grim reality of adulthood.

Over time, the sisters discover that life and the choices that are accompanied by it are not as easy as they seem. Inconceivable secrets can be hidden even by those who are trusted the most, and horrific illnesses can lead to the resurrection of the past. This leads them to the question: Is there anything in the world that time cannot heal?

The only Turkish remake airing this winter, Son Nefesime Kadar is based on the British series 'Happy Valley.' The series follows a no-nonsense police sergeant (Nurgül Yeşilçay) in a small town whose world is turned upside down when the man she thinks is responsible for her daughter's death is released from prison.

Mihri is a grieving mother who lost her daughter after a great disaster years ago. As a result of a radical decision she took after this loss, her family split up, and she is left all alone. Comforted by the warmth of her grandchild, who was the only memory of her daughter, Mihri has resulted to living a simple and small life, at peace with what life brought her. That is until she hears that Ejder, the man responsible for his daughter's death and a crime machine, is out of prison. Now her only thought is to catch him, put him behind bars again, establish justice, and prevent the disaster that befell her daughter from happening to another innocent. Mihri trusts her intuition and follows it -- and she's right. As soon as Ejder gets out of prison, he commits a terrible crime and harms another young girl. Mihri puts forth her profession, even her life, to prevent him, to stop him. After a long struggle, she finally catches him and puts him in jail. However, another bond connects Ejder and Mihri, and this bond will not be broken forever. It is little Umut. While Mihri is trying to collect the pieces of her family that have fallen apart, she also enters into a great struggle not to lose her grandchild.

Pera Palas'ta Gece Yarısı is adapted from the award-winning non-fiction book of the same name written by Charles King. The 8-episode series depicts a young journalist, Esra's encounter with the legendary Pera Palace Hotel in Istanbul. When Esra is assigned to write a piece about the hotel, she accidentally discovers that one of the historic rooms is a portal to the year 1919. Thrust into the past, she lands in the middle of a political conspiracy against the founder of modern Turkey, Mustafa Kemal Ataturk. Together with Ahmet, the quirky hotel manager, Esra must protect the course of history and the future of Turkey. But Istanbul in 1919 is a dangerous place, and when Esra meets Halit, the handsome and mysterious owner of Istanbul's wildest club, she realizes that in the Istanbul of 1919, nothing is as it seems and no one is who they say they are.