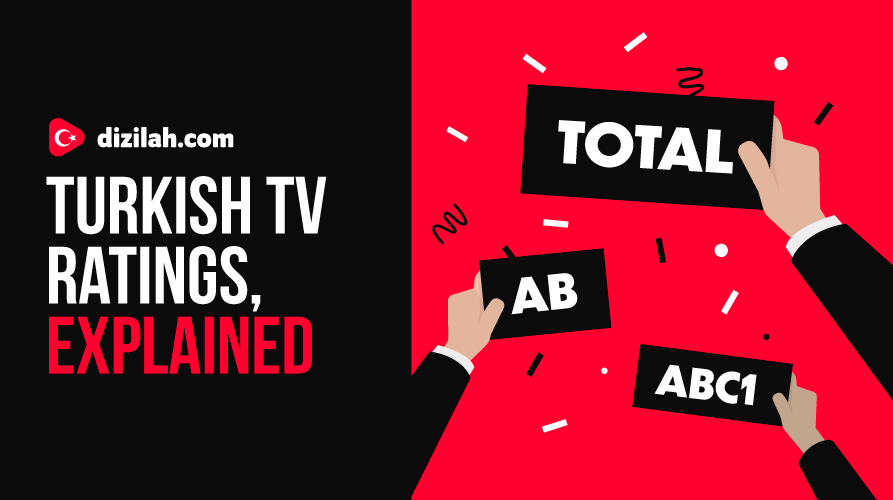 Nothing gets us internationally fans quite as riled up as the Turkish TV ratings system. Every night, a good number of us are awake earlier hours of the morning, awaiting the ratings, in hopes that our favorite show does well in the overnight ratings.

For the new ones among us, we've tried to break down the ratings system as best as we possibly can below! Please use it as a reference and be sure to leave any queries/comments you may have!

Ratings are the standard for measuring the audience size and the profitability of any given dizi.

The overnight ratings come each morning and the results are reported in three main categories: Total, AB, 20+ABC1.

The importance of a category is usually determined by the socio-economic background of the segmented audience counted in that category.

How are the ratings calculated?

The ratings are calculated by tallying the ratio of the average number of audience, within a particular category/universe, watching a particular dizi at any given time.

Is every household counted for the ratings %?

The measurement samples, released to the public, only account for a particular subset of the population in Turkey. Urban and rural settlements in 40 provinces are covered in each of the aforementioned categories and according to TIAK, the company that tallies the ratings, "Ratings data obtained from the measurement is reported in terms of ~14,000 household members living in 4,400 (Gross) / 4,000 (Net) houses and ~750 guests visiting these households."

Why are ratings important?

Short answer: Ratings are important because they determine what shows stand the best chance of surviving each highly-competitive season.

TV is a business and good ratings usually translate to good advertisement revenue, which is a major upside for the networks as that is their main source of revenue.

As the production budget/cost for every dizi is highly dependent on ad revenue, a show's ratings must be high enough that the revenue received after each episode is enough to cover the production of future episodes of the show. This is the reason why ads during each episode last nearly 30 mins.

Episodes are filmed to air in Turkey as opposed to having a whole season filmed in advance, which means that if a show isn't doing well ratings-wise, the channel can abruptly decide to end it.

The "Total" category consists of all people at and above the age of 5, living in segmented rating households. All of the TV audiences are accounted for in this category: AB, C1, C2, D, E...

In this category, the C1, C2 and D audiences carry the most weight as they constitute the majority of the TV audience as a whole. Audiences that fall in the C2 and D group are relatively uneducated and poor.

The "AB" category consists of relatively more-educated people at and above the age of 5, living in segmented rating households. Think well-to-do employers, white-collar employees, etc.

This is the most important category of all three as advertisers invest mainly in this group.

This category, which consists of people who are at and above the age of 20, comprises of the well-educated AB target audience plus a more moderate group of individuals such as retired employees, blue-collar employees, housewives, shopkeepers, etc..

As this category represents the true average of all the important categories, ad rates and revenues for the channels are determined based on ratings in this group.

What is considered "good" ratings?

What is considered "good" is constantly changing and is strongly dependent on the season and channel the show is on.

During the regular dizi season (September – May/June), any show averaging 6 and above in any two categories is doing good enough to survive that season.

During the summer season, however, 4+ in the total category may be considered decent but not good enough to roll the show over to the regular season.

How would you rank the channels in terms of cancellations:

ATV – Likely to cancel a show for low ratings without notice

TRT1 – Shows are guaranteed at least one full season.

TV8 - Shows are guaranteed at least one full season.

Do International Fans count towards the TV ratings?

Unfortunately, no! Only a subset of individuals living in households in Turkey with at least one television in operating condition count towards the ratings.

While Social Media trends and topics are complementary to the TV audience measurement, they cannot be seen as the ultimate TV Rating system substitute in any way, shape, or form.