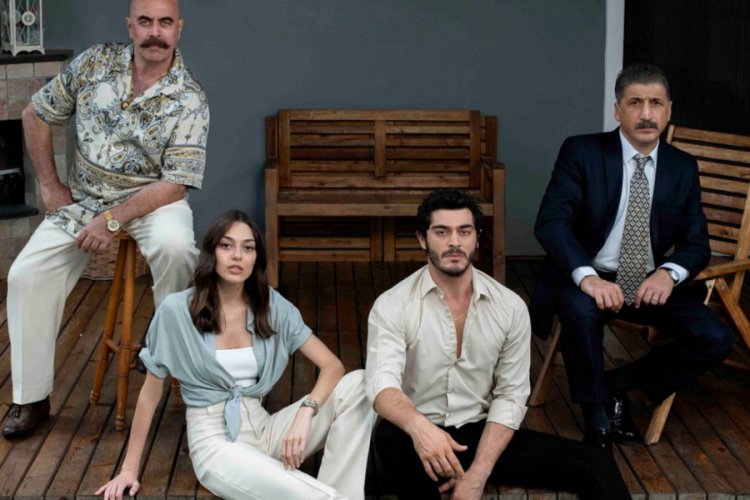 Counterfeit money. Counterfeit scenarios. Counterfeit behaviours. Counterfeit emotions. Counterfeit identities. Counterfeit genre. Yes, we still laugh but we will find ourselves stopped consciously. And, our own perspective that judged the characters so far transforms into a camera filming the absurdity of our crude reality. Episodes 4 to 7 of BluTv’s thriller dark comedy Yarım Kalan Aşklar (Tims & B Productions) gives us a stab of adrenaline as surprising yet raw plot twists keep breaking out like a purple rash. Unlike in episodes 1 to 3, major plot twists start to unfold in broad daylight and the blind starts to show the light. The series starts to take a subtle shift in its sensibility and each character becomes a short film. The thriller drama genre starts to take the lead slowly and the dark comedy genre starts to serve the comic relief role.  And with each episode, the personal becomes political; the political becomes personal.

We saw how episodes 1-3 were about justice playing 4D chess. Well, from episode 4 onwards it’s all about humanity cross-stitching into a 4D mess. Ozan’s soul in Kadir’s body (Burak Deniz) still has the same three challenging tasks: find out who killed him, tell Elif (Dilan Çiçek Deniz) the ridiculous truth, and still not to get caught for the crimes of Kadir. Ozan’s soul is no longer white as snow. Kadir is no longer black as pitch. Their multifarious diffusion is now as red as human. Therefore, the story is no longer about a fight between good and evil but intriguingly, a scrimmage between ethical evil and unethical evil.

Ozan starts to use Kadir’s cunning ways to save himself from Kadir’s criminal tangles. Ebru (Nazli Bulum) finds out that Kadir is involved in Ozan’s murder. Oh no! A young couple confesses to a hit and run murder they committed. How responsible! The police find out the dead is a middle man dealer and recovers the 2 million TL Kadir secretly gave him. Güzel! Kadir steals the same from police custody and gives some to Ebru to keep his secret. Vay be! She confesses her love for Kadir. Wow. He pays all his debts and, even gives Saadet (Esra Rusan) the alimony. Finally! The blind man Cemal Yanik spills the truth about the factory to Elif. Exactly, blind leading the blind. The people hit the streets in protest following Elif’s tweet. #TrueStoryNoJoke. Mistress Ece (Gizem Ünsal) helps ex-wife Saadet and daughter Ada (Zeynep Nas Kasap) in a minor kidnap event. Life happens, ya'll! Kadir pays money to gangster Ismet (Ezel Akay) to release them.  Saadet confesses how once she loved Kadir. Guilt trip timing on point!  Kadir kisses Elif and now Elif feels Ozan’s vibes in Kadir. Of course, she’s losing it!

Is it done yet? Well, no! Say hello to more thrilling comic drama! The blind man is killed. Ebru is caught with fake money at a bank. Wait, what? The hospital decides to halt halfway Saadet’s breast removal surgery. Is this for real? Ismet confesses to Kadir that Police Chief Nejat (Cem Davran) is involved in Ozan’s murder?  But, ain’t this too cliché for a thriller? Anyway, Ismet’s girlfriend Ece confesses her love for Kadir. For the love of romance, who exactly is Kadir, people?!  Ismet figures that the money Kadir gave him was fake. Boom! Ebru shows Kadir’s video to Police Chief Nejat. Voila, Ozan is back to square one with Kadir’s mess!

Ece is shot by Ismet’s men while she is in Kadir’s car. Ex-wife Saadet treats the wound of mistress Ece brought to her by her cheating ex-husband Kadir. No, Kadir was never Ozan’s anybody, let alone classmate. Ismet goes all romantic with new-daddy feels when Saadet drugs Ece. Ece sleep talks to Ismet that the baby is actually Kadir’s. Has an ultrasound scan ever sounded ultra-creepy? Yes, Ece’s pregnant. Chief Nejat keeps coughing and clearing throat.  Mehmet (Cihat Suvarioglu) saves Ebru’s jail time but hey, how about she confessing to the entire crowd that he slept with Mehmet’s best man Kadir? Oh, and somewhere in between all this, Elif and Kadir crossed the line and witnessed another murder. Chances are they might be involved in the crime. Yeah, at this point does the polluted, toxic lake in Altintepe and public health hazard issues even matter?

Life is a theatre of everything absurd. So is Yarım Kalan Aşklar. Director Umur Turagay seems to have conceived episodes 4-7 with a boomerang image in his mind. What goes around keeps coming around. The plot turns into a maze that has trapped myriad imposters finding their way out only to realize that there is no exit. Like the factory and the polluted lake that blinds and deteriorates the people in Altintepe, need and greed blinds and deforms the human in humanity.

Yarım Kalan Aşklar has consciously tried to overcome difficulties faced while filming a literary concept.  Subjects like murder, violence, death, political corruption, human sexuality, poverty, disease, and class and sexual stereotypes take a serious note now as the heavy make-up of dark comedy are wiped off layer by layer. The screenplay is cleverly edited to give the necessary comic relief. The cinematography continues to keep up ambitiously with the emerging themes and thriller aspects by choosing camera angles like panning and low-angle shots that make the viewer feel weak and insignificant by building suspense, tension, uncertainty, and a larger than life intimidating aura of an invisible villain. With each frame, our senseless laughter turns into a panic one.

Along with the plot and story, the explosion of talent the actors' exhibit is undoubtedly one of the finest. Each performer gets more screen time as more shades and layers of their characters start to reveal. Burak Deniz keeps delivering top-notch performance and the quickness with which he snaps back and forth from Ozan’s mind to Kadir's personality to their diffusion is commendable. The increased ease of Ozan’s soul in Kadir’s body is mindfully depicted in the body language. The struggle of Ozan in his helpless limitation to be himself before Elif is an acting spectacle. The speech pattern and countenance change that is required as the character oscillates between Ozan and Kadir has been depicted with a smooth finesse by Burak Deniz.

The female lead Dilan Çiçek Deniz (Elif) continues to anchor the story and series with her consistent, natural performance. Elif is the only character that is round yet consistent in the entire series so far. Actress Esra Rusan (Saadet) stays solid in her depiction of Kadir’s nagging wife. She is a surprising wonder to watch. Gizem Ünsal (Ece) shows her acting flexibility as her feisty character experiences tender moments as the show progresses. Yet, the tenderness is expressed with a focus to retain it in the frame of feistiness. Nazli Bulum (Ebru) does unique and convincing magic of delivering an effective performance by playing mainly with her eye work and voice modulations. She successfully manages to engage her character by mostly keeping a straight pale face that expresses everything from suppressed passion to dissatisfaction to greed. And her screen presence was given its deserving validation by the screen presence of co-actor Cihat Suvarioglu (Mehmet). Mehmet is a raw, honest, and susceptible police officer and lover who represent the simple common person who is surrounded by lives masked in secrets. Ezel Akay (Ismet) delivers a megawatt dramatic show tuning in his acting the fine tight rope between a dark thriller and dark comedy.

With just one more episode to wrap up this season, Yarım Kalan Aşklar so far has handled tricky storytelling in the most effective and creative way. In its message, the aesthetics of the content, and in the use of technology, Yarım Kalan Aşklar has set a distinctive benchmark for the Turkish filmmaking industry.