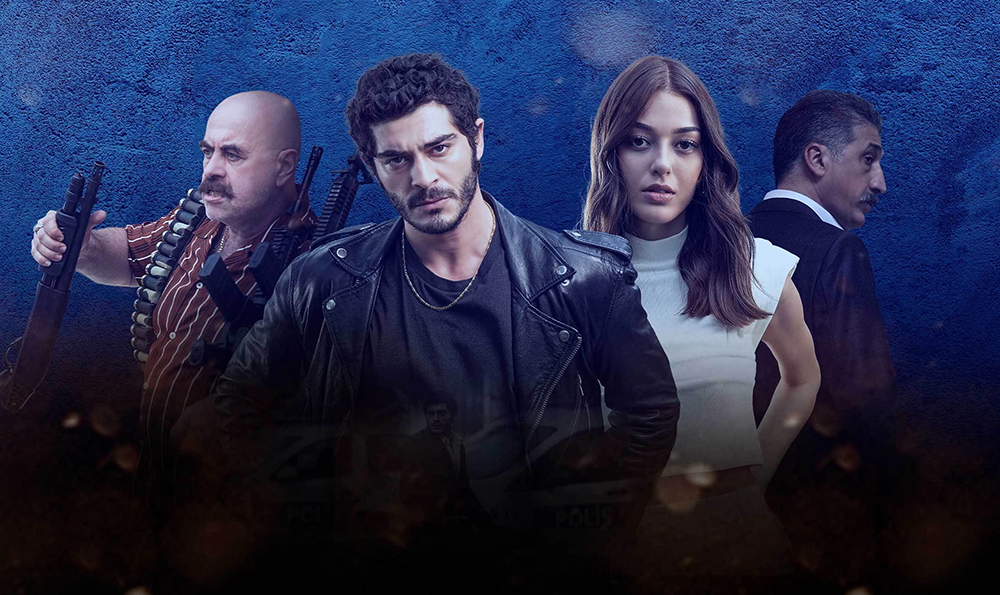 Remember how Samuel Beckett’s Waiting for Godot is a “play in which nothing happens, twice” because “nobody comes, nobody goes, it’s awful!”? Well, BluTv’s Yarım Kalan Aşklar (Tims & B Productions) is a short series in which nothing happens twice because everybody comes, everybody goes, it’s despairing. Did we tell you that this thriller dark comedy is all about justice playing 4D chess? It’s not. We were wrong. Did we mention this was all about ethical evil fighting unethical evil? Well, we were only half right on that one. Did we indicate that this series eventually opens our eyes to see our own ugly truths? We got that one undeniably right. Four minutes into the first episode Ozan (Tolga Sarıtaş) had stated, “Photographs [visuals], my love, sometimes they keep a lot of secrets.” Almost around four minutes before the series’ end, this quote abruptly takes the center stage spotlighting itself right yet again, establishing the entire series as a devastating game of visuals unleashing heavy metaphysical anguish.

From the beginning, Yarım Kalan Aşklar took some of society and humankind’s vilest impulses and kept throwing a pie right in their faces. Also, its plot numbed our conscience with its structuring and sardonic humour before it slashed our soul with its nuanced themes and mordant wit.  Flung into a mockery of appearances and judgments, we felt sour despair and we were so speechless that we could do nothing but laugh. As the series progressed, we still laughed but we found ourselves stopping it consciously. And, our own perspective that judged the characters slowly transformed into a camera filming the absurdity of our crude reality. Episodes 1-3 seemed like a 4D chess played by justice. Episode 4-7 felt like humanity cross-stitching a 4D mess. But the eighth and final episode? It was all about life being a multidimensional marionettist causing justice, righteousness, revenge, and humanity to rave to the tune of its cosmic absurdity.

Yarım Kalan Aşklar shattered every expectation we built up during the series. With clever story-telling using a tightly-written riveting screenplay, the makers took us to a make-believe world where we laughed at the stupidity of human behavior amidst grave circumstances and judged unreservedly characters, crimes, evil networks, and possibilities. Yes, the series subtly made us pick sides. We shipped Elif (Dilan Çiçek Deniz) and Kadir (Burak Deniz) because we felt we were some omniscient viewers who know exactly what is going on. Yes, the show let us puff up our arrogance. We start the last episode hoping to see Ozan/Kadir heroically solve the Altintepe investigation. We expected Ozan/Kadir together with Elif delivers justice to rectify the corrupt system and Ozan/Kadir finally reveals to everyone and, especially, Elif the ridiculous truth and, Elif and Ozan/Kadir revive their happily ever after. Bafflingly, none of this happens. We are left wondering what must have happened to the poisoning crime. We are blacked out swiftly from even grieving Elif’s plight, let alone ponder what would become of her. Yes, the show plays us by exposing to us what we judge how life and morality are supposed to be.

The opening shootout scene of the final episode is a quick, unexpected dismantling of the dark comedy remnant. Chief Nejat (Cem Davran), Mehmet (Cihat Suvarioglu), and gangster Ismet(Ezel Akay) drop down into stillborn characters. Ebru (Nazli Bulum) turns out to be a foreshadowing of our horrific mental state as we watch the final minutes of the series. Ece (Gizem Ünsal) becomes the rebellion that somehow subsists the counter-currents. Saadet (Esra Rusan) surprises as the fittest selection to survival. Ada (Zeynep Nas Kasap) stuns as the only innocently sensible individual who hides the trump card in her red backpack of obedient intelligence. And of all characters, it is Elif who thwarts the story to square one by pulling the trigger with the wounds she kept alive; impulsively acting upon the half-truth her visuals deceived her into. The anchor that held the story and Ozan’s character grounded becomes the very dynamite that wrecks the ship entirely. The makers take us all to the peak of moral high ground only to push us down heartlessly. Yarım Kalan Aşklar essentially is crude reality bitch-slapping our egos.

Burak Deniz and Esra Rusan steal the final episode with their unreal versatility as performers. Dilan Çiçek Deniz continues to deliver a focused, enabling role gifting Burak the screen space ease to flex his acting muscles. Esra Rusan’s capacity to emote emotion staying categorically true to her character is acting extravaganza. Burak Deniz has delivered an effortless, mindful top-notch performance throughout the series and Kadir will be remembered as a groundbreaking character in the history of Burak’s career and in the Turkish filmmaking industry as a whole. His portrayal of a man taking his life in utter devastation revealed in the last two minutes of the show is a freezing experience. Zeynep Nas Kasap who played Kadir's daughter Ada deserves a special shoutout for pulling off a crucial character with such originality, believability, and likability.

Director Umur Turagay seems to have envisioned the final episode around the image of a wind-up toy. The screenplay tells a story and it comes to a stop before completion. Another scene or event starts only to be halted halfway. Flashbacks too reveal just a fragment and stop. We are given just the needed information and stopped instantly when we get curious. Humour too transition from its pure thematic entertainment role to a comic relief one. The last episode has few humorous exchanges but we feel more pity than happiness. Overall, the director’s vision to keep challenging our worldview and playing us with tricky story-telling is neatly executed throughout the series. The settings, art direction, styling, and background score all complimented the oscillation of the genre between dark comedy and suspense thriller. The cinematographer has executed unpretentiously the vision of the director by choosing camera angles and shots that frame the genre mix and plot development effectively.

“There is but one truly serious philosophical problem and that is suicide. Judging whether life is or is not worth living amounts to answering the fundamental question of philosophy.” This is how Albert Camus begins the ‘Myth of Sisyphus’: a philosophical essay that introduces his philosophy of the Absurd. Throughout the series, we hailed the soul of Ozan; for it to get justice and for Elif to reunite with her boyfriend. To our shock, ironically, Elif takes Ozan’s life in her zeal to avenge his murder by Kadir. No, it was never Kadir that died again, it was Ozan; the Ozan in Kadir’s body. The dead died again. And exactly when we start a disappointing mental rant questioning this unfair grand player called life and feel disillusioned that at least Elif couldn’t learn the actual truth, we are shown Kadir’s heartbreaking truth. We feel acutely uncomfortable. Not just at that chilling scene but also at the fact that we suddenly start to feel for a man whom we hated throughout the series. Oh, how we humans prefer even only those truths that suit our convenience!

Ozan waking up in Kadir's body played out as righteousness waking up in the flesh of unrighteousness whilst exposing self-righteousness. It was morality having its being in immorality mocking moral reasoning. Yarım Kalan Aşklar is a maze where visuals constantly bypass reason. No one is who they appear to be. Nothing is so as it presents it to be. As the adage goes, believe not what you hear; believe only half what you see. The blind wasn’t blind after all, değil mi?