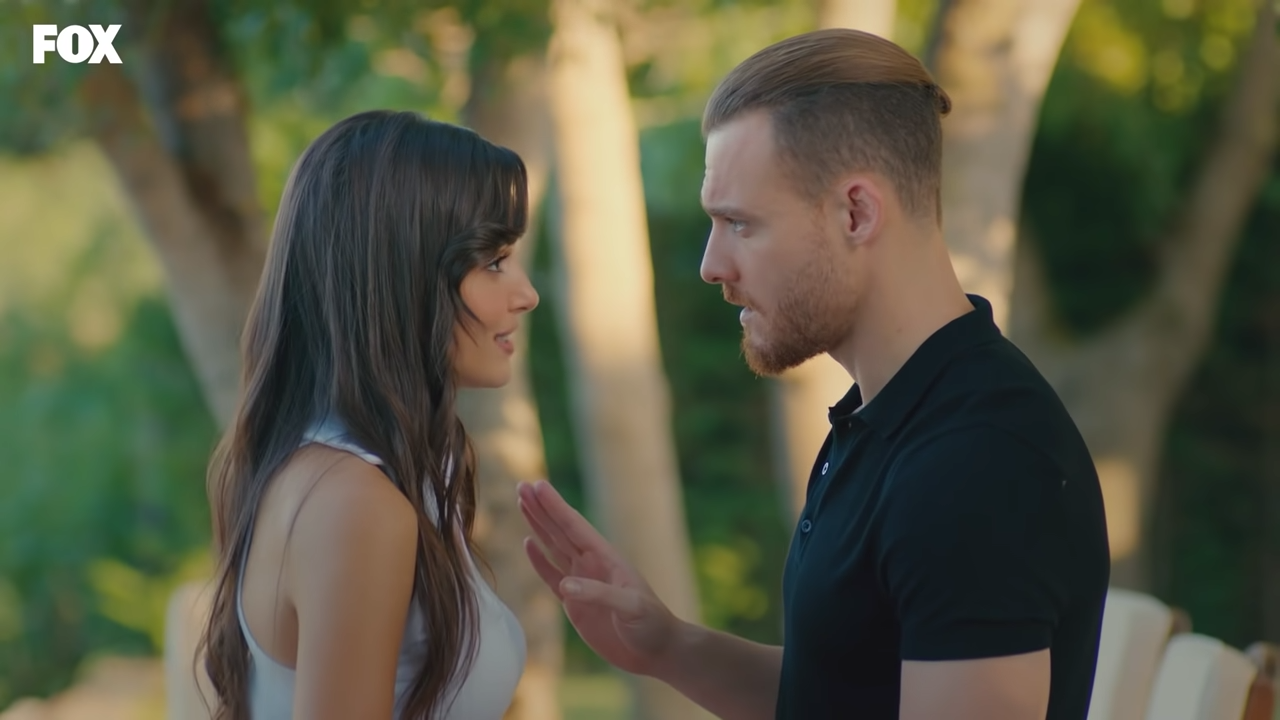 Happiness is holding someone in your arms and knowing you hold the whole world.Orhan Pamuk

We are nearing the end of Sen Çal Kapimi and as a fandom, we are being blessed with the rare treat of being given several episodes where the main characters are happy and the conflicts are either comical or easily resolved. This is what I hoped the ending for the show would be, us getting to see Eda and Serkan and the rest of the SÇK family live a happy life together. Most diziler of this genre do not get to have this. Other than Kiralik Aşk I cannot think of another show that gave us this much time to spend with characters post-conflict.

These two episodes provided some beautiful and heartwarming scenes between Eda, Serkan, and Kiraz, but also some great side characters scenes that at times had me tearing up. It’s such a joy to have the original iterations of characters like Piril, Engin, and Ayfer back. With the creator of these characters at the helm, we can enjoy all the callback to their relationships but also get to see how the characters have grown. We wouldn’t have gotten this if SÇK had been canceled before season two, so I am very grateful for that.

I know that many of us are experiencing what I have been calling ‘SÇK fatigue’. If you have stuck with the show week to week we are now in the 14th month of it being on the air with only one significant break. So as much as we will miss the show, I think it’s understandable that we, the audience, are looking forward to the end. So, I for one am just going to enjoy the ride, like it’s the last 50 metres of a roller coaster. We’ve lived through all the stomach-churning loop-de-loops and are now coming in to the safety of the flat part to disembark. 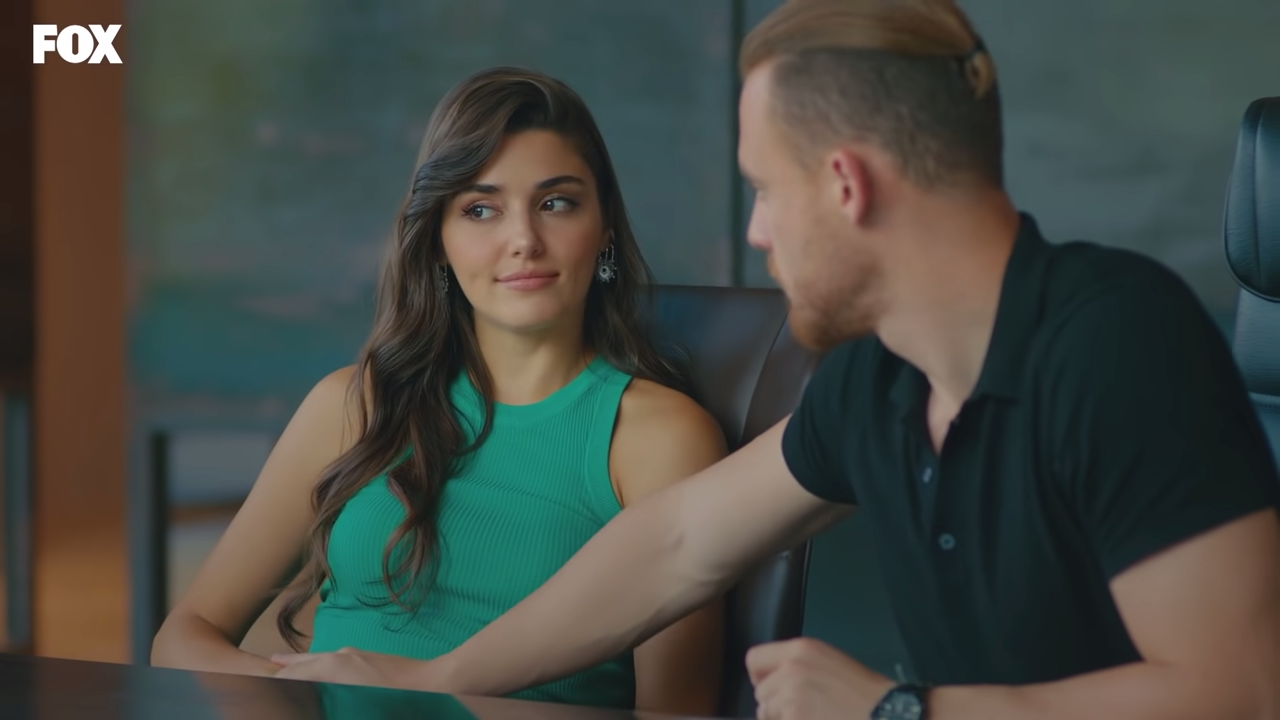 Even though we do have these last few episodes to bask in the love story of Eda and Serkan to fit in all the things that the audience wants to see things are going to have to be a bit rushed so we are getting an Eda pregnancy right away.

Serkan was exactly the overprotective hypochondriac I thought he would be around Eda being pregnant. From freaking out about her doctor to monitoring her like a hawk, wanting to go everywhere with her, to not letting her eat sugar, he was just as I imagined he would be. It makes my heart so happy that we get to have Serkan, who at various points likely never thought he would get to have happiness like this, be over the moon excited about welcoming another member into the Bolat/Yildiz family. 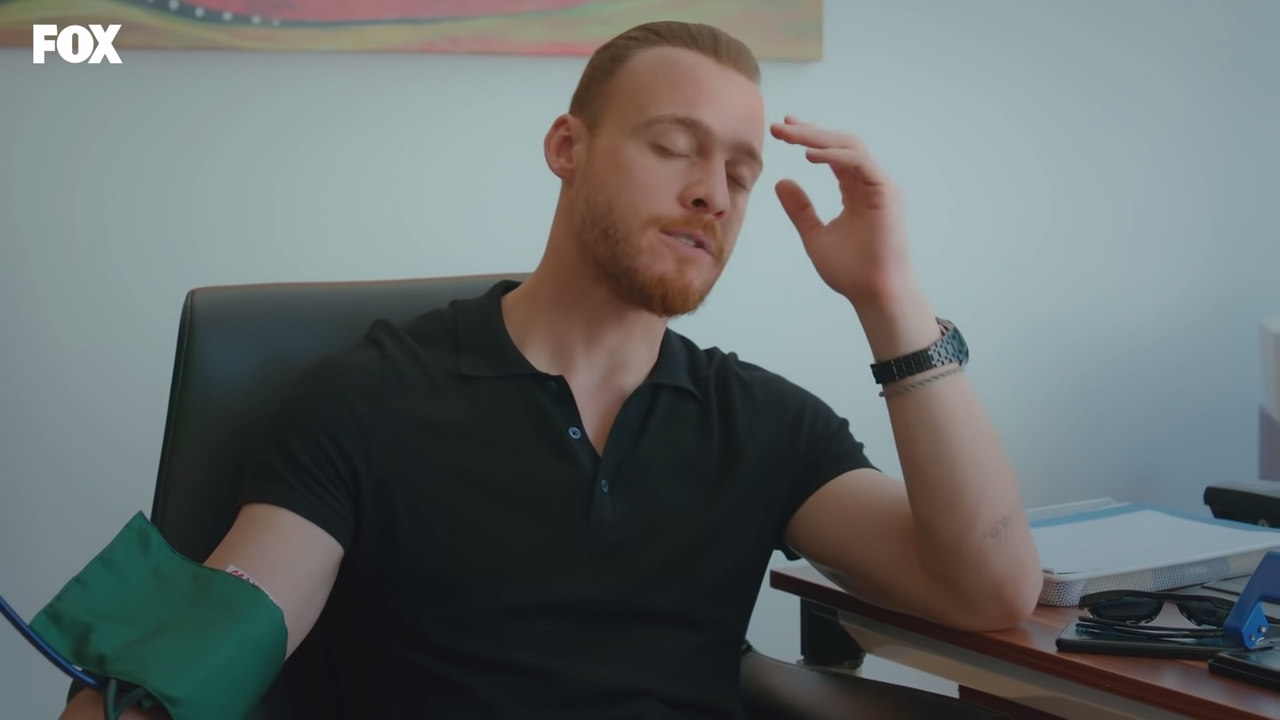 He has completely shifted gears into family life and, to a lesser extent teaching, being the focus of his life rather than being an architect. He tells Eda that he has fulfilled most of his big dreams already, now it’s time for her dreams to come true and he is going to devote himself to making that happen. She loves him for that but she knows that architecture is still his passion so she works to make it possible for him to have everything, family, teaching, and work. He initially thinks that she has lost interest in him because she is spontaneously falling asleep and she is pushing him to go back to being an architect, but his insecurities are soothed as he finds out that she is pregnant, not bored and that she wants him to go back to work because she knows him well enough to know that he would miss it too much.

The reconciliation and new start for Serkan, Engin, and Piril was so wonderful. Serkan apologized for leaving them in the lurch and for taking on so many big projects that they ultimately couldn’t handle. He was trying to fill the Eda shaped void in his life with work and dragged them along with him. But now that Eda is back and he has her and Kiraz, he doesn’t want to spend so much time and energy working. Piril and Engin are feeling the same way as they also have a young child to raise. They talk about why it’s the love that the three of them have for each other that made Art Life special was and the hug at the end of that conversation made me tear up. We finally got to see what a strong bond that they share and that now they have a shared goal of starting anew but with a business that is only big enough to provide for their families, they will not try and take on so much work and have to work so hard in the future. Piril has the hardest time with this, of course, because she isn’t a person who is used to giving up on things, but they are on the path to having a smaller firm.

Happiness is not something ready made. It comes from your own actions. Dalai Lama XIV

I have to say that the ‘french farce’ comedy of all the misunderstandings of episode 50 was very funny. It harkens back to the mistaken identity of the pregnancy in episode 17, one of my favourite episodes, and in this case, was multiple mistaken identities and a lot of miscommunication.

This was mostly brought forth by Erdem, who played the role, not unlike Puck from Shakespeare’s A Midsummer’s NIght’s Dream. He snooped and gossiped and told all sorts of incorrect tales, and had everyone in a tizzy. Serkan rightly chased him into the pool at the end. I have never liked the Erdem character, but the use of him in this role of a creator of chaos was good in episode 50. 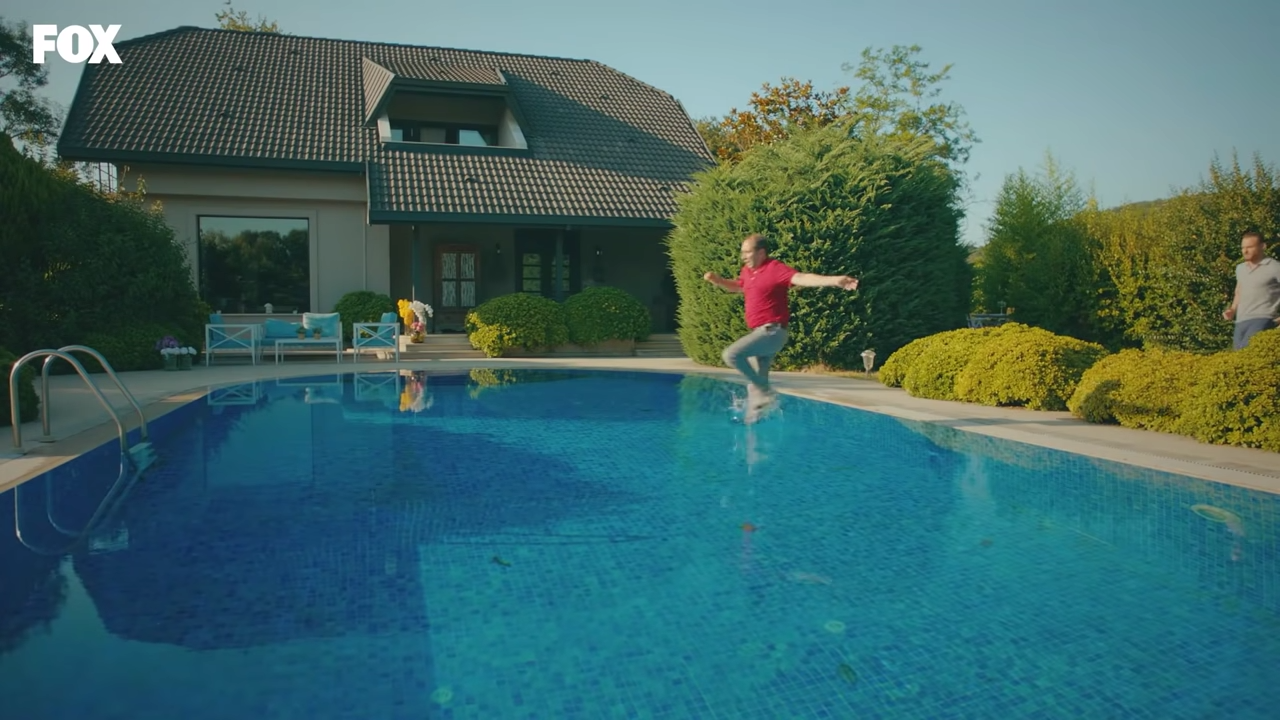 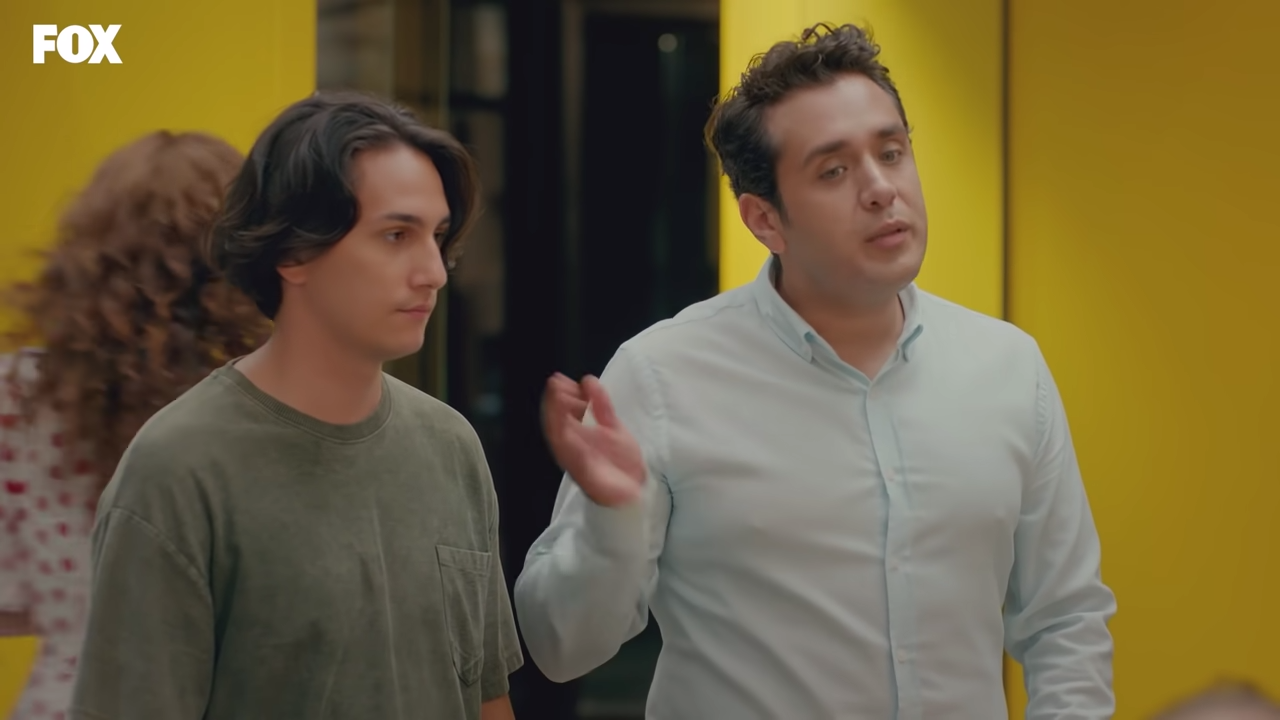 Seyfi goes through what he thinks is Pina’s bag (it isn’t, it’s Eda’s) and finds a pregnancy confirmation, so Seyfi, Aydan, and Kemal think Pina is pregnant. Ayfer, Melo, and Erdem think Aydan is pregnant, but why Erdem would think it’s Aydan in the first place is beyond me. Melo goes through Eda’s bag and finds folic acid and other vitamins and she and Ayfer decide that she’s depressed which is reinforced by her crying, and eating, and falling asleep all over the place. Eda doesn’t want anyone to know she’s pregnant yet so she’s not telling anyone, although Kiraz overhears. Serkan and Eda are blissfully unaware that any of this is going on. This was all played for laughs and was quite funny. Kerem tells everyone that for sure Pina isn’t pregnant, Aydan also tells them it isn’t her and finally they realize that Eda isn’t depressed, she’s the one who is pregnant, which she confirms after jumping in the pool to escape them.

However, the funniest bit of episode 50 was that Aydan, because now she is poor, had to go and have botox at a cheap doctor and has seemingly paralyzed half of her face. This isn’t particularly funny in and of itself, but the reactions of the other characters to her, especially Kerem Bürsin as Serkan, are hilarious. Aydan also has to contend with Kemal’s mother coming to visit, and as Ayfer points out, it’s just desserts for how Aydan has treated Eda in the past. Kemal’s mother is told that Kemal and Aydan are getting married and that Kemal has a child. The poor woman is overwhelmed and blurts out that Istanbul is just like what it’s shown to be like in her diziler.

The last thing that I loved was all the happy married scenes for Eda and Serkan. It may seem cheesy but it is great to have all the fun, romantic scenes between them. These two characters have had very, very few happy episodes and it is wonderful to get to see them happy now.

Serkan as a professor was very fun and I’m pleased that they have shown his character growth in taking on something like teaching. The Serkan we met at the beginning of SÇK would never have even considered it, let alone going out for çay with the students. He has opened himself up to new people and new experiences and while he may complain and grumble, he’s comfortable enough in himself to do it. I will say again, I think that he always had this in him, he was just so unhappy before that he never wanted to interact with people before in this way.

I’m so enjoying the fabulous foursome of Serkan&Eda and Engin&Piril. I didn’t imagine when things were at their worst in SÇK that we would have these characters be such close friends and support one another. So, as much as I miss the kizlar from the early episodes, it is nice to see this friendship blossom.

Pina and Kerem were cute this week, so for as much as their storyline is unnecessary at this point in the show, at least it’s fun to watch them in their roles as mentees to Eda and Serkan.

Sigh. The Melo and Buba romance is in full swing, although we didn’t get to see them decide to be together, all of a sudden it was just happening. This relationship is a bit pathetic and you can’t tell me, given that they had 13 episodes to do it, that they couldn’t have given Melo a better love story? She is such a beautiful character, she has wanted to find her true love throughout the whole series, and this is the tepid romance they give her? She deserves better. 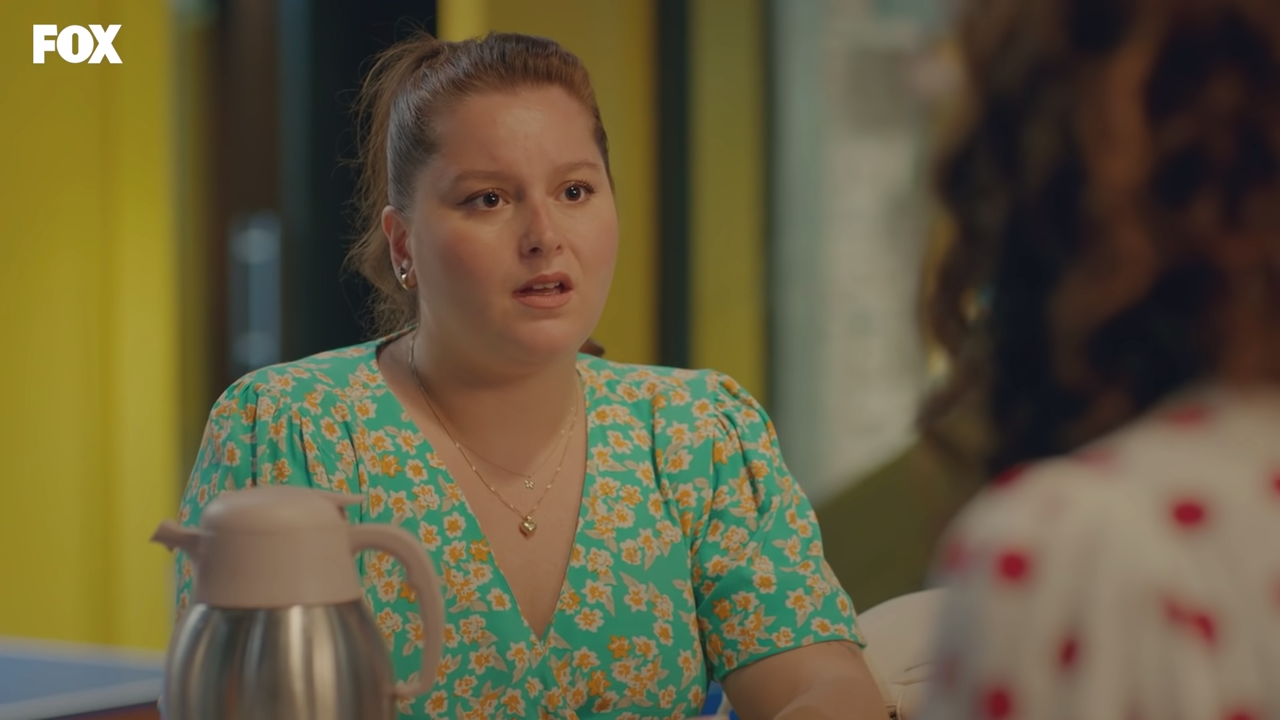 Aydan is going to get to be married to a wonderful man and excuse me for being petty, but she doesn’t deserve it. The only saving grace is that Serkan is still mad at her and is calling her out for all the crap she has pulled over the years, and her new mother-in-law is putting her through the wringer. It will never be enough though to redeem this character.

So, we are rapidly coming to the end of the series, it’s been quite a ride and I am ready to get off. However, I am very grateful to get to spend this much time with the characters in a good place and I’m very much looking forward to the next two episodes. 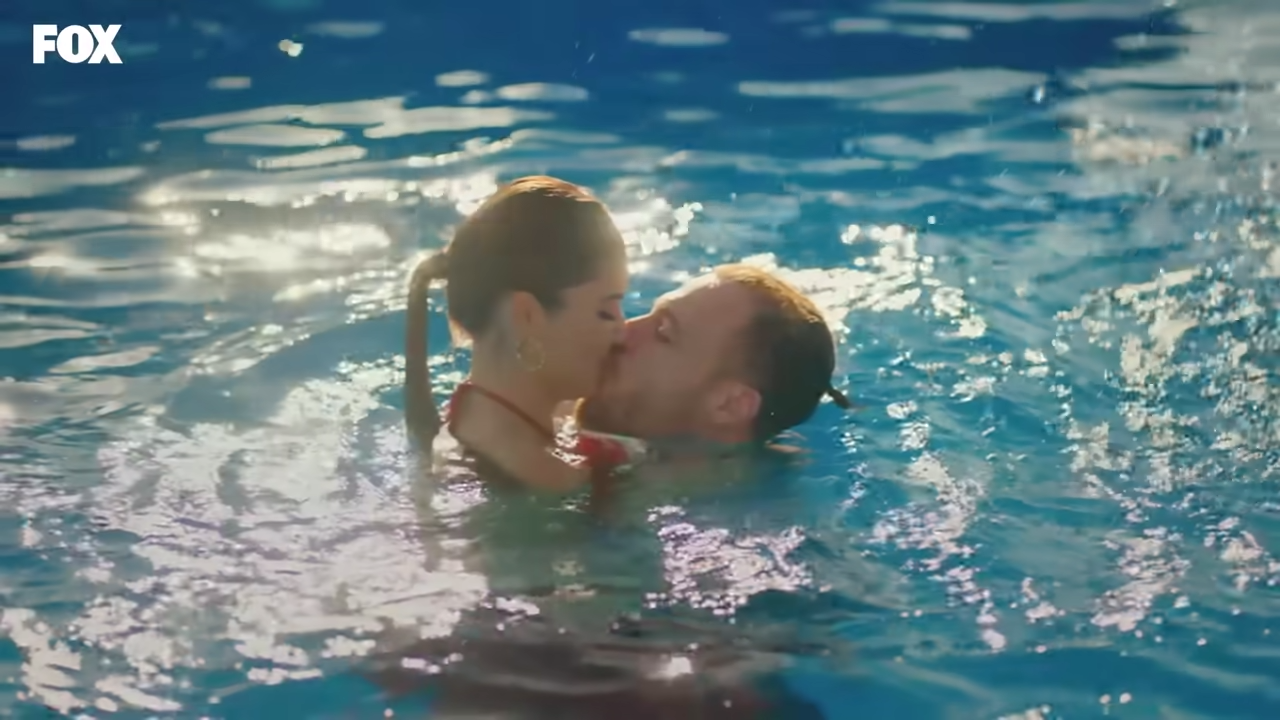 I must learn to be content with being happier than I deserve. Jane Austen, Pride and Prejudice