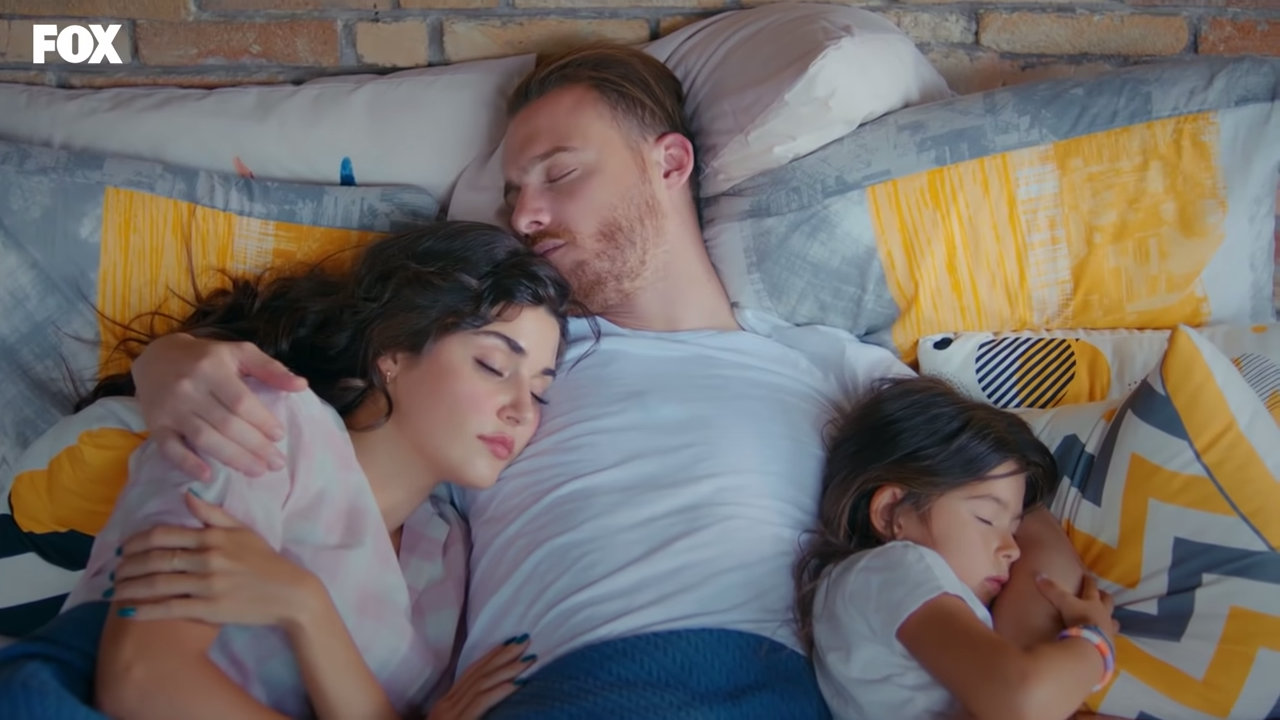 The world survives into another day

And I'm thinking about eternity

Some kind of ecstasy got a hold on me *

Sen Cal Kapimi provided a quiet but productive episode this week where Serkan and Eda got to bond a bit more and Eda expressed her fear of Serkan hurting her again. This is the last impediment to their reunion, Eda does not trust him to stick it out when things get hard. He has bailed on her too many times. Serkan recognizes this and both with words and with actions is trying to reassure her that he desperately wants her and their new little family and that he won’t leave again. He also realizes that it’s going to take some time for Eda to believe him. Leaving aside the amnesia episodes, which I think we are all trying to forget, the relationship development of Eda and Serkan has been interesting and gratifying to watch. These are complex people but they do try and put the other person first and, especially now, they are trying to be more mature in their relationship progression. It was heartening to see this episode that there wasn’t any silly bet or any such thing, they just both expressed their desires and their fears. These kinds of things are cinematically less engaging sometimes, but this is what the audience has been clamouring for, some good conversations between the two of them.

Fortunately, their meddling parents were busy with other drama so it gave Serkan and Eda some time to be alone. The whole ‘auditioning’ for the primary school was silly but I would much rather watch them goof around with Engin and Piril than have to watch anymore Aydan/Ayfer scenes.

The series is winding down, we have only six episodes left, so I will take some good heartfelt conversations over rom-com silliness any day.

Eda quietly but succinctly expressed to Serkan that she is not over him, but she is still carrying the hurt of the past. He may be trying to tell her how much he loves her, how he will never leave again, how he wants them to be a family and even add some more kids to the mix, but he has told her these beautiful things before and then brutally abandoned her. She is gun-shy and isn’t convinced yet that this time things will work out for them and you can hardly blame her.

However, there is no question that she desperately wants it. This was the episode where she verbalized it to Serkan. She has, until now said that she doesn’t want him back, now she is saying that she is scared to want him back. Admitting that fear to him, while it’s likely he was already aware of it, allows him the opportunity to take the step he needs and say the things he needs to reassure her.

Serkan as a watermelon salesman was hilarious, I have a feeling that a lot of that was a Kerem ad-lib. Why we spent five minutes on how to tell a watermelon is ripe I don’t know, but Kerem is so entertaining to watch and it was also fun watching Hande try and keep it together in these scenes. Also, Serkan being grossed out by Kiraz's tooth was very funny.

I love that Kiraz and Can run circles around the adults in their lives. The production is using these young actors to good effect and are not making them overly cute or precious. I’m enjoying having kids in the story much more than I thought I would.

It seems as if, from the ending scene and the fragmans for episode 47, that Eda and Serkan are well on the way to reconciling. This is great news as it means we will have lots of episode time to spend on wrapping up their storyline. Too many other diziler have had very rushed final episodes so I am very glad that it looks like we will get to spend several episodes with Eda and Serkan being happy together with Kiraz. It will be interesting to see if they give us an epilogue showing their future.

I had another dream about lions at the door

They weren't half as frightening as they were before

But I'm thinking about eternity

Some kind of ecstasy got a hold on me. *

I like that Eda and Serkan have another couple to hang around with and talk about relationships and children. These four actors work well together and even when they are supposed to be at odds with each other it’s fun to watch them on screen. They resolved the Engin and Piril ‘cheating’ storyline quickly, which is good. I am enjoying them as a couple finally. Anil and Başak are both good comedic actors and now that Piril is no longer so shrill they are really fun. Did I love the school audition setup? No, but there is going to be filler in the episodes until the end, and watching Anil and Piril and Serkan and Eda have a dance-off was much more fun than having to watch anymore Aydan scenes.

I am glad that Kemal has turned out to be Serkan’s real father. I know some people are upset that if Alptekin isn’t his father then the first break up of Serkan and Eda was unnecessary because Serkan didn’t need to feel guilty about his father killing her parents, but that storyline is still valid because Serkan was working from the information he had then so our current story shouldn’t take away from that. I am just glad that Serkan will have one decent parent, and maybe it will help to heal some of the trauma of the past for him.

Spoiled man-child Serkan is not my favourite Serkan. He has NEVER shopped in a market before? That doesn't seem remotely realistic even for a very wealthy person. And he was so petulant about having to go? Not fond of that.

I understand that Aydan lying to Serkan about her relationship with Kemal would cause Serkan to be angry with her but declaring that older people shouldn’t have romantic relationships was idiotic and then being snarky and cold to Kemal is uncalled for. He and Aydan have the weirdest relationship, one minute they are very close and then he doesn't speak to her for months. I put it down to writer inconsistency. But I don’t love this version of Serkan.

So, as predicted, the production is trying to redeem Aydan once again. I will never be on board for this revamp of her character. She has done too many mean and unforgivable things to both Serkan and Eda for me to be able to come around on this character. Plus, the way they have let her off the hook about Kemal being Serkan’s biological father irks me. But I see the purpose in not making her ‘responsible’ for keeping father and son apart for 35 years, that isn’t something Serkan would ever forgive her for. It bothers me so much that she is getting a happy ending before so many other much more deserving characters.

It’s hard to say where the Melo and Burak relationship is going, they may still be planning on putting them together in the end. I’m glad if Melo has someone to love her but I don’t like the setup that he was in love with Eda first. Melo deserves to have a man be madly in love with her.

Ayfer needs to stop trying to meddle in her adult ‘daughter's' love lives. Why she thought she had the right to call Burak and tell him where Melo was is beyond me.

Sen Çal Kapimi is nearing its finale and the writers are laying the foundations of the final few episodes. Serkan and Eda have one final family drama to get through before the end and let’s hope that they weather it together. It’s been quite the journey with this show and I for one am looking forward to some happy and fun scenes. The whole world is on fire right now and coupled with all the pandemic stress that is still going on I would love to just have some romance, comedy, and love to watch for the next several Wednesdays.

You be in me and I'll be in you

Some kind of ecstasy got a hold on me *

Sorry to say but this once loved dizi just gets worse and worse every week. THİS was "heartfelt conversations over silliness"?! Really? They dirty danced to get their kid into school, their big 'communication' scene lasted all of seconds, their chemistry (like the dialogue) has become flat and awkward... İt's just painful to watch. I love Hanker and loved Edser and they deserve so much better than this poorly written schlock. So do fans. İt's been a rough road since 28. Should have ended series there.