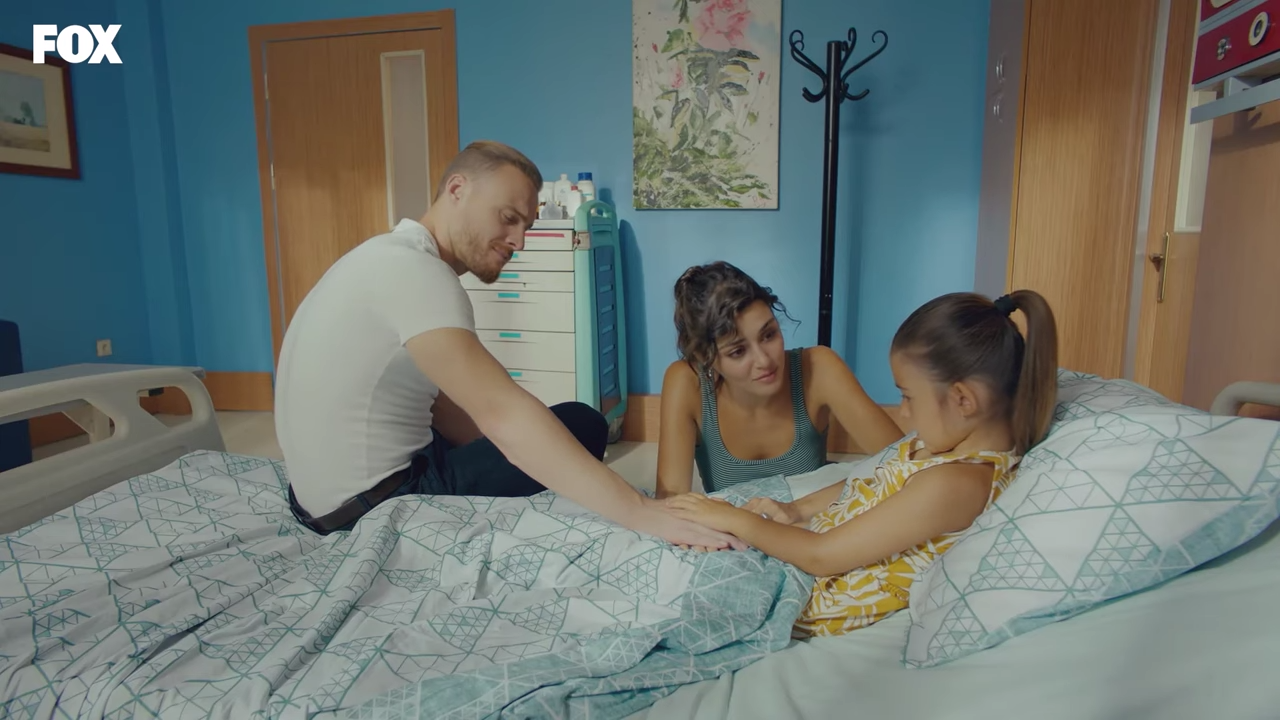 And when your sorrow is comforted (time soothes all sorrows) you will be content that you have known me. You will always be my friend. You will want to laugh with me. And you will sometimes open your window, so, for that pleasure...And your friends will be properly astonished to see you laughing as you look up at the sky! Then you will say to them, "Yes, the stars always make me laugh! *

An interesting shift of gears of SÇK this week to mostly domestic scenes of the new family that has been created. Serkan has moved into Eda’s house for a few days to give them all time to adjust to their new roles in each other’s lives and for Kiraz to get used to having a father. Serkan is desperate to make this situation permanent and is willing to do anything to make that happen. He and Eda haven’t yet worked out their trust issues though so this isn’t going to be as easy as he might have hoped. I know some of you just want them to be together already, and I understand that it’s been 45 episodes, but if we want to be somewhat true to life it’s going to take some time for Eda to trust him again and for them to heal all the wounds of their past. Add a new father for Serkan into the mix, and it’s going to be even further delayed.

It was a rather quiet episode until the end but there were some beautiful family moments and some good comedic scenes. However, it was actress Elçin Afacan’s episode to shine. I am so glad she had more to do this week than be a babysitter to Kiraz and although she isn’t seemingly to get the happy ending we have been wishing for her it was a great episode to showcase her acting skills.

All the family scenes were wonderful, Serkan is rather seamless sliding into his role in his daughter’s life, and it helps that she is so much like him, they understand each other already. It was Eda’s turn to have the heart eyes watching her daughter bond with Serkan. The scene of the two of them snuggled on the couch watching a movie was particularly sweet. Did we ever think we would see Serkan Bolat, in house slippers, eating popcorn, and watching movies with his daughter? Or have him talking about the Little Prince to Eda and Kiraz and tell them that Eda is his Rose and Kiraz is his little Fox.

These scenes and the ones of the three of them making breakfast serve to showcase that Serkan does have a place in their lives, that the three of them as a unit works well, and that they need him. The idea that he would think they were better off without him is being wiped away by the day-to-day magic of having a life with the people that he loves and who love him. Serkan has deep-seated insecurities that he isn’t good enough, but living with Eda and Kiraz and getting to see that not only does he fit right in but that they have craved his presence, and this will hopefully help him to overcome that feeling of unworthiness.

Serkan has won over Kiraz but Eda is still keeping him at arm's length. Thanks to some deft manoeuvring by Kiraz, Serkan and Eda are sharing a bedroom but she’s insisting that he sleep on the floor. In the cockiest move, he sneaks into her bed when she’s asleep under the guise that he was cold. It’s July in Turkey, Serkan, no one is buying that one. He is pushing his luck though the next night when he removes the bed on the floor altogether. Eda shows him that she’s not on board with casually sharing a bed with him when she pushes him out onto the balcony to spend the night there.

It was gratifying to see Eda and Serkan try and put some boundaries between their own little family and their meddling extended family, it’s long past time to do that. I did appreciate the introduction of Hulya as a psychologist has allowed for some movement with things because she is forcing them to all be honest with one another. She tells them all that they shouldn’t have secrets amongst them. The biggest ‘reveals’ are that Serkan and Burak don’t like each other and Seyfi blurts out that Aydan has been in a relationship with Kemal for five years. No one is surprised about that except Serkan.

I am totally onboard with Kemal being Serkan’s biological father and have predicted that this was the case since Kemal was introduced in Sen Çal Kapimi back in episode 35. Kemal is a good man and Serkan deserves that for a father. This turn of events will lead to some drama, no doubt, but it is a happy circumstance and organic to the story, not some out of nowhere plot device to create tension, so I think it will be good.

The final scene was very special. Kiraz accidentally eats strawberries, good job Erdem, and is rushed to the hospital. Serkan, of course, blames himself stating that she had been fine until he came into her life. She wakes up to tell him that she’s glad he came back from space, it’s good that he’s with her, and she calls him Baba for the first time. Cue the crying. A small thing that is actually monumental to Serkan and I hope that this will solidify for him his place in her life and the fact that he is more than up to the task of being her father.

Once again I felt myself frozen by the sense of something irreparable. And I knew that I could not bear the thought of never hearing that laughter any more. For me, it was like a spring of fresh water in the desert. *

Melo has been given an actual plotline! I mean, it’s not great but at least they are giving her something to do outside of being in the Yildiz family. She’s got feelings for Burak but he’s hung up on Eda. I don’t know if they are going to have him fall for Melo ultimately but it seems possible. The nice thing is that they are giving actress Elçin Afacan some meaty scenes to play. She played the heart of realizing that Burak didn’t remember the night before so beautifully. I also love that Ayfer is willing to quit her job to be with Melo if she needs it and that Eda knew there was something wrong with Melo and was there for her.

Serkan quitting the Şile hotel project because Eda has quit and giving Kerem a chance and a place to stay in Istanbul was very sweet. He also gave her a potted rose and swore he would give her one every day. Poor boy is trying his best to win her back. He tries to see if she still loves him by charming Melo into bringing the colour changing mug to Eda, but Eda doesn't fall for it. I really can't imagine that he doesn't know that she still is in love with him but maybe his insecurities run that deep.

Outside of Aydan, I am so excited about Kemal and Serkan being father and son. A major portion of Serkan issues stems from the neglect that both his parents showed him but Alptekin in particular played a huge role in the creation of Serkan insecurities. His judgment and abandonment of Serkan have created a man who feels unworthy of love. Now finding a new father in a man who is decent and kind will hopefully give Serkan some measure of peace.

Piril thinks Engin might be cheating on her, I'm sure this is going to lead to some drama but also some comedy. Was anyone else mad when Erdem was laughing about cheating on Leyla? I still don't get his character.

Will Aydan ever not be on the top of this list? I can see that we are on the journey AGAIN to try and rehabilitate Aydan. She was much softer and much lesser screechy this week and at least pretended to be concerned about Melo feeling sad. It’s much too late for all this to my mind, they have had Aydan be so selfish and narcissistic for too long to be able to bring her back in any real way, but they are going to attempt it. The recon of the story and the storytelling gymnastics they have already done says to me that they are going to try and make sure that the audience doesn’t view her as a cheater or a liar. We will be expected to accept that she was getting divorced from Alptekin, which they have never mentioned before, that she only saw Kemal the one time, although in episode 15 she told Serkan that she never saw him again, and didn’t remember sleeping with him or couldn’t do the math about that after she became pregnant. It’s not realistic to expect the audience to believe all that but here we are.

She will tell Serkan and Kemal they are father and son.

Serkan will be disbelieving and angry at first, but will then come around, I give that about one episode, maybe two. Kemal will just be happy their relationship is out in the open and will slowly try and connect with Serkan. I just have to accept that Aydan will be allowed to be mean, selfish, and self-serving and have no character, other than maybe Ayfer will call her out on that. Aydan never admits her faults and is never held accountable. I would love to be wrong about all this but given how they have re-written history to not have her be a cheater and a liar who has kept her son from his real father for 35 years, I don’t have much hope of this.

I don’t like how they are progressing the Burak and Melo situation IF they are planning on ultimately putting them together as a couple. I want something more for Melo than to be the second choice.

We are winding down the series but we still have seven episodes left so I think we are going to have to be patient about a reunion between Serkan and Eda. We will be dealing with the Aydan revelations next week and maybe the week after that so that’s going to take up some screen time, and Eda isn’t ready to forgive Serkan just yet anyway.

I am trying to be zen about all this because the series is coming to a close and I will miss it when it is gone, but we almost have too much time left for it not to be dragged out. I have to learn to be happy with the great scenes we have been getting with the new Bolat/Yildiz family and ignore most of the rest.