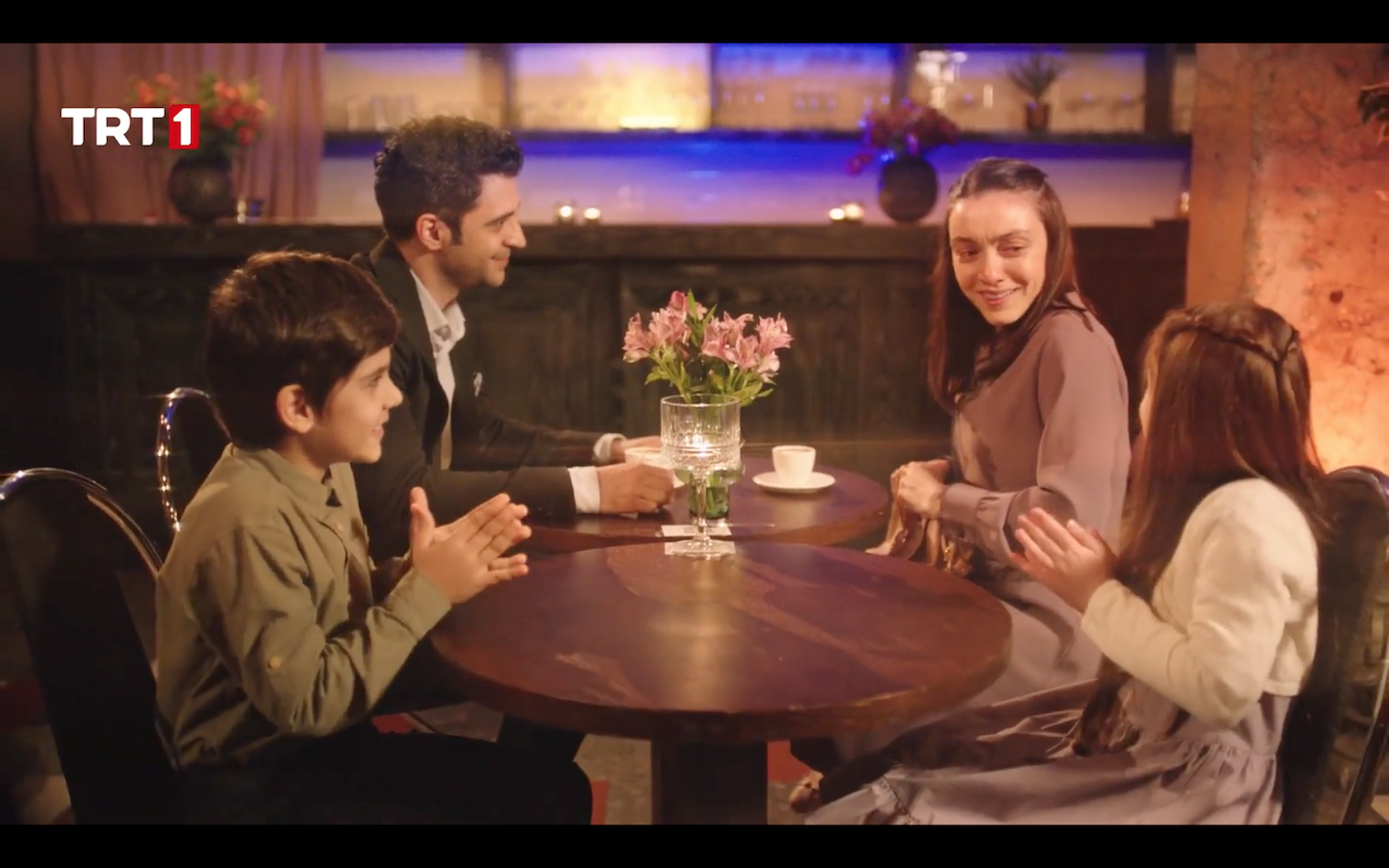 Episode 32 contained some of the sweetest moments and some of the most absurd. Read on to learn more. Spoilers follow.

Are they the cutest or are they the cutest? Her tears of joy in response to him asking her to be his girlfriend were beautifully translated. She could not contain her delight, having loved him consistently for 25 years without any hope that he would actually reciprocate some of her affection. The fact that he now not only seems smitten with her, but that he is as kind and gentle with her as she deserves is the stuff  dreams are made of.

She was so overwhelmed with happiness that she was unable to pick up Inci’s phone call, telling Esat to take her phone and speak to Inci in her stead. This was a splendid progression of their relationship as she trusted him enough to let him touch his ear to her phone sans tissue or barrier and speak to her family for her. A subtle and elegant way of showing that these two hearts are slowly becoming one.

This scene was soon followed by another swoon worthy moment, perhaps the best moment of the entire episode, when, after walking Gulben back to her apartment building, Esat leaned close to her, and kissed her cheek! Though the direction this episode slowed the pace of the scenes considerably (and somewhat exasperatingly) for this scene, the slow pace was absolutely needed as it allowed Gulben to showcase all of her simultaneous happiness and fear in response to his heartfelt gesture.

Bravely composing her jumbled response to his kiss, she hurriedly tells him that she was worried about Safiye seeing them, soothing his fear that he had overstepped, and bidding him farewell for the night. Thereafter, Gulben rushes upstairs to the Derenoglu suite and when she finally reaches her home, she pauses for a moment to see her young self shining merrily at the fact that despite her fear, she did not have an accident. Another beautiful example of how the human heart, when nurtured, can and does cure longstanding traumas.

And, the cherry on top of this scene? After emerging from the bathroom, Gulben confided in Inci, who was equally, if not more pleased at the happy night Gulben had, which would not have been possible without her gentle subterfuge in convincing Han to allow Gulben to have dinner with Esat and telling Safiye that Gulben was coming to their celebratory dinner with Baris. Though Gulben is extremely loyal to Safiye, it is lovely to see her open up to Inci and to Esra. Bravo to the cast and crew for devising and executing such a wonderful story! 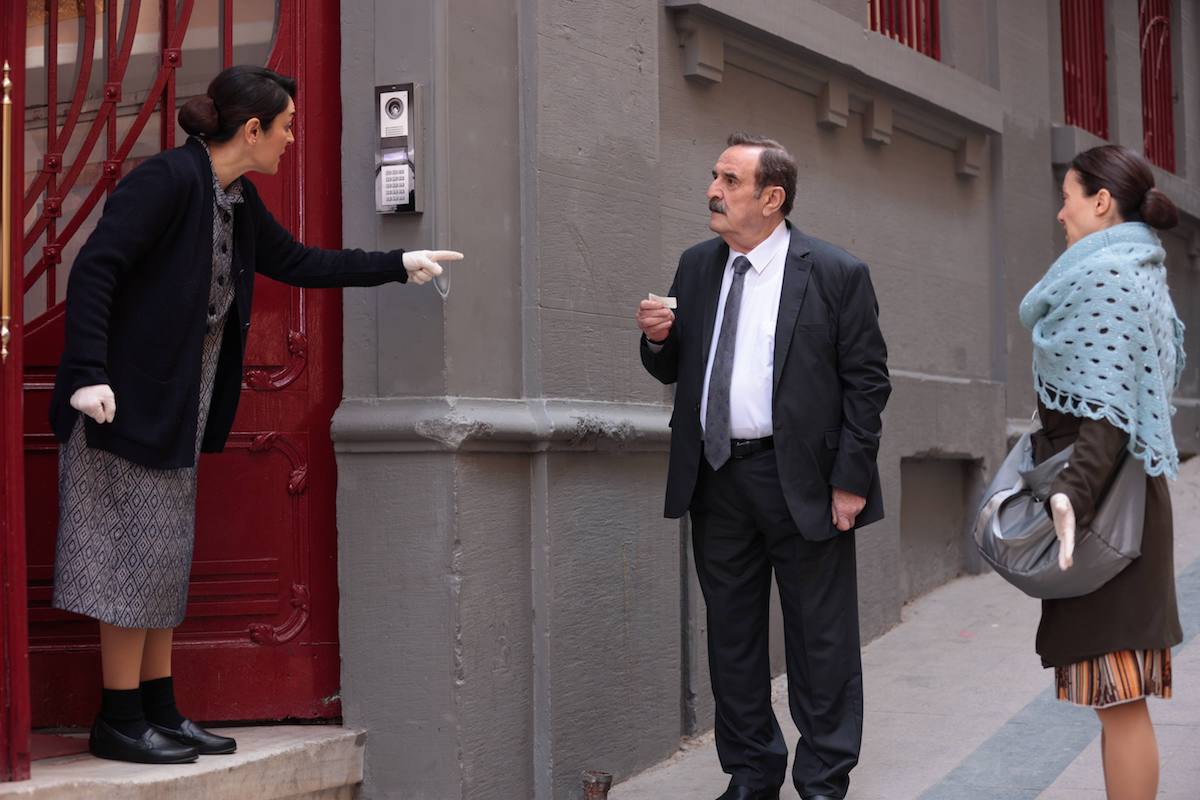 Hikmet Bey’s dementia seems to appear and disappear at the most inopportune times. Though some of his moments of “fatherly care” where he is upset with Esat or concerned about Safiye’s feelings for Naci can be sweet or comical, the opening scene this past episode was over the top in a cringe-y way. It seems that in Hikmet Bey’s mind, Naci has treated Safiye so terribly that she is not even permitted to read a note that he has written, where he is asking for help, so he throws the note off the balcony, where Gulben, who is returning from dropping Neriman to school (or more accurately to Ege), catches the note under her shoe. Safiye begs Gulben to hold the note under her shoe until she arrives at the entrance of the apartment building, followed by a surprisingly able-bodied Hikmet Bey, who also appears and quickly snatches the note from Gulben’s gloved hands, swiftly stuffing the paper into his mouth and swallowing. As far as obstacles go to keep Naci’s whereabouts a secret from Safiye, this felt deliberately frustrating. Maybe it was karmic retribution for Safiye, who refused to read Naci’s penultimate note to her where he told her about his illness, tearing it to pieces in front of him? 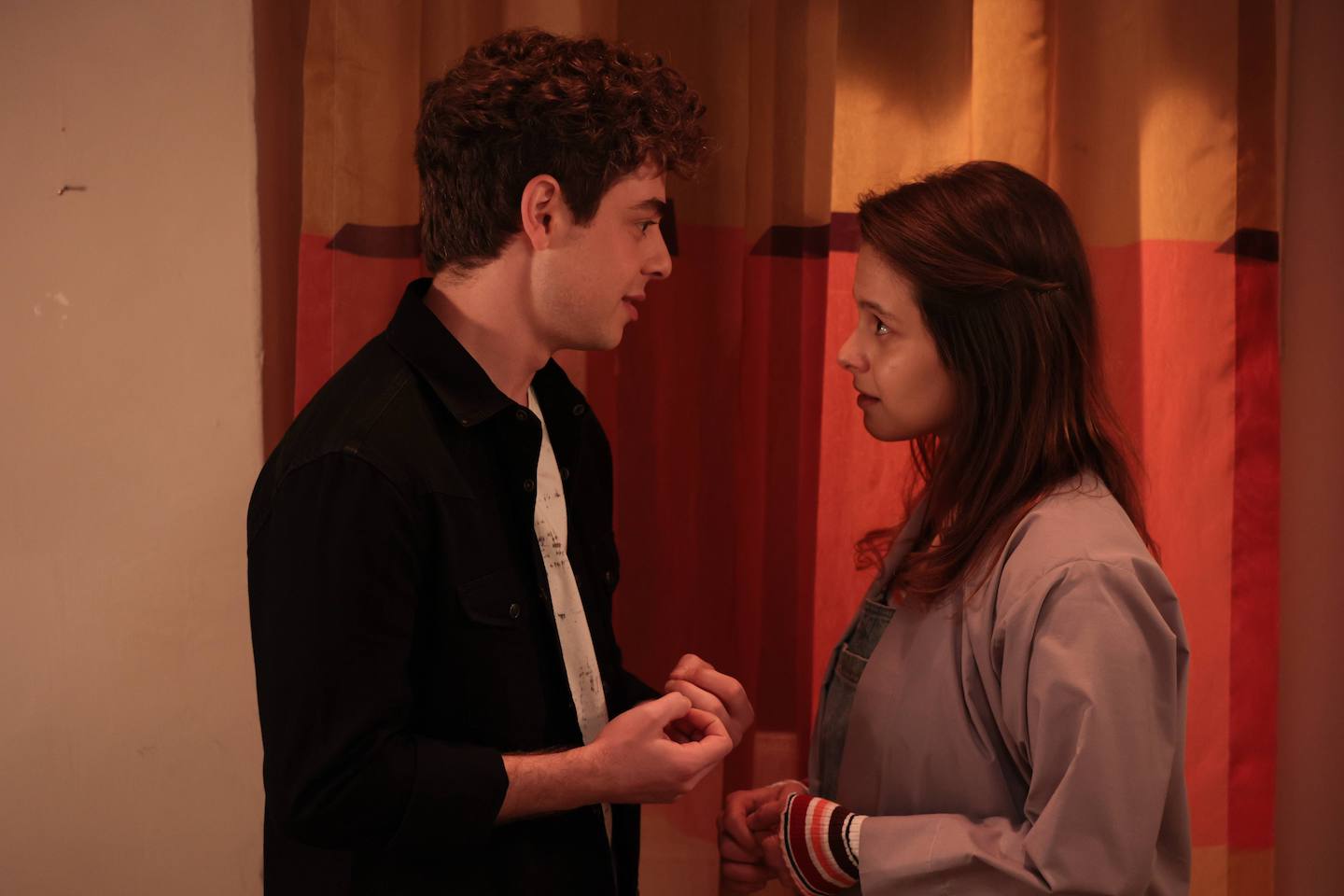 If his world is a swamp, she is his lotus/water lily inducing him into a state of dreamy contentment. Such candid words would melt even the staunchest opponents to their love, or at least they did transform Gulben’s view of Ege, allowing her to let Neriman walk beside him to school the following morning. Although their situation is idyllic, Neriman is determined to leave Istanbul for college and Ege refuses to leave his grandfather; their may be fork in the road ahead for these two young lovers as graduation approaches, but for now, their sweet declarations are absolutely adorable.

Showing up at Esat’s office, intruding on Gulben’s path to drop Neriman to school, and appearing at the restaurant where Esat and Gulben were having dinner, Ali Bey is becoming more and more aggressive in pursuing Gulben. Although he tells her that it doesn’t bother him that she doesn’t love him back, his actions suggest otherwise. Gulben is naive enough to believe that he is harmless, but these interactions are probably leading towards a season finale that will have Ali Bey capture or threaten Gulben. None of the other characters are expressly aware of his “relationship” with her, but Han, Inci and Esra will likely slowly begin piecing together Ali’s interest in Gulben and how these feelings may jeopardize Gulben’s safety and well-being. On the other hand, Ali Bey’s sleuthing may help reunite Safiye and Naci, as he has found the note that Han ripped apart in the trash, and may help deliver it to Safiye. As has been the case on this show, he is a character with grey, and though he mostly comes across as creepy, some of his actions may lead to some good. 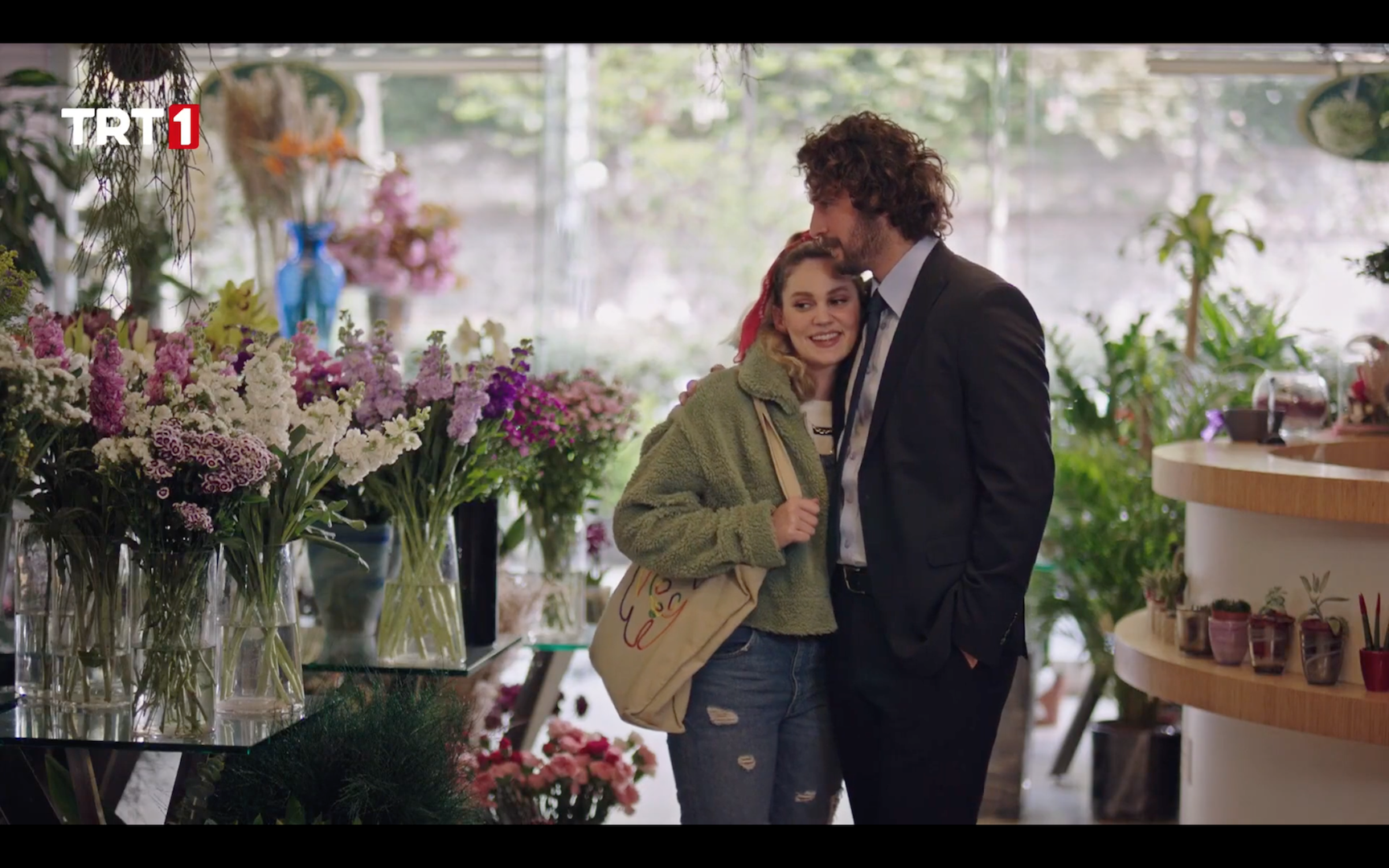 When they are alone together, selecting flowers or discussing their future children, there is a harmony between them that visibly shines through. Han teases her about the orange (Baris), but also confides in her of his fear that her knowledge of him and his “habits” will cause her to leave him. Hearing the same feelings of worthlessness echoed by Gulben and Neriman, Inci responds to him with loving eyes, telling him that she loves him more for sharing his traumas with her because she knows he is trying to heal. Though Inci may sing a different tune when she finds out that he has quit therapy and that he has imprisoned Naci in the basement, it is nice to see these small moments of kindness and devotion between them.

As we anticipated, this jealously plot is quickly becoming more uncomfortable than cute. Inci and Baris (and Esra, though she barely spoke), had their first radio show, where Baris “teased” Inci about selecting the topic of “regret” because she internally regretted her 4-month marriage to Han. The trouble with his opening remarks for their show is that they had a bite to them that wasn’t warranted; it seemed deeply inappropriate for him to bring up Inci’s marriage and her past with Uygar without any context on a public radio show. The tone seemed berating, where it should have been lighthearted. And, to add insult to injury, Inci just laughed at everything Baris said, as though his remarks were entirely normal. Where is the discerning, assessing Inci that despite loving Han and marrying him, waited for so long to tell her grandfather about their union? Has the tension in the Derenoglu household affected her so much that she craves some amount of normalcy and freedom in the form of Baris? Now, Inci is a beautiful character, but one of her flaws may be that she seems to allow for some overlap in between men she cares for, sometimes starting a new relationship before ending the first: she was with Uygar for two years and left him as soon as she met Han; maybe she is unconsciously feeling that she needs a break from Han and his family, and is gravitating towards the “overly-friendly” Baris as a nostalgic part of her past? Though not as troubling a situation as the Gulben-Ali interactions, Inci’s lackadaisical attitude towards Baris may create some problems for her later. Even, Esra, Inci’s closest confidant and this writer’s nominee for best dizi friend, seemed concerned as she observed the two of them interact.

The treatment, for which Han has imprisoned Naci, will allow Naci to take an experimental drug that will be put on the market in the following year. Deadset on “protecting” Safiye from pain, Han (just as Hikmet Bey before him) threw Naci’s letter to her in the trash, shamelessly lying to Naci that he had in fact delivered it to his sister. In Han’s mind, it seems that only if Naci is healthy can he be permitted to interact with Safiye. This is a ridiculous premise and though Safiye has her faults (see the hazmat suit at the ask ceremony), Hasibe abused her the most. The fact that these men (Hikmet Bey and Han) believe that they are ‘protecting’ her from additional hardship by keeping Naci's illness or Naci's letters from her is entirely preposterous. Despite the foolishness of these plot developments, the best part of the dungeon scenes is that they provide a space for Han and Naci to interact and converse; their dialogue about fear and hope was deeply insightful and thought-provoking. These two characters could not be more different, making their interactions exceptionally riveting and meanginful.

As the episode neared to the end, we were introduced to another new character, an old family friend, who knew Hasibe and understood her level of ‘crazy’. Han invited her to their apartment, or more precisely to sit outside of their apartment suite, after Hikmet Bey’s overdose on chocolate. She seems to be a no-nonsense kind of woman and I hope that this new character will force Safiye to talk more openly about Hasibe. I like her already. 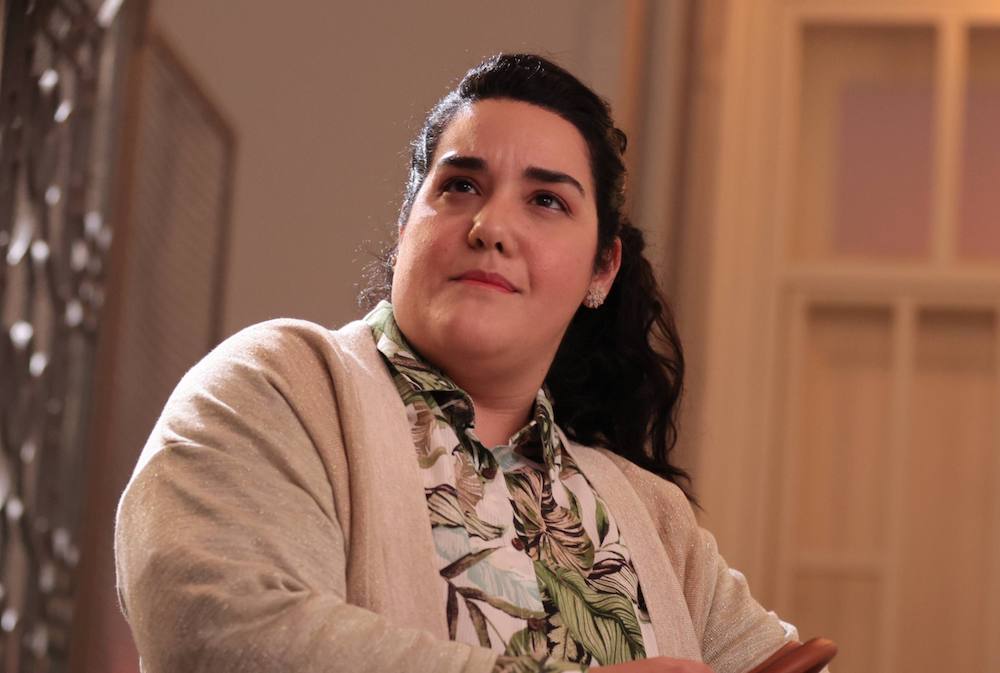