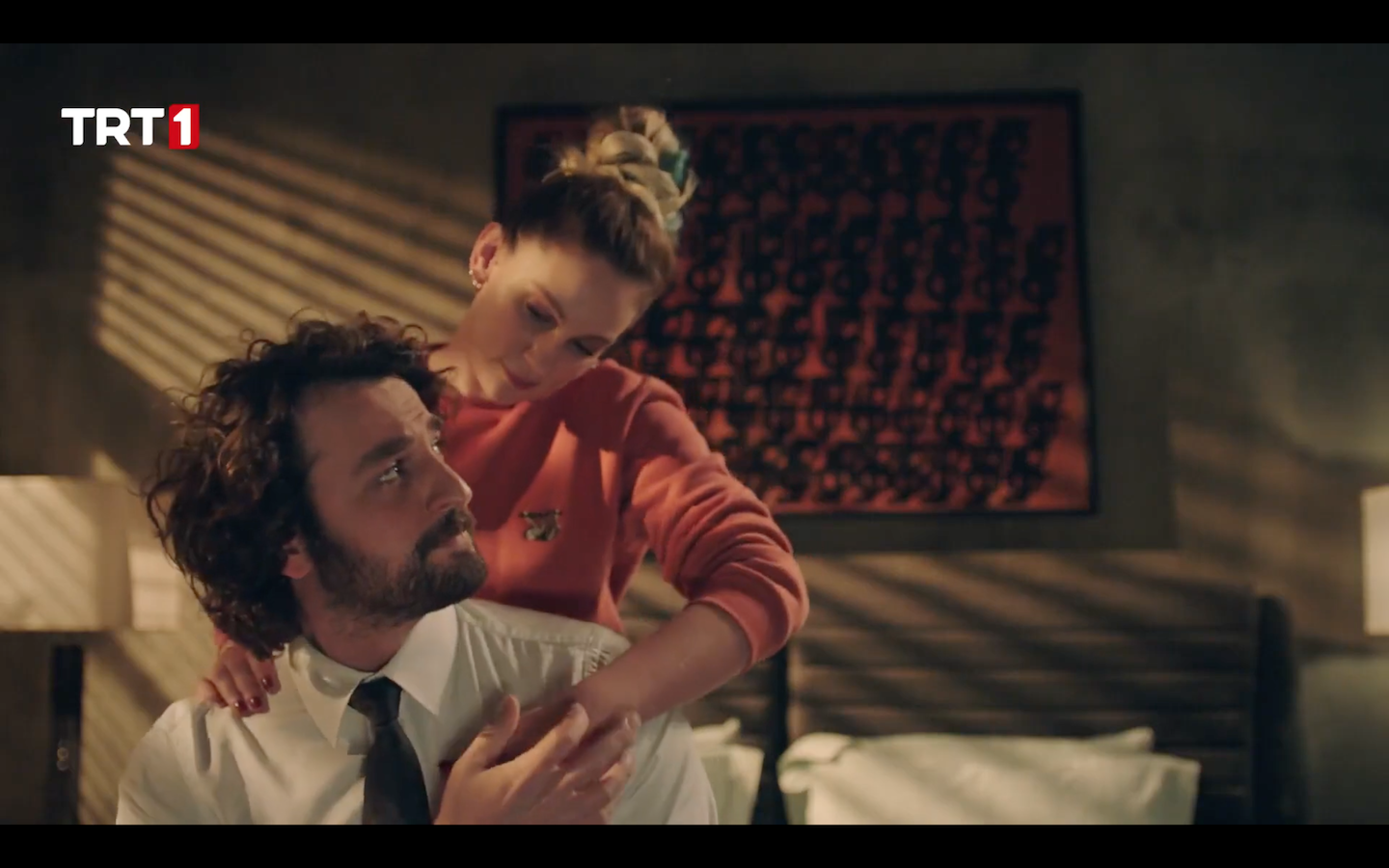 After many episodes of seeing only the darker side of Han, this week we finally saw the charismatic, kind and loving Han. Reverting to his classic self, he lies to Inci about the truth behind his problems, not disclosing to her that Anil may be responsible for hurting Esra and not telling her that he quit therapy; instead, he lets her believe that he had a tough therapy session and lets her massage his shoulders after a long day, telling her that each knot in his back was caused by one of his siblings, but that she, resided solely in his heart. It was a sweet moment between them after so many that have been fraught with tension; so, while it was perhaps a ‘bandaid’ scene, it was heartwarming nonetheless. 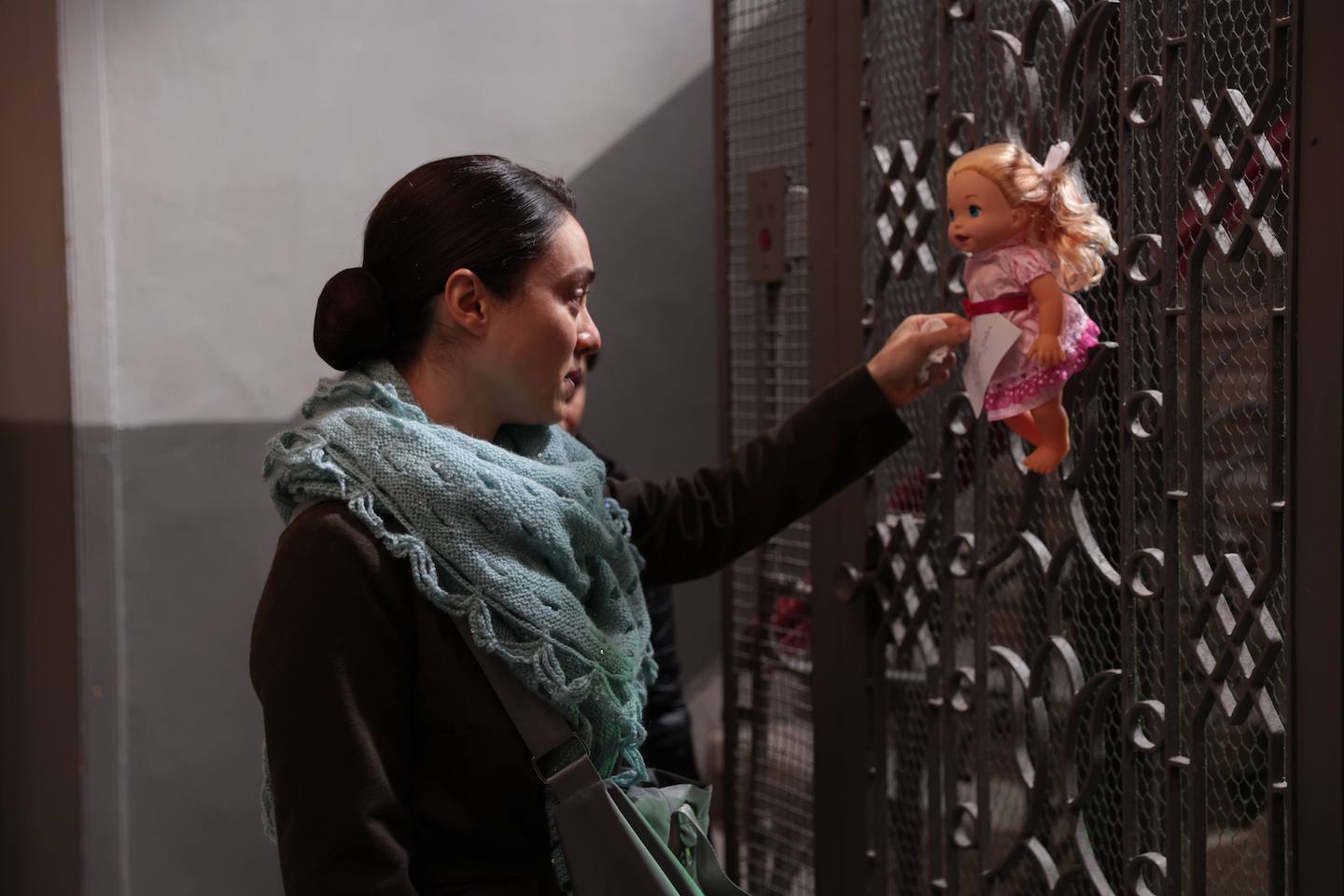 Shockingly, it seems that his quiet, obedient demeanor conceals a somewhat confused and unbalanced individual. While his interest for Gulben has been clear from very early in the show, the ‘shrine’ of sorts that he has built for Gulben in his home, which holds all of her old dolls and books and includes all of the same cleaning products that are utilized in the Deregnoglu household was distinctly concerning. Ironically, he seems to be living in a fictional reality where Gulben reciprocates his regard for her. It seems likely that he was the one who put the note and the Filiz doll on the wall for Gulben, telling her not to change. Though the note was sweet, when placed with the doll and hung up on the wall in this manner, the whole scene became a tinge unnerving.

The scene in Bayram's apartment suite, though short, deserves special mention as it was expertly directed: the audience is slowly introduced to a conversation between a man and his mother, where we hear a discussion of upcoming nuptials with Gulben, but don’t learn who the man in question is, until the camera slowly focuses on Bayram. I confess, I expected Anil to be telling his mother about Gulben and was surprised to see Bayram! 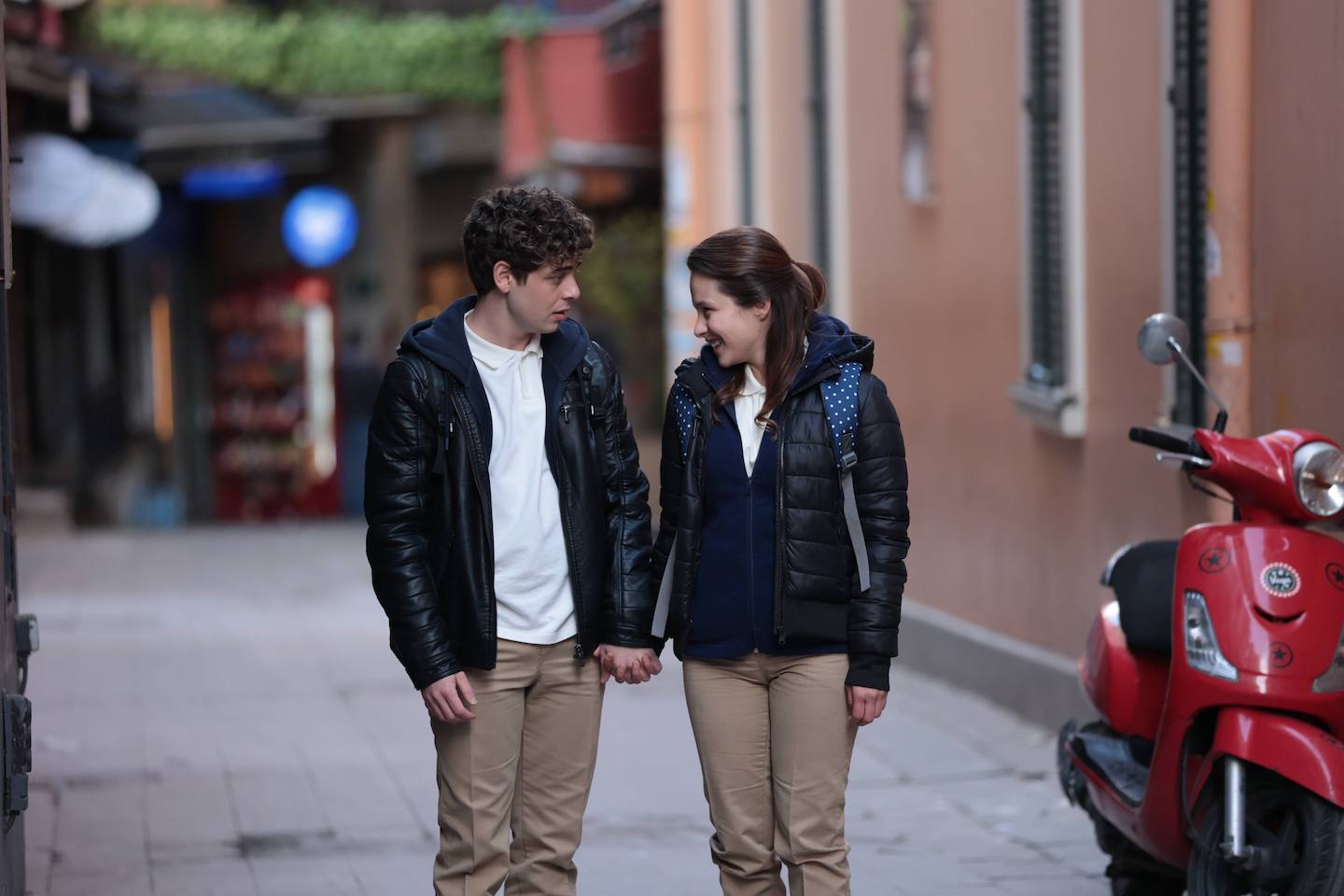 The triangle between Neriman, Ege and Gamze has collapsed, as Neriman loves Ege and Ege loves Neriman, and Gamze is now aware of these developments. Gamze is a fun character, and they may be trying to analogize her to Gulru, but I hope that they focus on other plot points for these young characters. Maybe introduce some career dreams and goals instead of just focusing on the romantic illusions/realities that exist? 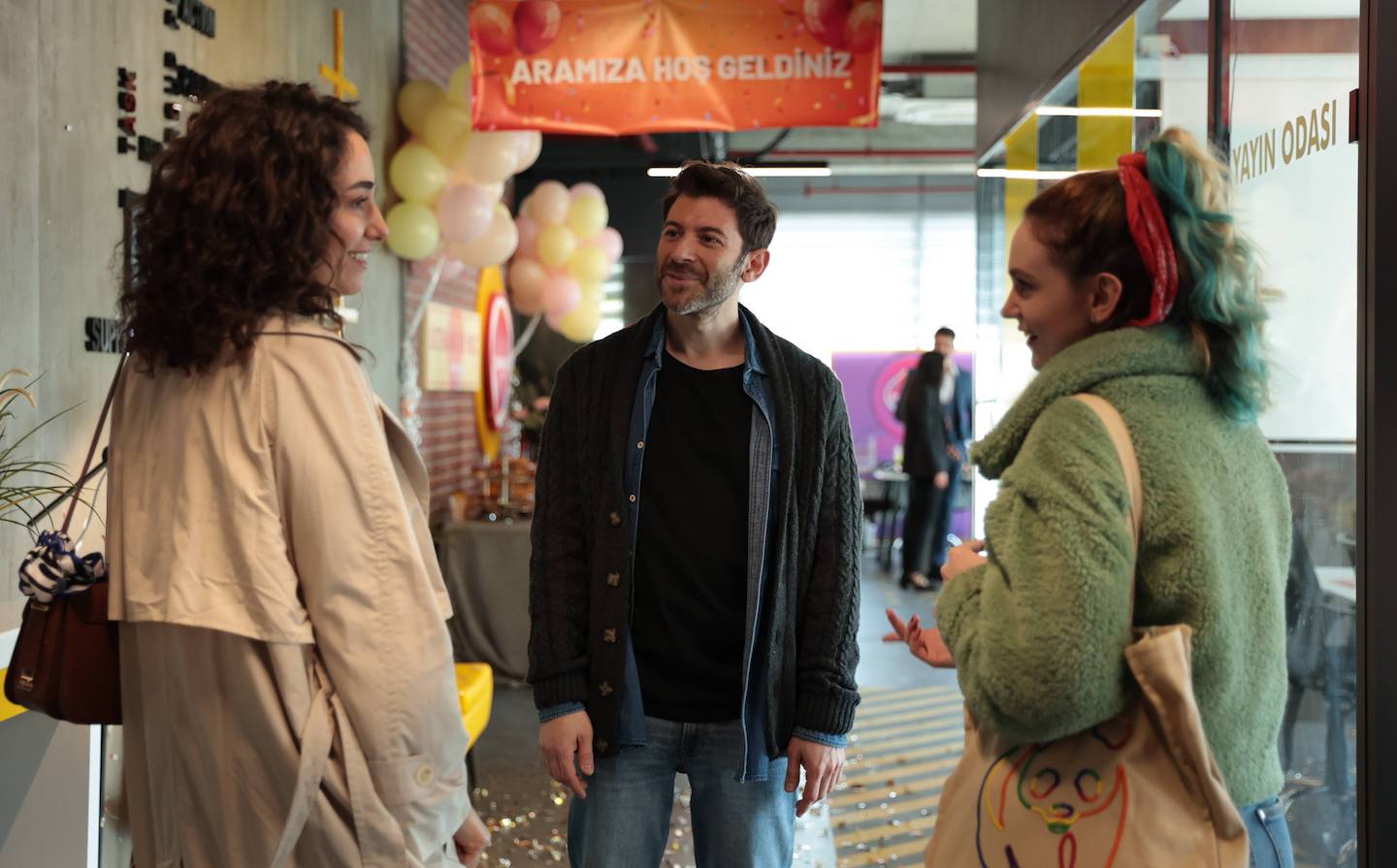 Inci’s new boss seems to have eyes for both Esra and Inci. He is very touchy-feely with Inci and flirty with Esra, in a way that seems far too bold for the tone of the show, where an embrace or a caress is usually the result of much dialogue and character development. While the scenarists seem to have painted Baris as a funny casanova, a bit more subtlety in his character would make his persona more intriguing. It seems he has been cast to create a ‘jealousy’ plot between Han and Inci. This may be a dangerous path to travel upon, as Han does not know how to love or hate with any constraint; so, with the right ammunition, he could really do quite a lot of harm. Be careful Baris! 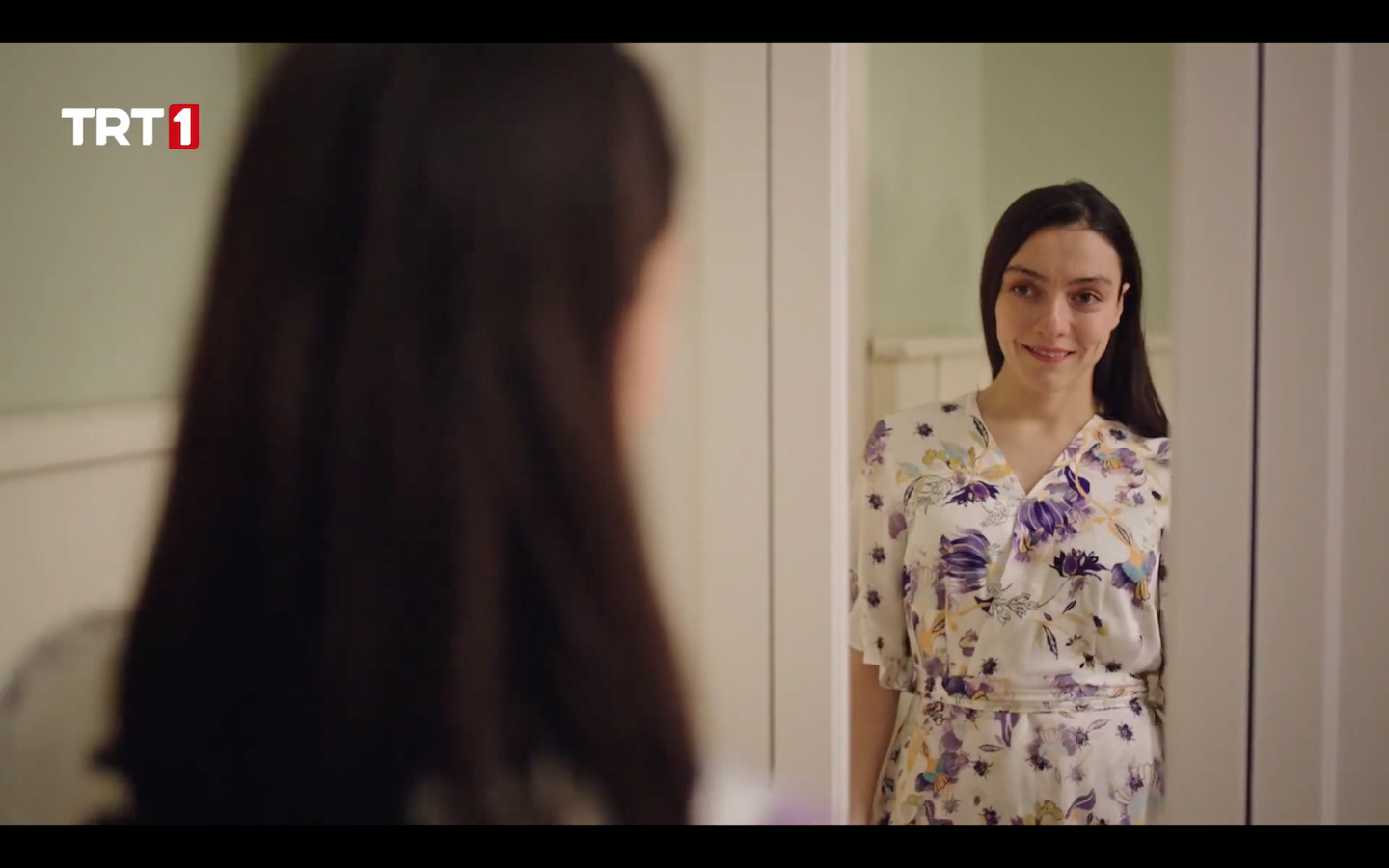 Her character’s trajectory has been very volatile, but somewhat understandable given Safiye’s dominating persona and her lack of any other friend or confidant to interact with. But, this episode, Gulben made a firm decision to reject her childish ways, throwing her dolls away, and ordering new clothes, trying to embrace womanhood anew. She was inspired to take such a step after hearing Han tell Esat that she could not be with him because she was still a child in her mind. This was a big claim, and while I’m happy that it pushed Gulben to make a change for herself, it is surprising that Esat was not more confounded by the situation and forgave Han so easily. The best scene in this episode was the exchange between Gulben and Han on the steps where she tells him that his heart is so small and he is so selfish that he can’t let anyone else love them. Gulben is so desperate for a little affection, and every time she believes it is within reach, it is torn from her anew in such a devastating way. Despite the anguish, she stood up to Han with bravery. Their conversation needed to happen and I hope that Gulben doesn’t renege on her newly made decisions.

Of the three suitors vying for Gulben's affection, Esat and her are the most adorable, and although we don’t know much about him aside from his relationship with Han, he is charming, kind and good. He doesn’t seem to have any flaws aside from getting put into the ‘friend zone’ by women who he is interested in. As for Bayram and Anil, while Bayram’s affection is becoming more obsessive, Anil’s interest in Gulben is alarming, as he has already assaulted Esra, and presumably may choose violence again. The fact that Gulben didn’t tell anyone about her encounter with Anil is problematic, but I appreciate that she tried to normalize his behavior by saying that ‘craziness’ is a result of trauma and unpacked pain; it doesn’t exist in absentia. Though time may prove that her kind attitude towards Anil may cause harm to her, it was an insightful remark, and important dialogue to promote mental health awareness.

I would be remiss if I didn’t mention the delightful scene between Gulben and Esra. Though the Inci and Esra friendship is beautiful, introducing Gulben to more people, and watching her grow and learn with others is the path I hope they take for her story. She has so much more to offer than can be expressed within the four walls of their apartment building. I can’t wait to see her outside more often!

After failing to escape from Han’s dungeon, Han escorts him into a new soundproof room with a bed, removing the shackles and tape that had previously bound him. The reasoning behind Han’s actions is still very spotty at best, but it seems that Han will be paying for Naci to get very expensive treatment, which will presumably cure his previously fatal illness, so that he may help Safiye. If such a treatment exists, Gulru would likely have found it, as she too seemed to be a woman of means. So, while this plot doesn’t make much sense, it does provide some meaningful dialogue between the wouldn’t-even-harm-a-mosquito Naci and the increasingly-violent-and-dangerous Han. The contrast between these two characters is jarring, but Naci’s insightful and gentle approach to Han’s obsession with control and his jealous affection for Safiye was directly on point. Summing up the tension between Han and Safiye in a few lines, the ever poetic Naci tells Han: “Allah gives snow that is fit for the mountain. She (Safiye) is a mountain and you are a hill. This what this whole power struggle is about.” A wonderful reminder of the ultimate arbiter of power and control* and a gentle directive to Han to let Safiye fight her own battles; his role as protective older brother still allows him to let her fight and defeat her own demons.

This episode concludes with Safiye discovering Naci's note in the lunch box, hopefully foreshadowing a new path forward for these two ill-fated lovers that will result in a beautiful reunion! 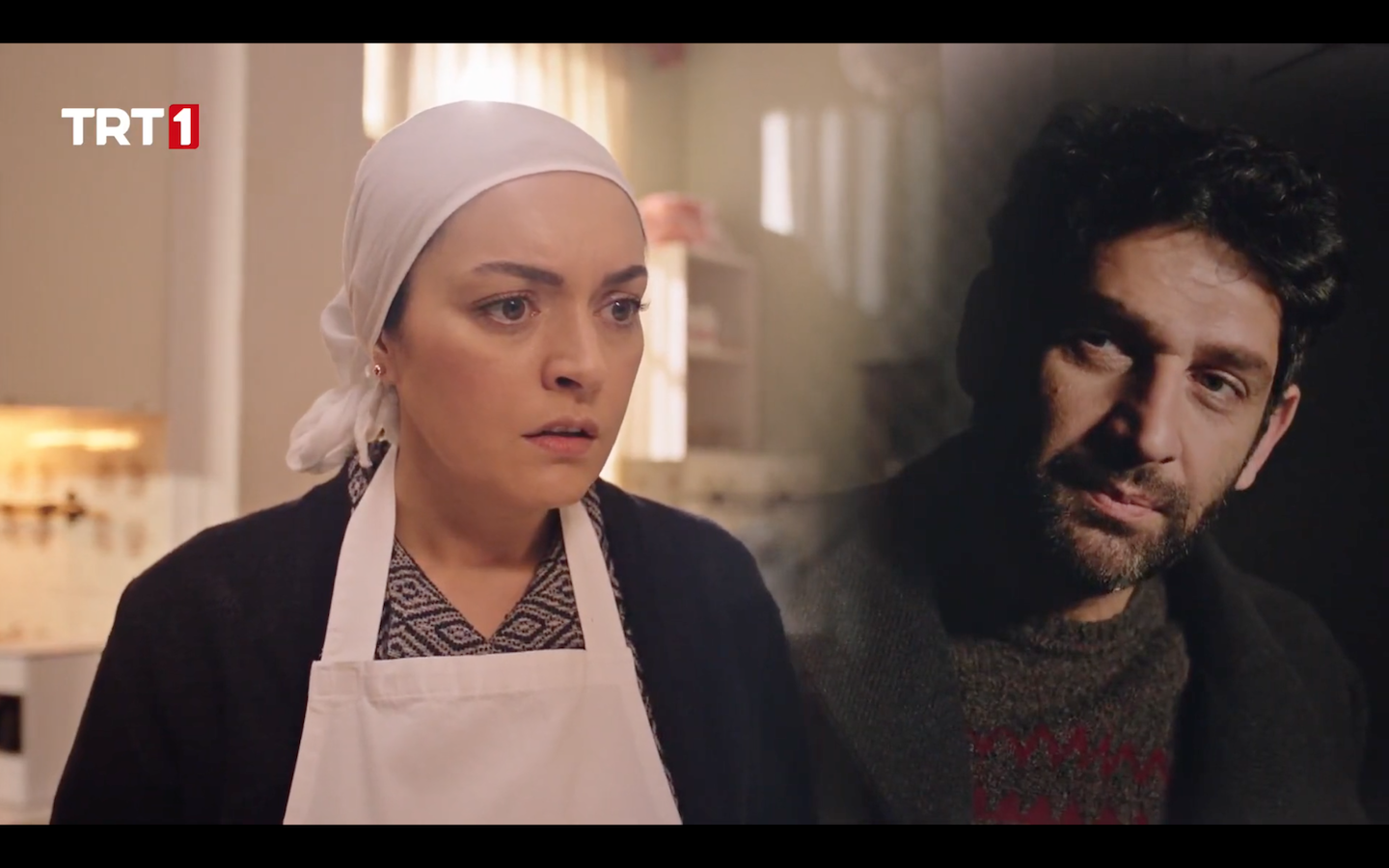 *Disclaimer: This statement was written in the context of the language from the show, and is not a tacit endorsement of any faith or belief system.