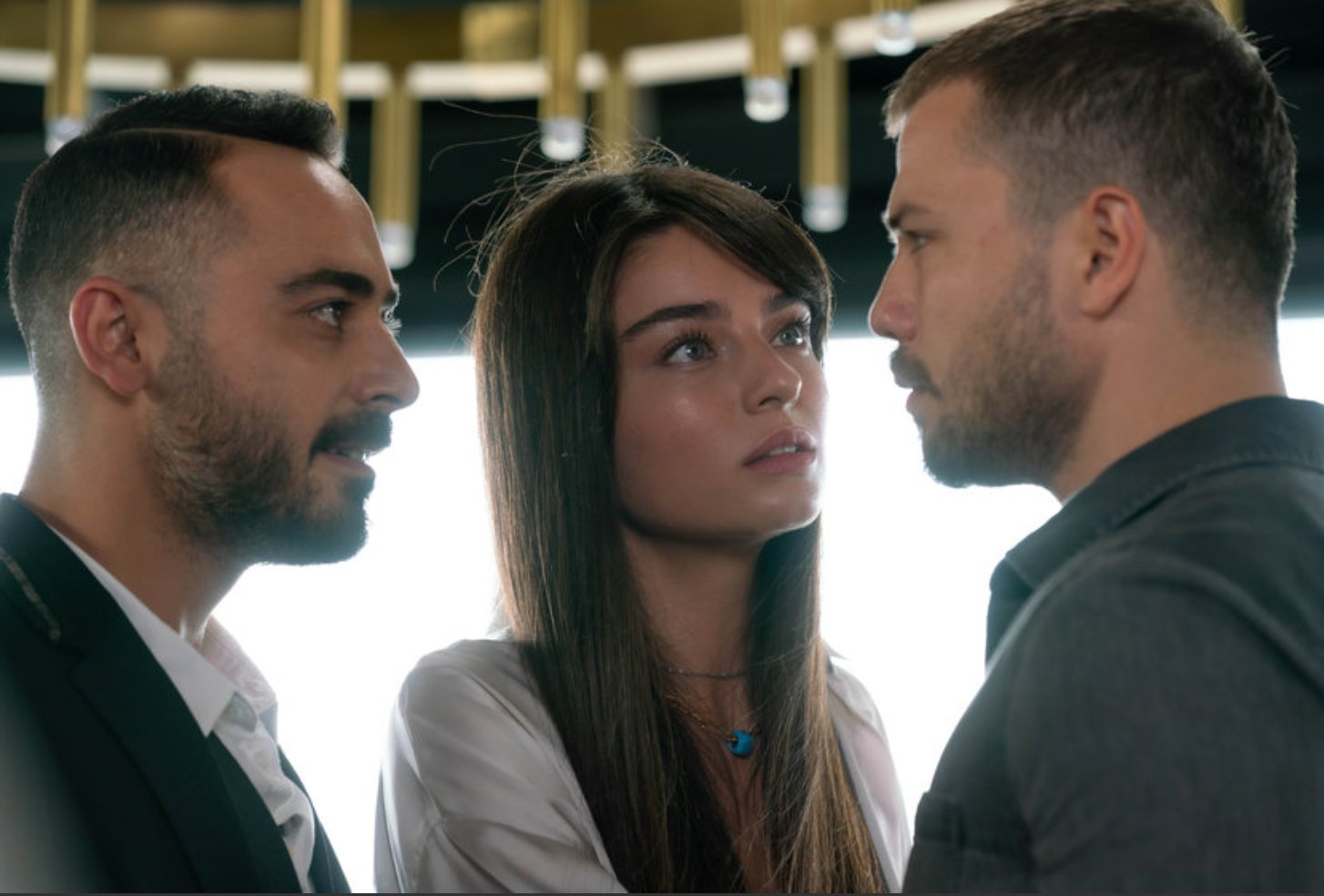 Burak and Ariza face each other again but this time with Halide in the middle.  She attempts to intervene with no luck.  Burak is annoyed that Ariza is there trying to take Halide.  He tries to embarrass him by threatening that he’ll beat him in front of the reporters however Ariza doesn’t back down.  As soon as the situation intensifies and the men are ready to pull out their guns, everyone’s phones start to ring.  They’re all getting word that their respective family members are being taken into police custody due to the situation in Fusun’s office.

Ariza attempts to leave but Halide insists on speaking with him first.  She doesn’t understand why he’s so upset at her.  He wants to know why she met with Burak knowing that he was close to finding Sabri.  She informs him that she’s not the type of woman that needs to be protected.  She explains she got desperate when she discovered her father’s plan to kidnap Murat so she agreed to meet with Burak to try to help Sabri.  Ariza tells her he’s willing to protect her at any cost especially from Burak.  Halide doesn’t appreciate him thinking that she’s the type of woman who stays home and allows a man to guard her every move.  Ariza realizes she’s stronger and more independent than he thought.

Fusun calls the police to report Hasmet for attempting to kidnap Murat however he denies the claim.  He tells the police that Hasmet was just trying to speak with him about a family matter.  The police take them all to their headquarters for questioning.  Fusun’s charges are dropped since Murat denies Hasmet tried to kidnap him.  Murat is very surprised that Fusun stood up for him and basically saved him.  Ariza arrives at the police station to see Fusun.  He informs Hasmet that Sabri is safe and at the hospital.  He leaves with Fusun when Halide arrives.  Burak is there as well to pick up Murat.  Burak attempts to speak to Hasmet who doesn’t pay attention to him for what he did to Sabri.  Halide is not happy that her father was taken in for questioning for attempting to kidnap Murat however her attention is on Ariza leaving with Fusun instead.

Fuat learns Ariza rescued Sabri who never confessed even after being tortured for several days by Burak.  He demands Yashar to take out Ariza immediately to avoid additional problems with him.  Burak is more than happy to get it done and asks Fuat if they should also take out Hasmet.  Fuat tells him he needs Hasmet alive but on the sideline so he can continue to control the consortium partners.

Fusun updates Ariza on why Murat has been bothering her.  She informs him that she recently threatened the guard who confessed to killing Nihan to try to get him to tell the truth.  Ariza tells her that she shouldn’t do anything that will harm her and that they will always remain friends no matter what happens with the case.  Fusun accuses Ariza of liking the criminal world which is why he no longer cares what happens with the case.  She informs him that she promised his mother that she would get justice for Nihan and she will do whatever it takes.

Later that day, the consortium partners meet with Fuat to discuss the Sabri situation.  They’re not happy that Fuat and Burak took matters into their hands without discussing it with the partners first.  They request Fuat ask Hasmet forgiveness for kidnapping Sabri who never confessed to the accusations.  Burak interrupts their meeting and tells the partners that he has already told Fuat that he will ask Hasmet for his forgiveness and will accept whatever punishment he deems appropriate.

Ariza visits Hasmet and Sabri at the hospital later that evening.  Hasmet thanks Ariza for what he did for Sabri.  Ariza tells him he was happy to help and asks Hasmet to remove the guards he’s placed at his home and café.  Hasmet tells him he was just trying to show his gratitude and his friendship for all he’s done but Ariza tells him that having guards around makes him look like he’s part of his world.  Hasmet understands and has the guards removed.  As Ariza is leaving, Muzaffer meets with him and warns him about Hasmet.  He tells him that Hasmet is and always will be a criminal and may not help him when the time comes.

The following day, Burak arrives at Hasmet’s home to seek forgiveness however Halide informs him that he’s not home.  As he tries to speak with Halide, he receives a call from Yashar who informs him that Hasmet is with Ariza at the café.  He wants to know if they should continue to wait until Hasmet leaves to kill Ariza.  Burak becomes enraged that Hasmet is meeting with Ariza so he orders Yashar to kill both Hasmet and Ariza even though Fuat told him that Hasmet should not be touched.

Hasmet visits Ariza at the Taxi Café.  He’s trying to find out who he really is and why he’s all of a sudden the Ersoylu’s enemy.  Ariza informs Hasmet that the Ersoylu’s took his life, so he plans on taking everything from them.  Hasmet understands Ariza and tells him that he reminds him of himself when he was younger.  He tells him that he also got involved in the crime world to get justice but instead got sucked into the life and became one of them.  Ariza tells him that there’s no turning back for him.  As Hasmet is about to leave, Yashar and his men begin shooting at them.  Ariza, Hasan, and the guards are able to protect themselves causing Yashar to back down and flee from the scene.  Once the bullets stop, they realize that Ariza suffered a gunshot wound and is taken to the hospital.

Hasmet and Ariza arrive at the hospital to a waiting Sabri and Halide.  Halide becomes worried when she realizes Ariza was one of the men who was shot.  Hasmet quietly observes how Halide cares for Ariza but doesn’t say anything.  Halide checks Ariza and determines it’s just a flesh wound and nothing major.  Ariza tells her she doesn’t have to worry about her dad because he was able to protect him but she tells him that she isn’t just worried about him which pleases Ariza.  Outside in the waiting room, Ariza’s mother finds out Halide is Hasmet’s daughter.  She tells them both that her heart breaks knowing that fate has allowed Ariza to become involved with Hasmet’s world.  She demands they both stay out of Ariza’s life which devastates Halide.

Fuat learns of the incident and demands to know if Burak ordered Yashar to kill Hasmet along with Ariza.  Burak lies and tells him that he hasn’t heard from Yashar and that he acted on his own.  Fuat doesn’t believe him but tells him to find Yashar and kill him before anyone else does.

Hasmet has asked to meet with Fuat however the consortium has decided to act as mediators to try to calm down the situation between them.  The partners inform Hasmet that they’re all looking for Yashar to find out if he was given orders to kill him.  Hasmet asks them what will happen if he finds out the Ersoylu’s are responsible for the attempt on his life.  The partners tell him that the betrayal was not only aimed at him but at the entire consortium.  Fuat tells them that if it is determined that one of his sons ordered the hit, then he will personally take care of it.

Muzaffer informs Ariza where to locate Yashar.  When he arrives at the location, he points a gun at Yashar but also finds Hasmet with him.

I really liked this episode because it’s starting to showcase the relationship between Ariza and Halide more.  My favorite scene is when they’re texting each other which turns a little flirty.  Their smiles totally give away the fact that they are seriously liking each other more than just friends.  Can’t wait for more next week! 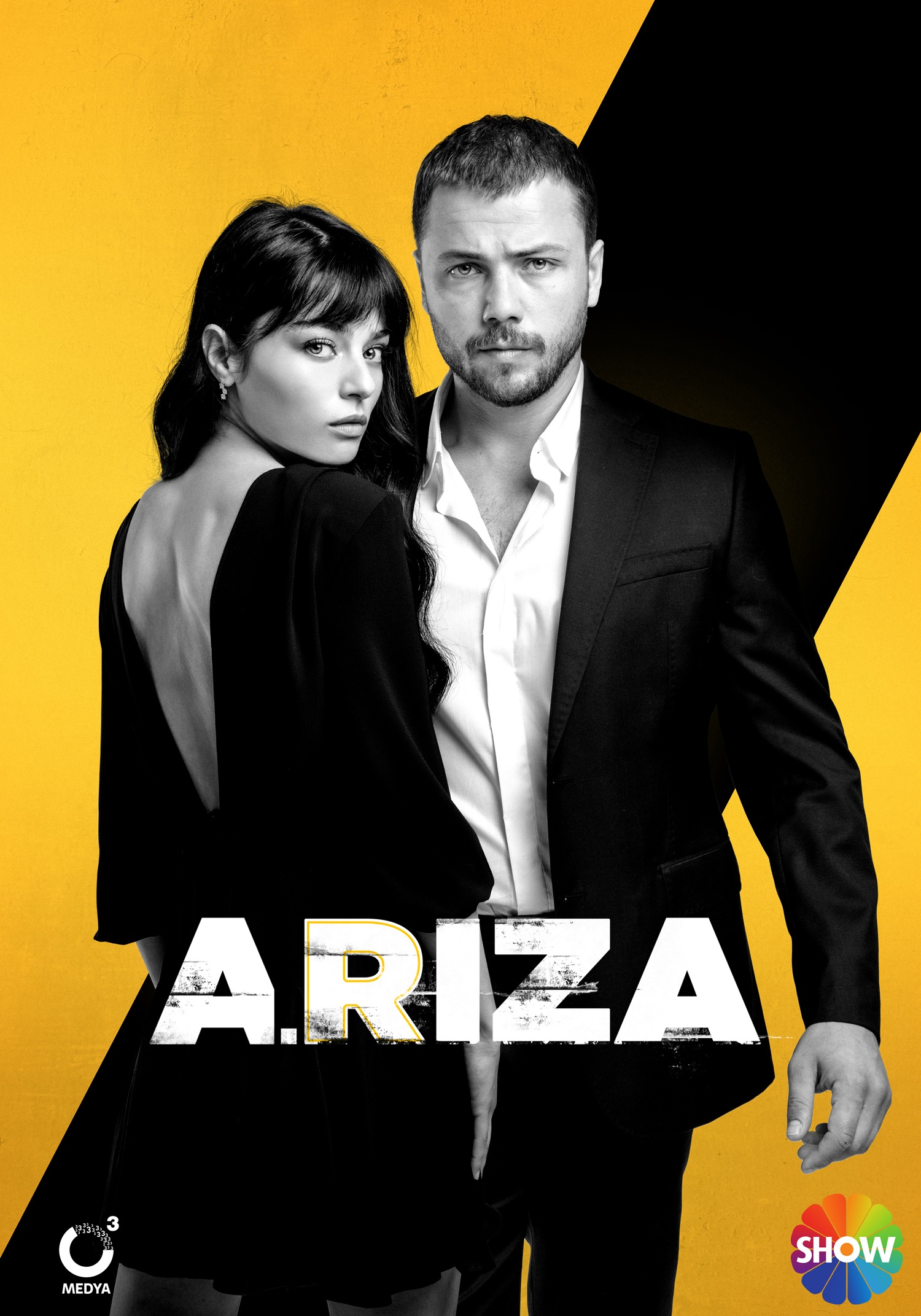