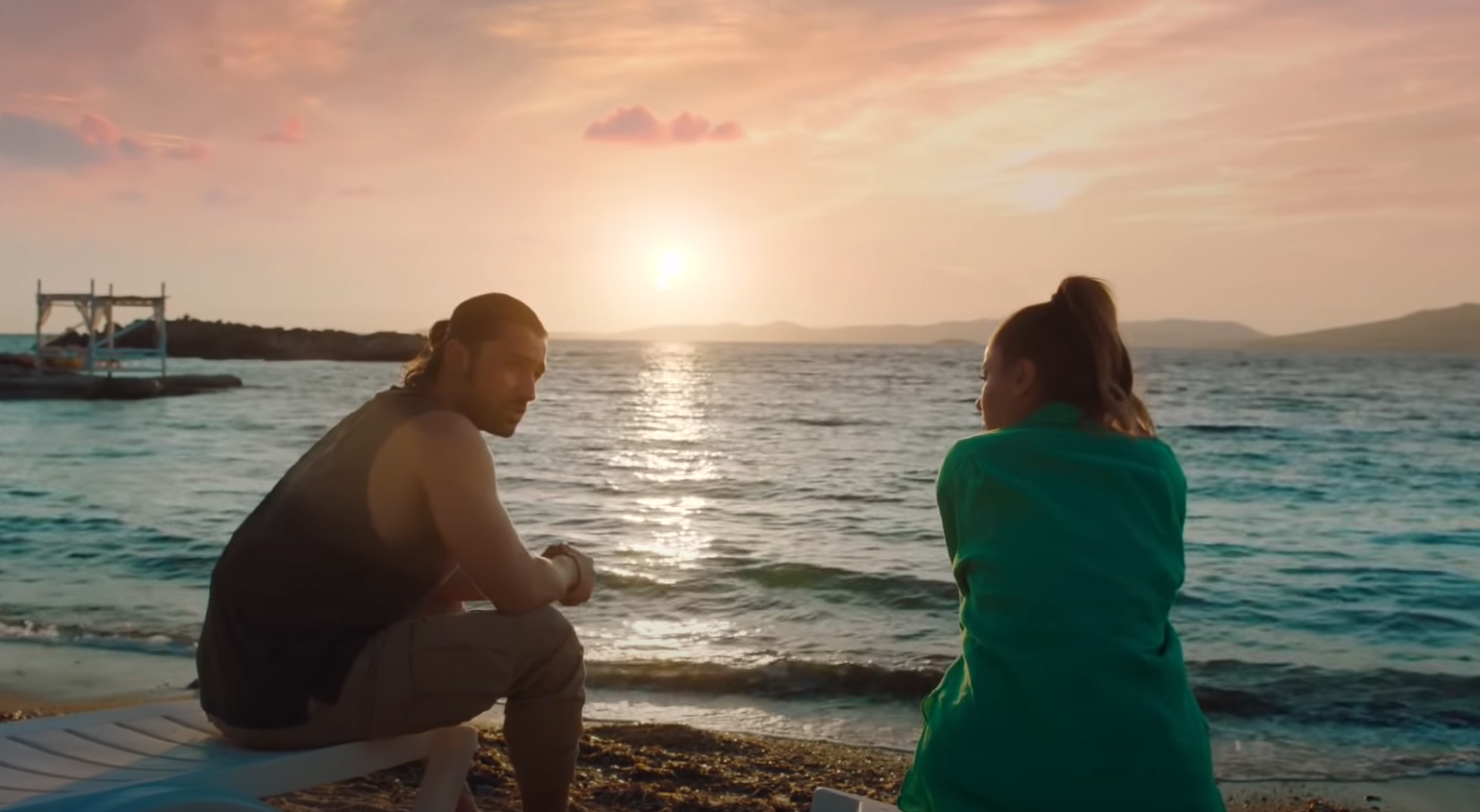 After Hakan threatens to hurt Haziran, Poyraz rushes to help her.  When he sees that Hakan has a broken bottle to her neck, Poyraz pretends to argue with Haziran to distract Hakan.  As soon as she gets the opportunity to shove him, she does but not before he cuts her with the bottle.  Poyraz is injured as well when he struggles with Hakan but ultimately floors him with a punch.  After the police arrive to take Hakan, Haziran and Poyraz are taken to the hospital to treat their cuts.  Both of their families are notified, and they all rush to check on them.  Once there, the families begin to feud after Ms. Aliye blames Haziran for Poyraz’s injuries.

On their way home, Nehir asks Haziran to forgive her for how she treated her causing them to make up.  Later, Biricik sneaks into her house to let her know that she has successfully convinced Alper to give her a chance now that he knows how she feels.  Haziran is happy but doesn’t think the stubborn Poyraz will do the same anytime soon.  As they chat, Poyraz stops by her house with the excuse of reminding her to take her medicine and sees Biricik as she tries to hide.  He tells her that he never believed that she would turn her back on Haziran but assures her that he won’t tell anyone.  Before he leaves, Haziran thanks him for saving her but Poyraz tells her it didn’t change their situation adding that he would have done the same for anyone else.

The next day, Nehir informs Haziran that someone has rented their most expensive suite for two months but is asking to look at the room before they arrive, so Haziran asks Poyraz to take photos.  While taking the pictures, Haziran asks him to forgive her, telling him that their friendship isn’t ruined, they just encountered a storm, and asks him if they can start renewing their friendship.  Poyraz uses a vase from the suite as a symbol of their relationship and throws it on the floor shattering it.  He tells her that the vase can never return to its original form just like his trust in her.

Later, Haziran and Idil are both given surprising news from their parents – they have decided to get married in two days.  Their announcement doesn’t sit well with either girl as they both still refuse to accept their marriage.  Haziran accuses Zeynep of marrying the mayor for his money and power, but she denies it saying that he loves her very much.  After their parents leave, Idil and Haziran decide to put their differences aside to work together so the wedding doesn’t happen.

While Zeynep and Mayor Latif are enjoying dinner, Selma interrupts their meal to remind Zeynep that she doesn’t have a maid and needs to clean up after herself.  The sisters get into an argument in the middle of the restaurant that Görkem eventually interrupts.  He tells them that the true reason behind their arguments is from Zeynep stealing Selma’s designs years ago, so he proposes a contest to decide who is the true designer.  After they agree, Zeynep receives a call from Haziran who informs her that she has decided to allow them to have their wedding at her hotel.  Zeynep is surprised that she changed her decision, so Haziran explains that she knows she will not go through the wedding and run away at the last minute because that’s who she is.  She reminds her mother that she was not made to live on a small island, so Zeynep tells her she too is not accustomed to island life.  Haziran tells her she has changed since arriving on the island claiming that she fell in love with the island while looking at Poyraz.

Haziran joins Poyraz afterward who tells her that he overheard her conversation about how terrible it is to live on the island.  Surprised, Haziran clarifies that she was just repeating what her mom used to say in the past about living there, but Poyraz tells her that he knows she has the same thoughts.

The following day, Haziran attempts to make her mom change her decision about getting married by returning her wedding gown that was shipped to the hotel.  When Zeynep discovers her dress is missing, it doesn’t give the outcome that Haziran expected which surprises her.  Later, as Haziran sits by the shore contemplating if her mom is truly getting married for love, Poyraz finds her.  Haziran tells him that even though her mom left Mayor Latif years ago, he forgave her, but Poyraz points out that he was probably mad at her for a long time.  Haziran responds that the most important thing is that he ultimately forgave her, clearly referring to their situation.  She tells him that they found each other after so many years but there are people who lose their true love because of forgiveness.  Poyraz responds that love doesn’t always tolerate mistakes.

Once Poyraz gets home, he finds Idil dressed up waiting for him to have dinner together, however it gets interrupted after Biricik calls Poyraz to let him know that Alper fell and is bleeding.  As Poyraz rushes to his car, Haziran sees him and follows him.  After they arrive at Alper’s restaurant, they find Biricik who confesses that she lied so that he would realize that he still cares for his friend even though he’s mad at him.  After the girls leave them alone, Alper promises that he will never hide anything from him again.  Poyraz ultimately forgives him.  Biricik tells Haziran that there is hope for her if he forgave his best friend, however, Haziran tells her sadly that friendship tolerates mistakes, love doesn’t.  After making up, Alper gently advises Poyraz that he’s been treating Haziran unfairly.

The next day, Haziran has a gift for Poyraz.  She gives him the vase he broke that she has glued back together.  She explains that the Japanese repair broken things with gold or silver to protect the story associated with the item knowing that it will never be exactly the same as before.  Haziran uses the vase as a symbol for her mistake towards him and his anger towards her.  Lastly, she tells him that she’s not asking him to forget what happened, she just wants him to give them a chance.

Later, Poyraz confesses to Alper that he’s thinking of forgiving Haziran after learning that his grandmother tried to get her evicted from her house.  He knows that if she leaves, he’s going to feel empty which scares him.  Alper reminds him that everyone has a limit until they stop trying and suggests he talk to Haziran before she listens to him and decides to leave.  At the same time, Haziran finds a letter stuck in the book she took from Ms. Elise’s house earlier that day when she and Poyraz were rummaging through her house to buy items for the hotel.  When Poyraz arrives, she tells him that Ms. Elise was once engaged but never got married because she thought her fiancé was cheating on her.  The letter she found is from her fiancé explaining that it wasn’t true, but she never opened the letter to discover that she was mistaken about him.  Ultimately, Ms. Elise died alone because of her pride making Haziran think about her current situation with Poyraz.

The following day is Zeynep and Mayor Latif’s wedding.  Although Haziran has changed her mind about their marriage, Idil is still against it and decides to lock the judge in a hotel room to prevent him from performing the ceremony.  As the evening goes on, everyone begins to worry about the judge not arriving.  Idil tells Haziran what she did prompting Haziran to find the judge so the ceremony can begin.

During the reception, Poyraz is ready to talk to Haziran but gets interrupted by his grandmother.  He asks her to let him decide what he’s going to do with Haziran, but she tells him that her great love is arriving soon to take her back to Istanbul.  Once Poyraz returns to the reception, he sees Haziran hugging someone who turns out to be Batu, the man Haziran dated in Istanbul, who Zeynep invited without Haziran’s knowledge.

Ms. Aliye is such a vengeful person.  I can’t believe she hit poor Sadik for not following her orders after she discovers that he’s been helping Haziran and Zeynep.  She even threatens Selma who accuses her of behaving worse than Zeynep.  I love that Selma refuses to listen to her, but Ms. Aliye reminds her that there will come a day when she will be left on the island to deal with her choices.  Yikes.

Görkem was the show stealer once again in this episode.  His scenes with both Sadik and Melissa were extremely funny but not over the top.  He has bonded with Sadik from the mutual love of gossip and they’re not ashamed of it.  Görkem was also hilarious as he continues with his plan to get revenge on Biricik for turning her back on Haziran.  I love how he’s trying to teach Melissa how to walk, talk and act like a feminine girl. He definitely has his hands full.

I loved that we got a glimpse of the close relationship between Alper and Poyraz.  Their friendship seems so authentic and genuine.  I felt Poyraz was being unfair to Alper for not giving him a chance to explain his side of the story.  I loved that Poyraz admitted to his friend that for once in his life, he’s scared of losing Haziran and Alper was right in telling him that everyone has a limit before they give up.  I really hope Poyraz listens to his lifelong friend before it’s too late.

Overall, I thought it was a good episode however I’m not sure about the designer contest between Zeynep and Selma.  I felt like it was unnecessary since it didn’t really do much for the story.  By the way, the dress that Zeynep designed was pretty except for the cans attached to the hem.  I personally thought it ruined the dress.  Selma’s design was better, but I think they should have given Melissa a new hairstyle to match the beautiful dress.  Instead of the contest, I wish we could have seen more Görkem being silly with Melissa or extend the conversation between Alper and Poyraz.

I hope Batu's arrival doesn’t create silly jealous scenes between Poyraz and Haziran.  I don’t like it when grown people begin to act like jealous teenagers instead of talking things out.  Perhaps Batu’s presence will make Poyraz realize that he can lose Haziran if he continues to be unfair to her.

I thought the use of a fragile vase to represent Haziran and Poyraz’s relationship was ideal.  I love how it was shattered like Poyraz’s trust in Haziran but was put back together even though it wasn’t exactly how it was in the beginning.  Relationships are never the same after going through a break-up.  Oftentimes it’s a better relationship because it gives the couple a chance to voice their concerns that ends up improving the original relationship making it better.  As Alper said, everyone has a limit so I can’t wait for Poyraz to forgive Harizan or at least look past her mistake.