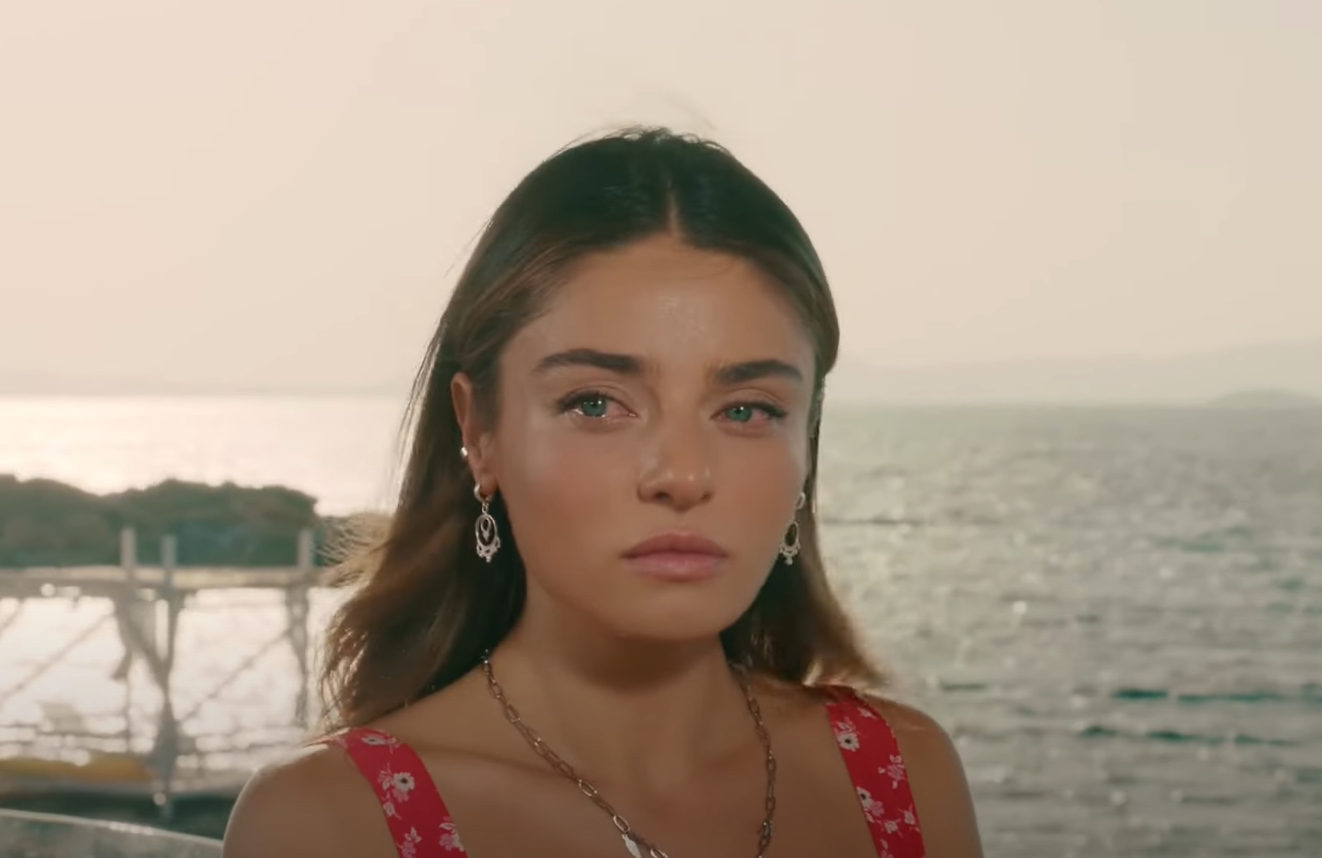 The episode begins with Haziran refusing to sell her shares of the hotel to Poyraz and also refuses to accept money from the hotel’s earnings without her working for it.  Her reason for staying is so she can forgive herself for the mistake she made even if Poyraz doesn’t.  After hearing that she’s staying, Poyraz promises to do everything he can to run her off the island.

When Idil finds out Haziran is staying, she immediately reports to Mrs. Aliye who comes up with a plan that will make her leave.  She speaks with all the island vendors and asks them to not sell anything to Haziran which they all agree.

At the hotel, Poyraz starts making problems for Haziran beginning with giving their chef the day off, leaving them with no one to cook dinner for their guests.  He challenges Haziran to make it herself knowing that she’s not skilled in the kitchen, but she willingly accepts.  As Haziran goes to town to purchase items, she encounters a lot of unfriendly people who refuse to sell her anything.  She soon realizes that the islanders have all chosen Poyraz’s side.  One thing she wasn’t expecting was Biricik’s betrayal.  When she sees her at Melissa’s bakery, Biricik informs her that she picked the islander’s side because she doesn’t support all her lies.  Shocked, Haziran and Gorkem leave and run into Selma and Nehir, who also ignore them.  However, Haziran gets a nice surprise from her aunt.  Although she doesn’t speak to her, Selma gives Haziran her groceries because she refuses to let her go hungry knowing what the islanders are doing to her.

Once Selma gets home, she informs Zeynep what her daughter is dealing with because of Mrs. Aliye.  Zeynep rushes to her house and begins to argue with her about Haziran and Poyraz.  When Mrs. Aliye refuses to talk to the islanders, Zeynep attempts to dig out the plants that her mother planted.  Haziran and Poyraz arrive just in time to break up the argument.  Haziran scolds her mother for making Mrs. Aliye upset in her condition even though she’s been nothing but rude to her.  Before they leave, Mrs. Aliye vows to never allow Haziran to be with Poyraz.

Later that evening, Haziran asks Mert and Burak to help her put some things away in the freezer, but they ignore her.  Frustrated, she does it herself, and while in the freezer, someone shuts the broken door locking Haziran inside.  After realizing that the door is locked, she calls out frantically for help but unfortunately, no one can hear her.  Once everyone leaves the hotel and Mert falls asleep, Haziran continues to call out for help with no luck.  When Poyraz arrives home and notices that Haziran isn’t home yet, he stays outside waiting for Haziran.  Worried, he goes back to the hotel and after seeing the freezer door locked, he opens it and finds Haziran inside.  Poyraz calls the ambulance to get her checked out.  Later, Poyraz watches over Haziran after she develops a fever and begins to talk in her sleep.  She appears to be having a nightmare about her father because she says that her father didn’t kill himself.  After comforting her, Poyraz drops her penlight and discovers the writing on her “Tree of Lies”.

The following morning, Haziran thanks Poyraz for taking care of her, but he denies doing anything.  He tells her he only took her home and mentions discovering her tree drawing.  She explains the writings are lies she intends on fixing, so Poyraz tells her the only way she can do that is by leaving.  As Haziran is on her way to the hotel, Biricik surprises her and reveals that she didn’t mean all the things she said at the bakery.  She explains that she’s pretending to hate her so she can be a spy among the islanders and be able to know if they’re planning something against her.  Haziran asks her to not get involved, but Biricik insists on helping her friend.

Haziran’s new challenge at the hotel is manual labor after discovering that their cleaning lady is off thanks to Poyraz.  He challenges her to do the cleaning herself thinking that she won’t do it, but she takes care of the cleaning on her own.

Hakan finally makes an appearance in town.  He attempts to make peace with Mrs. Aliya, but she refuses to accept his excuses and tells him to leave the island to avoid additional confrontations with Poyraz.  Melissa sees Hakan and informs Poyraz who rushes to find him and locates him on the harbor.  They get into another confrontation as Poyraz demands that he leave the island, but Hakan refuses.  He says that everyone on the island never truly loved him and only saw him as an orphan which he resented.  Poyraz tells him it’s not true and says he realized he’s an ungrateful person and throws him into the water.  Before that happens, Hakan drops another bomb on Poyraz – he informs him that Alper also knew about Haziran but didn’t tell him.

Idil finds Haziran to ask her whose idea it was for Zeynep to marry her father.  She denies knowing anything about it but goes to speak with her mother.  Zeynep confirms her pending marriage with the mayor claiming that she never thought she would meet anyone after her father died but Haziran doesn’t believe her.  She knows she’s marrying him for his money and power.  Haziran pleads with her to cancel her wedding claiming that the islanders will hate her more if she goes through with it.  Zeynep ignores her pleas disappointing Haziran who walks away without congratulating her.

Later that evening, Biricik throws a party in hopes of reuniting Haziran and Poyraz but it doesn’t go as planned.  The drama begins as soon as Poyraz arrives.  After he says a toast to acknowledge Haziran and Hakan’s betrayal, he also calls out Alper.  He tells everyone that Hakan informed him that Alper knew about Haziran but didn’t tell him.  Alper tries to explain, but Poyraz refuses to hear him out.  Worried, Idil leaves immediately and calls Hakan to ask if he told Poyraz about her attempt to shut down the hotel by planting roaches.  She begins to cry knowing that she’s his weakness, so Hakan tells her he didn’t tell Poyraz about what she did.

The following day, Idil leaves home in protest of her father’s plans to get married to Zeynep.  She refuses to allow another woman into her house, especially Haziran’s mother, so she moves in with Poyraz.  Of course, Haziran is not too happy knowing that she’ll be with Poyraz 24/7.  At the hotel, Alper makes an attempt to speak with Poyraz and explain that he found out about Haziran the night before but Poyraz still refuses to listen to him.

Later, Poyraz finds Haziran to give her the photos that were taken of her while she was crying in the photo booth.  She explains that she could no longer take the weight of the lies after they started to get close.  When Poyraz asks her if she didn’t have any secrets, would she have answered his question about having feelings for him differently, she says yes.  Before Haziran can explain what the crossed-out message on her Tree of Lies means, Idil interrupts them.  She asks Haziran if she told Poyraz about her mother finding their third partner.  Poyraz asks why, so Idil answers for Haziran and says that she probably plans on buying their shares so she can own the majority of the hotel and possibly fire him.  Haziran denies it and explains that her mom did it without her knowing so she shouldn’t be blamed for what she did.  Poyraz leaves abruptly but not before telling her that she is no longer special to him.  After Haziran is alone at the hotel, Hakan surprises her.  He blames her for all his problems and demands that she pay for what she caused.  Haziran attempts to run away, but Hakan grabs her and threatens to hurt her.

Hakan’s reason for what he did to Poyraz was weak.  How can he justify hating Poyraz just because the islanders didn’t love him as much as they loved Poyraz?  I believe he was just jealous of the attention and love Poyraz got while he was probably too blind to see that he received the same attention.  I also didn’t like Hakan blaming Haziran for the islanders turning their backs to him.  Haziran was right to tell him that he’s the only person responsible for his actions.

I disliked Zeynep for continuing to be selfish and disappointing Haziran again.  She seems to only think about herself and not caring that she will make her daughter’s life miserable if she goes through with her marriage.  It was so sad when Haziran pleaded with her while her mom is only thinking of her future.  Not only is she going to hurt Haziran, but she will also hurt the mayor who she doesn’t even love.

Selma is so sweet and nothing like her sister.  I love that even though she’s upset at Haziran, she couldn’t let her go without food.

I also loved Görkem for always being Haziran’s support.  I love that he’s getting revenge on Biricik by helping Melissa get with Alper.  I hope Haziran lets him know that Biricik is only pretending to be mad at her before he does something serious.  On another note, I feel a make-over is coming up for Melissa so she can get Alper’s attention.

I really liked the new show intro.  Not sure why they haven’t shown it until episode 8, but I loved it and I hope it continues.

This episode had a few unnecessary scenes in my opinion.  First, what was the point of putting Haziran in an ambulance when the next scene was her at home?  I thought we were going to see her in the hospital while being observed after being locked in the freezer.  Did the ambulance just take her home?  Why didn’t Poyraz take her home after the EMTs checked her out?  Another scene that didn’t make sense was Idil getting hit by Ateş.  Was it just to interrupt Haziran and Poyraz?  It just seemed unnecessary and out of context.  Haziran milking a cow was so random.  I'm sure they added it for a comedic reason but another unnecessary scene.

I don’t like how Poyraz is being a hypocrite.  He does nothing but be mean and rude to Haziran but yet takes care of her himself after saving her from the freezer.  He also tells the hotel staff to look out for her, but then he ignores her.  He can be mad at Haziran, but if he still cares for her then he should let her explain herself and listen to what she says before it's too late.

Last, is Ms. Aliye really loved that much to get the islanders to refuse Haziran service?  The way people were lining up to speak to her was like she was the queen of the island.  I know the islanders all take care of each other but that was a little extreme.