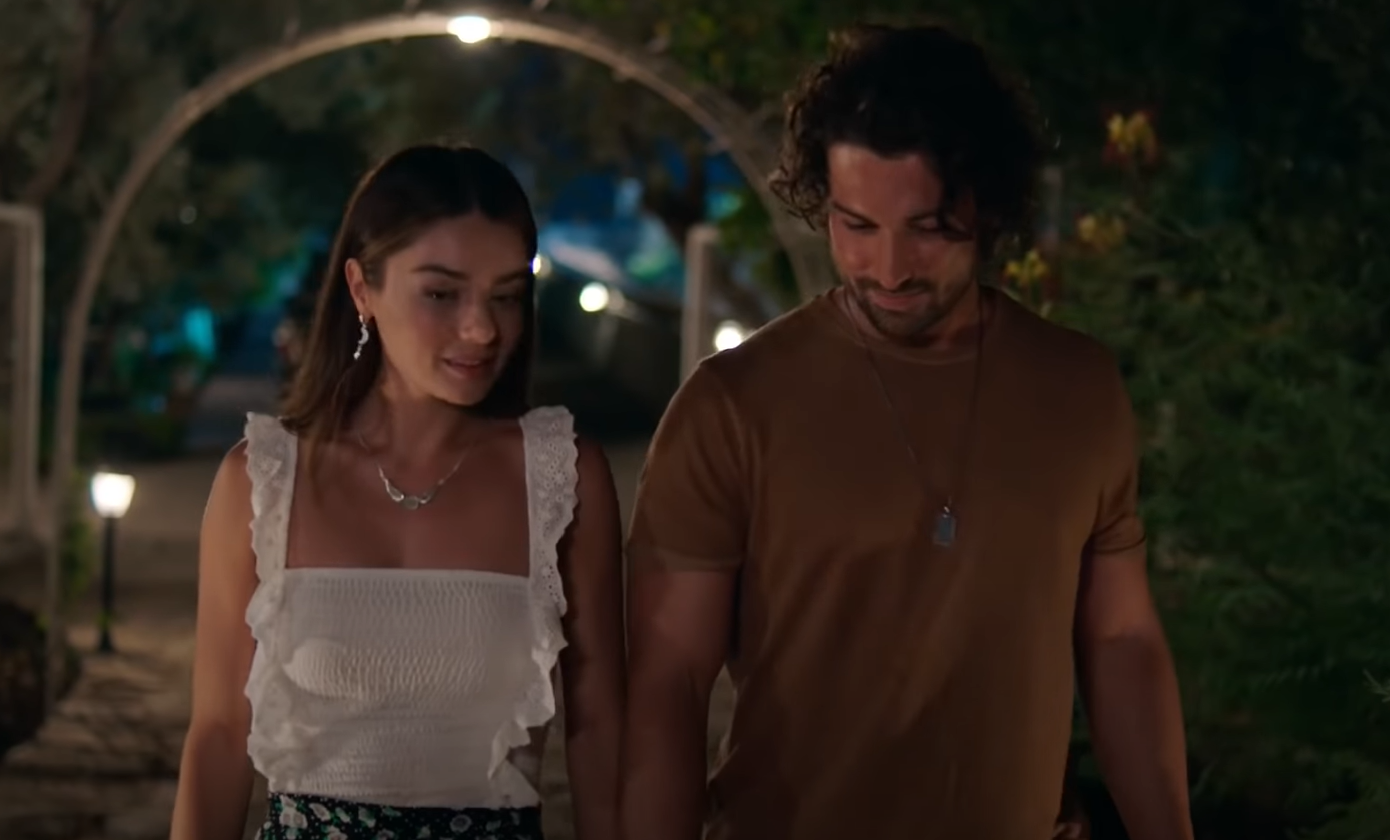 As Haziran confesses her secret to Poyraz’s grandmother, she regains consciousness!  Haziran is not able to ask if she heard her because at that moment, Poyraz returns and discovers his grandmother is awake and rushes her to the hospital.  Once Haziran arrives at the hospital, she realizes that his grandmother hasn’t said anything to him, so she hopes that she didn’t hear her confession.

The following morning, Haziran visits Poyraz in hopes of speaking with his grandmother and finds Idil already there.  Haziran makes a neighborly gesture and takes pancakes but both ladies refuse to eat them because they’re burned, however, Poyraz willingly eats one so she doesn’t feel bad.  After Idil leaves, the grandmother requests to speak with Haziran to warn her that she will be watching her closely but doesn’t confirm if she has been listening to her while in a coma.

After Poyraz and Haziran leave for the hotel, he attempts to take her back to the lavender field so they can finish their conversation from the night before, but Haziran makes excuses so they return to the hotel instead.  She realized that Poyraz has feelings for her which will make it more difficult when he learns the truth.  Once at the hotel, they encounter a rude customer that checks in so Haziran reminds them to treat him nicely even though he doesn’t deserve it.  Poyraz runs into Zeynep at the hotel who informs him that Haziran is a city girl who doesn’t like hotels like the one they renovated so he tells her that she doesn’t really know her.  Later, Zeynep tells Haziran that she spoke with Poyraz and told him that she will soon get bored and leave.  Haziran gets upset and finds Poyraz to explain that her mom was wrong and loves the island life, however, Poyraz tells her he already knows that as they share a tender moment in the photo booth he set up for the hotel.  As they take photos, they have another near-kiss moment that Haziran flees from.

Later, the same rude customer causes another scene as he yells at Nahir.  Poyraz overhears the conversation and attempts to help but the customer keeps twisting his words ultimately claiming to be thrown out.  During the entire confrontation, Hakan is secretly recording the scene.  Afterward, the rude customer meets with Hakan who pays him for creating the scene at the hotel.  It’s obvious he was playing the part for Hakan who plans to post the scene on social media in another attempt to shut down the hotel.

As Haziran is going home, she runs into Poyraz who invites her to go camping with him.  Initially, she refuses but when she discovers that Idil is also going, she agrees.  The following morning, Idil and Melisa are not happy that Haziran is joining them but Poyraz defends her.  When he attempts to talk to Haziran about his feelings for her, she dodges the conversation again.  Later, Hakan suggests they play Truth or Dare.  When it’s Poyraz’s turn, Hakan dares him to kiss one of the girls at the campfire.  Of course, he chooses Haziran.  As they are about to kiss, Idil makes a scene to interrupt their kiss.

This leads to everyone yelling at each other until Haziran yells for them to stop.  Idil takes the opportunity to accuse Haziran of ruining their trip, but Poyraz defends her and demands that she stop blaming her.

The following morning, they wake up to the news that the rude customer has posted a video claiming that Poyraz hurt him while staying at the hotel causing several reservation cancellations.  Poyraz tells Haziran that he knows the people behind it are from the company that is trying to take his land.  Haziran calls Hakan accusing him of causing the issue and asks him how he can do that to his friend, but he responds that he knows she loves Poyraz so if she tells him the truth, she will be the one who gets hurt the most.

Meanwhile, Idil is trying to get his aunt on her side by telling her that Poyraz yelled at her during the camping trip because of Haziran.  Since the grandmother knows the truth, she tells her that she will do whatever it takes so Poyraz doesn’t stay with Haziran.  At that moment, Poyraz calls her to ask if she can find out if the rude customer was treated at the hospital that he claims he got from Poyraz.  Idil agrees and discovers that the man never went to a hospital.  As Poyraz tells Haziran that he can’t believe people who have known him for years are believing the lies while she has never doubted him.  Their moment is interrupted by a call from Gorkem who tells her the rude customer is still on the island at a nearby hotel.  They encounter him attempting to leave the hotel.  Poyraz confronts him and gets him to confess that he was paid to fake the injuries and post the video online.  Poyraz demands to know who paid him but he doesn’t say but he agrees to post a retraction and apology.

Later that evening, Haziran confesses to Biricik that she loves Poyraz and can’t continue to avoid him.  She’s determined on letting their relationship move to the next level and plans on dealing with the situation when the secret comes out.  She believes if Poyraz truly loves her, then he will forgive her.  After Biricik leaves, Poyraz stops by her house to talk.  He tells her the story of his mother abandoning him and his father when he was little.  She promised him that she would return but never did which devastated his father, who later was killed at sea after going sailing during a storm.  Poyraz tells Haziran that she’s special to him which is why he told her the story.

As they share a tender moment, Poyraz tells Haziran he has a small gift for her, so while he leaves to get it his grandmother talks to Haziran.  She tells her that she heard everything she said to her while she was in a coma and although she may forgive her, Poyraz never will.  She points out that his mother attempted to get his forgiveness several times throughout the years, but he never did.  Devastated, Haziran leaves and tries to hide at the hotel, but Poyraz finds her.  He demands to know what caused her to leave and instead of telling him what his grandmother said, she lies and tells him that she left because she got scared of how close they were becoming.  She claims to want to keep their relationship professional but Poyraz doesn’t believe her and kisses her!

Meanwhile, Alper and Biricik argue after they witnessed the scene between Haziran and Poyraz.  Alper is upset at Haziran who he believes was only playing with him.  Biricik defends her friend and tells Alper that Haziran has her reasons for stepping away from a relationship.  While defending Haziran, she lets it slip that her reasons include trying to correct the fact that she was responsible for his bank problems.

I loved Poyraz in this episode for defending Haziran to anyone who tried to treat her badly.  He was so adorable for eating one of her burned pancakes!  Watching this Poyraz, who finally realized he has feelings for Haziran, was a joy to watch especially when he tried to declare his feelings for her even though she kept avoiding him.

I also loved how Haziran believed in Poyraz and supported him after the fake video was released.  She never doubted him while his fellow islanders truly believed that he would hurt a customer.  I especially loved how they worked together to get the rude customer to confess after they confronted him.

I like Melisa but I thought she was unfair in this episode after she refused to give Alper permission to date Biricik.  I understand she’s their childhood friend but is her refusal because she thinks Biricik will hurt Alper or because she secretly wants him for herself?  It’s unclear what her true intentions are.  If she really likes him, then she needs to step up and tell him or she will end up losing him.

I thought this episode was the best one so far.  It had romance and drama all rolled up in a fantastic episode.  I’m wondering if Poyraz’s grandmother was telling the truth about his mother returning for him or if she was just saying that to scare off Haziran.  I think the new developments were interesting and needed to further the storyline.  Several questions have come up.  Why did the grandmother tell Haziran that her mother needs to leave the island and kept calling her cruel and a thief?  Could it perhaps have to do with Poyraz’s father?  I can’t wait to find out in the coming episodes.

And last, I can’t believe Biricik blurted out Haziran’s secret!  What was she thinking?  Once Alper shares this information with Poyraz, the situation on the island will intensify for everyone.  I hope Haziran is ready to explain and Poyraz is willing to listen.