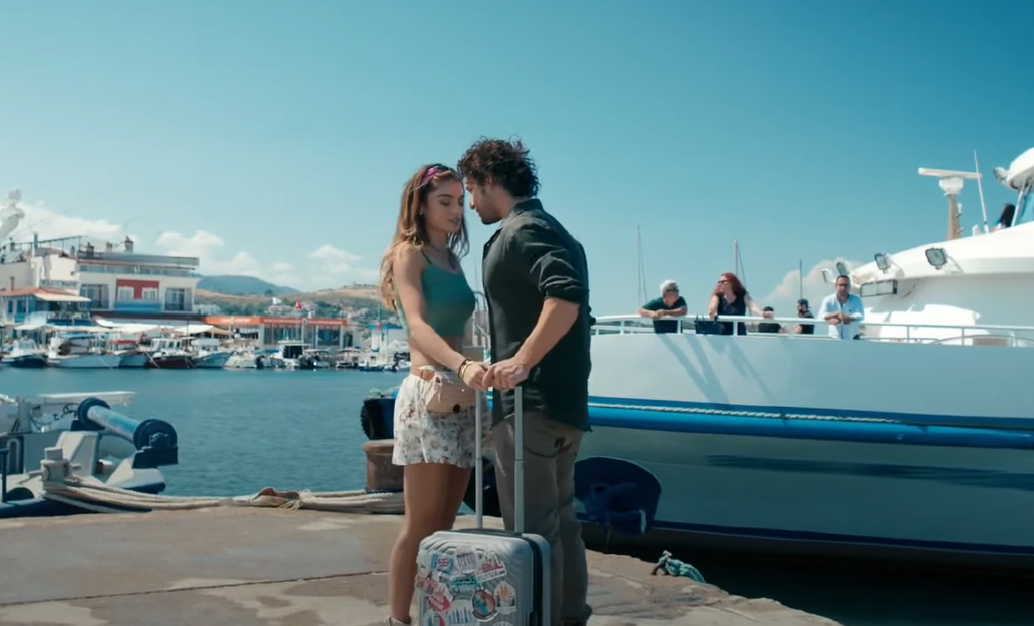 This week’s episode begins with Poyraz making it just in time to stop Haziran from leaving the island.  Neden?  Because he needs her to handle customer relations at the hotel.  Of course, Haziran agrees using the same excuse that she needs to stay because she doesn’t want Poyraz’s attitude to hurt the hotel’s image.  Meanwhile, Idil is busy distributing donuts to everyone in town to celebrate Haziran leaving.  Once she gets the news that Haziran didn’t leave, she explodes especially when she discovers that Poyraz stopped her.  To get revenge on Haziran, Idil decides to plant roaches right before the inspection, so they fail and don’t obtain the license to open.

While Haziran and Poyraz attend an impromptu party at her aunt’s house to celebrate Haziran not leaving, they receive a surprise visitor….Haziran’s mother, Zeynep.  Her arrival puts a damper on the celebration after she accuses Haziran and Görkem of lying to her.  Haziran attempts to explain, but Zeynep refuses to listen and demands that she leave with her immediately, however, the last ferry has already left for the day.  Haziran and her mother have a heated argument, so she leaves and Poyraz follows her after seeing how upset she was.  Zeynep leaves in search of a boarding house to stay the night in and is followed by Görkem begging her to forgive him while throwing Haziran under the bus blaming her for their lies.  Zeynep refuses to listen causing Görkem a great amount of sadness.  At the last minute, Zeynep decides to stay at her mother’s house instead, which is where her sister lives.  Unfortunately, Nehir has to witness the hostility between the ladies while putting her in an awkward position.

The following day, Haziran and Poyraz prepare for the inspection but encounter a sad Görkem.  He asks Haziran to take a picture of him to send to Zeynep so she can feel bad for him and get her forgiveness.  Haziran ignores his request and instead deals with the hotel’s pending inspection.  Idil and Hakan both appear at the hotel after Haziran and Poyraz complete their test inspection before the real one.  She takes that opportunity to plant the roaches in the kitchen, but Hakan catches her.  He threatens to tell Poyraz, but Idil convinces him to stay quiet, and eventually, he decides to help her.

Once the deed is done, they both leave quickly, but Haziran notices Idil dropping a box in the trash as she leaves which is where she was carrying the bugs.  As expected, the inspector sees the bugs in the kitchen and refuses to give them the green light to open leaving a confused Poyraz and Haziran.  They don’t understand how the bugs could have made it into the kitchen after Haziran checked everything.  An angry Poyraz leaves to speak with the mayor to see if he can help, while Haziran tells Görkem what happened.  She slowly realizes that it was Idil who set them up and confirms her suspicions when she finds the box that she dropped in the trash and sees that it contains the same bugs found in the kitchen.  Görkem convinces her to confront Idil. While Poyraz is asking the mayor for an expedited second inspection, Haziran visits Idil and accuses her of planting the bugs.

She denies everything of course.  Haziran reminds Idil that she will not be the only one affected by the hotel not opening, Poyraz will lose a lot more than her and asks her how she can hurt him like that.  Before they can finish their conversation, Haziran receives a call from the police station informing her that Görkem has been arrested so she leaves.  Idil rethinks her strategy and pleads with her father to expedite the second inspection so the hotel can open on time.  Her father agrees so Idil rushes to Poyraz’s house to celebrate the news that there will be a new inspection soon and finds Haziran is there as well.  Knowing that it’s all a show, Haziran becomes annoyed when Idil says that because of her, the hotel will open on time because she convinced her father to expedite the inspection.

The following day, Haziran agrees to meet with her mother and the reunion does not go well.  Zeynep is afraid that Haziran has started to love the island life which she does not support.  She believes that living on the small island equates to small dreams that will limit her life, which is why she left the island and never returned.  She attempts to convince Haziran of returning home with her so they can figure out another way to pay her debts, however, Haziran tells her that her actions are too late.  She explains that after her father died, Zeynep was too busy mourning her husband and didn’t notice or console her and instead sent her away to boarding school.  When Zeynep explains that she was the one who wanted to go after she secretly applied to the school, Haziran responds that she thought she didn’t want her around the house.  They both realize they were wrong, so Haziran asks her mom to go back to the city and advises her that she’ll return but not until after she has completed her work for the hotel.  Zeynep fears that Haziran will want to stay on the island so she tells her that she’s staying too so they can return together.

Later, Haziran asks Görkem to manage the hotel while she and Poyraz are away taking photos but finds him moping around and sad.  Fed up with his attitude, she splashes water on his face and demands that he get it together, and informs him that her mom has decided to stay on the island for a while longer.  She tells him if he doesn’t shape up, then her mom will never want to spend time with him again.  Görkem finally returns to his old self to win back Zeynep.

As they make their way to the location for the photos, Haziran and Poyraz encounter another obstacle, literally.  The road is blocked by a herd of sheep that refuses to move so Haziran attempts to scare them away but is unsuccessful.  While waiting, Haziran informs Poyraz that her mom has decided to stay on the island for fear that she will connect with the island and not want to leave.  Intrigued, he asks her if there is a possibility of her staying, and Haziran answers that even if she wanted to stay, the island won’t accept her.  Poyraz asks what if it was ready to accept her so Haziran tells him that she would need some sort of sign.  Slowly, the magical pull of their attraction draws them into a kiss, but Haziran breaks the intense moment to comment on the fact that the sheep have finally moved away so they can continue on their trip.

While taking photos, Haziran receives a call that the guitarist for Buray, who is scheduled to perform at the grand opening of the hotel, was taken to the hospital.  When they arrive, they’re told that he went into diabetic shock after eating too many cookies at Melisa’s bakery and needs to be admitted for observation which means that he will not be able to perform at the concert.  This leaves Haziran and Poyraz in another difficult situation since the concert has already sold out.  As Haziran stresses about finding a replacement guitarist, she receives a text from Poyraz to inform her that he solved the problem but doesn’t elaborate.

The following evening, it’s the grand opening of the hotel and the concert.  As Haziran and crew take care of last-minute details, she wonders who the replacement guitarist is after Poyraz informs her the replacement is from the island.  When the concert begins and Buray walks on stage, he’s accompanied by none other than Poyraz who surprises everyone, especially Haziran.

Later, while Haziran and Poyraz are chatting at his house, he receives a call from the hotel that requires him to leave so he asks Haziran to wait for him to return.  She decides to check in on his grandmother and ultimately confesses all her secrets to her.  Shockingly, the grandmother wakes up while Haziran says she regrets what she’s done.  At that moment, Poyraz overhears Haziran and asks what she regrets doing.

I loved Nehir for having the guts to put a stop to the constant bickering of her aunt and mother after enduring it day and night.  I especially loved that she made them go to their rooms after they begin arguing and fighting over who gets to sleep in their parent’s old bedroom.  She did the right thing!

Görkem was extra dramatic in this episode, and I loved every minute of it.  He was hilarious throughout with his overly sad behavior after Zeynep refused to speak with him.  I especially loved the scene where he threw himself at Zeynep at the beach only to be arrested.

I dislike that Haziran can’t tell Poyraz how Idil really is.  I find it curious that he can’t believe that she can do no wrong and doesn’t see how fake she is.  It’s obvious to everyone (except to Poyraz) that she is in love with him so I think it’s time that he sets her straight, so she doesn’t continue with her demented thoughts of them getting married.

I also dislike that we haven’t seen a lot of interaction between the other characters.  I want to see more of Melisa and Alper with Poyraz as well as more Biricik and Haziran.  I want to know more about their friendships especially if Melisa is really in love with Alper.

Ayça Ayşin Turan continues to amaze me with her beauty.  I feel like she’s in her element in this particular dizi because she seems very comfortable with the entire cast that shows in her chemistry with everyone.  I hope she's enjoying the amount of time they spend outside in the spectacular environment.  It’s evident that the warm weather agrees with her because she seems to glow more and more in each episode.  No words are needed about her incredible wardrobe that is the pure definition of summer.

I believe that the story needs more drama.  I continue to love this dizi, but the storylines are not evolving leaving us with the same questions from episode one.  What caused the feud between Zeynep and Selma? Why is Haziran scared of the ocean? Why does Hakan hate Poyraz?  I think it’s time that we at least start to see some kind of development from each of these storylines that will make the drama come alive and expand into other wonderful possibilities.  I am happy that Zeynep has finally learned that Haziran was not in Greece.  I’m also happy that we got to know them better and learn why their relationship is so strained.  I think the meeting between Haziran and Zeynep was good because it gave them the opportunity to open up and share feelings that they held onto for years.  I do hope that Zeynep begins to believe in Haziran soon.  I hate that she doesn’t have any faith in her even though it’s obvious that Haziran is not a spoiled girl, but a thoughtful and determined woman.

I think that Poyraz’s grandmother waking up was another step towards opening up more storylines, especially with the potential that she heard Haziran’s confession.  I think the grandmother will be the element that will break up the relationship between Haziran and Poyraz when/if she remembers the confession and tells Poyraz.