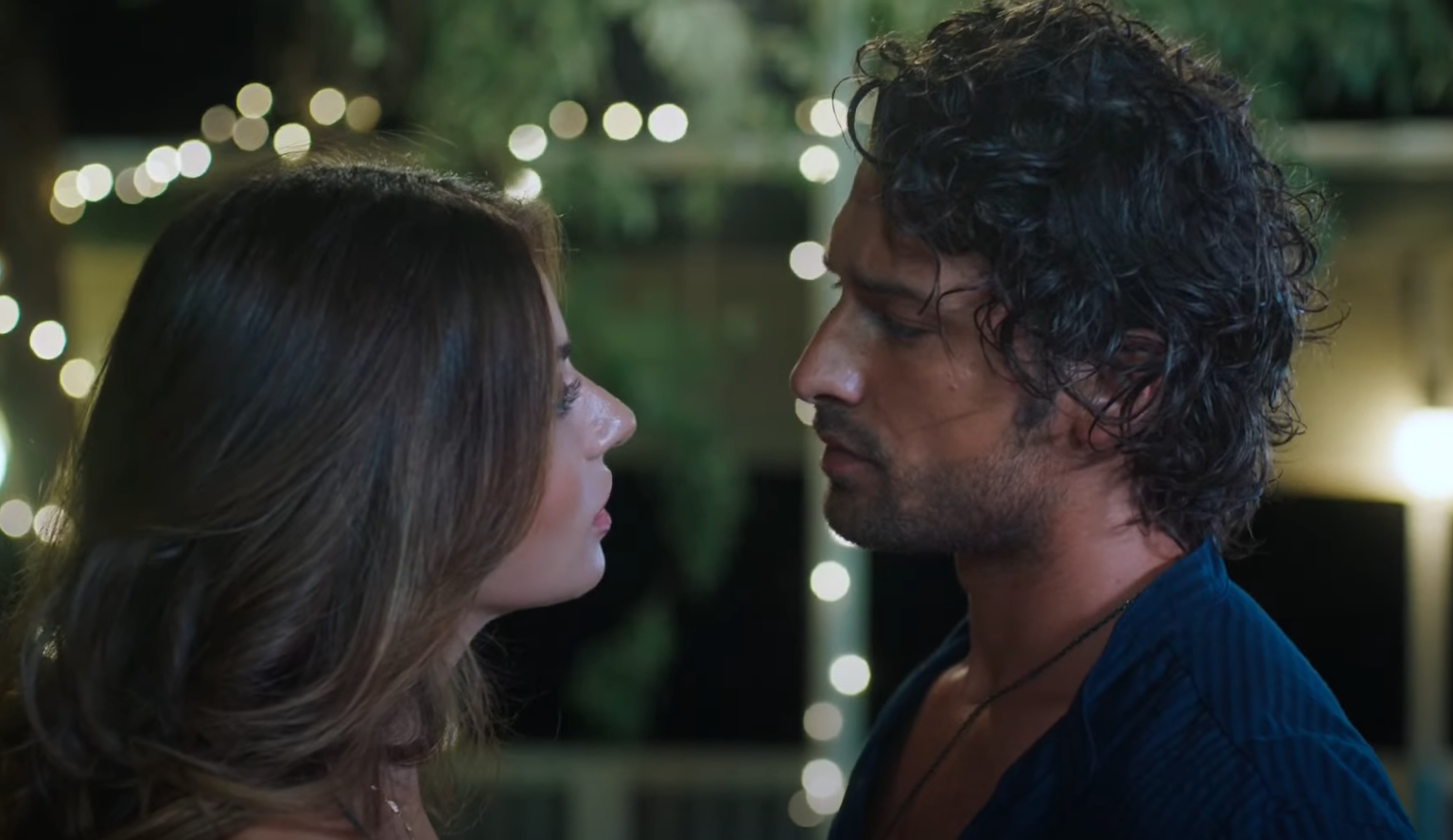 The episode begins with Idil witnessing Poyraz and Haziran sharing a tender moment as he comforts her after she finds out her mom put their house up for sale.  Idil leaves angry and runs into Hakan.  She takes that opportunity to try to make Haziran appear like a phony in front of Poyraz, so she accuses Hakan and Haziran of knowing each other before meeting on the island.  Hakan quickly responds to her accusation by telling Idil that she needs to stop thinking like an islander since not everyone in Istanbul knows each other.  Haziran quickly returns to the party where Poyraz finds her and apologizes for Idil’s allegations which makes her feel even more guilty because Poyraz doesn’t believe she would lie to him.  As she’s about to confess, her friend interrupts them asking her to dance causing Poyraz to leave the party.

Afterward, Haziran expresses her worries to Biricik about Idil who is intent on exposing her suspicions that she’s lying to Poyraz and says she would prefer to be anywhere else.  To help her, Biricik reaches out to Batu (Haziran’s ex-boyfriend) asking him to give Haziran a job.

The next day, as Poyraz and Haziran are on their way to try the food from a local chef in the hopes of hiring him for their hotel, they run into Hakan.  He continues the façade that they don’t know each other so he asks her for the phone number to their mutual friend.  Once she’s near him, he threatens Haziran to be nice to him for covering for them when Idil confronted them.

The island mayor, Idil’s father, arrives in town and after hearing her childish requests to shut down Haziran and Poyraz’s hotel, he rejects her telling her he has never abused his position and doesn’t plan on doing it now just to please her.  A new visitor arrives on the island, Biricik’s brother, Ateş.  Biricik is not happy about having to take care of him since they don’t have a close relationship.

While in town, Idil witnesses Nehir pay a street musician to serenade Haziran and Poyraz in an attempt to get them together.  She finds Nehir and threatens to get her kicked off the volleyball team if she keeps trying to go against her with Poyraz.  She also threatens to shut down her mom’s store if she continues.

Later Poyraz notices Haziran is constantly on her phone and accuses her of not being able to live without it.  She denies it which leads to a bet – Poyraz claims she can’t be without her phone for a few hours and the loser will reveal a secret.  After making the bet, Haziran mentions there isn’t a place more deserted than the island, so Poyraz decides to whisk her away on his boat to a small, isolated island.  All the while, Haziran’s fear of the ocean comes in full force.  Poyraz apologizes for not knowing about her fear, so he asks if she wants to return to the island, but she refuses so she wouldn’t lose the bet.  They arrive at a small island with no electricity or any of the conveniences Haziran is accustomed to.  She’s determined to show Poyraz that she can make it and learns how to fish.  In the evening, she shares her story about the bracelet that she lost during the dance contest.  She says she got it after her father passed away and was dealing with depression.  She explains the first time she left her house after months of staying in, the first thing she saw was the bracelet.  She took it as a sign of good luck and since wearing it, it has helped her deal with a lot of tough situations.  Poyraz still has not told her that he found her bracelet and has it.

The next day, Haziran declares victory after surviving without a phone overnight.  Before Poyraz can reveal his secret of why he scratched out the name of his boat, Haziran stops him and tells him he can tell her but when he wants to not because he has to.  As they’re getting off the boat, Haziran receives a call from Batu.  At Biricik’s request, he offers her a job with a salary that will pay off half of her mother’s debts a lot quicker than waiting on the hotel.  After she mentions it to Poyraz, he tells her she has the perfect excuse to leave the island sooner than planned and walks away.  Later, Haziran expresses her disappointment to Biricik that Poyraz didn’t ask her to stay so Biricik tells her she has the chance to do what she wanted which is to help pay her mom’s bills.

At the hotel, Haziran makes an attempt to help Poyraz complete any pending tasks, so he doesn’t have to handle it by himself, however, Poyraz refuses her help.  Instead, they have a heated argument to cover the hurt they both feel over Haziran’s early departure.  They claim to not having any worthwhile memories about their time together which is clear they’re lying to themselves and to each other.

The evening before Haziran is to leave the island, they host a dinner at the hotel as a test run before it opens and includes their friends and family along with Idil and her father.  Still hurt, Haziran and Poyraz have another tense discussion claiming to not miss each other once she leaves.

On her last day, Haziran visits Poyraz to say goodbye to his grandmother and to him.  She gives him several opportunities to tell her to not leave, but he never does.  All of their friends and family secretly attempt to delay Haziran’s trip, however, Idil finds out that she may miss the ferry, so she borrows the donut delivery truck and takes her herself to make sure she gets on the ferry.  As Poyraz is putting the finishing touches on the hotel sign, he realizes that he can’t let her leave so he runs all the way to the ferry to stop her.  As the ferry is about to leave, he yells out to Haziran to stay.

I loved the reason Haziran gave Poyraz on the boat when she mentioned listening to silly conversations when she was studying in New York.  She said, “Because sometimes it’s not the conversation itself that is important, but what is important is that you are there enjoying the moment.”

I was surprised that Idil’s father, the town mayor, is not evil like her and doesn’t take advantage of his position to get what he wants or to please her.  I loved that he didn’t agree with Idil’s request to shut down the hotel just because she wants Haziran off the island.  Good for him.

My favorite part was watching Gorkam dance a Greek dance while breaking plates.  It was so entertaining and funny as they continue to fake their location to Haziran’s mother.

I really didn’t like that Idil threatened a teenager because of her crazy obsession with Poyraz.  Is she really that paranoid of Nehir’s attempts to get Poyraz and Haziran together?

Another thing I didn’t like is Biricik’s whining.  It’s annoying and very childish coming from a grown woman.  She’s obviously very spoiled, so the least she could do is watch her younger brother while enjoying the amazing views on the island.

I thought this was a good episode and I hope the beginning of new drama with the arrival of Haziran’s mother.  Since the first episode, Haziran has been keeping the truth about her actual location from her mother, but the time has come for her to come clean.  I’m hoping that in the next episode we find out why the sisters haven’t spoken to each other for years.  At first, I was not cool with the fact that Poyraz took Haziran on his boat despite her protests.  However, after he noticed she was truly afraid and offered to return but she refused, I realized that Haziran was facing her fear.  I believe her fear of the ocean has to do with her father’s death, but I guess we’ll discover that sometime soon. I hope.  I honestly do not get tired of watching all the wonderful and amazing scenery which continues to be perfect and what we all need during the summer.