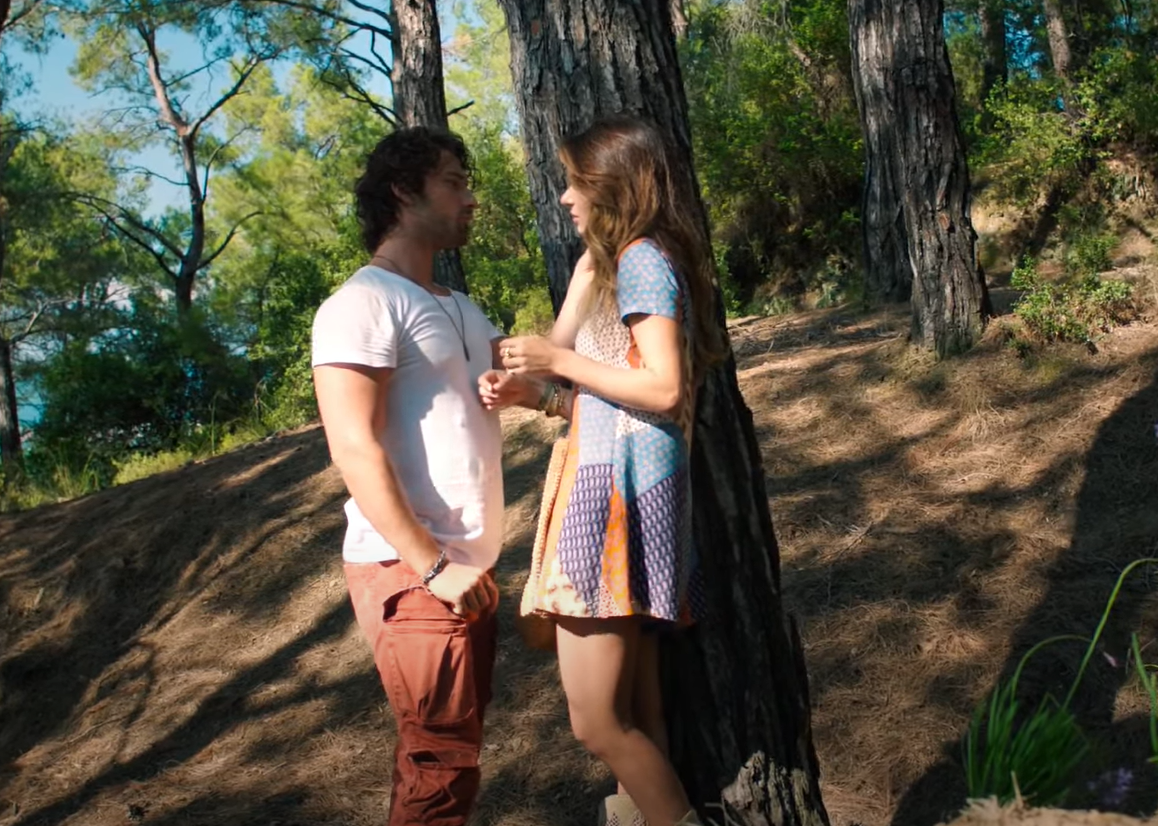 This episode begins with Hakan discovering Haziran is Poyraz’s partner.  He pretends to not know her so Haziran plays along with him.  As they leave the beach, Hakan tells Poyraz he needs to talk to him about something important which makes Haziran rush to locate Biricik to ask her to spy on Poyraz and Hakan’s conversation at Alper’s café.  However, by the time she arrives, the café is closing and Alper refuses to talk to her.

The following morning, Haziran anxiously waits for Poyraz at the bank for their meeting, but when he shows up and is acting like normal, she realizes that Hakan hasn’t revealed her secret and is so relieved she gives him a big hug.

Later, Haziran runs into Hakan and confronts him about hurting Poyraz although they’re friends and don’t understand why.  Hakan shows no compassion and says he did it for money.  Haziran asks him how he can look at Poyraz in the eyes after what he did, however, Hakan asks her the same question.  She defends herself by telling him that she didn’t know Poyraz, especially after he lied to her when he described him.  Hakan threatens to tell Poyraz the truth about Haziran’s involvement with his loan problems, so Haziran tells him if he does then he will also reveal his involvement.  Ultimately, Hakan tells Haziran that he will keep her secret if she keeps his claiming that in the end, Poyraz will end up losing.

As the engagement gets closer, Haziran faces a new obstacle.  She discovers that Idil bought all the flowers from the only flower shop on the island.  Haziran mentions it to Poyraz who doesn’t believe Idil did it to hurt her.  When Poyraz calls Idil to ask about the flowers, she volunteers to give them to her if she stops by her house to pick them up.  However, when Haziran arrives, she discovers all the flowers have died.  Unbeknownst to Haziran, Idil purposely sprayed bleach on the flowers so they would die so Haziran wouldn’t be able to use them.

Haziran shares with Poyraz her disappointment with the flowers, so he takes her to another part of the island that has a greenhouse full of beautiful flowers in an effort to solve her problem.  Unfortunately, there isn’t anyone to create the arrangements, so they’re forced to make them themselves which leads them to spend the entire night together.  Of course, when Idil finds out that her plan to ruin the party backfired, she becomes livid.

The following day, Haziran encounters another problem – the future bride and groom, Eylul and Adar, have an argument causing them to call off their engagement.  Apparently, Adar brought the wrong suit for the party, so Eylul becomes angry resulting in Adar yelling back at her.  Eylul tells him to ask for forgiveness, but he refuses and walks away.  Haziran attempts to fix the problem by asking Poyraz to speak with Adar, but he refuses, telling her that it’s none of his business.

As Eylul is about to leave the island, Adar arrives and asks her to forgive him, which she ultimately does.  And just like that, the engagement is back on!  Later that evening during the party, Poyraz becomes irritated and perhaps even sad when he hears Haziran explain to her friends how much she misses Istanbul and plans on returning to the city as soon as the summer is over.  Haziran notices the change in his attitude, but when she asks him if he’s upset, he doesn’t offer an explanation.  Upon her return to the party, Haziran sees Hakan and they get into an argument that catches Idil’s attention.  She confronts Hakan and accuses him of knowing Haziran, but he denies it.  She tells him that she knows he’s lying to Poyraz just like Haziran and vows to find out.

Later, one of Haziran’s friends informs her that he saw her house listed for sale on a website.  She becomes concerned so she calls her mom who confirms that she did list their house for sale angering Haziran.  Her mom explains she did it because she doesn’t believe Haziran will make sufficient money to pay their debt.  Hurt by her comments, Haziran accuses her mom of never have any faith in her and hangs up.  Poyraz finds her crying and after she explains her situation, Poyraz comforts her.  He tells her not to be afraid because he’ll always be by her side as they move in for a kiss.

Another great episode but I really enjoy watching the love/hate relationship between Haziran and Poyraz.  One minute, they’re getting along and even sharing tender moments together, then all of a sudden, they’re arguing over silly things they can’t agree on.  I like that Haziran speaks her mind and gives Poyraz her opinion even if he doesn’t like it.  She’s very organized and knows how to get things done which I believe Poyraz admires.

Gorkam was funny in this episode as he went in search of juicy gossip to help him spend the day.  I loved the scene when he almost fell off his chair at the beach while trying to listen to a private conversation by two islanders.  When he finally found his partner in crime in Nehir, their gossip session was entertaining.  I love that they both agreed that Idil is a snake and jealous of Haziran because of Poyraz and believe that Idil purchased all the flowers on purpose so Haziran wouldn’t have any for the engagement party.

The only thing I didn’t like is how Idil continues to change Poyraz’s grandmother's IV without gloves.  I really hope the directors correct this because it displays an unsanitary environment.

I love how Poyraz is slowly opening up to Haziran, which may hurt him more once he learns the truth.  Discovering why Haziran feels the need to keep up a conversation adds to her background.  She explains that it stems from her childhood after witnessing how her parents argued and later wouldn’t speak to each other.  To her, silence is the equivalent of problems.  Poyraz, however, is quiet because when he was still young, he lost his mother which caused him to become the reserved person that he is today.

Although I love all the beach scenes, I thought the scene in the greenhouse was absolutely perfect.  The soft lighting and all the amazing colors of the flowers provided the perfect backdrop for our couple.  It was the ideal place as they began to get to know each other more.