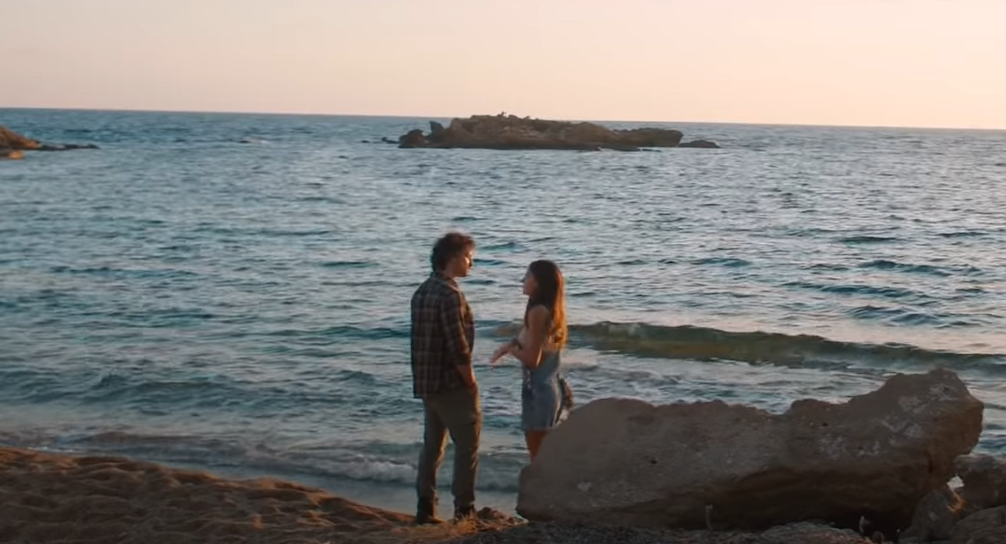 This episode begins with the aftermath of the surprise kiss Haziran gave Poyraz in front of Nehir.  Afterward, Haziran runs away but later runs into Poyraz, so she explains the kiss was an accident and for him to not take it seriously.  Poyraz, in turn, surprises Haziran by telling her that he had already forgotten about it.

The following day, the entire island is gossiping about THE KISS between Haziran and Poyraz.  Things get worse after they’re seen walking in town together.  Eventually, the news about them gets to Selma who tells Haziran she’s happy for her.  Soon the entire town is congratulating them on their new relationship which leads Poyraz to make an announcement that they are just co-workers and nothing more.  This news makes Idil happy.

Later, Poyraz tells Haziran that Nehir revealed the real reason she kissed him was on a dare while playing truth or dare and points out that he doesn’t like being involved in games.  Meanwhile, in the city, Hakan is instructed to visit the island to check how Poyraz is doing with his money problems.  Hakan refuses to return to the island, but his boss tells him it’s not an option since Haziran is on vacation.

As the day goes on, Haziran faces several challenges after she offers to provide her hotel as a venue for an engagement party.  She promises a stage on the beach but is unable to convince the carpenters to build it for her in time especially after she attempts to bribe him.  She also continues to argue with Poyraz as they work through the renovation.  She seeks help from Gorkem, her mother’s associate, so he can be the decorator.  Although he’s willing to do anything for her, he complains the entire time.  On the plus side, Biricik surprises Haziran by returning to the island for moral support.

After Sadik sees Biricik on the island, he visits Poyraz at the hotel to tell him that he remembered seeing Haziran and her friend on his last tour when Poyraz’s accounting information was stolen.  Haziran becomes nervous but tells Poyraz that she was on the tour along with several other people so many of them could have been the spy.  Sadik apologizes to Poyraz for being responsible for taking the spy to his factory, but Poyraz tells him it wasn’t his fault.  Later, Haziran asks Poyraz if he would ever consider forgiving the spy, he says no because it will be their fault if he has to sell his grandmother’s house.  This, of course, worries Haziran.

When Poyraz hears that Haziran attempted to bribe the town carpenter, he confronts her.  Haziran defends herself by telling him that it wasn’t a bribe, she was just willing to pay extra to get him to work on her job first.  Poyraz tells her the carpenter was offended because they don’t work like that on the island.  This forces Haziran to build the stage herself.  Later, Poyraz runs into Hakan in town, and it turns out they’re friends, although Hakan is a complete hypocrite.  He tells Poyraz that he heard about his situation and offers to help him, however, Poyraz tells Hakan he’s handling it with a hotel he’s remodeling to help him pay the loan.  When Hakan asks who he’s working with, Poyraz doesn’t reveal Haziran’s name.  After Poyraz leaves, Hakan runs into Idil.  It’s apparent she doesn’t like him.  He apologizes for the way he acted the last time they were together, but Idil tells him she already forgot about the situation and walks away.

Idil continues to try to get Poyraz’s attention by taking him lunch.  She uses that opportunity to attempt to convince him to accept the money her father offered him to help with his loan so he won’t have to deal with the hotel anymore.  Haziran overhears their conversation and tells Idil she originally wanted to repair and run the hotel herself, so Poyraz is free to back out of their agreement if he wishes.  Idil tells Poyraz she can call her father immediately, however, Poyraz stops her and tells her he’s not accepting anyone’s money because he prefers to earn the money himself by working.  After Idil leaves upset, Poyraz looks for Haziran and finds her sitting by the beach alone.  She tells him she’s thinking of quitting because she won’t be able to finish the repairs and decorate by herself, so Poyraz tells her he’s not quitting.  This makes Haziran very happy.

Nehir is still intent on having Poyraz and Haziran fall in love, so she develops a plan to get them together alone by texting them both to meet her at the ancient theater site.  Once Haziran and Poyraz arrive and see each other, they realize they were tricked when they can’t find Nehir.  They argue again when Poyraz thinks it’s another one of Haziran’s game.

Later that evening, Haziran has difficulties lighting the arch she built and as she’s trying to figure out the problem, it collapses.  Frustrated, Haziran falls asleep from exhaustion, and while sleeping Poyraz stops by.  He notices the fallen arch, so he fixes it and finishes the stage as Haziran wakes up.  She can’t believe Poyraz fixed it for her so while they share a sweet moment, Hakan shows up.  Uh oh.

I love the introduction of the upcoming drama between Alper and Biricik after he overhears a conversation between Biricik and Gorkem.  She’s intent on having a summer fling with him that she plans on ending once summer is over.  I hope we get some funny situations with this couple.  I liked the suspense leading up to the meeting between Haziran and Hakan, although I didn’t think they would see each other for the first time on the island with Poyraz.  I can’t wait for the results of that conversation.     This show continues to dazzle us with beautiful scenery.  My favorite scene from this episode was at a sunset with Haziran, Biricik, and Gorkem at the beach.  It was breathtaking.

Although I loved the majority of the episode, I didn’t like that Haziran was suddenly being very clumsy.  She stumbled three times in this episode.  THREE TIMES.  I find it hard to believe that this city girl who walked on skinny heels like nobody’s business on the first episode is now tripping or stumbling all over the place.  Yes, it does create the opportunity for Haziran and Poyraz to get close, ama there are a lot of different situations that can create that situation.  It was cute the first time.

I think the tree that Haziran painted in her room will be the cause of her discovery, especially since she added her secrets in semi-invisible ink.  I also think Idil will discover it and run to Poyraz with the information.  I think Hakan’s resentment towards Poyraz has to do with the fact the everyone on the island loves him and not Hakan.  It’s unfair especially since Poyraz helped him get his current job as well as looked out for him after his father passed away when they were young.

I enjoyed this episode a lot even with all the unnecessary scenes with Haziran falling down.  I hope we find out why Hakan harbors bad feelings towards Poyraz soon as well as the reason for the argument between Haziran’s mother and aunt.  I’m guessing it has to do with a man.  And last, I really loved the last scene with Haziran and Poyraz standing under the beautiful arch at the beach.  It was perfect as the moonlight fell down on them while they shared a tender moment.