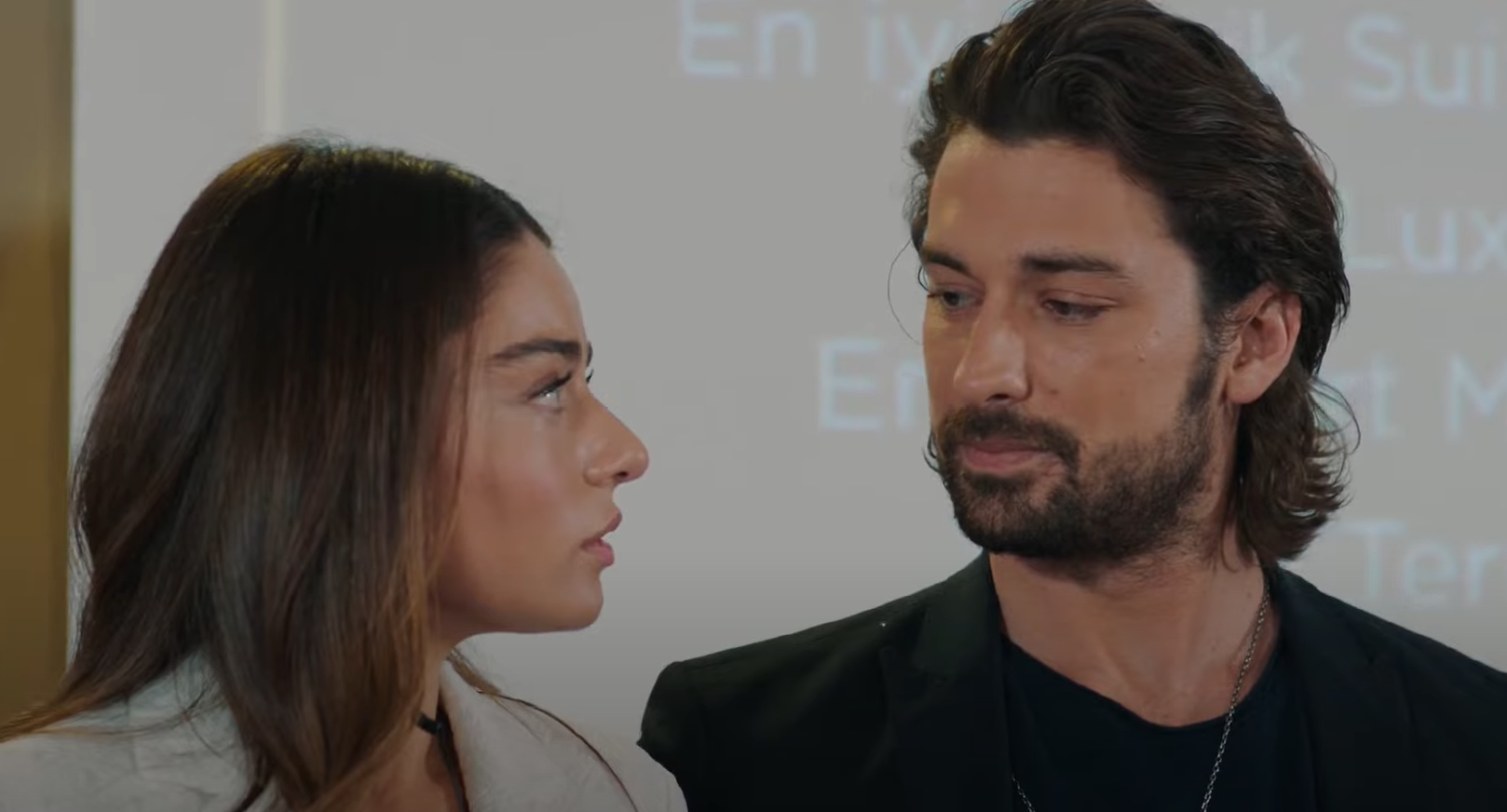 The episode begins with Haziran and Poyraz missing each other after she moved to Izmir.  She refuses to tell anyone her new location to get away from everyone, especially Poyraz.  However, things don’t go well for Haziran as she struggles to adjust back to city life.  As she attempts to find a job, her first interview is with a man who becomes rude to her after he recognizes her as the person who ruined Mr. Doygun’s reputation.  Haziran leaves frustrated and runs into a man on the street causing him to drop his cake.  She offers to replace it and while buying it, she tells the man her situation of looking for a job, so he surprises her by offering her a position.  Haziran is reluctant until the man introduces himself as Kutai Areal, owner of several hotels.  He convinces her to attend an award ceremony that same day which is being held at one of his hotels as a trial to see if they will be able to work together.  Haziran agrees.

Meanwhile, Poyraz forgives his grandmother for the secrets she kept from him about his mother and asks her to do the same with Ayten, with who he is attempting to establish a relationship.  Both ladies agree.  Later, Poyraz discovers his hotel was nominated for an award but refuses to attend the award ceremony in Izmir.  He finally agrees after his friends insist that he attend to distract himself and perhaps run into Haziran.  Once Poyraz arrives at the hotel in Izmir, it turns out to be the same one that Haziran is staying in.  They finally see each other at the awards ceremony.  At first, Poyraz believes Haziran is there for the award too, but soon discovers that she works there so he becomes upset that she is already making a new life without him.

Once the ceremony is over, Poyraz receives a surprise visit from Alper and Melissa who hope to see if Haziran also attended.  Poyraz informs them that she is there but because she works there and not to see him.  Melissa and Alper notice that Poyraz and Haziran are still not speaking, so they attempt to get them back together by locking them in an elevator.  Their strategy doesn’t work.  Instead of making up, Haziran and Poyraz agree on officially breaking up as they erase photos and their phone numbers from their phones to begin new lives away from each other.

During the hotel party that evening, Haziran becomes annoyed when she sees Poyraz having a good time celebrating with Melissa and Alper.  Later, Poyraz notices a man being aggressive with Haziran so he attacks him.  After the fight is broken up and Poyraz leaves, Mr. Areal tells Haziran that they may not be a good fit and rescinds his job offer.  Unbeknownst to everyone, Mr. Areal planned the altercation by hiring the man who was beaten up by Poyraz.  It is also revealed that Mr. Areal was the person interested in taking over the island and was working with Mr. Doygun.  Mr. Areal intends to continue with his plans to take over the island but his new strategy involves using Haziran to take away her shares of the hotel first.

Back on the island, Idil accuses Batu of crashing into Poyraz after noticing a seatbelt bruise on his chest.  He gets arrested but is later released when additional camera footage is discovered that shows Batu crashing a car into a wall on purpose the same night Poyraz was attacked.  It is revealed that Batu was attempting suicide and is declared innocent of trying to hurt Poyraz.  Idil is devasted knowing that she accused Batu without giving him benefit of the doubt.  After he’s released from jail, Idil tries to apologize but he ignores her.  She refuses to give up, so she pleads with him to forgive her in the middle of town.  He finally forgives her.  Later that evening, Batu invites Idil to see him in his hotel room but when she arrives, she catches him with another woman.  He tells her that he will never forgive her for what she made him go through.  After Idil leaves, Batu pays the girl for playing a part in his plan to hurt Idil.

Haziran confronts Poyraz for ruining her new job and is angry about getting her fired after he fought at the hotel.  Poyraz finally confesses that he attended the awards ceremony in hopes of seeing her and taking her back to the island.  Haziran reminds him that he’s the one who kept trying to get rid of her and tells him that she has no plans of returning and asks him to forget her.  Devastated, Poyraz shouts that he wishes she had never arrived on the island.  Hurt by his actions, Haziran agrees that she’s sorry she ever went to the island and met him.  Ultimately, they tell each other that they hate each other and walk away angry.

I love that Selma proposed to Fatih after he unselfishly offered to help her pay for Nehir’s college so she wouldn’t have to sell her house.  Fatih stepped in and provided another alternative.  I think they are the nicest couple on the island and will make the best family after they get married.

I like that Biricik opened her own jewelry store and is working on becoming independent.  I hope the contractor who helped Biricik with her store remodel is a potential love interest.  He seems like a good fit for her and a better option than Alper.  She deserves to be happy, so I hope he’s it for her and doesn’t give her more heartache.

I don’t understand how Zeynep is always providing support and comforts Idil when she doesn’t do either for Haziran.  Instead, she praised Haziran for leaving her loved ones behind.  I don’t understand why Batu stayed quiet while being accused of hurting Poyraz.  If he was that ashamed of admitting to hurting himself, then why did he do it in the first place?

I look forward to the arrival of Sinan, Poyraz’s real father.  Since he’s a bad person, I hope that his storyline will provide an interesting story that will add good drama.  I think he will face an angry Poyraz who will want to protect his mother if he attempts to take her away from him again.  We now have another candidate who may have wanted to hurt Poyraz.  I think it’s either Sinan or someone hired by Mr. Areal.

I didn’t like the ending to this episode.  I’m disappointed that the storyline took Poyraz and Haziran to the “I hate you” cliché.  I was hoping that they would continue with their civil breakup until they realized that their relationship is worth any obstacle they encounter.  I’m sad that our beloved couple said some harsh things to each other but I hope that they realize their mistake and go back to each other.