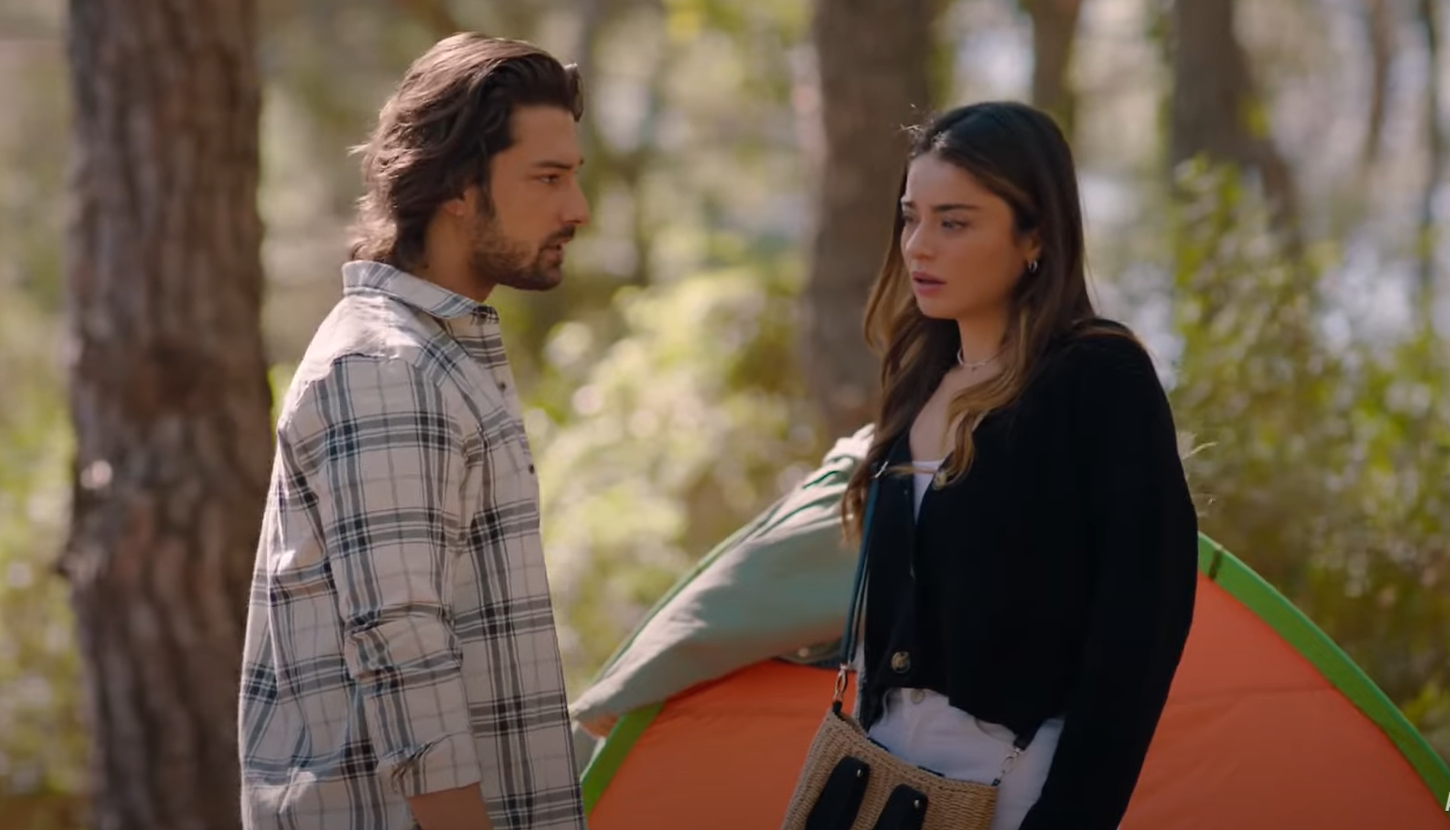 Episode 17 begins with everyone looking for Poyraz who escaped from the hospital after the car accident.  While looking for him around town, Haziran remembers a place in the forest that Poyraz took her and said it would be their secret place if the end of the world occurs.  She rushes there and finds an angry Poyraz who refuses to listen to her.  He demands that she leave him alone, but she refuses.  She attempts to explain that she was not aware that Aytan is his mother, but Poyraz believes she has betrayed him again.  Haziran decides to stay with Poyraz due to his injuries despite his objections.  Later, Poyraz admits to Haziran that he wants to be with her again, but their relationship is too confusing with too many factors involved that don’t allow them to be together.  Alper and Melissa arrive to check on them but after they leave, things get tenser between Haziran and Poyraz.  She realizes that she is always the one going after Poyraz and he has never once gone after her when they experience problems.  Haziran expresses her frustration, especially when he is constantly pushing her away except when she needs help, then he appears to like to play the hero but then doesn’t want anything else to do with her.

The following morning, Poyraz receives bad news about Zorba and rushes back to town to find out that he’s getting emergency surgery.  Fatih saves Zorba who begins to recover quickly.  Meanwhile, Melissa has a hard time transitioning her relationship with Alper from friend to boyfriend.  Her attitude worries Alper, who ultimately surprises her with a marriage proposal.

The next day, Haziran and Poyraz sit down so she can tell him what his mother told her about her past.  In flashback scenes, a young Aytan escapes an abusive marriage in Istanbul.  When she arrives on the island, Zeynep introduces her to Poyraz’s father who falls in love with her and gets married.   After years on the island, Aytan’s first husband finds her so she leaves Poyraz and returns to Istanbul so he wouldn’t realize that Poyraz was his son.  She hides his true identity so he wouldn’t get abused as she did.  Years later her first husband becomes seriously ill so Aytan gets the opportunity to return to the island for Poyraz, but Ms. Aliya didn’t allow her to take him.  Aytan tells Ms. Aliye that Poyraz isn’t her biological grandson, but Ms. Aliya refuses to believe her and tells her that Poyraz hates her.  Aytan is so devastated that she leaves and doesn’t return again.  The truth about Poyraz’s real father is what caused Ms. Aliya to fall into a coma.  At that moment, Aytan arrives to speak with Poyraz.  He finally agrees to hear her out and realizes that she made a lot of sacrifices so that he would have a normal childhood away from an abusive father.  He ultimately accepts her as his mother.

Idil and Batu continue to get closer despite her father’s objections.  Batu is questioned by the police after they discover that Poyraz’s car accident was intentional.  After Idil realizes that she is truly in love with him, she makes a shocking discovery when she sees a bruise on Batu’s chest that appears to be from a seatbelt.  She realizes that Batu is the person who crashed into Poyraz.

Later, Poyraz and Aytan visit Haziran but find her apartment empty and discover a letter for Poyraz from Haziran.  The letter is a good-bye letter.  Haziran explains that “No one leaves without a reason.”  She says she’s tired of him never believing her and doubting her as well as him constantly pushing her away during his hard times.  For those reasons, she has decided to leave him and the island.

I don’t think the reason behind the hate between Ms. Aliye and Zeynep is sufficient for them to not want Poyraz and Haziran together.  Just because Zeynep introduced Ayten to Ms. Aliye’s son is not a justification to forbid them to be together.  It makes no sense whatsoever.

I don’t understand Batu’s need to hurt and hate Poyraz unless there’s a secret that we don’t know about yet.  Why did he intentionally crash into him and then appear to cry from anger as he printed Poyraz’s photo when he went missing?  Is it perhaps because of Idil?  Has he truly fallen in love with her that he can’t fathom the thought that she loved Poyraz for so many years or is he just crazy and obsessed with Poyraz?  He does act like a maniac but why does he continue to want to hurt him?

I think it’s about time Haziran called out Poyraz for his behavior and actions.  He continues to disregard Haziran when she wants to explain herself to him (which she shouldn’t do ama neyse) and instead believes everyone else.  He still doesn’t listen to her and continues to push her away.  I’m happy that she left him and the island.  I think she needs to make herself a priority and think of her wellbeing.  If Poyraz truly loves her then he will do the right thing and prove to her that he has changed and fight for their love.

Overall, I didn’t like this episode because of Poyraz’s behavior towards Haziran.  I’m tired of watching Haziran go after him while he continues to disregard her.  I also did not like watching Melissa act so indecisive about her relationship with Alper.  I understand they were friends for years, but if she was in love with him since childhood, then shouldn't she be happy that Alper is giving her the love and attention she always wanted?  I did, however, enjoy watching my favorite trio back together again:  Haziran, Gorkem, and Biricik.  I have missed seeing them together but in this episode, Gorkem and Biricik were back where they belong, next to Haziran giving her their unconditional support and love.