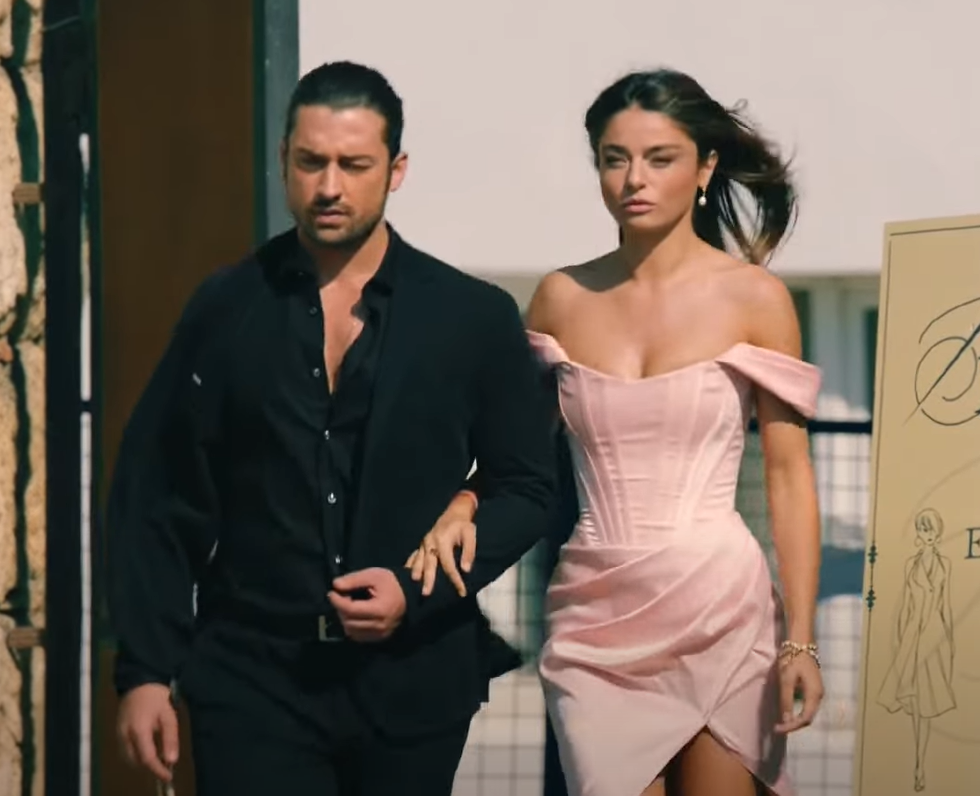 Episode 16 begins with Haziran explaining to Poyraz that they are now strangers because he never asked her if she was interested in looking for a job in Tokyo and instead went behind her back to get it for her.  Meanwhile, Batu meets with Ayten, Poyraz’s mother, in Istanbul.  She denies her identity at first but ultimately falls for Batu’s lies when he says he’s dying and she becomes worried.  Before he leaves, he recommends that she check on Poyraz because he isn’t happy and mentions Haziran.

Poyraz receives word that their third hotel partner has sold their shares.  They discover from Batu that he’s their new partner causing Poyraz and Haziran to become angry at him.  As they argue, Alper and Melissa stop by the hotel to inform them that there is someone buying a lot of land on the island and taking over businesses.  They discover it’s Mr. Doygun, Haziran’s previous employer.  Haziran and Poyraz attempt to speak with him, but he sends them away but confirms his plans of taking over the entire island to convert it into a resort.

Ayten arrives on the island but keeps a low profile so no one can recognize her except for Ms. Aliye who demands that she leave Poyraz alone but she refuses.   She reminds Ms. Aliye that she initially left the island so that Poyraz would live a happier life but has discovered that Poyraz is not happy.  Ms. Aliye attempts to threaten her, but Ayten doesn’t let her scare her off because she plans on telling Poyraz the truth behind her leaving which worries Ms. Aliye.  Ayten tells her that Poyraz himself will decide who he wants to be with after learning the truth.  While sightseeing, Ayten runs into Haziran and offers her comfort while Haziran explains why she’s crying.  While they speak, Ayten doesn’t reveal her true identity attempting to see who Haziran really is.

Haziran, Biricik, Poyraz, Alper, Melissa, Idil and Batu, form an alliance to save the island.  Haziran and Biricik formulate a plan to get into Mr. Doygun’s house to copy his plans and reveal his true intentions to everyone.  While Idil and Batu distract Mr. Doygun, Haziran and Poyraz sneak into his house and take photos of the plans.  The following day, the crew gets access to the fashion expo being held for a famous designer, Lodo.  While at the show, they sneak the plans into the presentation, and in front of everyone reveal Mr. Doygun’s lies and false promises he’s been making to the islanders.  Mr. Doygun leaves but not before threatening them and promising to return.

At the end of the expo, Lodo’s identity is finally revealed, and it turns out to be Aytan, Poyraz’s mother.  While on the stage, she thanks Haziran for supporting her since returning to the island.  This makes Poyraz think Haziran has been deceiving him by not telling him that she was there, however, Haziran didn’t know her true identity.  Poyraz refuses to listen to his mother and Haziran and storms out of the event devastated thinking Haziran has once again betrayed him.

Haziran follows him trying to explain that she didn’t know who she is, but Poyraz doesn’t believe her.  As he drives off, another car crashes into him.

I love that Biricik and Haziran finally made up and had a heartfelt conversation that was way overdue.  I think this will make them closer so they can again be supportive of each other.

I think Zeynep is a hypocrite.  She supported Idil after she was caught with Batu by her father.  Zeynep stood up to Latif after he forbid Idil to be with Batu.  She also interfered and told Latif that he should let her do what she wants since she’s an adult.  I’m glad Latif reminded Zeynep of how she was completely against Haziran’s relationship with Poyraz with no justification.  I don’t understand how she can support Idil when she never supports her own daughter and doesn’t care if she’s happy or not.

I think Batu’s father is the person behind the plan to take over the island.  When he was run off the island, he promised he would get revenge on both Poyraz and Batu.  I also think it’s his doing otherwise why would a tourist company need bodyguards.  Very odd.

I’m not happy with the ending of this episode.  I can’t believe Poyraz is back to not believing Haziran and being unfair and harsh to her.  I hate that he never listens to her or allows her to explain herself.  Poyraz’s character needs more development.  I’m honestly annoyed that Haziran was pleading with him AGAIN to believe her.  Yeter.  I wish Poyraz would give her the benefit of the doubt and let her explain her situation to his mother.  Haziran shouldn’t continue to beg him to listen to her.