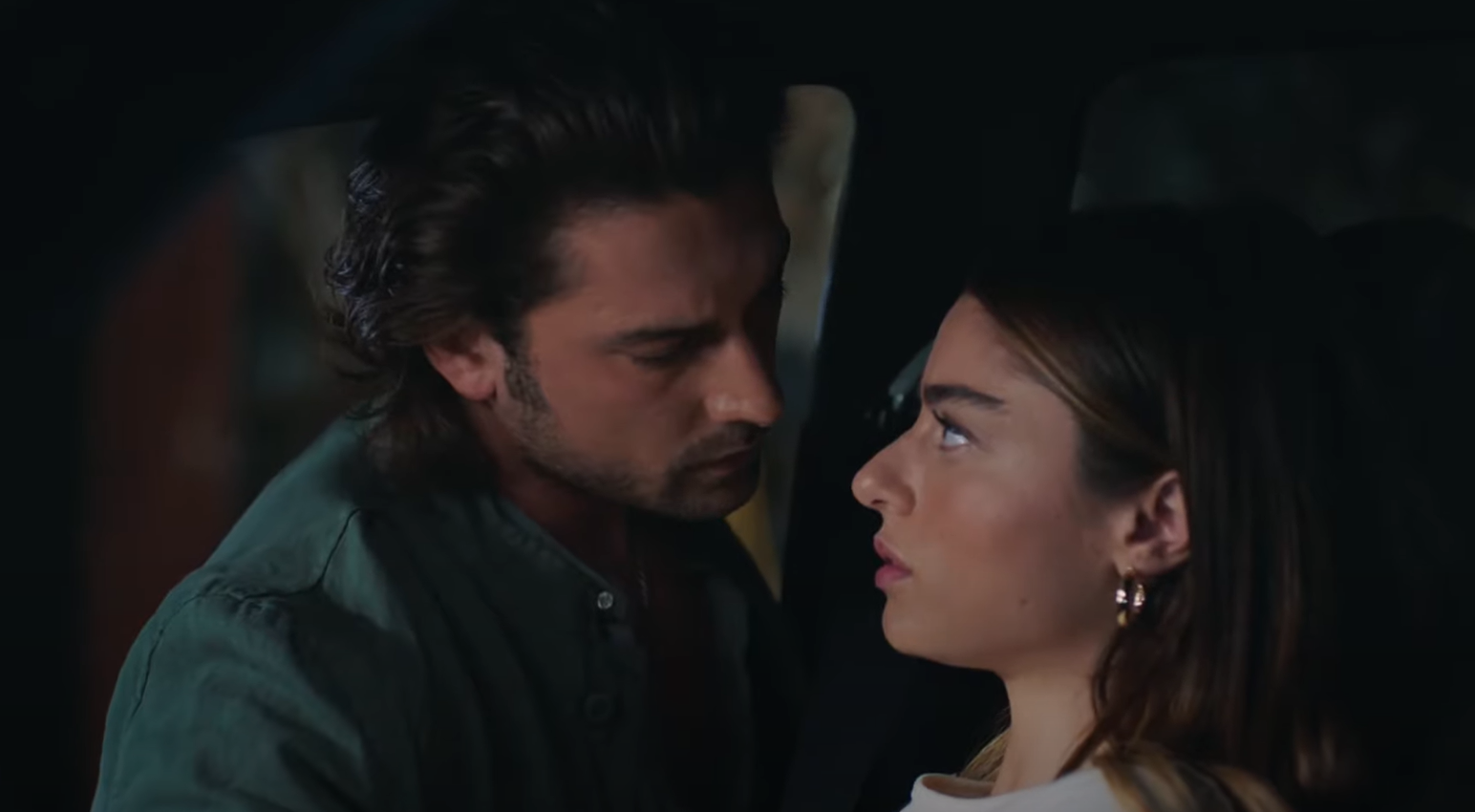 Episode 15 begins with the aftermath of Poyraz and Haziran’s emotional and heartbreaking breakup.  Poyraz discovers that someone has paid off his debt and after confronting Ms. Aliye, she confirms getting the money from his mother.  Poyraz becomes infuriated and moves out but not before promising her that he intends on paying back the money because he doesn’t want anything that comes from his mother.  Meanwhile, Haziran discovers that Biricik has taken away Melissa’s café and confronts her about it.  She tells her she’s acting out of anger and not because she was in love with Alper, but Biricik refuses to listen especially since Haziran hasn’t bothered to spend time with her.

Out of nowhere, Haziran receives a job offer in Tokyo.  Surprised, Haziran believes her mother used her contacts in an attempt to get rid of her, but Zeynep is clueless.  When Haziran informs her that she has no plans on leaving, Zeynep forges an eviction notice so she has nowhere to stay to prompt her to leave.

While at the hotel, Haziran discovers Poyraz is responsible for getting Haziran the job.  She is devastated to know that he is doing everything he can to get her away from him and erroneously believes that he’s also selling his oil factory so he doesn’t have to continue to work at the hotel with her.

After Haziran finds out she was evicted, she packs up and moves into her hotel – unknowing that she chose the same room that Poyraz has moved into as well.  Later, Haziran decides to let off steam and joins Gorkem and Melissa on a joy ride in his new car.  They stop in town to buy drinks and see Idil with Biricik.  Before they leave, they also encounter Poyraz with Alper and Sadik who are on their way to go fishing.  They all stare at each other upset thinking that no one has a care in the world after all their recent relationship problems.

While getting drunk, Haziran tries to convince herself that she will get over Poyraz and decides to make him pay for trying to get rid of her.  At the same time, Poyraz and Alper also convince themselves that they will get over their breakups.  Poyraz confesses that although he’s sad that Haziran is leaving, he wants to see her happy by helping her get her dream job so she can go back to the life she had before the island.  Of course, he believes this is what Haziran wants after listening to Zeynep.  Later, Haziran, Melissa, and Gorkem are approached by islanders who ask them to leave but they refuse as they continue to party late into the evening.  The islanders ask Poyraz for help to make them leave to avoid another confrontation.  After a struggle, the boys end up taking them home.

The following morning, Haziran and Poyraz wake up in the same bed.  Poyraz informs Haziran that he left home while Haziran lies and tells him that her house is being sprayed for bugs.  Remembering her plan to make Poyraz regret that he’s trying to get rid of her, Haziran asks Poyraz if he wants to go shopping with her as she prepares for her new job.  Poyraz agrees.  Afterward, as Haziran is packing, Poyraz suggests they have dinner together before she leaves.  During dinner, Haziran makes a last attempt to make Poyraz confess that he got her the job but instead he tells her to have a safe trip.  Devastated, Haziran returns to her hotel room and prepares to leave.

Meanwhile, Batu discovers who the third hotel owner is and meets with their lawyers to buy their share.  He informs Idil what he did and asks her to help him teach Haziran and Poyraz a lesson for making them feel unimportant.  Idil refuses so Batu confesses that he did it because he loves her.  After sharing a kiss, Idil agrees to work with him.  The following morning, Idil discovers that Batu has left the island without telling her his reasons.  In actuality, Batu goes to Istanbul to speak with Poyraz’s mother.

On her way to the ferry, Haziran changes her mind about leaving and returns to the hotel.  She confronts Poyraz to tell him that from now on, he is a stranger to her for going behind her back to attempt to get her off the island.  She refuses to leave just to make Poyraz more comfortable and informs him that she doesn’t plan on going anywhere.  Lastly, she promises that he will see a different Haziran going forward.

I’m not happy that Haziran and Biricik no longer spend time together.  However, it made sense in this episode that Haziran was with Melissa and Biricik was with Idil because of their similar relationship situations.  I’m happy that they had someone to talk to and share their true feelings.  I’m hoping for a reunion between Biricik and Haziran soon.

I’m happy that Biricik finally forgave Alper after he acknowledged that he hurt her and apologized, which is what Biricik wanted to hear.  She figured out that Alper loved Melissa and also had feelings for her, but deep down, she knew that he was truly in love with Melissa.  After their discussion, Biricik returned the café to Melissa.  I knew Biricik did not have any intentions of running a business.  She’s such a nice person and didn’t deserve to be hurt.

I don’t understand why Batu is still trying to ruin Poyraz after he saved him from his abusive father.  Why is he so intent on hurting Poyraz?  Is it because the two women in his life preferred him?  Or is it because of the deal he made with Haziran’s mother?  I was surprised that we finally got to see Poyraz’s mother but more surprised that Batu went to see her.  I’m sure she will be returning to the island soon and will encounter a mad Poyraz and even madder Ms. Aliye.  I hope she knows why Zeynep and Ms. Aliye are against Poyraz and Haziran’s relationship.

Haziran promised we will see a new Haziran at the end of the episode.  I really hope that’s true and Haziran reverts to the same strong and independent girl from the beginning.  Her character has slowly gotten weaker allowing her mother and Ms. Aliye to tell her what to do.  I want her to stand her ground once she finds out that she will be working with Batu and Idil.  I hope we don’t have to watch silly arguments as they butt heads because it gets annoying quickly.