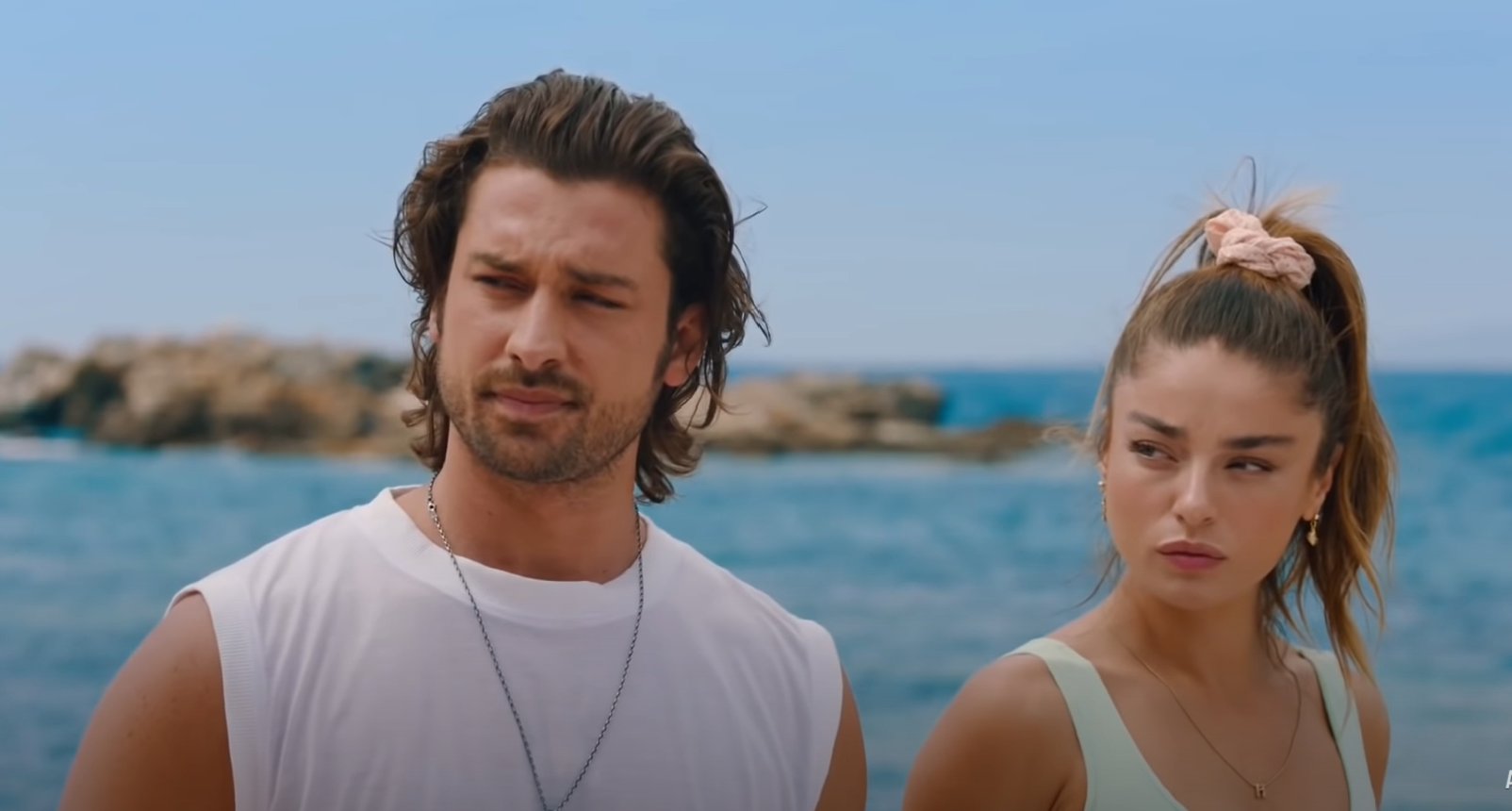 As Haziran and Poyraz begin a secret relationship, they enjoy an early morning swim lesson before anyone sees them together.  As they’re leaving the beach, they encounter other people, so they have a pretend argument to spark the gossip on the island that they broke up.  Sure enough, in a matter of minutes, everyone learns of their breakup making several people very happy, especially Idil and Batu.  When they go to the hotel to confirm the news, they join the volleyball competition and play against Poyraz and Haziran, who end up winning.

One of Zeynep’s old neighbors has returned to the island along with her son with the intent of asking for Haziran’s hand in marriage.  At first, Zeynep is against the idea but when she learns the son attended Harvard University, she considers their request without informing Haziran.

In the aftermath of Biricik exposing them, Alper and Melissa regret what they did.  Alper attempts to ask Biricik to forgive him, but she is not interested in listening to him and refuses to give him the opportunity to explain.  When Haziran visits Biricik, she finds her extremely angry and tries to convince her not to get revenge until she calms down.

Batu and Idil make plans to find out why Poyraz and Haziran broke up since they suspect that they’re lying.  They decide to meet alone with them to get details about their breakup.

Later, Poyraz and Haziran attempt to have a romantic evening together, secretly, however, their plans are ruined when Biricik drops by and interrupts them.  She ends up staying late forcing Poyraz to sneak out after hiding in the kitchen for hours.

The next day, Haziran receives an urgent call from Zeynep to see her.  When she arrives, she’s shocked to hear that her mother has arranged a meeting with a prospective suitor who is asking to marry her.  Since news travels fast on the island, Poyraz rushes to Selma’s house when he hears the news.  When he arrives, Haziran is already leaving after refusing to accept the marriage proposal.  Before Poyraz can hurt the prospective suitor, Haziran assures him that she is only interested in him.  As they discuss their secret relationship, they both receive calls from Batu and Idil so they prepare the next part of their plan.

Biricik continues to be mad at Alper and Melissa.  When Melissa attempts to speak with her, Biricik refuses to listen to her and decides to get back at her by finding out who owns her café to try to take it away from her.  Later, Melissa finds Alper and tells him that she’ll help him get Biricik back because she hates that they hurt her.

Poyraz takes Batu out to a remote part of the island with the excuse of helping him cut wood.  After a while, Batu lets it slip that Zeynep called him to the island to break them up and take Haziran back to Istanbul and promised him anything in return for his help.  Meanwhile, Haziran meets with Idil to inform her that she will accompany her to the doctor so she can start treatment for her illness and doesn’t accept Idil’s protests.

While at the doctor, Idil becomes extremely nervous when the doctor plans on running more tests before starting a treatment plan.  When she attempts to leave, Haziran asks her if she’s afraid of being discovered that her illness was a lie.  Idil admits that Ms. Aliya has known about the lie and allowed her to continue if it meant getting Poyraz to pay attention to her.  Haziran and Poyraz realize that their true enemies are their own loved ones.

Haziran confronts Ms. Aliye about allowing Idil to deceive Poyraz about her fake illness.  She tells her that no one will love him or understand him more than her so Haziran tells her that Poyraz will be devastated when he finds out what she did.  At the same time, Poyraz confronts Zeynep and tells her that he can’t believe that she would rather see Haziran with Batu who will end up hurting her.  Zeynep tells him that they are too different, but Poyraz assures her that he will always be by Haziran’s side to protect and defend her.

Later, Haziran and Poyraz meet at his factory where they reluctantly give each other’s bad news making them realize that their own close family members are doing everything that they can to separate them.  Poyraz promises to do something to make them regret their actions.

The next day, Idil, Batu, Zeynep, and Ms. Aliye receive a text to be at the hotel that evening.  When they arrive, they get the shock of their lives when they realize they’re attending Haziran and Poyraz’s wedding!

I really enjoyed the scene with Idil and Batu as they watched a dizi together and then later crying over the story.  I especially loved it when they both realized that they were living the same situation as the dizi couple.

Melissa and Alper have turned into fools.  Why does Alper continue to hurt and confuse Biricik when he is obviously in love with Melissa.  And why is Melissa helping him get back with Biricik knowing that he doesn’t love her? Are they that ignorant of Biricik’s feelings and don’t realize that they are just hurting her?  I think that they are trying to clear their conscience and trying to look good with their fellow islanders who have taken Biricik’s side.

I think the mysterious woman that Ms. Aliye met in Istanbul was Poyraz’s mother.  I don’t understand how Ms. Aliye could demand money from her to help Poyraz pay his debt to get him away from Haziran.

I think Nehir is being unfair to Selma and Fatih.  She must know the kind of person Fatih is, so I don’t understand why she refuses to accept their relationship.  Nehir needs to realize that she will be going away to college soon or move away leaving her mom alone.  Selma is a good person and Fatih seems to be the perfect man for her.  Nehir needs to give Fatih a chance and stop being rude to him.

And last, I don’t think the wedding between Poyraz and Haziran is real.  I think they’re faking it to teach their family a lesson for lying to them.  Poyraz is too much of a gentleman who follows their traditions when it comes to marriage.  Although the quickie wedding they organized looks lovely, I want to see them go through all the details as they plan their beautiful wedding together.  I can’t wait to see if my thoughts are correct.