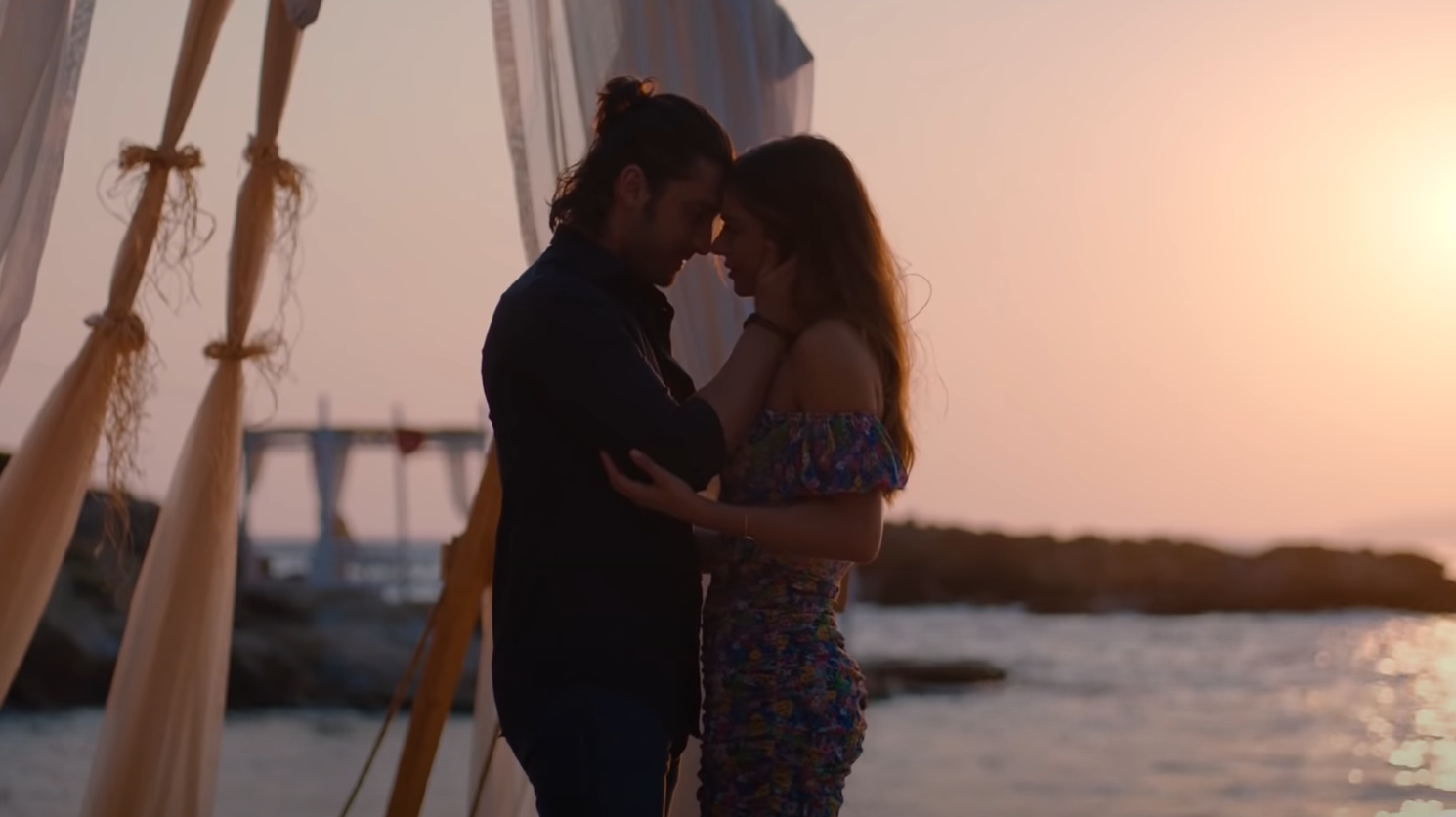 In episode 11, after Poyraz knocks Batu unconscious, he’s taken to the hospital while Poyraz is taken to the police station for questioning and ultimately is arrested.  The next morning, he’s released after Batu declines to press charges.  Once released, Poyraz is upset and refuses to speak with Haziran because he thinks she stayed with Batu all night in the hospital when she was really outside the police station.

After Poyraz discovers that Batu was pretending to be unconscious, he finds him and kicks him out of the hotel and into Haziran’s house after an unsuccessful attempt of finding him another hotel.  Batu secretly reserves all the available hotel rooms on the island so he can stay with Haziran.  However, Poyraz takes Batu into his house to get him away from Haziran.

Meanwhile, Idil continues to pretend she’s ill to get Poyraz’s attention but panics when he tells her that he found a specialist in Istanbul who has agreed to treat her.  Since Poyraz is still upset with Haziran, he takes Idil to Biricik’s party but quickly leaves after finding out that Haziran will not be attending to take care of Batu.

Biricik continues to have suspicions that something is going on between Alper and Melissa so, during her party, they play Truth or Dare.  She asks Melissa to reveal who she’s in love with, so Melissa lies and claims to be dating Burak.  The day after the party, Melissa visits Gorkem and as they discuss her situation, Biricik overhears her confession about kissing Alper.

It’s Haziran’s birthday but everyone forgets including her mom.  After Haziran tells Batu to return to Istanbul, he continues with his plan and tries to get information about Poyraz’s past from Nehir.  Later, Poyraz calls Haziran to meet him at the hotel and once she arrives, he surprises her with a birthday dinner by the beach promising to stay with her no matter what happens.  As they share a kiss, Idil and Batu watch them as they agree to become partners to break them up.

Episode 12 begins with Poyraz taking Haziran to his favorite place on the island located on top of a mountain that overlooks the entire island as they celebrate their first day as a couple.  They vow to never let anyone break them up but as the news of their relationship travels the island, several people are not happy about it including Zeynep, Idil, Batu, and Ms. Aliye.

Poyraz and Haziran are informed that Batu is on their beach so Poyraz rushes to get rid of him, but Batu explains that he can’t return to Istanbul because of his family situation that he’s running away from.  He pleads for their help, but Poyraz doesn’t believe him and demands that he leave immediately.  Instead of leaving, Batu visits Ms. Aliye and drugs her to sleep to search their home for something he can use against Poyraz.  The only thing he finds is a photo of a young Poyraz with a woman that has her face cut out.

Later, Poyraz and Haziran go on their first date where he surprises her with a gift of violet earrings he made for her, which symbolizes a love that needs to be protected.

As they enjoy their date, Batu and Idil show up causing Poyraz and Haziran to leave, however, Idil faints as she tries to explain to Poyraz that she’s not dating Batu.  Worried, Poyraz takes Idil to his house where Ms. Aliye demands Idil to stop faking her illness or she will tell Poyraz about her lies.  Frustrated that Poyraz is neglecting her, Haziran leaves abruptly ending their first date on a bad note.  However, they make up the following morning.

Batu finds a new place to stay - Idil’s house.  Upset, Idil demands Batu that he leave but notices the bruises on his back, some old, some new.  He explains that the bruises are from his father which is why he ran away to the island.   Idil understands Batu when he confesses his secret, so she tells him her secret about her fake illness.  Batu uses her confession against her to get information about Poyraz threatening to tell Poyraz if she doesn’t.

During the island fair, Haziran receives a package with a photo and a note about Poyraz claiming that he’s hiding something from his past that includes him going to jail.  Haziran shows the information to Poyraz who finally tells her the story about his mother.  When he was 13, he went to Istanbul to search for his mother who he found living in poverty with her new husband.  She was happy to see him but not her husband.  Poyraz believed that his mother was asking his grandmother for permission to keep him but once they return to the island, her husband’s intent was to leave him there.  His mother and her husband get into an argument that caused Poyraz to protect his mother from being hit.  In a fit of rage, Poyraz grabs a knife but blacks out and is uncertain of what happened.  The next thing he remembers is his grandmother finding him holding a bloody knife.  He was put in juvenile jail for six months while his mother returned to Istanbul.  Poyraz never saw her again and doesn’t want to because she never defended him or supported him with the police and allowed them to take him.  Haziran promises to never leave him or allow anyone to break them up.  While they hug, Batu watches them knowing that his plan didn’t work.

As the fair ends, Biricik tries to convince Melissa to go with her and Alper but Burak’s real girlfriend shows up accusing him of cheating on her with Melissa.  This causes Melissa to confess that she wasn’t dating Burak.  Biricik asks her to explain why she lied but she refuses so Biricik announces to the entire town that Melissa and Alper cheated on her with each other.

Poyraz discovers that Batu was the person who sent the photo and note to Haziran, so he goes to search for him.  Before he gets the opportunity to beat him, Haziran and Idil show up and prevent him from making another mistake.  Idil takes the opportunity to confess to Poyraz that Batu was helping her to break them up so she could be with him.  She tells Poyraz that she’s in love with him and her last wish is to be with him.  After Idil and Batu leave, Poyraz figures out that Idil is lying about her illness and tells Haziran that she and Batu are working together to break them up.  Haziran is dumbfounded that Idil would go that far and suggests they get revenge on them.  Poyraz agrees and comes up with a plan to have a fake breakup so everyone will leave them alone while secretly seeing each other.  Haziran happily agrees.

I love how Batu calls Haziran “Hazi” just to annoy her.  I’m also loving Poyraz’s new hairstyle as well as his more appropriate wardrobe.  The lighter colors are definitely an improvement and are more suitable for island life.  I really enjoyed watching Zeynep and Selma makeup and having a sister relationship.  I think Haziran is being unfair to Biricik who was always helping her and listening to her when she needed a friend.  I don’t like that Haziran would rather confide in Melissa than her best friend.  I do wonder if Haziran will continue to speak with Melissa after learning that she kissed Alper.  I hope that we get to see more of Batu’s situation especially after finding out that he is the son of a mafia leader.  I think it's odd that no one ever visited Sadik in his home before Gorkem.  The islanders claim to be close, yet no one has ever taken the time to spend time with Sadik.

And last, I really like Haziran and Poyraz's idea of having a secret relationship.  I have a feeling it will bring out a lot of jealousy as their family and friends try to pair them up with other people.  Can't wait!