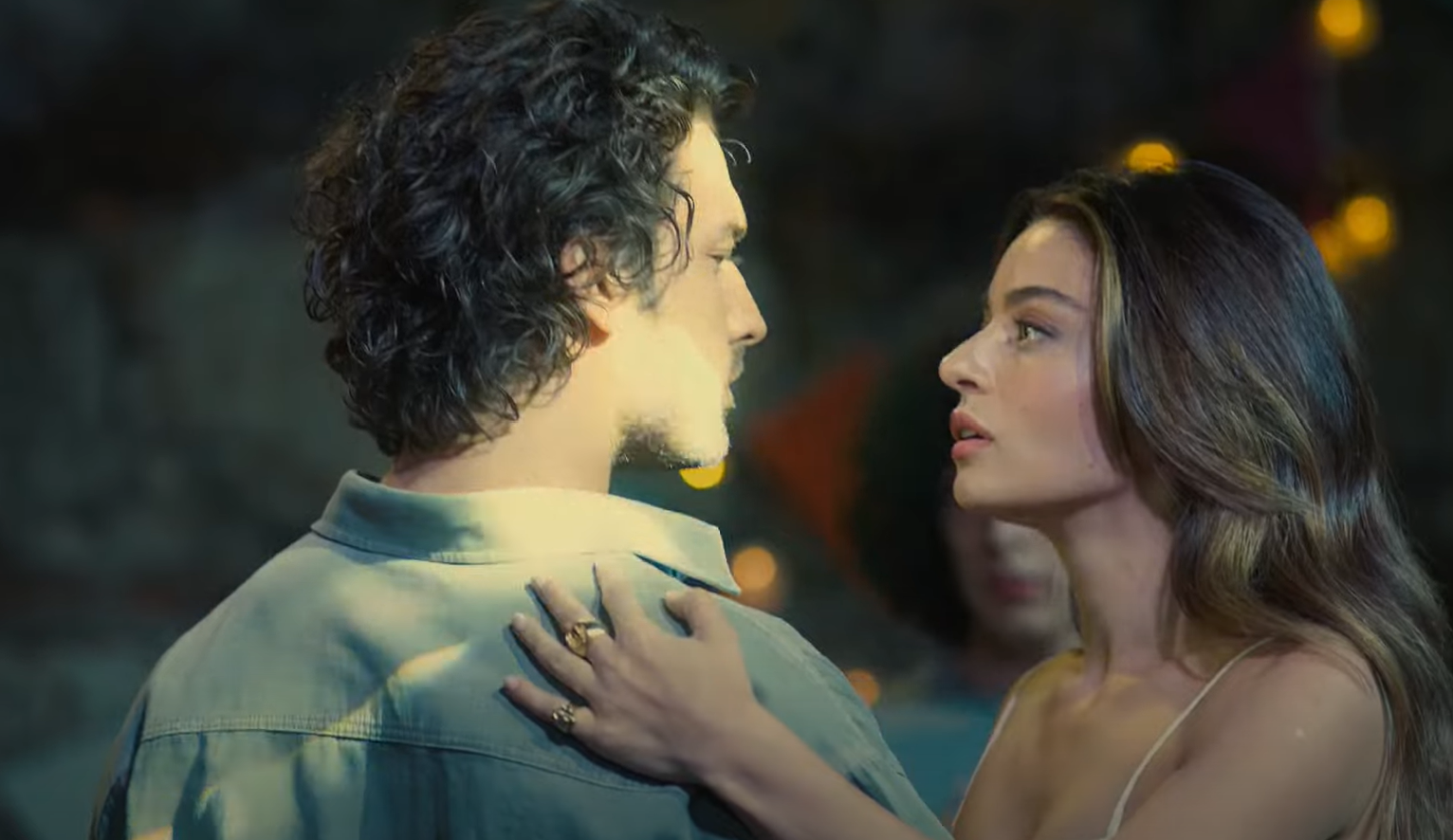 The two lead characters of our story are Haziran and Poyraz.  Haziran, played perfectly by Ayça Ayşin Turan, is a city girl who works for a company that is interested in purchasing land on Kirlangiç island to build a hotel.  She is determined to be promoted to work in their Tokyo office, so she reluctantly accepts the assignment of convincing an island landowner, Ali Ozgur (Poyraz), to sell them his land so they can build the resort.  If she succeeds, she is promised a position in Tokyo.  Poyraz, played brilliantly by Alp Navruz, is an island native who is busy taking care of his grandmother who is in a coma after suffering a brain hemorrhage.  He’s also hard at work attempting to create his own brand of olive oil but has been unable to get the perfect formula.  Due to these delays, he begins to encounter money problems from not being able to pay back a loan he borrowed for his olive oil factory.

The series premiere begins with Haziran making the trip to Kirlangiç island along with her best friend, Biricik, to try to get information to use against Ali Ozgur (Poyraz) to convince him to sell his land.  It turns out that the island is the same island where Haziran’s mother and aunt grew up.  The sisters have not spoken to each other in years due to an argument, so Haziran never visited her aunt or the island so she’s not familiar with “island life”.  While at the island, Haziran joins a group of tourists as they tour Poyraz’s olive oil factory to attempt to spy on him.  She successfully finds his accounting ledgers and discovers his money problems.  She takes photos of the information and when she attempts to leave, Poyraz finds her leading to their first face-to-face encounter.

They argue and he ultimately kicks her out and while she’s busy yelling at him, she literally runs into a mess causing her to get stuck and needs Poyraz to help her.  Haziran becomes even more upset at him for laughing and making fun of her.  Note:  Haziran does not know yet that Ali Ozgur and Poyraz are the same people.

Later, as Haziran and Biricik attempt to reach the dock to take the boat back to the city, Haziran runs into her aunt Selma.  She convinces her to spend some time with her at her house where she meets her cousin Nehir.  Eventually, they miss the last boat back into town, so they stay the night which happens to be the day the island is having a festival.

Poyraz and his friend Alper also attend the festival where they run into Idil, who is in love with Poyraz and joins them to watch the dance contest.  As the participants are announced, Poyraz and Idil are surprised to hear their names called and discover a little girl signed them up in hopes of Poyraz winning the prize money for her so she can attend summer camp.  Poyraz eventually agrees however, Idil refuses due to an injury to her foot.  When Idil tells the announcer that they can’t compete, the announcer tells Poyraz he should dance with his “girlfriend” pointing at Haziran.  Poyraz is surprised to hear that Haziran is his girlfriend and instead of contradicting him, he agrees to dance with her.  This does not make Idil happy.  At the same time, Haziran is embarrassed that the white lie she told the announcer (who she encountered at the beach earlier that day) about Poyraz being her boyfriend is revealed.  They both make the best of the situation for the sake of the little girl and end up winning the contest after dancing together for almost 7 hours.

After the contest, Poyraz shows Haziran a part of the island that has an ancient theater.  He tells Haziran the story about the theater that was built thousands of years ago in honor of a sun goddess to celebrate the love between the sun and the moon because the only time they were able to be together was during an eclipse.  Poyraz and Haziran begin to get to know each other slowly but she still does not know that Poyraz is Ali Ozgur.

The following day Haziran receives a call from her co-worker, Hakan, who tells her the information she provided about the loan will help them acquire the land.  Apparently, they shared the information with the bank who plans on demanding the money immediately from Poyraz after finding out that he does not have the assets to continue to pay for the loan.  At the same time, Poyraz receives a call from the bank demanding their money.  At that moment, Haziran realizes that Ali Ozgur and Poyraz are the same people.  She's devastated to find out the person she has been spending time with is the same person with who she just caused a lot of trouble.  As Haziran gets ready to leave the island, she stops at her aunt’s house and overhears Poyraz telling her about his situation with the bank.  He plans on speaking with the bank to try to negotiate payments and vows to find the spy who invaded his office and provided them information about his money problems.  Haziran attempts to make the best of the situation by telling him a hotel would improve tourism on their island that could benefit them all but Poyraz tells her the builders plan on building a resort, not just a hotel which including tearing down all of the olive trees that have been there for years.  Haziran slowly realizes she was deceived by her boss and Hakan.

When Haziran returns home, her mother informs her she is bankrupt because her fashion show was a failure that didn’t sell any of her designs.  Her mother decides to sell their home to pay off her debt and plans on moving into a small apartment.  Haziran is devastated but still returns to work and accuses Hakan of lying to her about Poyraz and demands to know why he described him as a mean and hateful man, but he refuses to answer.  Frustrated, Haziran asks her boss if they still plan on building a hotel, but he confirms they intend on building a resort instead.  Since he refuses to cancel their plan of taking Poyraz’s land, Haziran decides to take a two-month vacation from work.  She secretly plans on moving to the island to help Poyraz and her mother with their money problems.

After learning that her family partially owns a run-down hotel on the island (along with Poyraz), Haziran decides to rebuild the hotel so she can use the money to help Poyraz pay his loan and give money to her mother so they don’t lose their home.  When she approaches Poyraz with her idea, he refuses to go into business with her but ultimately agrees after Haziran agrees that they will make all the decisions together.

Later that evening, Nehir overhears Haziran talking to Biricik about having to work with Poyraz and her fear of her secret becoming known, referring to her working for the company that has been trying to take Poyraz’ land and being responsible for revealing his money problems.  Intent on finding out what the secret is, Nehir suggests to Haziran they go to the shore to drink tea.  Once there, she tells Haziran she overheard her conversation about a secret and asks her what it is.  When Haziran refuses to tell her, Nehir threatens to tell Poyraz that she’s hiding something.  At that moment, they see Poyraz so Nehir calls him over.  As he approaches, Haziran gets nervous, so she lies to Nehir and tells her the reason she returned was that she fell in love with Poyraz after dancing with him at the festival.  She says she returned to the island in hopes of Poyraz falling in love with her too.  Still skeptical, Nehir tells her to prove it, so Haziran kisses Poyraz to help support her lie.

I really enjoyed everything about this episode, especially the dance scene.  It was funny and the music was perfect.  I love the intense chemistry between Haziran and Poyraz as they argued while dancing for almost 7 hours.  Idil getting upset that Poyraz agreed to dance with a stranger made it better because it added drama.  I found it interesting that Poyraz, who doesn’t seem to be a very social person, knew how to dance the tango.  That was my favorite part!

Although I love Haziran’s cute outfits, I don’t think her mid-drift tops and short skorts are appropriate for a young professional in the office setting.  It doesn’t seem very realistic, but I see those types of outfits on other dizis so perhaps it’s to draw in the audience?  Another thing I didn’t like was the scene where Idil, a nurse, changes the IV on Poyraz’s grandmother WITHOUT gloves!  I understand this is a television show, but I would think that the director would try to make it a little more realistic.  Just saying.

I am absolutely loving all the beautiful scenery in this dizi.  Everything was çok güzel.  Ada Masali has all the right ingredients for a perfect summer dizi:  stunning beach scenes, great music, and a beautiful cast.  I’m pretty sure we have a new summer anthem for this year with Buray’s song “Çift Gökkuşaği”.  I can’t get enough of it.  Bravo to the producers for their awesome selection!  I also love the great chemistry between Ayça Ayşin Turan and Alp Navruz.  They seem to be having a good time with this project, so I hope it lasts the entire season.  I know it’s already making my summer more enjoyable.