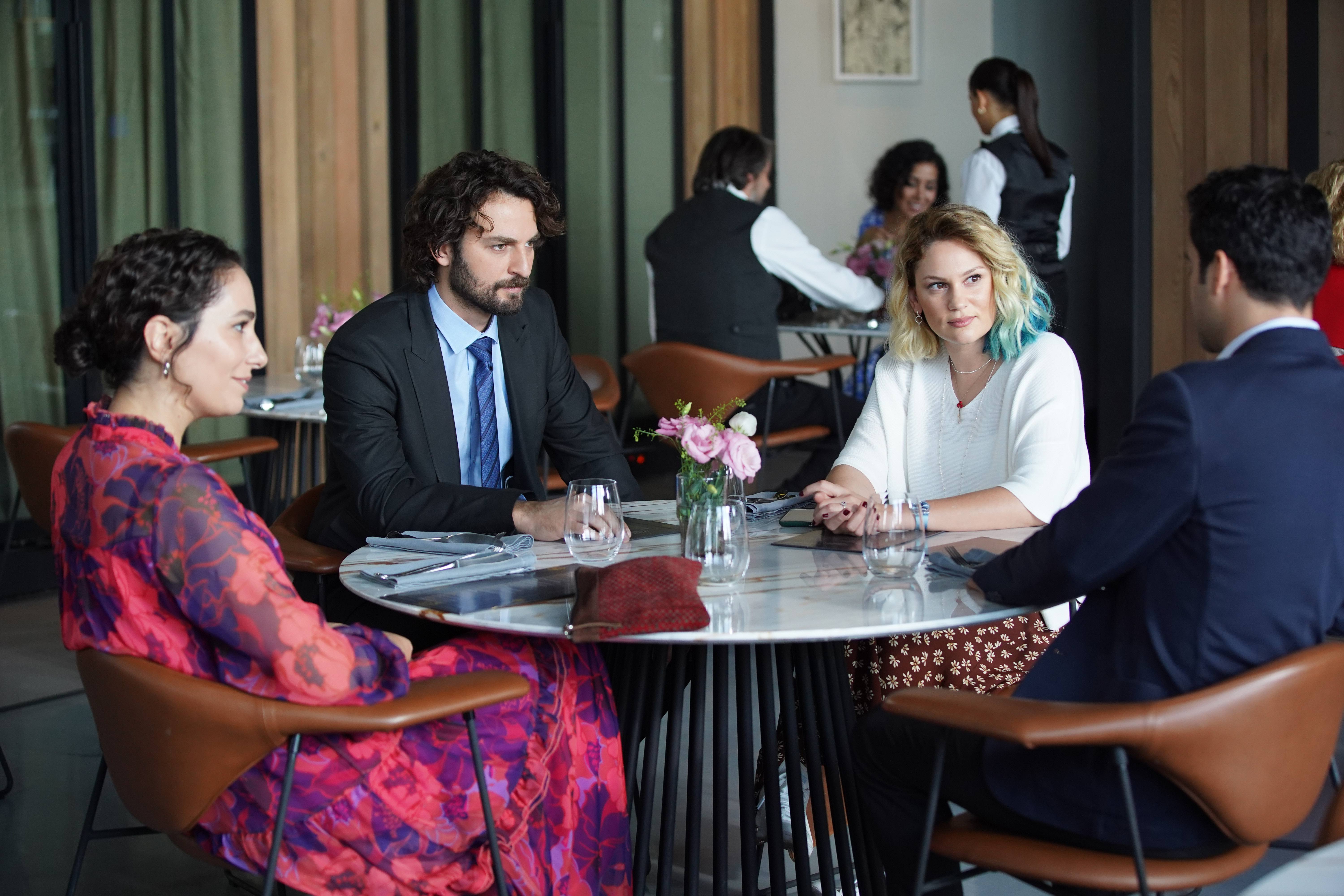 The following discussion contains spoilers from Episode 6 of Masumlar Apartmani.

Well arkadaslar, we may have to bid a heartfelt veda to the romance in this story. If Haluk Bey’s body was buried beneath the sheet in Han’s car, then the ask hikayesi may have reached the dreaded point of no return. On the other hand, if Han has only acquiesced to Haluk Bey’s blackmail and provided him with the necessary funds to remain silent about his marriage to Inci, on the condition that he remove himself from his children’s lives, there may be a path towards redemption, ahead. Han is one of the most complex characters in this dizi because we do not know how and to what extent his past traumas have affected him. Is he less affected by his mother’s abuse and father’s neglect because he is fully functional and productive in society? Or, does he seamlessly traverse the fluid line between sanity and insanity, covertly concealing his crimes? He was patient and kind to Gulben, condescending and dismissive of Esat, and cruel and aggressive towards Inci. This uncertainty is one of the most fascinating and compelling parts of this drama as we are consistently confounded at his behavior, both at his good deeds and his bad ones.

When Han last saw Inci, the word “divorce” hovered on the tip of her tongue, but she stopped short of saying it. Although Esra tells Inci that she should see Han’s desire to ‘help’ her career as positive because he only wants the best for her, Inci rightly senses that Han is not acting out of love for her, but instead is seeking to control her. Han has been so desperate for love, perhaps craving it since his bleak childhood so many years ago that his immediate response to finding Inci, is to do everything in his power to keep her beside him. So, when she questions him about why he purchased the radio station through Esat, he tells her, in the ugliest exchange that he has had with her thus far that he is acting out of love for her, but she stubbornly refuses to see the affection behind his actions because she sees all men - her father, Uygar and him - as controlling and untrustworthy. The tender moments of longing, admiration and laughter from their initial acquaintance have quickly been replaced with anger, fear and distrust. Chocolate wafers and Esra’s optimism in their relationship serve to lighten some of the darkness of Han’s actions, but this may not be sufficient (or advisable) as this story continues to unfold, especially as Inci may now suspect that Han has contributed to her father’s disappearance. Farah Zeynep Abdullah deserves special mention as she has done a marvelous job in portraying Inci as an intelligent, brave and independent woman with agency, who keeps her curiosity at the forefront of every interaction she has, gently questioning whether the people closest to her are telling her the truth. The warmth that she has on screen is refreshing, a true joy to watch.

Another bright spot in this episode is the blossoming friendship between Ege and Neriman. Not only does he make sure to buy her food for lunch to replace her sad (but clean) carrots, she also helps him by insisting that he confide in her about his reason for missing school. These small moments are equal parts heartwarming and authentic.

Although the entire cast has been exceptional, this episode belonged to Merve Dizdar’s Gulben as she resiliently overcame the terror that froze her into inaction to save Neriman from Safiye. The fact that Gulben had the courage to stand up to Safiye following the incident at the public records office, where she fell to the ground, among a large crowd of people, and was unable to stand up again, until Han came to her rescue is not only the very definition of courage, but also shows that despite all of the trauma that has befallen her, she managed to physically push Safiye away to save Neriman from harm's way. Perhaps, her innate bravery was bolstered by Han, who not only concealed her soiled clothes with his jacket when he found her at the public records office, but also explained to her with the utmost patience and kindness that loving someone was not shameful or wrong, but was actually the most natural emotion for a person to have. Han was the quintessential kahraman for her this episode.

Ezgi Mola was terrific in portraying Safiye as both a victim of abuse and as an abuser. The scene in which she scrubs Neriman was both horrific and frightening. Abuse between women is not often talked about and I’m glad that this dizi has shined a light on this issue because abuse - whether physical or emotional - is layered and multi-faceted. It can be defined by the subtle, but repetitive way in which Safiye tells Gulben that she should tell her if she loves someone, but it is better that she not love Esat because he would not love her back because of her ‘filthy’ problem, and by the more blatant physical acts that Safiye inflicts on Gulben by forcing her to bathe in scalding hot water for an hour to ensure that her ‘shameful feelings’ are cleansed from her mind and body.

A key reveal this episode is that Esra and her boss are in a secret relationship. There was some suspicion regarding their relationship, but one wonders why Esra, who has been so involved in Inci’s life, has decided not to share this information with her. What other secrets is she hiding?

The scene with the water meter did provide a brief moment of levity as the technician worriedly tells Safiye that there must be something wrong with their meter because unless they were running a hamam in their home, they were paying for too much water. A smart point to include!

The pace of this dizi has slowed down considerably as the lighthearted moments are fewer and the darkness of the traumas of the past are at the forefront, but each episode continues to reveal key details about the lives of the characters who inhabit this apartment building. The final scene is particularly telling as Hikmet Bey, whose Alzheimer’s has progressed very rapidly, invites Inci into the apartment suite as his late first wife, leaving a stunned Han, Safiye and Gulben to stare at them both in shock and horror. The mystery and suspense in this dizi is increasing, and without any expectations about what is to come, I can state with certainty that I am very much enjoying this journey and am eagerly looking forward to the next bolum.