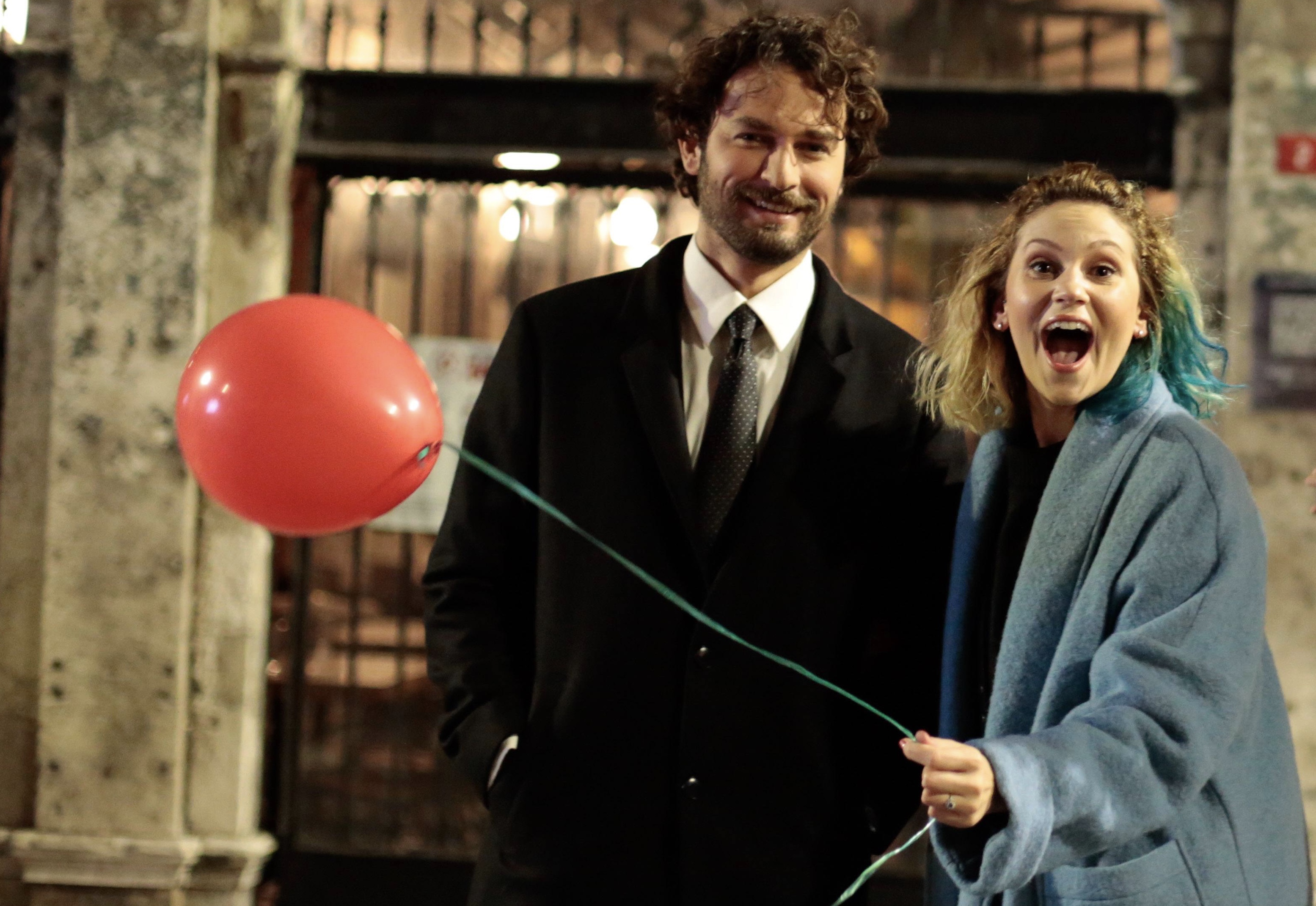 This is an episode I could watch again. Read on to learn about what happened in Episode 10 of Masumlar Apartmani. (Spoilers follow)

By opening the doors to the upstairs apartment suite, and letting Inci see the room full of garbage bags, Han freed himself from one of the burdens that was weighing so heavily upon him: his family. Of course, after revealing a distinct part of such a long held secret, Han is justifiably a bit apprehensive about what Inci may think. But, this uncertainty doesn’t last long, as Inci, runs towards him and wraps her arms around him, telling him that he is no longer alone in caring for his family; they will take on this task together. Esra warns her that she was with Uygar for two years because she thought she could help him, and that she may be attracted to Han for the same reason, but Esra’s words fall on deaf ears. Inci was so thrilled that Han finally opened up to her that she couldn’t sleep, feeling as in love with him as she did the day they first met. Although, he evades her question about why he remained ‘normal’ and is not like his sisters, and Inci does not know the extent of his interactions with Uygar, this bolum had some adorable moments between these two. Inci was brimming with joy, and Han was gentle and kind. The small moments between them, where Inci reaches for her purse, but Han is already paying the vendor, or Inci is dancing without a care, and Han is sternly advising an eager observer to delete photos of Inci from his phone, make them a couple worth rooting for. Surprisingly, by failing to appear perfect in front of her, as he has been trying to since they first met, and by sharing the weight of his burdens with her, and letting her see how lonely his life has been, he happened to her all over again* allowing them to embark on a new path together - full of happy possibility and renewed hope for the future.

Inci’s hesitation in sharing Han’s secret with Esra was superbly executed: she wanted to call Esra, immediately after seeing the upstairs suite, but then thinks better of it, and ends the call. Even at work, when she is reviewing information about hoarders, she quickly closes her browser to prevent Esra from seeing her screen, telling her friend that she can’t share the news that she has learned with her because it was about something special between Han and her. This was a very brief scene, but I am glad it was included because romantic relationships, in some ways, are very fragile and sharing a secret, even with your closest ally, can invite opinions that may allow accusation and doubt to cloud and possibly replace the love and understanding that was ever present before. Kudos to Inci for correctly discerning what news to share and what information to not disclose.

Just as Han struggled to understand the difference between a real relationship and a fictitious one, Gulben is undergoing the same struggle. But, there is no Inci beside her to help her determine the difference between fact and fiction. And, since she has been confined to her home for so long, spending all her time with Safiye and her romance novels, it is much more difficult, maybe impossible, for her to embrace reality. I thought that Esat telling her that he did not love her in the last episode would allow Gulben to embrace the pain that comes with a broken heart, and allow her to discover herself anew, but this may have been wishful thinking. When Esat apologizes to Gulben for speaking to her rudely the day before, Gulben misunderstands his statements and instead believes that he actually does love her, but it is Han, who is preventing their union. The novels that she has read, and the dreams that she has had about Esat and Esat and her prevent her from seeing the bitter truth in front of her; or, perhaps, a very small part of her feels that her dreams of Esat were quickly slipping away from her, so she doubles down on her efforts to secure him. But, try as we might to hold onto even the sweetest of dreams for just a moment longer, once our eyes open, our efforts are futile. In a series of escalating behaviors, Gulben repeatedly texts Esat, publicly accuses Esra of seducing Esat by calling into their radio station, and finally, shows up at Esat’s home. Gulben’s story has rapidly taken a bit of a dangerous turn, and I’m curious what will happen next.

Memduh Bey finds Safiye holding a candle in the doorway to the apartment building, anxiously waiting for her family to return from dinner, as a thunderstorm rages outside. He waits with her for a few moments as they both discuss how they prefer to eat home cooked meals, instead of going out to eat. Another wonderful scene between these two unlikely allies, which was made more heartwarming because nobody witnessed it. It seems as though the distrust, dislike and prejudice between these two characters is slowly fading, allowing for some respect to grow between them.

Ege offers Neriman a napkin to wipe the chocolate from her lips, but she doesn’t take it, telling him: let it stay. She feels free, for the first time in a long time, after they leave school to enjoy sandwiches, a bike ride and dessert at the seaside. It is lovely to watch their friendship grow stronger with each episode.

The most surprising development this episode was that a new teacher, who has rented a room in a hotel across from Safiye’s bedroom, has been hired at Neriman’s school. This man, has the same scar on his hand that Safiye’s young beau, who dreamed of a marriage between them, had. I was absolutely astonished at this development because I assumed that this boy had died from the collision with the bus in the flashbacks; happily, however, he is very much alive and still holds a place in Safiye’s heart. I cannot wait to see how this story unfolds. Will he inspire her to leave her apartment building? Or, perhaps he will visit her? At the very least, I hope there is a conversation between them next episode.

Since this dizi is based on true story that was written by a renowned psychologist, I expected the events to unfold with an emphasis on medical treatment or external resources to cure/help these characters overcome their individual maladies. However, I am pleasantly surprised that instead of emphasizing medical treatment, which is clearly important, the writers have highlighted the power of human relationships and how love can help people overcome a variety of problems. An inspiring thought to conclude on.

* "Each time you happen to me all over again." - Edith Wharton