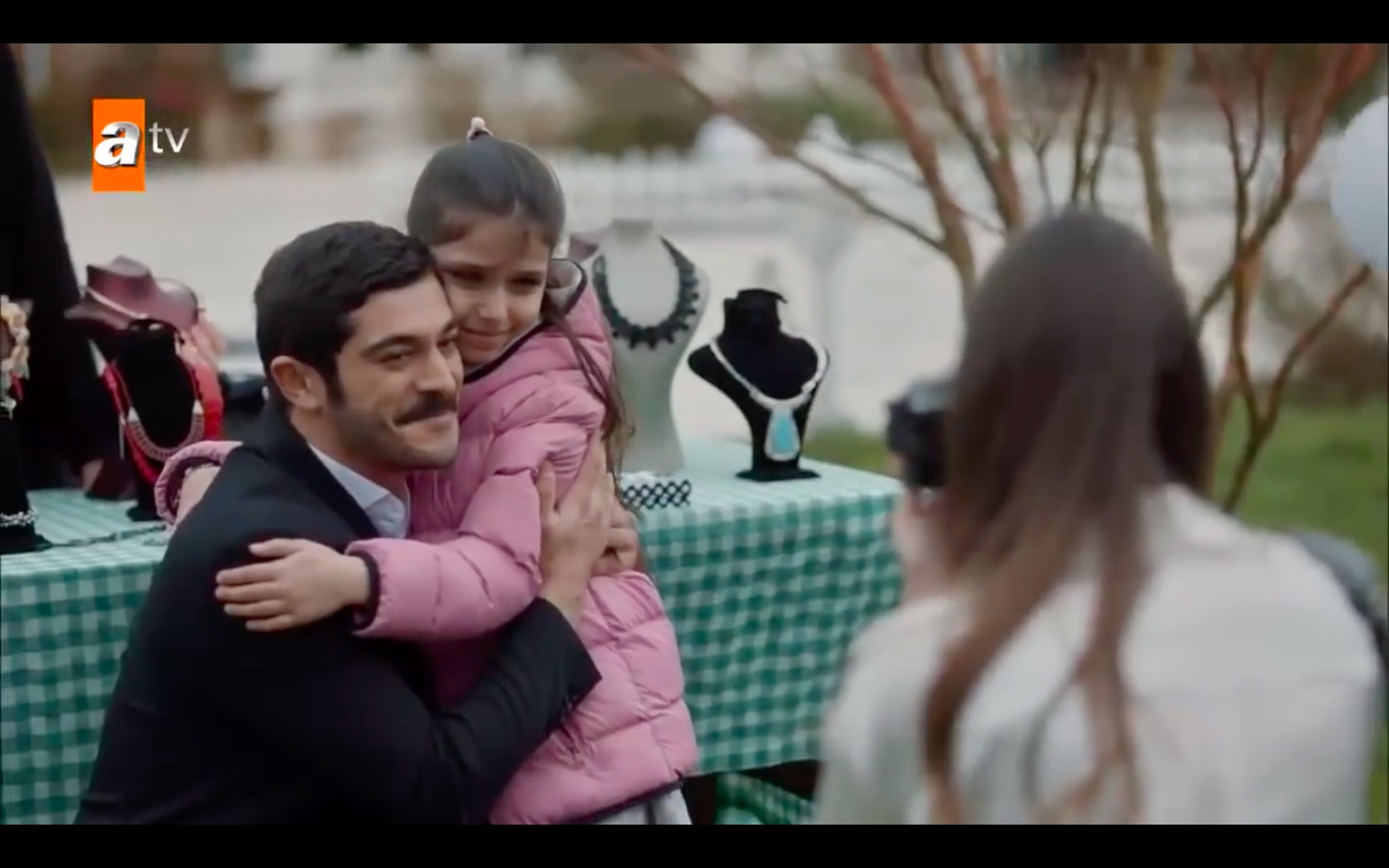 Another fantastic episode of Maraşlı this weeks with some secrets coming to light and others deepening. The main theme this week was coincidence and fates. What are the ties between the players? Was Mahur photographing Savaş and then Maraşlı saving her a situation manufactured by the Grey Room people or was it a coincidence? Was it fate?

Savaş has offered to give her mother’s videos to Mahur but then Celal will die in front of her, or she can call and warn him but he will destroy the videos. She chooses to save Celal, so Savaş destroys the memory card. However, Maraşlı is as smart as we thought he was and anticipates the trap that Savaş has laid for him, but Savaş get away and takes Mahur with him. He tries to convince her that Celal is dead.

Turns out Aziz is not an honest man, he killed his partner Omer because Mahur’s mother loved him and Aziz wanted her for himself. The videos that she has made for Mahur ultimately show this. Aziz is also willing to kill Celal.

Savaş takes Mahur to a cold storage warehouse, and calls Aziz to tell him that he must kill Celal if he wants his daughter back. Eventually Celal figures out where she is and comes to rescue her. A great line here is her saying ‘I’ve never been so happy to hear the name Bayan (lady).’

Mahur returns home but isn’t able to relax or sleep so she makes her way to Celal’s house and spends the night. She reads a bedtime story to Zeliş and sleeps in her bed with her. They make tentative plans to go to a fair that a friend of Mahur’s has organized. Celal is unsure whether Zeliş can handle it but the little girl seems excited to go and she obviously really likes Mahur.

Ozan has proven himself to be a snake and has tricked Ilhan into signing away the company.

Well, Savaş isn’t just the bad guy, he’s truly evil. He sets men at the fair in the same masks as the men who shot Zeliş were wearing. The final scene is her running away and bumping into Savaş, who removes his mask to face her and she faints as Celal is frantically searching for her.

A lot more focus on the relationship of Celal and Mahur this week and some of the nagging questions that might have remained unanswered for quite a bit longer came to light.

Aziz killed Omer, which was a surprise to no one but it seemingly wasn’t for a business issue but because he wanted Mahur’s mother, Sedef for himself. Sedef has confessed this to Mahur but she hasn’t seen that video. Celal finds it in Aziz’s safe, but he is almost caught in the process by Necati. Necati is surprisingly aware of everything going on in the house, it’s still unclear whether his alcoholism is feinted or real. The animosity between Aziz and his oldest son was apparent again in this episode, what is the history there?

Ilhan gets played and signs documents that gives controlling interest of the family company to Savaş, he is furious and devastated to learn that his friend has betrayed him. Was there an event in the past that has cause Ozan to hate Ilhan or was this just an opportunity that Ozan took advantage of, and will he also be taking Dilşad away from him? It seems like Ozan has been waiting to do this for years and therefore is the Savaş deal just a happy accident or has he been working for him for years. What does this loss of the company mean in the bigger picture.

Savaş answers to someone. We saw him go into a meeting behind some very ornate doors. What is the big picture here and what does he have against the Türel family, this is beyond Mahur taking pictures of him? The actor who portrays Savaş, Saygin Soysal is so good at the quiet menace of Savaş and with his all-black attire and open wounds he is a very effective villain. As of episode 6 we have not seen any humanity in him, he is vile and completely heartless, will we get some back story as to how he has come to be this way?

Celal is struggling, he’s having nightmares and is seemingly concerned about his growing attraction to Mahur and her’s for him. Given what we are seeing in the Grey Room flashbacks of Celal having difficulty learning his fake backstory, can’t we surmise that this is not his normal job, that he has been brought in because of his skills and his connection to the murder of the prosecutor?

The themes of fate, coincidence, and trust are playing out and we see the contrast of solid, trustworthy Maraşlı with all the liars in the Türel family. The audience of course knows that he is lying as well, however for a more noble purpose, but how will Mahur take the news when he is the only one she has trusted? The show is very good a just doling out little piece of information. We are still unaware of who knows what. Even our hero's motivations and goals are unclear and we don't yet know what he knows. This creates great suspense within the story and keeps us unbalanced and confused in the best way.

The cinematography of the series continues to be outstanding, the framing of character within their settings and also all the beautiful shots of Istanbul create a true artists view of the city and the characters.

Celal is slowing unravelling all the secrets of the Türel family. He knows now that Aziz murdered his partner and that Aziz and Omer were rivals in love with the same woman. He also knows that Ozan is dirty but not what his intentions are necessarily. He is still recording his thoughts about the family, who are these tapes for, and are they all the truth? Who is he working for and what is his end goal?

He’s worked and gained the trust of at least Mahur and Aziz, was that the plan and what does the Türel family have to do with the shooting of Zeliş? He’s still having nightmares, notable not about a stag this episode but in one he’s watching himself on television wandering around in a fog, and in the second he is chasing someone and then gets hit by a truck, a metaphor for his real life?

Mahur seems to be the stereotypical damsel in distress, there’s got to be more to her than this.  Also, why is she so naive and trusting? Is there more to her than this, can we discount her as having any nefarious intentions? It’s hard to imagine that she has anything to do with what’s going on in the bigger conspiracy but there are a lot of coincidences that surround her and she takes a lot of chances for a wholly innocent woman.

Savaş isn’t just the bad guy, he is downright evil.  His plans and end goals are still unclear as is how his business ties in with the Türel’s company. He wants to kill Maraşlı, but then decides to terrorize his daughter instead? Is this just for his own amusement or is there method to his madness?

It seems as if Aziz, Ilhan and Ozan have all shown their hands and none now seem in the running for the person in the family wanting Mahur dead, can we discount them? Does this mean we have to move on to Necati, Firuzan or Dilşad as suspects?

Necati continues to be one of the most interesting characters in the show. He is obviously in pain and doesn’t fit in with the rest of the family. He has soft spots for Mahur and Behiye the maid, and maybe Ilhan, but regards everyone else with distain. He seems to know some of the family secrets and makes very cryptic comments about Sadyk and his wife to their daughter, could he be aware of the murder of Omer?

The relationship between Celal and Mahur progressed by leaps and bounds this week and it seems unlikely that this is part of Celal original mission given the talking to he was given about love from the Grey Room people a few weeks back. However, there is an obvious attraction between Celal and Mahur, noted by Necati, Firuzan, Celal’s housekeeper, and Mahur’s friend, and she is determined to get to know him better. He is reluctant but is unable to say no to her on several occasions. It also touches his heart that Zeliş likes her so much and is comfortable with her. The scene where he was observing them reading together in Zeliş’ bed was very sweet and he had tears in his eyes over the connection his detached daughter has with Mahur.

The visit with his armed forces friends was awkward at first but Mahur has the ability to mesh in with anyone it seems and she had a good time drinking and listening to the singing. She had her camera with her and took a lot of pictures of Celal and he even smiled at her. She had forced him to take her with him but he enjoys her company and he definitely feels a pull towards her.

The music in the show continues to be excellent and the lament that Celal’s friend sang, Telli Turnam by Musa Eroğlu, was perfect for the scene.

A strong as the attraction and the bond between Celal and Mahur is how can a romance between them work and won’t it just blow up when she finds out that he’s been lying to her? She asks him about his childhood and we see, in a flashback, the Grey Room people prepping him to answer that question. How much of what Celal told Mahur is true? Now that they are getting closer will he start to tell her of his real life?

Less one liners this week but still some funny moments, mostly coming from Necati and Maraşlı.

There are obviously more secrets to come in Maraşlı, including the details of the murder of Omer. The crazy theory this week is that, lots of people are theorizing that Savaş is Omer’s son, it would explain his desire to go after the Türel family, but what if Necati is also his son and has teamed up with his half-brother Savaş? Sedef said that Aziz murdered Omer so that he could marry her instead, what if she was already pregnant with Necati when the murder took place? Would explain why Aziz was willing to leave him in a burning car to save Ilhan instead.