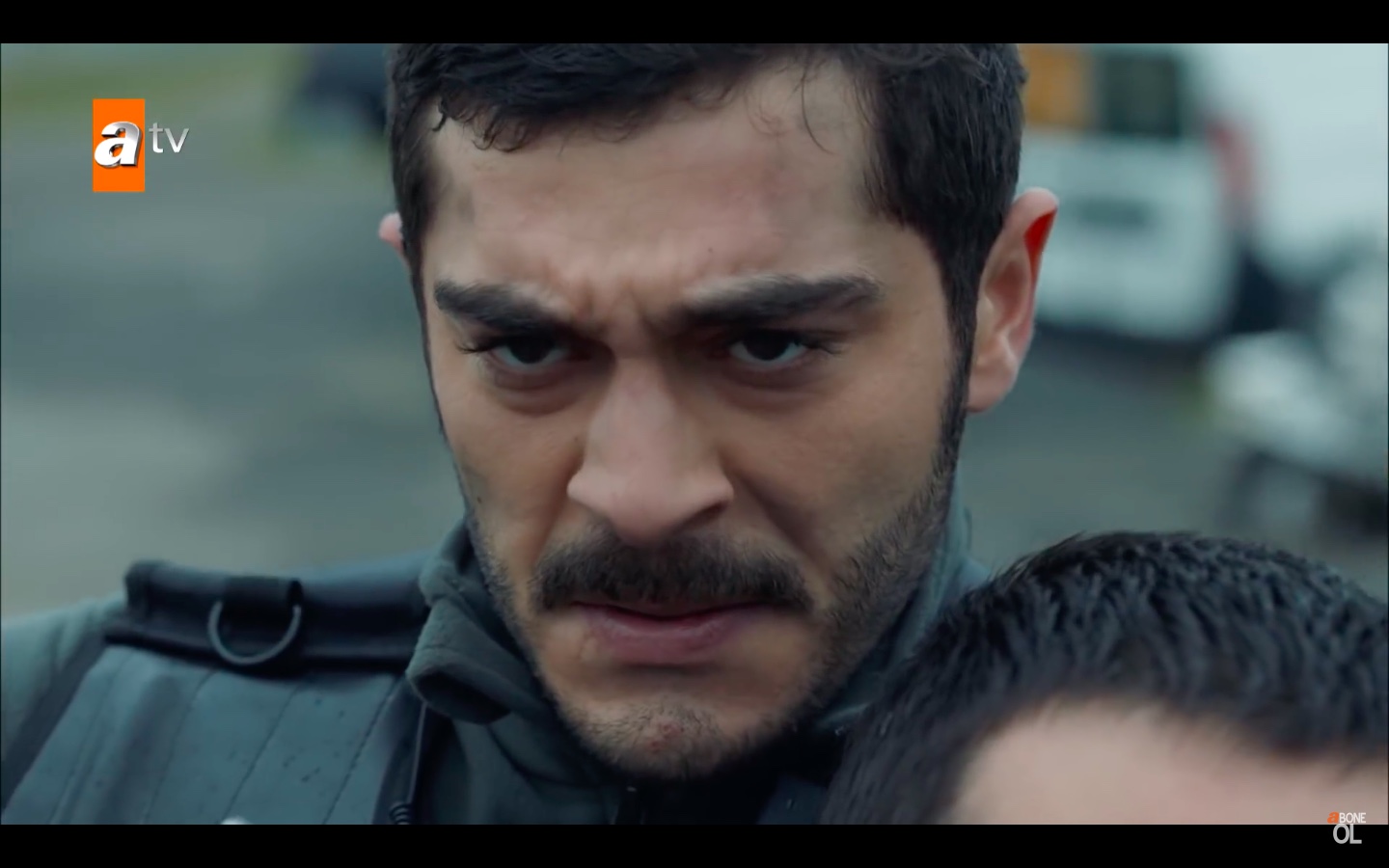 Celal manages to overcome the odds and get the jump on Sami and his men and they take off. He gets Mahur to the hospital and she’s in bad shape having lost a lot of blood. He is beside himself with worry. He doesn’t have his phone but the hospital calls the Türel’s and they converge on the hospital.

Aziz is worried and takes his anger out on Celal and makes him promise to stay away from Mahur. Mahur pulls through the surgery to remove the bullet, which hadn’t hit any major organ so she will recover. Aziz meets with Savaş and tells him to kill him if he must but to leave Mahur and the rest of his family alone. Savaş tells him that it wasn’t him who attacked Mahur’s studio but rather someone who was trying to kill Maraşlı.

Celal goes to see Mahur before embarking on his hunt for Sami and she asks him not to take revenge on her behalf. He tells her that he must, kisses her hand, and leaves his notebook with her. Savaş also talks to Celal and demands that he should not kill Sami, Celal declines to listen to Savaş. The intelligence agent, who finally gets a name, Hilal, also demands that he not go after Sami but Celal tells her that he is a volcano, and that volcano is now ready to erupt and there isn’t anything that he can do about it. She tells him that if he chooses to do this she can’t protect him and he tells her that it doesn’t matter, he has to do this.

When Celal gets home his house is sprayed with gunfire, scaring Zeliş. They both are fine, and he takes her to the housekeeper’s house for safekeeping. He goes in search of Sami and starts with Sami’s father Acar. He kills all of Acar’s security and ultimately Acar himself but not before he has given up the person who is hiding Sami in one of his hotels. Nevzat finds this person, but Sami has already left. Savaş has spirited him away to a wrecked car depot.

Nevzat insists that he will help Celal take his revenge, Celal at first tells him no, but relents as he does need help. They dig up a cache of weapons that Celal had hidden and Nevzat has procured some bulletproof vest and other gear for them too. Celal drives into the depot and Nevzat takes up a sniper position on a ridge above. Savaş has brought a small army of men with him to protect Sami. It doesn’t help as Celal and Nevzat systematically take out all the henchmen but a few.

At the end of the confrontation Celal has Sami in a headlock with a gun to his head, Savaş tells him that he can’t kill Sami as Savaş needs him for business and if he does kill him he will kill Celal. Celal hesitates but does shoot Sami in the head. He escapes with the help of Nevzat’s sharpshooter skills and the final scene is Celal at the hospital seeing Mahur taking her first walk down the corridor.

The Plot and The Players

A more action-packed episode this week on Maraşlı and we got to see just what revenge and retribution look like when you hurt someone that Celal loves. We also learned a little bit more about the end game of Necati and Savaş. As predicted they are not just out to avenge their father they are looking to be big players in the Turkish drug market although Savaş seems more interested in this than Necati does. Necati hears about Mahur’s shooting and immediately thinks that it’s Savaş who has done it. He seems to be genuinely concerned about his sister. Savaş tells him that it wasn’t him because Necati told him not to touch Mahur. It will be interesting to see how this plays out. Necati is still a bit of an enigma, is he a completely cold-hearted sociopath or does he harbour some feelings of love, at least for Mahur?

Aziz is desperately worried about Mahur and is willing to give up his own life to protect her. He has no idea yet of the situation his family is in and the state of the family company. He will have several more heart attacks when he is finally privy to all the machinations of his children.

Ilhan continues to go off the rails and has made secret plans to leave the country with his son. He’s leaving behind Dilşad and escaping by boat. Necati has guessed his intentions and has seemingly reported him to the police, but this part is unclear because we don’t know if it is Özan that Necati was talking about when he said, ’I want to report a murder’. The police do show up to question Ilhan but it could be a misdirect.

Celal’s only goal in this episode is to kill Sami and he doesn’t care who he has to go through to get to him. The body count was very high this week. He is distraught at Mahur’s state and the fact that it is his fault that she was caught in the crossfire. It is her injury, even more than Zeliş’ trauma that was his driving motivation for this episode. He is caught between the mission that he is on for the intelligence agency and his personal principles and cultural traditions. Given his upbringing and military service, he cannot let Sami get away with harming Mahur, who is innocent in this.

The Savaş character has taken a backseat in the narrative after the reveal of Necati as the Türel family betrayer and it’s too bad. He is now serving as his brother’s right-hand and not a strong protagonist on his own. Coupled with the introduction of Bayram, the overseas connection to the drug smuggling arriving on seen it may mean that Savaş has less of a role going forward.

My Theories and Analysis

A more engaging episode this week, the initial episodes of the series were so engaging because of the mysteries surrounding the shooting of Zeliş, the killing of the man in the warehouse (witnessed by Mahur), and the role Maraşlı had to play in everything that is happening. The story has now become one of two brothers out to avenge their father and a father out to avenge the pain of his loved ones. The show at first seemed like it was going to be something more esoteric than a story of revenge but revenge is eternal and a popular plot of many shows and movies. However, that’s not to say that the show isn’t still great to watch, I’ve just had to adjust my expectations of what kind of plot Maraşlı was going to have.

Celal is determined to kill Sami and leaves a trail of bodies in his quest to find him. He has another vision of a stag in the hospital and instead of being afraid of it he seems resigned. It seems as if he is no longer fighting the image of the stag, but has decided to follow that path. What does the stag represent? His inner rage and fierceness that he has been trying to submerge? He will not allow anything or anyone to get in his way, not even Mahur or the intelligence agent Hilal who threatens to have him arrested.

I do love that Savaş has a particular playbook when it comes to dealing with people, and intimidation is one of his main tools. However, it doesn’t work on Celal at all. He shoots up Celal’s house to get him to back down from his plan to go after Sami and also tried to get him to not shoot Sami in the head by threatening him but none of the pressure Savaş uses on Celal works like it would with other people and we can see that Savaş is flummoxed by that. It’s an interesting character trait in a hero that even threatening his child won’t make him back down, it’s a level of stubborn ruthlessness that will likely lead to someone dying.

We again saw different layers to Necati this week, he genuinely seemed worried about Mahur and seems closest to her than anyone else in the family, but can this love save her from his revenge plans? He seems to have no remorse in turning in Ilhan, although I don’t think he told the police that Ilhan killed Özan, he needs Ilhan around for the rest of his plans and won’t want him to go to prison too early.

Not a lot of interaction between Mahur and Celal this week, but it’s clearer now why their romance figured so prominently in the last few episodes, it’s to make their separation more painful for both of them. He gave her his notebook containing, I assume, his own writing. He is a man of many talents, and the poem she reads is beautiful. Celal is likely going to choose to stay away from her for her safety and if she has figured out that he has killed a couple of dozen people to avenge her she may not want to see him either.

This week was a showcase for the acting talent of Burak Deniz, he gave us all the layers of a man steeped in traditions, both those of the region where he was born and raised but also the military traditions that he maintains. But we also saw a man and father desperate to keep the people he loves safe, and a man in love when he shouldn’t be. These are all interesting beats for an actor to play especially all in one episode.

I’m glad the Celal has a true friend in Nevzat and that that character had more to do and say this week. The story that he told Celal that didn’t seem to have any point was very funny as was Celal’s reaction.

It seems like we are in the thick of the main part of the story as people’s motivations are all on the table. There are still several secrets that we as the audience are privy to that some of the characters are unaware of but given the speed at which the Maraşlı writers are revealing the plot it may not be too long before Aziz knows about Necati and what happened to his company, Mahur will find out who Celal is and how he came into her life, and Celal will come to learn about all the parties involved in the attack that traumatized Zeliş.

The series is doing well in the ratings, and will likely be renewed for another season and I am curious whether they will try and carry on this original story into another season or whether we will have new mysteries and new missions for Maraşlı.