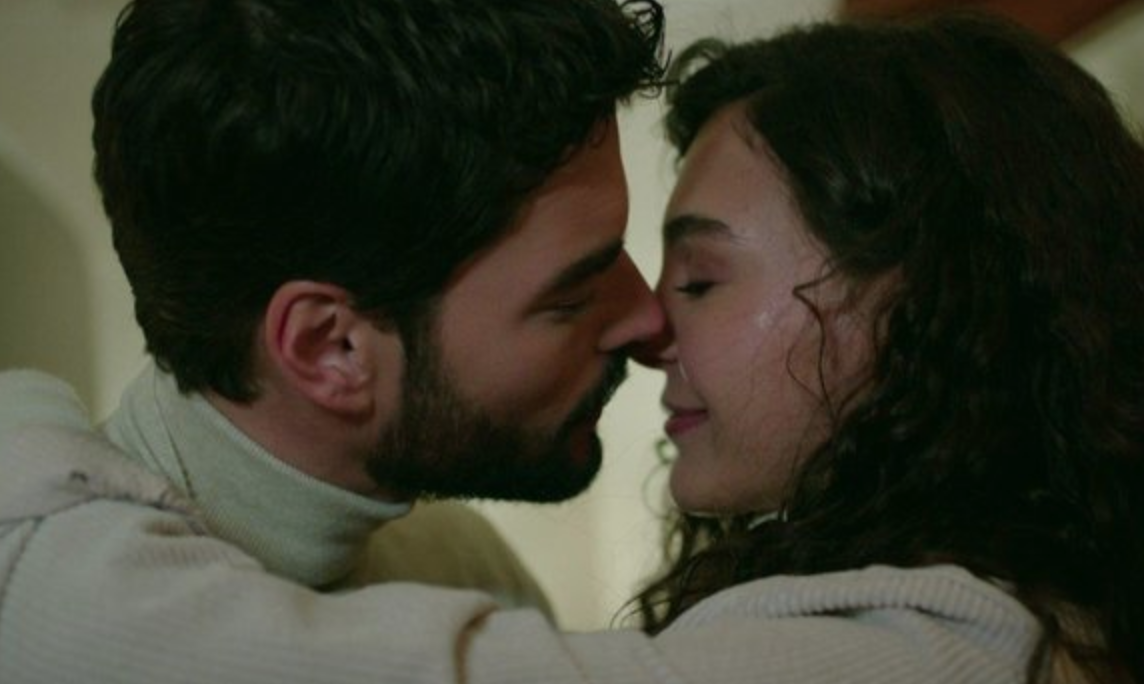 Hercai returned after a two week hiatus to an impatient audience in anticipation of revelations.  Well, before you get too excited, we didn't get any revelations... but we did get an interesting couple of clues.  It seems that this episode served as a transition episode helping to set the groundwork for some furture unveilings.  And judging from the trailer for the next episode we will see just that.

At the end of the previous episode we found the Aslanbey clan gathered once again in the Shadoglu mansion in a face to face confrontation about Elif's whereabouts.  This episode begins with Elif and Azat walking through the gates of the Aslanbey mansion with marriage certificate in hand.  To everyone's surprise Azat declares his union with Elif.  It turns out that the two have agreed to marry in order to stop the bloodfeud between the families. Reactions vary from shock to joy, but be it as it may, the two are legally married.

Nasuh proud of the fact that they have beaten Azize at her game, announces a big wedding at the Shadoglu farmhouse.  He taunts Azize who cleverly goads Miran into going after Elif.  Miran sneaks into the Shadoglu mansion and attempts to take Elif back, but to no avail.  Elif tells Azize that she will only come back to the Aslanbey mansion if Azize gives up her revenge.  In a brilliantly acted scene, Azize recounts the night of Dilshah and Mehmet's (her son) death in gruesome detail in front of the Shadoglus and tells Elif that she can never give up on her revenge.  Having failed in their endeavor to stop the bloodfeud, Azat and Elif set off to the farmhouse to decide whether they will continue their marriage. Azat who is developing tender feelings for Elif does not want to put her in a difficult situation and asks Reyyan to serve as intermediary between them.  Reyyan and Miran go to the farmhouse and after loud arguments, mostly between Azat and Miran, and a comical scene in the kitchen, again between Azat and Miran, their conversation is cut short as the mansion is consumed in flames.

Meanwhile, Azize has realized that Elif's marriage will never be consummated, and that she is in no danger of being dishonored.  Comfortable with this belief, she decides to make Nasuh pay for his audacity. She decides to burn the farmhouse down before the wedding takes place. In the final scenes of the episode, Azize sets the farmhouse on fire not knowing that Elif and the others are also there.

Those were the events in the episode.  Now onto some highlights and analysis.

This episode highlighted Miran's precarious mental and emotional state.  Having just found out that Azize kept the existence of his grandmother from him, and having just discovered his mother's past, Miran's emotions are raw and he is disoriented.  One gets the feeling that Miran is a walking timebomb, ready to explode or implode at any moment.  Akin Akinozu brilliantly portrays a Miran who is one step away from emotional collapse. On the one hand he is influenced by Azize's words about Elif, about his parents, about the Shadoglus and on the other hand he is influenced by Reyyan's logical refutations of Azize's lies.  Every word uttered by Azize is rebutted immediately by Reyyan.  Miran bounces from revenge to guilt at an alarming rate.  It's a wonder he hasn't imploded yet!

I'm waiting for the day that Miran will actually get his act together and use the brain we all know he has.  Hopefully, the writers will see it in their hearts to save the poor man from this dizzying ping pong effect.  At times I worry for Akin, the actor, who must go through tremendous emotional turmoil to act out these scenes.  At one point in the episode after Azize has described his parents dead bloody bodies and torn clothes, Miran screams and pounds his fist on the stone wall of the Shadoglu mansion. All the while, Zehra who holds the single most important document that can stop everything stands looking with an annoying look on her face. In the scene immediately after, Hazar runs after Miran to tell him he did not kill his mother..  Miran fights back uncontrollable rage.  He screams at Hazar that he can never believe a word he ever says because of the lie he told about his fall.  Miran tells Hazar the only reason he hasn't killed him yet is because of Reyyan.  I don't believe that Miran is capable of killing anyone, but in his unhinged state anything is possible, especially since everyone in Midyat seems to walk around with a loaded weapon.

All of these confusions aside, Miran is still marinating in the guilt of what he did to Reyyan.  In one scene he tells Reyyan that he understands now very well what his actions did not just to Reyyan, but also to her family.  He blames himself for everything that is happening to their families and to Elif.  He is in such despair and helplessness about his past actions that it is difficult to see how he will ever get out.  It is difficult for any of us to see because I'm sure all of us have been engulfed in darkness and despair at some point in our lives. But the writers have a message for us.

In the midst of all this madness, a beautiful memory comes to Miran.  He sees a street vender with a children's carousel walking by and tells Reyyan of his childhood with Elif, Gonul and Firat riding such a carousel. Reyyan recreates that scene for him with Gul.

In another beautiful scene after they have learned about Elif and Azat's marriage, Miran tells Reyyan that he is worried that Elif will be hurt.  He knows that Azat doesn't love her even though she loves him.  He tells Reyyan that whenever they take steps towards building their life and being happy, something happens that holds them back.  He laments that they can't live like a normal couple, for example, they have only ever danced together once. Reyyan tells him they don't have to delay their lives because of what life throws at them.  She says "Alright, so life steals from us, so what? We'll steal some beautiful days from her too."  And that is perhaps the most salient message of this episode.  Life is all around us, and there is much we can't control.  But we have to make our own happiness.  Reyyan puts on beautiful music and the two lovers dance in the quiet of their room.

While Reyyan and Miran struggle to create moments of happiness in the midst of calamity, we learn a bit more about what drives Azize.  In a deeply emotional scene with Azize, her burn scars in full display, we learn that she has lost four of her loved ones and has been separated from her lover.  From past episodes we know she has lost three sons, but apparently there is a fourth loss as well.  Whatever the reason for her vengeance, Azize feels justified.  And for the first time ever in this series, Azize mentions a lover... one she was separated from.

In this regard we can perhaps take some clues from a flashback scene between a young Nasuh and Ayse, the young woman he loved and whom he lost in the fire so many years ago. In this flashback, Nasuh tells Ayse that they will have a beautiful wedding in the most beautiful place.  And Ayse tells him that she would like the wedding at the farm where they met each other, because the farm is the most beautiful place for her. In this scene, young Nasuh has white beads in his hands similar to the beads that Azize carries with her wherever she goes.

The young woman, Ayse, has a dark mole above her lip just as Azize does.  Could young Ayse be Azize?

All the clues in this episode point to Azize and Ayse being the same person, but as with all Turkish dizis it is still too early to be sure.  Whatever the cause of her losses and regardless of the pain she has been through there can be no justification for ruining the lives of innocent people and tormenting young children as she has.  We know that she has lost three sons, but we also know that none of them were killed by the Shadoglus so they cannot be included in the four people she blames the Shadoglus for.  Could these four be the four people the Yusuf spoke to Reyyan about in Episode 18?

So many questions and yet so few answers.  We are well into the second season.  Our lovers have finally found each other and they are trying to build a life.  We have several pieces of evidence in different hands, and we still know nothing about why all these events were set into motion.  Fortunately however, the trailer for the next episode hints at some possible revelations.

The jeweler's son comes to visit the Aslanbeys and Zehra tells Azize she knows Miran's paternity.  Whether either of these will lead to any revelations is unclear, but at least it's on the minds of the writers.  Eventually it will make it to the screen. Meanwhile, I'll continue to ponder the clues we have so far to see if I can beat the writers at their game.