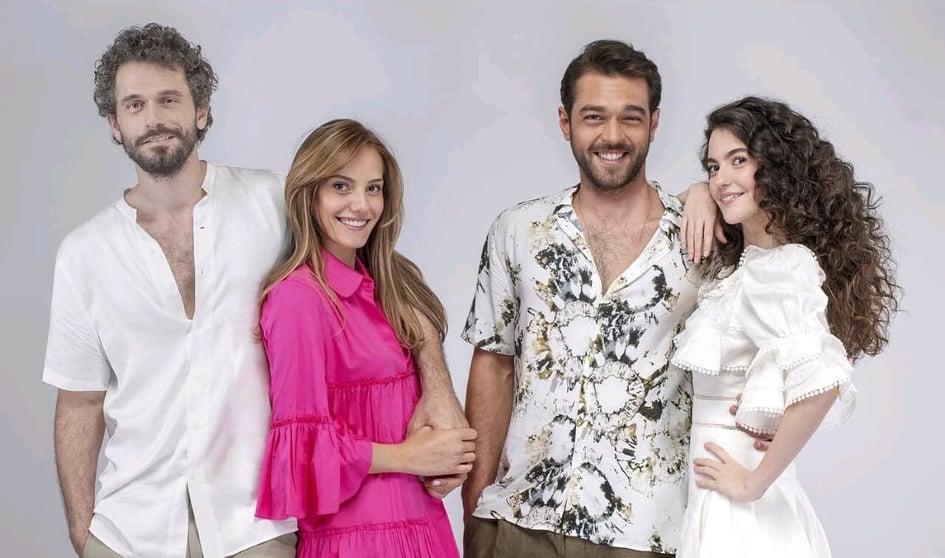 by Paola Cesarini and Tazeen Siddique

The last three episodes of "Çatı Katı Aşk" surprised viewers with remarkable role reversals, unforeseen evolutions in several characters' storyline, and meaningful references to a rather complicated past.

Our review begins with the aftermath of Ayşen’s shocking decision at the end of episode 5 to marry Ömer despite her family’s obvious disapproval and Ateş’s inevitable heartbreak. Her stubbornness notwithstanding, Ateş still believes that -- deep down -- Ayşen reciprocates his feelings and wants to trust him. From the girl's perspective, however, his ongoing deceptions vis-á-vis the Yılmaz family still provide insurmountable obstacles to their relationship. When his arguments fail to convince Ayşen of Ömer's unsuitability, Ateş resorts to a rather spectacular -- and rather unexpected -- kiss, with which he hopes to persuade her of the futility of ever marrying another man.

The splendid kiss and Ateş's innumerable romantic efforts to woo Ayşen into confessing her love are impressive, but still regrettably in vain. What eventually induces Ayşen's to start changing her mind about Ateş is the latter's steady evolution from a rich and carefree enfant terrible into a responsible and altruistic adult, who is ready and able to do what it takes to become the man Ayşen hopes for. Upon hearing Celal's conversation with Emin about the debts, which they and many in the mahalle owe, Ateş swallows his ego and accepts the job of a co-pilot in a car race, so that he can help those, whom Ayşen loves. This is a turning point for Ateş. He finally understands that Ayşen will give their love a chance, only when her mind will be free of concern for her family and the neighborhood.

Differently put, Ateş comes to realize that, for love to win, it is useless to pressure Ayşen into confessing her true feelings. What is required, instead, is considerable self-sacrifice. Thus, after an emotional conversation with Ayşen, Ateş decides to comply with her repeated requests to leave her alone. The scene of Ateş walking away from Ayşen, with the latter unable to speak the words necessary to stop him, seems to put the final nail in the coffin of their love. Sevda and Yasemin's catfight, however, brings Ateş back, just when all hope appears lost. Following Sevda's injury, we finally get to see him put his medical training to use. There is really no reason why Ateş should continue to conceal the fact that he is a Doctor, especially since practicing his profession would likely bring him much needed income -- not to mention prestige vis-á-vis the mahalle, the Yılmaz family, and Ayşen.

In episode 8, Ateş appears is determined to keep his distance from Ayşen. A new reality that soon drives her insane. When Ateş’s lady Doctor friend enters the scene, jealousy ensues and -- in quite an unexpected role reversal -- we witness Ayşen pursue Ateş with repeated calls, messages, and a late-night visit to the auto shop while he is working on his racecar. It is during this visit that Ateş fully perceives Ayşen's inner turmoil and, in turn, devises a clever and thoughtful stratagem to get her talking. He suggests that they both pretend to call their "best friends" to share what is going on. He thus gets the opportunity to explain that he is confused about her continuously changing attitude towards him. In turn, she confesses that she would like very much to trust Ateş because she is sincerely interested in him. The pretend game thus establishes, for the first time, an authentic and satisfactory communication flow between Ateş and Ayşen. To top it all off, Ateş reveals that the best friend he thought of calling is actually Ayşen -- the only person, who is constantly in his thoughts.

Demir and Yasemin's relationship is progressing too, although at a much slower pace. Demir's deliberate flirting with Sevda obtains the desired result of making Yasemin jealous. It is at this point that Demir openly questions Yasemin’s interest in his relationship with Sevda and reveals that he is fully aware that her marriage to Ateş is fake. At the same time, we can see Demir finally starting to make romantic overtures towards Yasemin, especially during and after the shopping spree in episode 8. Their relationship still lacks the drama or the chemistry of Ateş and Ayşen's. At the same time, it was great to see Demir and Yasemin stop bickering and start enjoying each other's company like mature and responsible grown-ups, who are sincerely interested in each other.

It is by now fully clear that Emin and Gülriz's unfortunate youth romance was thwarted by lies and deceit, but that strong feelings still linger between the two. The series has yet much to reveal about what really happened, including Asaf's role in their separation. A revival of Gülriz and Emin's romance is, however, still improbable unless the latter finally takes his own advice to Ateş -- namely that only trust can open the doors to a woman’s heart. At the same time, Gülriz might indeed be too snobbish and spoiled ever to suit Emin. While perhaps unintentionally, she continues to look down on the Yılmaz family and the mahalle where Ateş is instead finding himself. In short, she still has a lot of soul searching to do, before she will be in a position fully to deserve the love of a wonderful man such as Emin.

The episodes under review beautifully portray the genuine affection that the members of the extended Yılmaz family have for each other. The scene where Celal questions Perihan about their parenthood and wonders if there is something amiss in their nurturing of Ayşen is very moving. Also, Celal and Emin are increasingly taking shape as benevolent patriarchs, who keep the family together through unconditional love and limitless wisdom. By now, Yasemin and Ateş constitute fully accepted members of the Yılmaz family. Indeed, what Asaf could never predict (and what will likely be his undoing,) is that one day fate would bring Ateş to develop a meaningful father-son-like relationship with Emin, who is very likely his biological father. When Ateş calls the antique shopkeeper “Emin Baba,” it definitely makes us hope that such a bond will soon come true in reality.

As in the past, there were several moments of comic relief in the last three episodes. Ateş and Yasemin’s attempts to foil Ömer and Sevda’s devious plans towards Ayşen and Demir provide entertaining interludes. One of the most gratifying scenes, however, is when the police take Asaf Avci away for questioning on tax fraud, and Celal gratefully acknowledges Allah for his intervention. Şuayip also experiences his heroic moment, when he gets the social media "influencer" Özge to advertise the family's newly created shopping website on her platforms and, in turn, attract an army of new customers to the mahalle. Finally, following Sevda’s discovery of Ateş and Yasemin's fake marriage certificate and her subsequent aphasia-causing concussion, Ateş, Ayşen, Demir, and Yasemin actively collaborate to hide the accident from the rest of the family and eliminate the threat -- often with comical results. Amidst all the chaos, it was lovely to see these wonderful young people finally enjoying themselves and dancing in celebration of the opening of Yasemin's café.

With the advent of the fall dizi season, "Çatı Katı Aşk" is moving to Saturday nights, Hopefully, this change will allow the series to reach a natural conclusion. In addition to the developing relationships between Ateş and Ayşen, and Demir and Yasemin, we still have to find out what exactly happened between Emin and Gülriz so many years prior.  Moreover, the series still needs time to unveil the identity and purpose of the mystery woman who is making repeated visits to the mahalle during episode 8, and who may well be Aysen's biological mother looking for her lost child.

Episode 6-8 of "Çatı Katı Aşk" were the best since the pilot. Not only did they offer substantial plot and character development on many fronts, but they also introduced new and interesting twists in the series. There were finally real sparks between Ateş and Ayşen, while Demir and Yasemin's relationship positively evolved from bittersweet bickering to endearing repartee.  Emin and Celal's wisdom was impressively juxtaposed to Asaf's cruelty, and even Babanne seems to have stopped creating havoc. We very much hope that in the next few episodes, the show will build on the momentum recently created.  Viewers are indeed eager to witness more interesting narrative turns and, at the same time, enjoy "Çatı Katı Aşk's" excellent acting and clever humor.