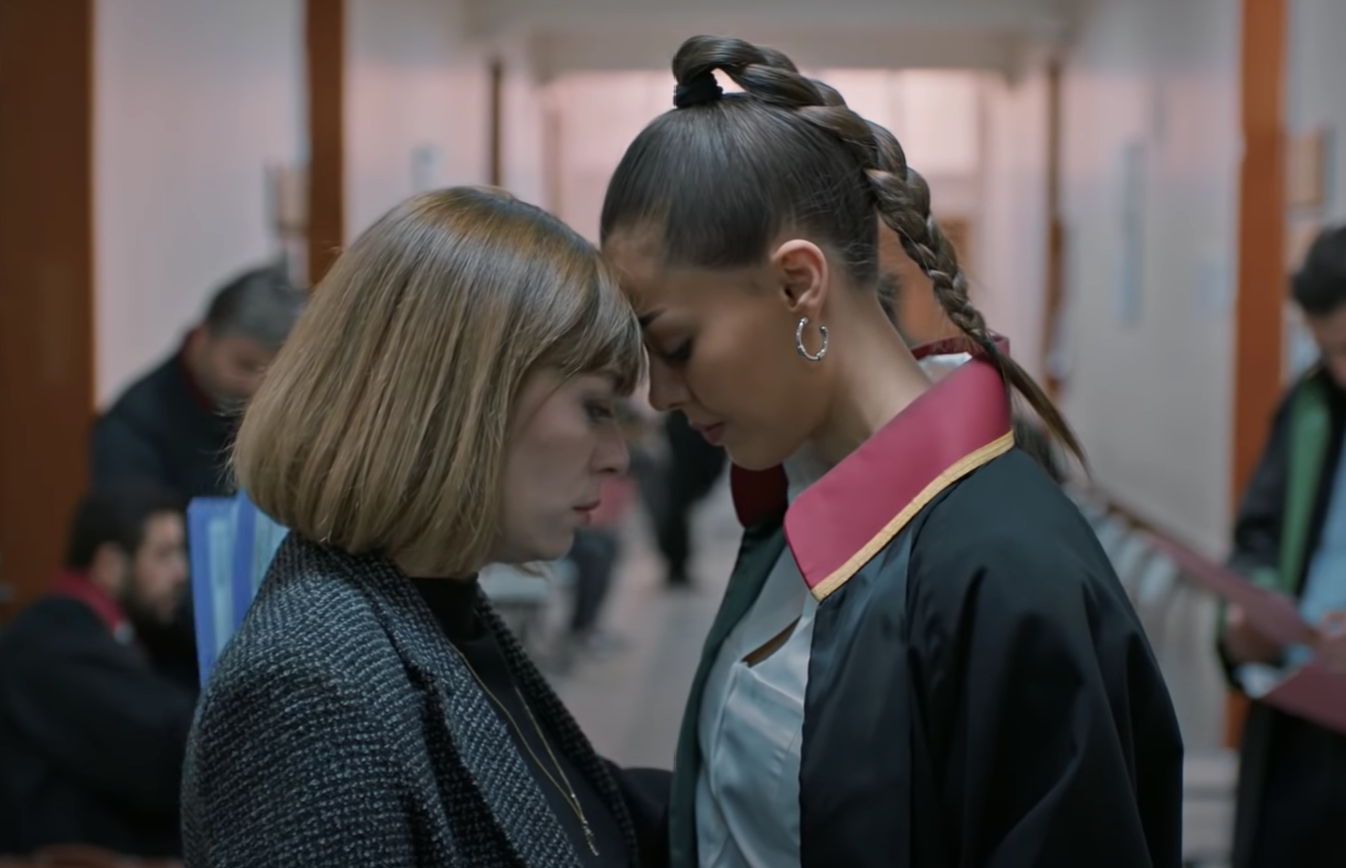 After Çelebi makes the announcement of his birth origins, Iskender accuses him of lying for the sake of the election, but Çelebi confirms it’s not a lie.  When Iskender demands to know why he kept the truth from him for so long and made him hear about it along with the entire world instead of telling him in private.  Çelebi continues to play the victim and tells him he couldn’t admit it to himself let alone to anyone else.  He takes advantage of Iskender’s vulnerability and tells Iskender he doesn’t have anything since he’s the only real Kayabeyli.  Iskender promises that nothing will change because he will always be his brother.  Çelebi tells Iskender he has to leave to see his daughter so Iskender tells him Jemre found Gunesh and took her.

Çelebi arrives at Jemre’s house early in the morning and as soon as Jemre opens the door, he rushes in attempting to take Gunesh, however, Jemre stops him and yells at him that he isn’t taking her.  In a fit of rage, Çelebi pushes Jemre and attacks her.  As he strangles her and attempts to hit her, Gunesh yells at him to stop.

Çelebi realizes what he’s doing in front of his daughter and tries to apologize but she’s too scared to let him near her.  When Çelebi attempts to take her home, Gunesh refuses and tells him she prefers to stay with Jemre.  He agrees to leave her but threatens Jemre to take good care of her while they wait for the custody hearing.

Ruya and Ömer arrive after Çelebi leaves and notice Jemre is not doing good, so Ömer takes Gunesh to look for her cat who escaped.  Jemre tells Ruya she felt like her nightmare had returned along with the feeling of defenselessness she always felt with Çelebi.  As Ruya comforts her, she receives a call from Çiçek who tells her that Çelebi admitted to being the baby that was thrown away years ago in the trash.

Later, Çelebi's mother asks him if it was necessary for him to reveal his past to the press, Çelebi tells her it was required so he could get out of the mess he was in and to help him with the election.  When she asks how Iskender took the news, Çelebi tells her he was overly emotional like always.

The next day, Iskender questions his mother and demands to know why she never told him the truth about Çelebi.  She refuses to answer at first but after he pressures her for answers, she explains that she had a difficult time getting pregnant when she first got married so they adopted.  She says she never intended on telling him because she didn’t want Çelebi to be treated differently.

Çelebi finally gets a visit from the election chairman who informs him the committee has changed their decision and has their full support for the election.  However, Çelebi doesn’t accept their offer because he claims they treated him unfairly and they only changed their decision after the news release.  Çelebi continues to play the victim and tells the chairman he’s refusing the nomination because he doesn’t want anyone to think he made the announcement so he could win the election.

In his plan against Ömer, Iskender goes to his neighborhood and asks him if he knows what condition his mother is in since he likes to help random women who need help.  The topic about his mom stuns Ömer who stays quiet, so Iskender tells him when he’s ready to know more about her they can talk.  Çiçek notices their confrontation and tells Ruya, so they both go to check to see what’s happening.  Ömer is too upset to answer Ruya when she asks him what happened, so when she pushes him with questions, he tells her to leave him alone.  Çiçek yells at Iskender for telling Çelebi that Jemre took Gunesh, so Iskender tells her he did it because she told the press about his past.  Çiçek tells him it’s a lie and he needs to realize that Çelebi is abusing his trust to betray him and will eventually leave him with nothing.  She tells him Çelebi is not capable of loving anyone and assures him Jemre is not responsible for the news release but encourages him to investigate who did so he can open his eyes and see that Çelebi is just using him.

Ozan checks on Ömer who tells him Iskender has been investigating his past and got information about his mother so he’s going to teach him a lesson, so he leaves his family out of their feud.  Ömer asks Uzun to gather the neighborhood boys to meet at his store because he has a job for them.  They begin to follow Iskender and find out about Arzu, so Ömer and Ozan check to see who she is.

Iskender investigates Çelebi's story and finds out he was the person who gave the information to the journalist at the newspaper.  Iskender is so upset that he goes home to confront Çelebi, however, he overhears a conversation between Çelebi and his mother.  She tells him that he is her favorite and even though she gave birth to Iskender, he doesn’t have the strong characteristics that Çelebi has.  Iskender surprises them and calls him a fake Kayabeyli who is ambitious and greedy and nothing but trash.  He leaves to his friend’s house, Arzu, to tell her he’s done letting people take advantage of him and decided to put everyone in their place, beginning with Çelebi.  He plans on removing him as head of the family business so he can finally take over.  He begins by talking to some of his employees, who have been unhappy with Çelebi's management, and proposes his plan so they can help provide proof of the illegal deals Çelebi has been making.

Çelebi and Jemre’s custody hearing date arrives, and the court determines they need to evaluate their homes as well as speak with Gunesh so they can make the decision.  Çelebi tells Jemre she has no chances of winning after they see the condition of her house which causes her to worry, however, Ruya tells her they have time to make some improvements to their little home.

Ozan and the construction workers continue with their strike against his uncle.  When his uncle demands that they leave his site, Ozan tells him they are not leaving until they get paid what is owed to them.  As his uncle walks away, he receives a call from Çelebi who tells him he’s willing to help him with his problem which he accepts.

Çiçek visits Ali in prison who suggests they get married as soon as possible since he’s not going to be getting out anytime soon so Çiçek agrees.  As she leaves, she encounters Iskender outside waiting for her who tells her she was right about Çelebi and informs her he is planning on destroying him, and asks her to help him.  He wants her to help him with Gunesh so she’s taken away from him which will completely destroy and devastate him.  He warns her if she agrees, no one can know about their collaboration.  When Çiçek has doubts, Iskender tells her he’s willing to drop the charges against Ali if she agrees so she does.  At that moment, Iskender receives a call from Ömer who tells him they need to meet and sends him his location, which turns out to be Arzu’s residence.  Iskender freaks out and attempts to get into her car but his arm begins to tremble uncontrollably so Cicek offers to drive him.  Once they arrive, he rushes into Arzu’s house to check if she’s okay.  When she asks what’s going on, Iskender tells her to lock the door as he goes outside to look for Ömer.  He finds him down the street and they have another confrontation.

Ömer warns him that he can respond to his threats just like he did but the problem is between the two of them, so he tells Iskender to leave their loved ones alone.  He threatens that if he doesn't leave his mother and sister out of their conflict or horrible things are going to happen to him.  After Iskender returns to Arzu’s house, he tells her he’s going to hurt everyone that hurts him.

The following day, Jemre and Ruya are on their way to court to get the custody decision however when they stop by Ömer's store, they interrupt his conversation with Ozan about Çiçek.  When Ruya asks what the problem is, Ozan takes Jemre to court so Ruya and Ömer can speak in private.  Once they’re alone, Ömer tells Ruya he saw Çiçek with Iskender driving his car and they didn’t look like they were enemies but instead looked like they were friends.  At the same time, Iskender arrives at Çelebi's house and demands that he step down from their company and hands him a folder that contains all his illegal business deals that contain his signature that will make it very hard for him to deny.  Çelebi tries to tell him he’s doing the wrong thing, so Iskender tells him he’s just taking what he’s entitled to.  Jemre and Ozan arrive at the court and receive the great news that the court has awarded her temporary custody of Gunesh!

I love that Ömer put Iskender in his place but didn’t stoop down to his level.  Ömer has honor and principals but Iskender definitely knows what buttons to push to get him to lose control.  I feel like Ömer can do a lot of damage if he’s pushed to that level so Iskender better watch his back.

I love how Ozan and Jemre continue to get close.  She’s slowly realizing what a fantastic man he is especially after what he did for Gunesh when he bought her furniture and didn’t stop looking for her cat when it got lost.

I love that we finally got more background about Jemre’s boss, Ms. Hanim, even though it’s incomplete.  Apparently, she had a daughter, Bahar, who died when she was young but unsure of the reasons.  When she visits her gravesite, Ms. Hanim tells her that it’s almost time for her to join her as she looks at a bullet.

I love how Gunesh comforts Jemre just as much as Jemre comforts her even though she’s a child.  Unfortunately, she’s witnessed the violence between her parents and is aware of their situation, so for her to support her mom when she needs it is so mature.

I think it’s long overdue for Jemre to take self-defense classes so she can start defending herself against Çelebi.  She has suffered too long at the hands of a maniac and now that she’s no longer hindered by the drugs that he was giving her, she should start protecting herself and Gunesh.  She needs to show him that he can’t harm her anymore, either physically or mentally, because she is no longer the scared defenseless woman she once was.