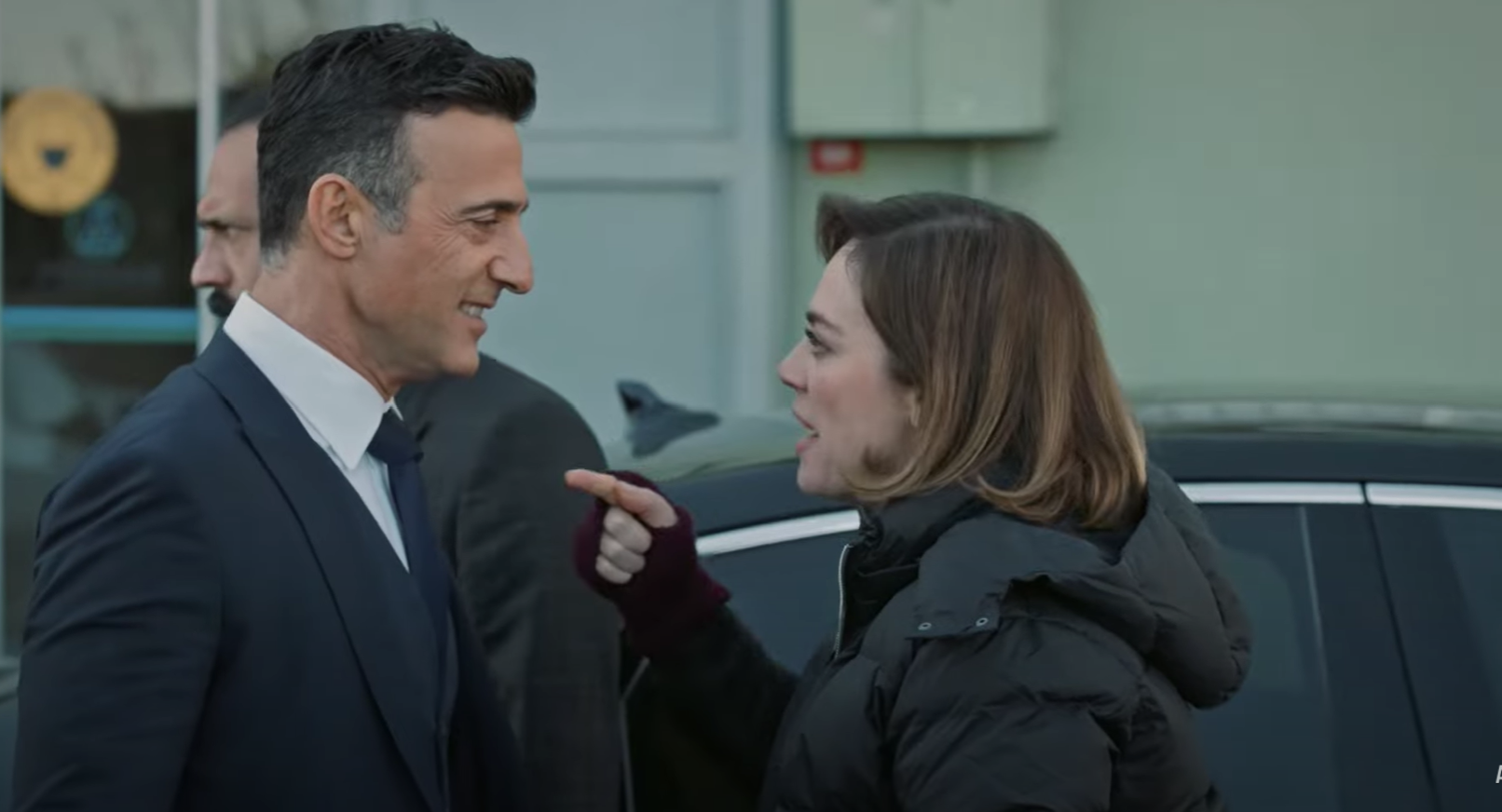 Once Çelebi is released from the police after being questioned for the assault charge filed against him, he looks for Cemre to confront her for what she did.  He threatens to ruin her work, her new home, and her new life if she doesn’t return to their home and includes keeping Gunesh away from her for as long as he wants.  Cemre attempts to report Çelebi for kidnapping, however, the police tell her it’s not considered kidnapping since he’s the father.  When she tries to explain that he took her away and won’t tell her where she is, they still refuse to help her, so they take her into custody when she makes a scene of the injustice.

Later, Çelebi orders his employees to find any information they can about Simge, the woman who filed charges against him so he can threaten her to rescind her testimony.  Iskender also asks Adnan to investigate Ömer's past so he can get his revenge on him as well.  Eventually, Çelebi locates Simge and gives her two options, she either continues to live her life like before or becomes his enemy.

Ozan notices the construction site is still not up to code with the safety precautions he requested and finds out his uncle is ignoring his requests.  Ozan orders the workers to stop working until the site is safe no matter how long it takes.  Eventually, his uncle arrives and demands to know why he shut down his construction site, Ozan explains they won’t work until all safety precautions have been taken care of.  When his uncle refuses, Ozan warns him that he will report him to the authorities that could potentially close his site permanently and ruin him.

Atlas continues to refuse to eat since Tomris forbid Iskender to visit him.  Çiçek asks Tomris to make an exception for Atlas’ sake otherwise he will pay the price.  Ultimately, Tomris agrees so Çiçek calls Iskender and asks him to visit Atlas.  Once he arrives, Tomris attempts to make him feel guilty for Shimal’s death, however, he tells her that she’s committed a few crimes herself for Atlas who she’s using as a replacement for not showing Shimal any love or attention when she was alive.  After watching Iskender play with Atlas, she asks him how he can act as nothing happened, so he tells her he’s going to be the ruthless person everyone thinks he is.

Bulant makes another desperate attempt to extract money from Tomris as his deadline to pay off his gambling debt is getting close.  He calls Tomris to meet with him who agrees, however she presents him with an offer.  She will give him $2 million dollars in exchange for custody of Atlas.  Bulant reluctantly signs the paper and leaves.  However, as he walks out of the restaurant, he’s followed by a man who appears to have been hired by Tomris.

Cemre, along with Ruya, goes to Çelebi's office and demands to know where he has Gunes.  They take along the police and a social worker to help them prove that he kidnapped her.  However, Çelebi willingly gives Cemre the address of their house in the forest where he claims Gunesh wanted to visit.  When they arrive, the housekeeper informs them that Gunesh and her grandmother just left and are headed back to their original house.  The police tell Cemre they can’t do anything else for her and leave.  Cemre becomes desperate knowing that Çelebi will continue to play this game and torture her using Gunesh against her and make her feel like she can’t win against him no matter what she does.

Later, Çelebi receives disappointing news from the election committee who request him to withdraw his candidacy for mayor, however, Çelebi asks if they can postpone their final decision until after they watch the news.  At that moment, there is a last-minute press conference with Simge making an announcement that she has withdrawn her testimony against Çelebi explaining that she was being influenced by other people and didn’t know she was being used as a trap against Çelebi.  When the election chairman informs him the committee already made a decision, Çelebi asks if they can reconsider after the news update.

The following day, Iskender is excited to finally take over as director after Çelebi promised him he was stepping down however when he enters the board meeting, he finds Çelebi already conducting the meeting.  Iskender is surprised and when he asks him what he’s doing, Çelebi ignores him and continues with the meeting.  Afterward, Çelebi tells Iskender he was testing his self-control before he lets him run their company and accuses him of acting like a child and losing control every time he doesn’t get what he wants.  Iskender is extremely angry and humiliated, so in retaliation, he calls Çiçek and tells her where they can find Gunesh.  When she asks why he’s helping her, he tells her he wants to see how his brother shows his self-control.

Ozan arrives at the construction site after hearing that the workers have all returned to work without any safety precautions.  As he’s trying to find out why the orders haven’t been fulfilled, they hear screaming and find a worker who has suffered an accident who fell from the building.  After they take him to the hospital, they’re told he has a spine injury but will survive.  The injured worker’s son accuses Ozan of not doing what he promised and not caring just like his uncle.  An infuriated Ozan tells them his father also died because of his uncle and now he’s working with him because he has to and not because he wants to.

After Çelebi receives the final decision from the election committee who decided they will not continue with their support as their candidate and request his withdrawal from the election, he puts a new plan into play.  To get sympathy from the community, he leaks the story that he was the baby that was left in a trash can 40 years ago, and during the press conference, instead of the reporters asking him about the charges filed against him, they ask if the article is true.  Çelebi pretends to be surprised that the information was made public, but he confirms the information is true and gives a sad story about not knowing what his real name is or who his real family is, or if he was loved before being thrown away.  Ultimately, his strategy works because when he walks away from the press, half of the reporters are crying after hearing his story.

Meanwhile, Cemre arrives at Çelebi's farmhouse where he locates Gunesh and takes her.  Cemre explains to Gunesh that she knows she doesn’t like her new house but it’s all she has until she can afford something better.  She tells her if she wants to spend time with her, then she’ll have to make an effort so they can be together.  Although Gunesh is still scared, she agrees to stay with Cemre because she doesn’t like to be separated.

I love that Ömer is always helping someone.  After helping the neighborhood lady who had an accident with buying her food and spending time with her, he also helps Ozan by talking to his journalism teacher who thinks he betrayed him to make money versus reporting the truth.  He finally convinces the teacher to speak with Ozan who is having a hard time working for his uncle who he hates.

I also love the bromance between Ömer and Ozan.  They are so adorable especially the scene when Ömer is waiting for Ozan after work because he’s feeling neglected.  Ömer tells Ozan he’s mad at him because he doesn’t call him, visit him or drink tea with him anymore.  Ozan realizes his friend’s feelings are hurt so he takes him to dinner.

I hated Çelebi's mother for telling Gunes that Cemre doesn’t miss her as much as she does after Gunesh confesses that she misses her mom and feels bad for yelling at her the last time they saw each other.  She should not be poising an innocent child’s mind with lies that can cause long-term effects down the road.

I hated that Simge fell victim to Çelebi again.  Not only did this woman suffer a beating by him, but he also threatened her with becoming her enemy if she didn’t withdraw her testimony.  Çelebi has no limits.

Questions That Need To Be Answered:

Cemre’s boss had a panic attack after she told her Çelebi kidnapped her daughter.  Is that an indication that she experienced a kidnapping in her past?  When will we learn more about this complex woman?

What will Iskender do with the information after he locates Ömer's mother and sister?  Will he use it against him?  Will he locate them and attempt to bring them together just to get Ömer's reaction?

Did Tomris hire someone to harm Bulant?

I thought that Çelebi using his past to try to get sympathy and attempt to continue his candidacy for mayor was genius.  He’s a conniving and calculating character that never seems to fail.  I look forward to next week’s episode after he realizes that Cemre has Gunes.  I enjoyed the beginning of the episode when the ladies were all celebrating their success even though it was short.  Seeing them all happy and smiling was a treat.

The meeting of Çelebi and Simge was a bit more deep than his threat that she will become his enemy. He promised her to become Filiz again, that is to leave her life as Simge, the prostitute, and give her daughter a better life. He puts a sock on her daughter's leg and tells Simge about the child who was left in the trash, saying that it stole from that child all that was good in him. I think his visit there was the first time I saw a spark of humanity in him, and did not totally hate him.

I guess I didn't think he offered to help her return to her previous life in that manner since he's so evil. I thought he meant he would just leave her alone if she agreed to take back her testimony. Great observation and thank you for the comment.