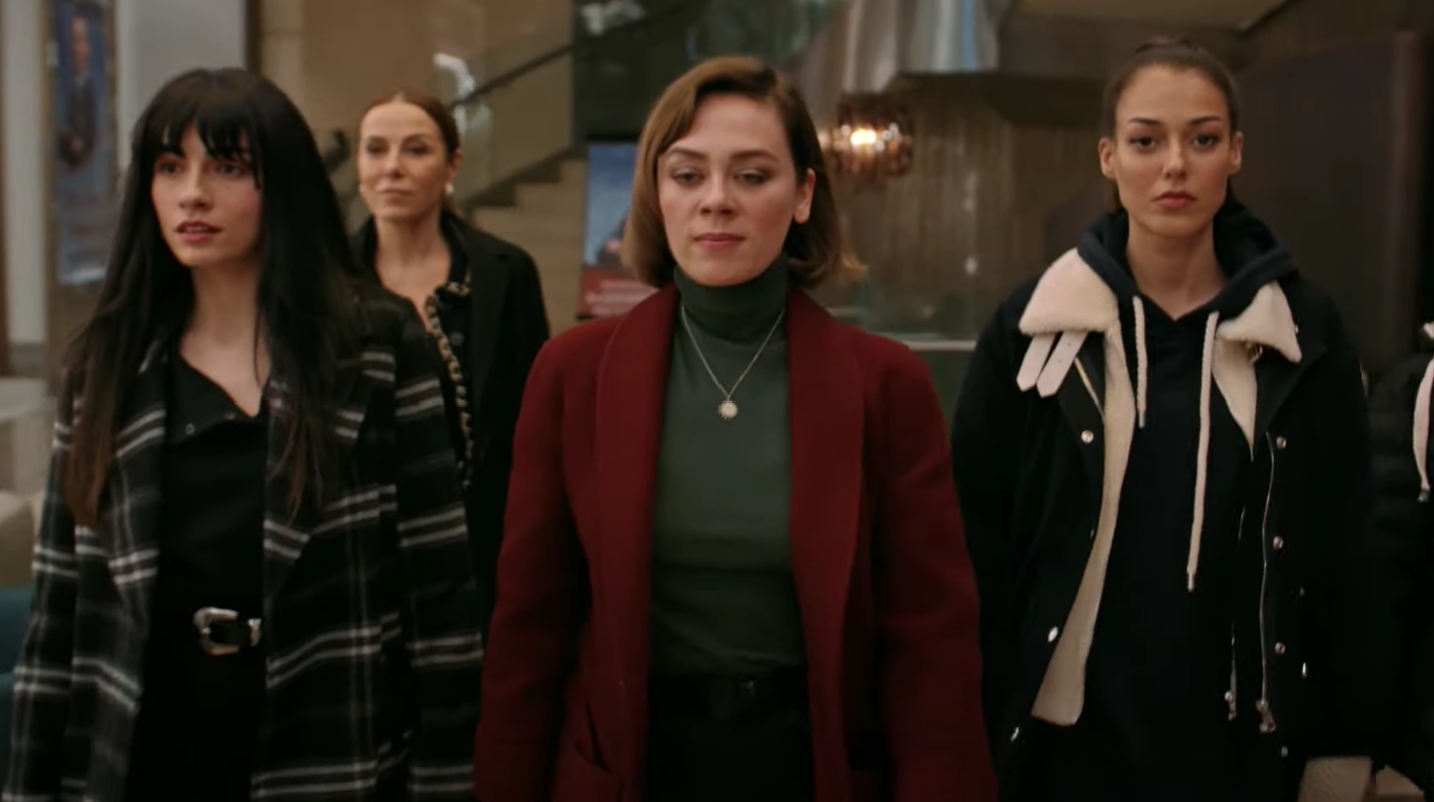 Rüya is devastated after losing her father and refuses to eat or get out of bed causing her friends to worry, especially Ömer.  When he mentions his concerns to Ozan, he suggests he share his past with Rüya so she can relate to his situation and possibly help her see that she can get through this hard time in her life.  Ömer decides to follow his suggestion and asks Rüya to spend the day with him so he can share his past with her to help her deal with her situation.

Çelebi decides to run for mayor again, however, his supporters remind him that he needs to have a strong family to help him win the election.  Çelebi lies and informs them the issues with Jemre have been resolved and everything is back to normal.  He’s depending on his new plan to get Jemre back by using Gunesh as his pawn.

Jemre finds out Çelebi has sent Gunesh out of town with his mother and refuses to tell her where she is.  As she tries to figure out how to locate her, Çelebi shows up unexpectedly at her work with a new proposal.  He warns her he can send Gunesh away whenever he wants and there is nothing she can do about it, so he proposes a new agreement, a bilateral divorce protocol.  It involves postponing their divorce hearing until after his election, once he’s elected, he will re-open the divorce proceeding himself and will expedite the divorce without any further delays.  He warns her if she doesn’t agree, then she will face years and years of waiting during which time he will keep Gunesh away from her.

After Kenan’s death, Iskender decides to stay with a friend after his confrontation with Çelebi.  She tries to convince him to stop blaming himself but is unsuccessful.  She suggests he talk to Rüya but Iskender refuses because she won’t listen to him however he calls Çiçek who agrees to see him.  When they meet, she slaps him and accuses him of lying to her.  He explains how he tried to save and protect Kenan but ultimately he failed.  Çiçek warns Iskender she’s telling Rüya that she helped him find Kenan but  Iskender cautions her that Rüya won’t forgive her so she’ll be losing her as a friend when she needs her the most.  When Çiçek says she’s going to the police, Iskender tells her Çelebi knows how to cover his tracks so nothing comes back to him.

Ömer takes Rüya to his hometown and shows her the house he grew up in.  He opens up about his childhood including how his dad died when he was 9 years old which prompted him to start working to help support his mom and sister.  Later, when he was 12, he says he woke up one morning and realized he was abandoned by his mother.  He says he cried for hours until he got hungry, then came to the realization that he has to keep living to survive the life he was dealt.  He refused to go into details about his mother and sister, instead, he takes Rüya to a hilltop that overlooks his town where he went the day he was abandoned.  He says it was there that helped him understand he doesn’t need much to live and still continues to live like that.

When Ömer takes Rüya home, she promises to try to start living again but asks Ömer how long it will take for the pain to stop hurting.  Ömer tells her she’ll start living again but won’t forget her pain and hands her a bag of marbles that helped him deal with the pain.  After Ömer leaves, Rüya finds Çiçek waiting for her to make sure she’s okay.  Rüya tells her she’s one of the few people that she truly trusts and appreciates all the support she’s given her the last few weeks. Çiçek realizes she can’t tell Rüya about Iskender to avoid hurting her or even losing her friendship.

Later, the ladies get together to check on Rüya, including Tomris and Jemre’s boss.  Tomris makes a homemade tea and while preparing it, she asks Jemre about the protocol Çelebi proposed to her.  She says she hasn’t decided if she’s going to accept or not because she’s still struggling with the fear of losing Gunesh.  Tomris tells her Celebi continues to make her feel weak and fear him to get what he wants.  She explains how she didn’t come to the realization of not fearing life until late in life so she encourages them to take ownership of their lives now and continue to be the strong woman they can be.

The following morning, Jemre has a dream that Gunesh tells her she doesn’t love her anymore because she left her with her father, and she doesn’t see her anymore.  She wakes up suddenly and realizes she fell asleep outside while painting when Ozan finds her.  While talking, Çelebi shows up and has a confrontation with Ozan because he doesn’t like that they’re getting close.  After Ozan leaves, Çelebi gives her a bag and tells her she must accompany him as his wife when he announces his candidacy for mayor.  When she refuses, he reminds her of the protocol and threatens her with Gunesh.  When Rüya notices Çelebi is outside, she accuses him of killing her father and they both throw him out.

Jemre and Rüya pursue the investigation to find something to use against Çelebi during his event, so they call Tomris, Ömer, and Çiçek and meet with Ozan’s journalist teacher to get his help with researching Çelebi's association with a baby that was thrown in the trash.  While checking, Rüya discovers an article of a baby who was found in the trash the same year Çelebi was born, so they determine that he was the baby that was found instead of him throwing away a baby like they originally believed.  They reach out to the police investigator who doesn’t find any official records related to an adoption or a child put in a shelter during that timeframe which they conclude Çelebi could have deleted the records.  They determine not to use that information further since it deals with an innocent baby and they refuse to stoop down to Çelebi's level.

The evening of Çelebi's mayor announcement arrives and Jemre attends making Çelebi think she agreed to play the part of a loving wife.  However, the minute before they’re scheduled to walk on stage, Jemre tells Çelebi she’s declining the protocol and rips it in front of his face.  She refuses to appear on stage with him and warns him she will do everything in her power to make him lose the election.  Once he begins to make his acceptance speech, Rüya, Tomris, Çiçek, and Jemre’s boss interrupt the event and reveal that their candidate is not who they think he is.  They discovered a woman who Çelebi beat a few months ago and present a copy of the police report as proof.

I loved how Tomris gave the girls a lesson about fear and encouraged them to live.  She told them that their enemies should be afraid, not them.  She admits to committing minor crimes and mistakes in the past but she never lost hope.  I also love that Jemre is finally seeing Ozan in a different way.  When he shows her the website he designed for her to help her sell her crafts, she realized that he’s the exact opposite of Çelebi.  She tells him he always calms her down, gives her strength and courage when they’re together.  It’s about time she realized what a great person Ozan is.

I disliked the scene where Tomris argues and hits Iskender in front of Atlas knowing how much Atlas loves him.  Not cool.  The little boy is already very traumatized and doesn’t need any more pain in his life.  He’s very attached to Iskender so Tomris will have to make accommodations and allow him to spend time with him even though she doesn’t want to.

Who is Iskender’s friend that he sees when he’s dealing with a traumatic situation?  She said they’ve known each other for 10 years after he saved her – how did he save her?

Why did Ömer's mother abandon him?  Has he tried to contact her or his sister?

What will Çelebi do after the accusations he faced at the mayor's announcement?  Will he punish Jemre and never let her see Gunesh again?

I have a bad feeling about Çiçek’s plan to destroy Iskender.  She discovers from Tomris that Şimal and Iskender's close relationship was because Şimal always forgave him whenever he did something wrong.  He knew she was the only person who always forgave him, so they had a very tight bond.  I believe Çiçek will use that against him and get him to trust her and ultimately ruin him.  I feel that her plan will eventually backfire if she gets too close to him and will end up hurting he