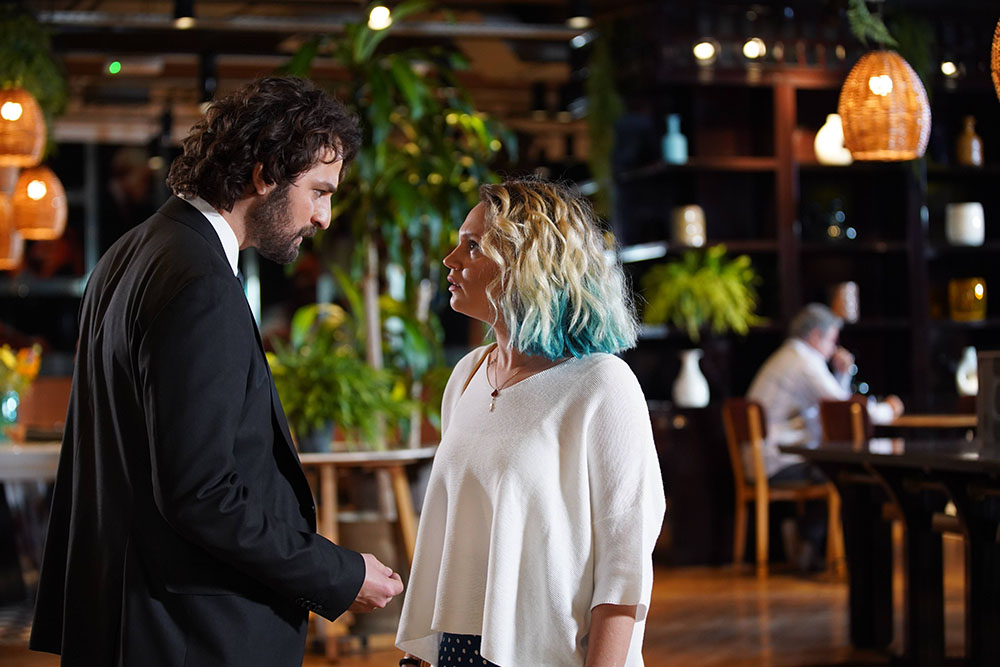 The following discussion contains spoilers from Episode 5 of Masumlar Apartmani.

The bomb that was expected to drop this episode, did not, until the very end of this bolum, when Safiye learned that Han and Inci were married. Unfortunately, the urgency with which Han and Inci previously saw their situation and hastily rushed to the altar seemed to fade as Memduh Bey’s edict to vacate the apartment building was swiftly overturned following Ege’s short-lived decision to live with his father, and Hikmet Bey’s heartfelt apology for Safiye’s behavior.

Although, Han and Inci secretly married to protect their love, they failed to consider how much they had concealed from one another. Inci admits to Esra that yes, Han is the love of her life, but ponders over what she really knows about him because she cannot recognize the man who angrily attempted to strangle her father, or the man who, without consulting her, proclaimed that she cannot work alongside her ex, and proceeded to secure a new position for her. She admits that a part of her feels safe and protected by his actions, but another part is acutely concerned. The trouble with Han’s love is that he believes it grants him the right to exert control over every part of her life. And, even though Esmat tells him that he should simply trust his wife, he is so desperate to keep Inci, the one bright light in his otherwise dim circumstances, beside him that he cannot even withstand her teasingly telling him that she may leave him. Though there are some charming scenes between these two throughout this episode, the weight of their secret nuptials and their untold personal histories cast a shadow over these lighthearted moments.

The appearance of Ege and Inci’s father adds a little more mystery to the story. Inci firmly believes that he murdered her mother, but Ege believes that his father inadvertently caused her mother’s death and has been repenting his actions every day since. Their father's presence and covert observation of Inci and Han at the cafe, followed by his surprise visit to Han’s office suggests that he has an agenda. It remains to be seen if he is sincerely seeking to reconnect with his children, if he wants revenge against Memduh Bey or if he is planning something entirely different.

The friendship between Ege and Neriman is blossoming beautifully. Their brief interaction, with him secretly giving her a piece of cake that Inci had made, and discussing the possibility of walking to school together, was heartwarming.

The fathers, Memduh Bey and Hikmet Bey, had a meaningful exchange, where both men bonded over the guilt they feel towards their daughters, with Hikmet Bey regretting his neglect and Memduh Bey regretting his overbearing ways. Unfortunately, these interactions were cut short due to the pronounced appearance of Hikmet Bey’s dementia, which prevented him from not only speaking to Memduh Bey about Han and Inci, but also recognizing Han as his son. This heartbreaking scene may help to thaw the ice between Han and Memduh Bey, who, despite his stated dislike of Han’s family, has bravely come to their aid twice already. It is surprising that there are no positive maternal figures in this dizi; or perhaps, the story is unfolding in this way, in part, to highlight the perils of growing up without much needed maternal care.

Now that Safiye knows that Han and Inci are married, it is only a matter of time before Memduh Bey learns of this fact and, more distressingly, learns of the number of lies that Inci has told him: the most recent one being that she had not received an award for radio hosting, but rather had gone on a honeymoon with Han. Though this reckoning may be brutal, Memduh Bey did declare that he wanted to change and wanted his grandchildren to be able to share their troubles with him. To his credit, he delivered on this intention, as he did not scold Ege for getting expelled from school, but rather helped him transfer to a new school. Inci’s lies and omissions will undoubtedly weigh more heavily upon him than Ege’s, but the uncompromisingly rigid Memduh Bey may be softening his outlook. Instead of feeling cast aside by Han and Inci’s marriage, he may feel more needed now than ever before as Inci will soon learn of the many wounds that have long been festering in the apartment suite above. I’m hopeful that the news of their gizli evilik will act as a catalyst for some positive change.