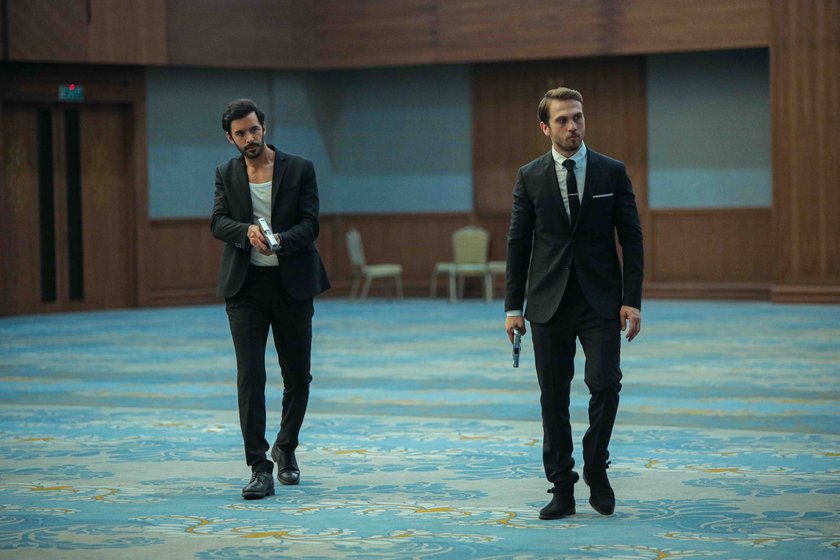 "Everything yours belongs to me. Even you belong to me!"

Cumali maybe shot Arık, but his father Cengiz already killed him with words. And not only words, with behavior, with not trusting him, with his habit to humiliate... when he was only supposed to love his son. What kind of pain this guy (Arık) is carrying within his soul? What kind of darkness was he dragged into?

Arık Böke Erdenet, our cheeky and fearless villain, from the moment he entered Çukur, earned our sincere sympathies. Now, we are saying goodbye to him, fully aware that he could give far more than just his obvious daddy-issues. Why?

Yes, we are aware that the dizi-scripts are constantly changing, influenced by many factors, but whatever the reason was for Barış' departure, it surely could have been done differently. Many believe that the character of Arık was not developed enough (which I agree with) and after so many teasers, posters, announcements with him as the main 'enemy', it is a bit of nonsense losing him just after 5 episodes. His role was totally suppressed (and ruined maybe) by the domination of the grande Cengiz Erdenet. He was not allowed enough space or time to present himself or his ability, leaving him with just - "Yes, father."

Connections with Efsun, apparent love story, nothing from that. All fall into the water. You won't be wrong if you say that Barış's talent was kind of wasted. Proving that he can handle this genre so well, we could enjoy so many action scenes of Arık and Yamaç, instead of saying goodbye... heh, if only some of penned the script :) But, it looks like Çukur is taking another surprising path...

"I will send you to your unborn child! Maybe you will meet there!"

It is not Efsun in question, but we still see a part of Arık's emotional side, right before his end. He dies sending some very important messages - there are more important things in his life than his father, and, the crucial one - his ability to love, unlike Cengiz. It is all about Şimşek (Lightning), Arık's favorite horse. Şimşek is a gift from his father, that Cengiz considers replaceable, but Arık is ready to set the world on fire and give his life for it.

After being stolen by Cumali, Arık takes Şimşek back, attacking and killing some of Çukur's people. Angry about what happened, Cumali goes again to Erdenet's property, but to set a trap for Arık - a phone call from his employee, saying that Cumali shot Şimşek and is waiting for him at one of the Çukur roofs. He grabbed the car keys, and the oranges showed the way...

On the roof - a relentless hail, and a rain symphony to wash away Arık's anger, believing he had lost his beloved Şimşek... and Cumali's pain from Arık's dirty and low blow - "I will send you to your unborn child! Maybe you will meet there!"... A numb face and a mechanical reaction of pulling his gun out, shooting Arık and getting his revenge from the Erdenets.

Many criticized Cumali for getting in a knives-fight with a gun. After those words, I am pretty sure Cumali was in a condition to rip out his heart with bare hands... Pulling the gun was just an unconscious, automatic response of putting end to this misery. However, Cumali's actions are totally legit. This was probably the lowest thing that we could hear from a person! Arık, Çukur's enemy, the face of evil. Or not?

It is hard to tame a wild horse, but it is worth the effort.

Is Cengiz in fact, the real face of evil?
Me, me, and me... then a ten empty spots, and then again - me, me, me. Me, the smartest. Me, the wisest. Me, the most important. All of you are just my toys, pawns, disposables. I mean, come on people, aren't you sick and tired of seeing Yamaç as such an inferior? I am. It's not fit for him at all.

Standing with an empty gun pointed at Cengiz's head, instead of the pleasure of killing him, Yamaç got a lecture about how clever and sharp-minded the old man is. Cengiz uses a perfect metaphor when talking about taming a wild horse. Yamaç was left to discover himself in that metaphor, now with the awareness that Cengiz is following and watching him everywhere and always a step ahead of him. After the meeting with his business partner Server, Cengiz sends Yamaç on a dangerous mission to follow his orders and kill Iskandar (as requested by Server), but with a warning that he will be held responsible if something happens to Arık.

My name is Reşit Feyzullah. I am Afghan...

In the background - the Afghan mafia bosses are back to the scene. On one side, there is Server Kırzai, a business partner of Cengiz Erdenet, who comes to Istanbul to prevent Iskandar from making a new business deal and becoming more powerful than him. Server asks Cengiz to help in killing Iskandar.
On another side, there is Iskandar Gülamşah, an ally of our good old friend Reşit Feyzullah, who comes to Istanbul in order to make a new partnership... guess with whom! - The mystery man!

Iskandar, aware that Server is going after him, asks Reşit for a favor; to convince Cengiz Erdenet to stay away from their businesses.
Obviously, the mystery man we are all looking forward to meeting is a great danger to Cengiz. Is this why he desperately needs Yamaç by his side?
... Reşit goes to Cengiz, but unexpectedly, sees Yamaç there. Confused whether he is working for the Erdenets or not, Reşit advises Yamaç to cut those strings and stop being part of Cengiz's dirty games. Again, with a warning that if something happens to Iskandar, Yamaç and Çukur will be held responsible along with Cengiz Erdenet.
It all falls to Yamaç's head now. Arık kills Iskandar, as promised, raising a serious problem between Yamaç and his good old ally Reşit Feyzullah. Does this mean a war with the Afghans? As trouble never comes alone, how will Cengiz behave when he learns that Cumali killed Arık?
Uh, Yamaç... a tough battle for you, abi! Maybe it is time to get the things in your hands again, but first... take off the suit!!

Vay, Yamaç bey, what would you like today? There is a Swedish table in the dining room, with a great variety of choices!

Salih and his original humor :))) Barefoot over thorns for his brother! To kill, to kidnap, to destroy the whole world, or simply to give comfort and support, Salih is here for whatever is needed. As he said - Yamaç is on a rollercoaster without being moved, and Salih is the only motion energy that keeps Yamaç alive.

If you can't be a footballer, you will be a backgammon champion!

So... Kahraman is far from just a womanizer, 'pavilion' guy. It took 3 seasons and a couple of meaningful flashback memories, to discover the caring side of his. Akın clearly remembers his love, the way he was treated, and motivated. Ayse recalls the reason for being attracted to Kahraman, with the lack of Selim's attention and care, and his constant wandering around, getting drunk. Meanwhile, Cumali recollects his reaction in mentioning their uncle Cumali, so the question rising is - did Kahraman already know the mystery of uncle Cumali's empty grave?

Kahraman was a wise person, indeed. What he knew, we are yet to discover, but talking about the family, he was probably one of the most caring Koçovalı. He would go perfectly along with Salih :) Oh, kız, don't go there, please! :)))

The demons of his conscience brought him to the edge of suicide, but Karaca pulls his hand back. Nevermind her real intention and what is she aiming for, she did help Akın to win a battle and pulled the trigger with the words - "I don't know what you did, but you can make it right by being next to the family, along with Çukur, sacrificing yourself just like me!"
With one battle won, Akın makes the first step, clearly showing his understanding that Yamaç is unjustly accused, and his will to help him. Maybe Salih is doubtful about Akın, but hearing him saying "Amca..." melted his heart, and made him accept Akın's offer.

I will no longer be a reason for anyone's suffering.

A bit of naive thinking by Efsun. According to her, she has legit reasons - avenging her father's death. She gave the money to Yücel without knowing what the money be used for. And now she has her calmed her conscience. Isn't this attitude a bit of disturbing?

As Akın tells her, like it or not, she has the blood of Idris Koçovalı on her hands. Going through all the ups and downs in the love story between her and Yamaç, I got the impression that she fell in love with him and deeply regretted all the things in the past. But... Efsun still strongly believes that she did the right thing! Then why is she so disturbed by the results?

Let me tell you, Efsuncim... you maybe did the right thing of avenging your father, but to the wrong people, in the wrong way. From the start to the latest happenings, Efsun reveals a kind of superficiality in her character. And a bit of a contradictory one as well. She knows that Yamaç did not kill her father, but she feels no regret for killing Yamaç's father because, at that time, she thought he was guilty! Oh my! However, you spin the story, Efsun must be innocent!

Okay, she saved Yamaç a couple of times, showed her love indeed. She's gone even further to sacrifice the woman who raised her, taking her life with her own hands... a tribute to that.

But from all associates in Idris's death, Akın is the only one showing sincere regret and remorse! Love did not save Azer, but will it save Efsun? Only time will tell. Maybe Yamaç will forgive her, but will the destiny do the same?

Because he loves me, right?

Through the confusing 'lost and found' memories of Emmi, Selim finally realizes that Idris was not the father he thought he is. Something was wrong in Selim's behavior, and there was obviously something eating him alive, since the day his son Akın was born. Idris noticed that and indeed worried about his son, but Selim never paid attention to it, convinced that his father does not love him. Now, Idris is gone, but Selim reveals his caring, father's side from Emmi's recollections.

Selim has the ability to be an awesome brother like Salih. Patient and kind, he is not scared of showing emotions. Will this be the trigger of seeing Selim in another light?

Selim, you are not just a 'side-player'. You are an important part of the family, and we really need you!

We are on an irreversible road. It looks like we are on the doorstep –– to hell. What comes next while everything falls apart, burning in flames?

Indeed, life gives you lemons, Yamaç... so, make a lemonade, abi! Save the oranges for the enemies...